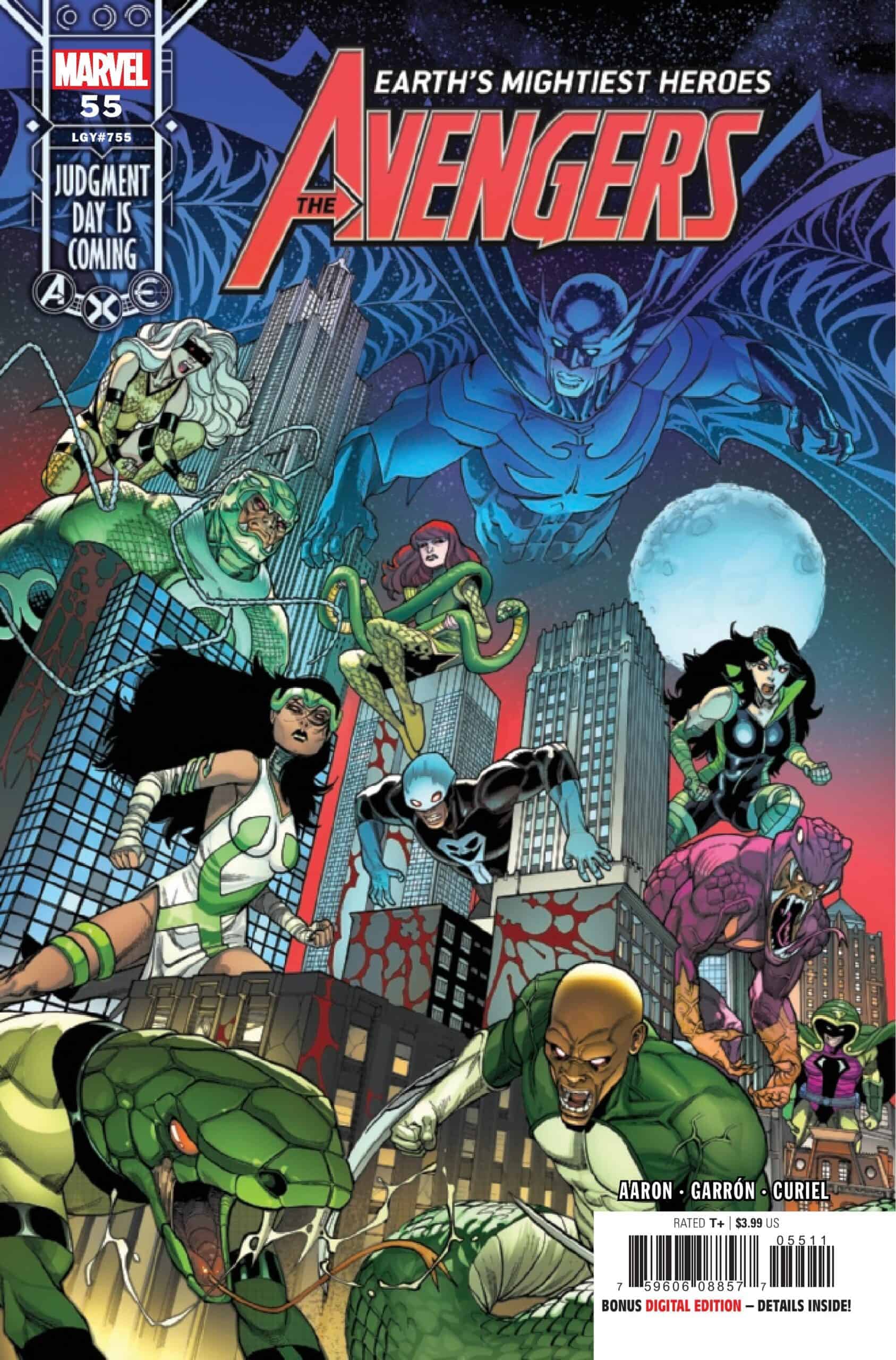 THE COMING OF THE NIGHTHAWK! Last seen during the events of HEROES REBORN, Nighthawk of the Squadron Supreme of America returns to the scene with a dark and mysterious purpose. Is he friend or foe to the Avengers? Nobody’s sure. But there are no such questions about the deadly new incarnation of the Serpent Society!

The issue opens with a conversation between Black Panther and Nighthawk. While I’m not super familiar with Nighthawk or the Squadron Supreme, it was great seeing two Black men bond in a title that has historically been predominantly white. 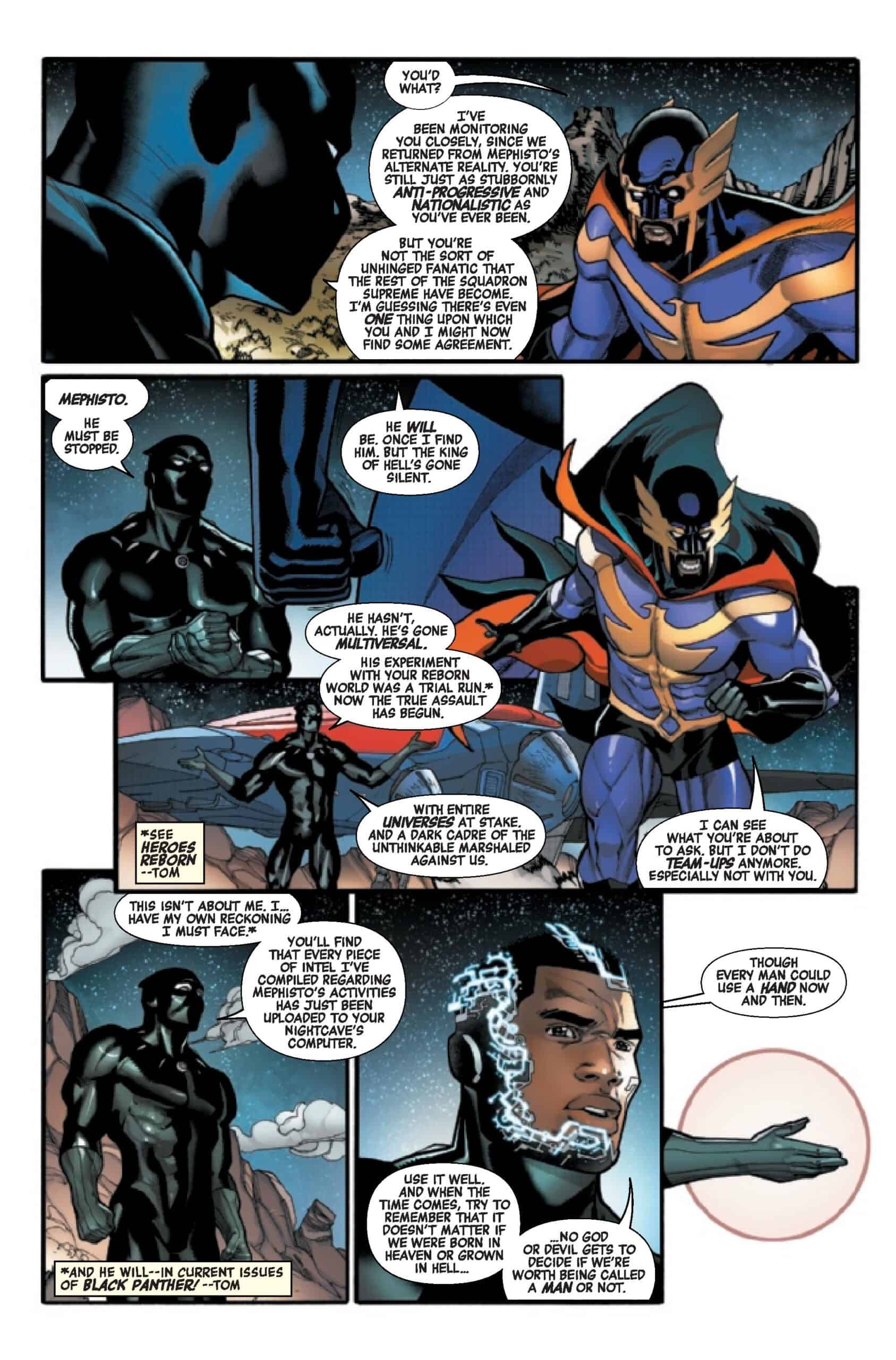 Even though I don’t know much about Nighthawk, I know heaps about the villains of the issue: the Serpent Society! Beloved by fans of Mark Gruenwald’s Captain America run in the 1980s, the Serpent Society is a band of mercenaries and assassins who utilize teamwork and camaraderie in the hustling world of costumed criminals. Gruenwald put so much personality into these criminals, from the romantic relationship between Sidewinder and Black Mamba to the unabashed unfemininity of Anaconda to Princess Python’s insecurities. The team has also been one of the most diverse and varied villain groups out there, with several women and POC rounding out the team. 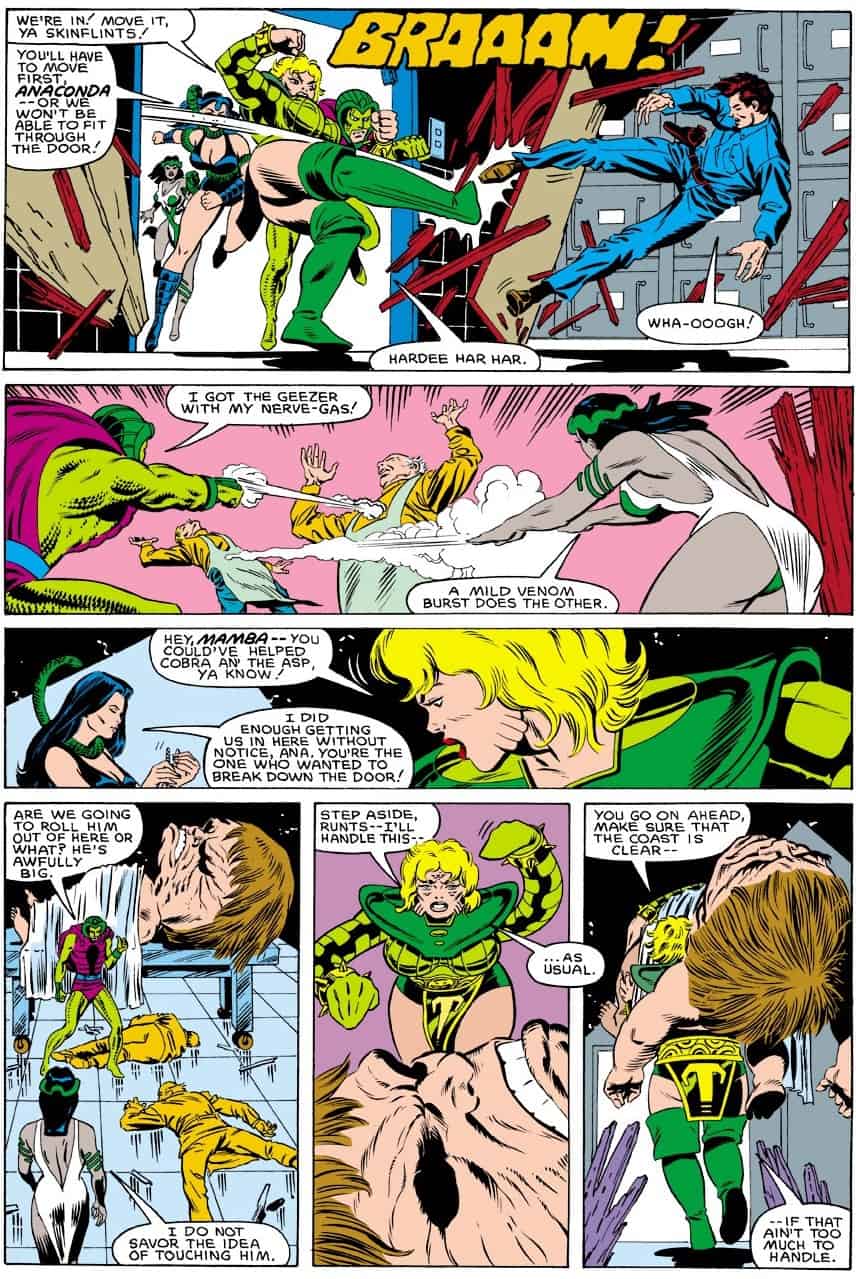 Unfortunately, ever since Mark Gruenwald’s passing, the Serpent Society hasn’t been treated with as much respect. They’re often thrown into events as “opening villains” with very little of the personalities and relationships they once had. For example, Princess Python’s cowardice had her exiled from the Society, yet she continues to pop up with the group. While Jason Aaron’s use of the Serpent Society in Avengers #55 is a bit muddled, they are given some interesting development as they become unwilling servants to Mephisto.

In this issue, Mephisto has corrupted the organization (although a few members like Black Racer and Boomslang are missing), forcing the Society to go on a murderous rampage throughout their Serpent Solutions building. I felt bad for these civilians, and I’m never a fan of mass murder for shock value. I’m hoping that after they regain their senses, we’re able to see the Serpent Society’s reactions (but I’m betting we won’t). As Captain Marvel points out, the Serpent Society has never been known for mass carnage. 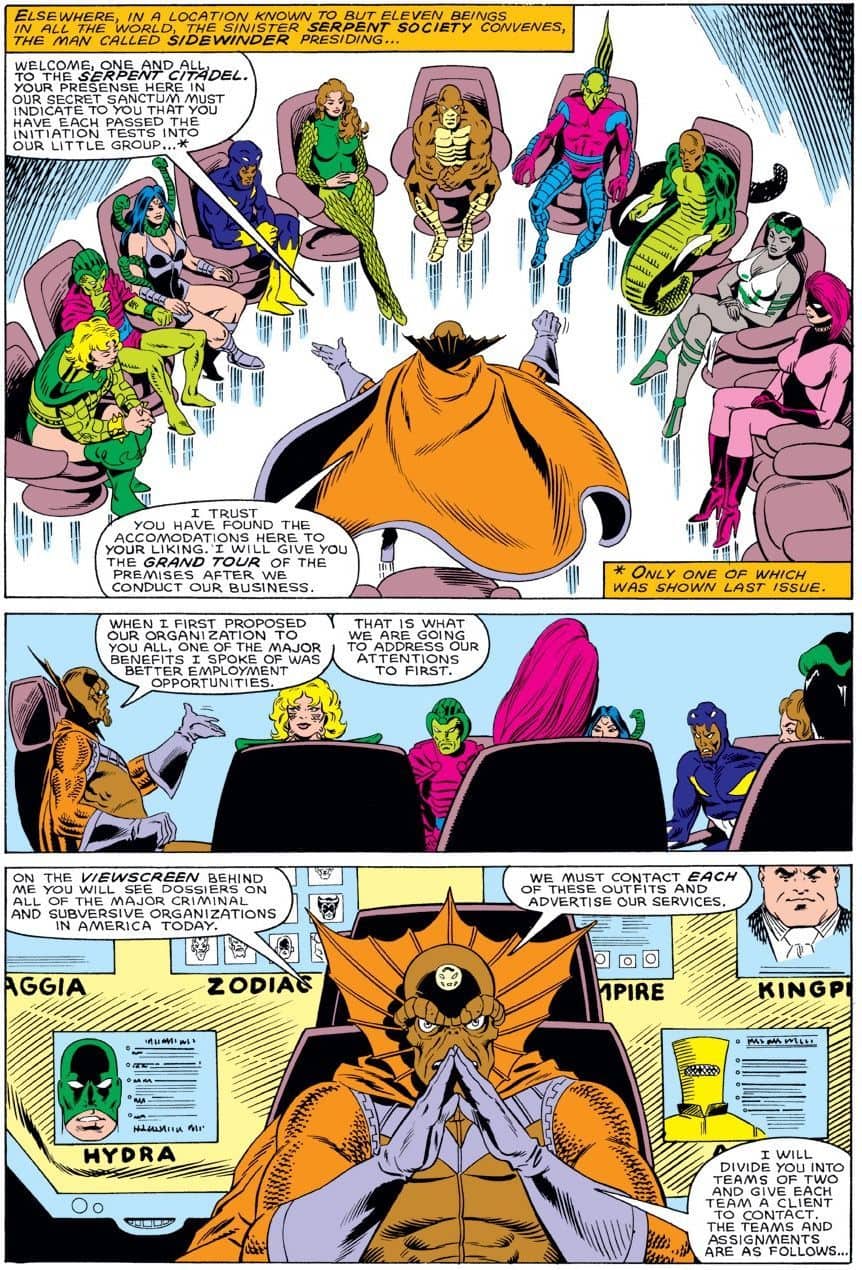 One of the Serpent Society’s first missions, from Captain America #311.

Nighthawk manages to defeat the group, but they manage to escape and go on another killing spree. Will they appear next issue? I doubt it, but I hope there is some resolution to this. As for Mephisto, he’s another character I’ve had little interest in over the years (apparently I have niche tastes, I’m discovering), but I’m interested to see where he goes from here. There’s a fantastic double-page spread of dozens of demons and devils with such varied designs. Major props to artist Javier Garrón. I’m not sure if all of those devils are pre-existing characters, but if not Garrón did an amazing job creating an array of character designs ranging from horrific to high camp. I also enjoyed Garrón’s take on the Serpent Society, though Rattler has clearly been hitting the gym to get full-blown Chad. I’m reminded of that time Diamondback mentioned Rattler being good in bed (due to his vibrating tail) to Fer-de-Lance. Oh, Gruenwald.

I’d be remiss if I didn’t mention the lovely final page dedicated to George Pérez, a pioneer of comics and a hugely influential creator. His revitalization of Wonder Woman in the 1980s is a personal favorite of mine, but he’s also had beloved runs on Teen Titans, Fantastic Four, and Avengers. You’re a legend, George.

As a Serpent Society superfan, I enjoyed the issue. Javier Garrón absolutely kills the art with a fantastic double-page spread that blew me away. And those butts... get Garrón on Nightwing immediately!