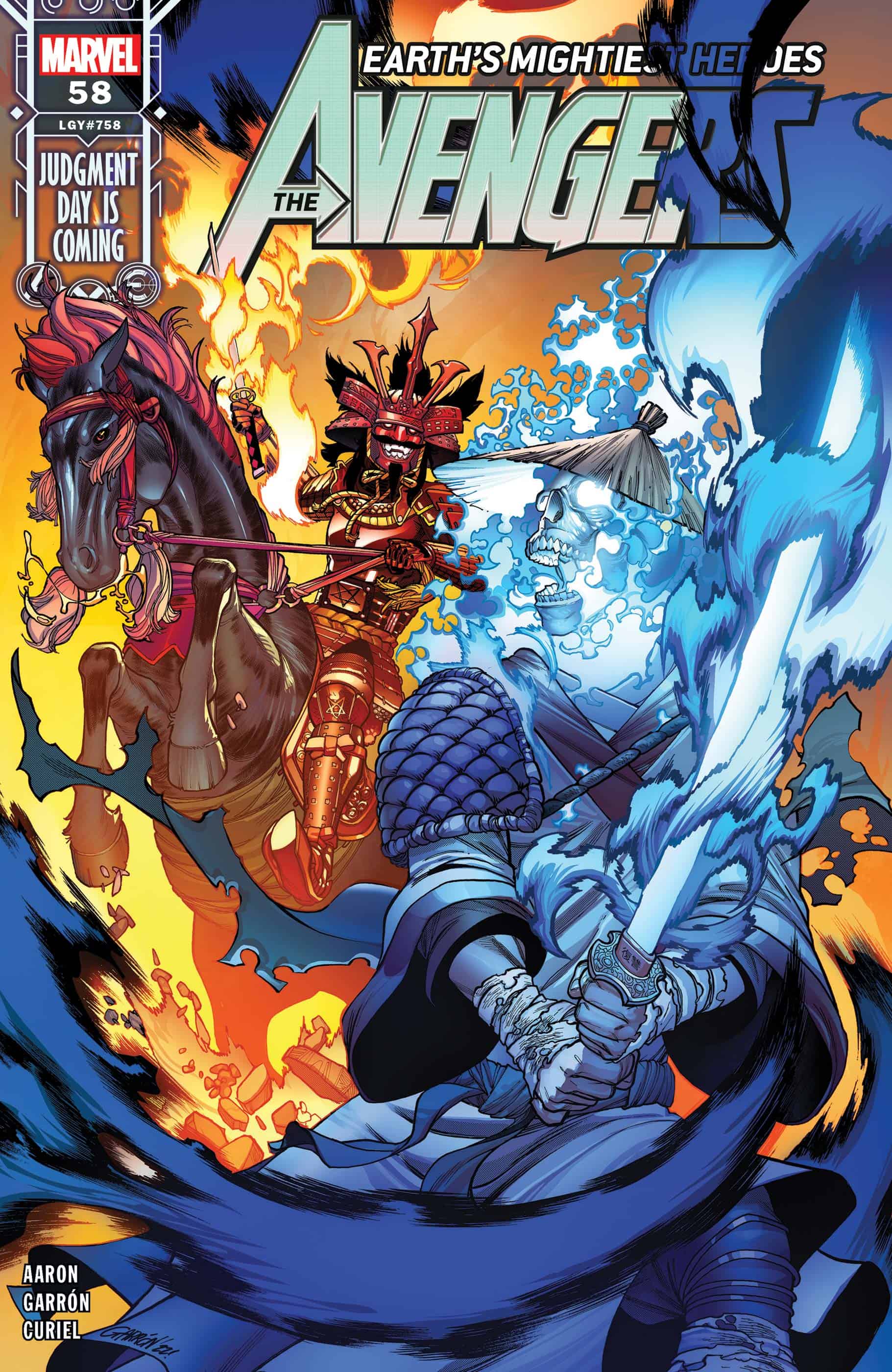 The demon Mephisto has been bedeviling the Avengers across all of time and the Multiverse. Mephisto has also formed his own vast Council of Red, made up of variant versions of himself, to further his fiendish plans. The Avengers have been traveling through time to protect their heroic brethren in the past from Mephisto’s attacks.

In the spirit of total transparency, I begin this review by confessing a personal bias; being that I have always and will always find the samurai of feudal Japan irresistibly cool. Perhaps it is for this reason and this reason alone that Avengers #58 feels like a marginal improvement over the previous issue. That, coupled with the fact that its titular heroes are graciously given lines of dialogue this month, of course. The change in scenery certainly does wonders as the gritty war-ravaged Pacific is replaced by the pristine forests of Edo-period Japan. It’s a setting that holds unlimited potential for both gentle beauty and deadly action, and artist Javier Garron knows how to make proper use of both.

Flower petals rain down from tree branches through which the ghostly light of a massive moon shines through. A flurry of snow blankets the ground before quickly becoming stained with red, the product of some genuinely impressive sword battles. A humble village sits beneath a star-filled sky, sandwiched between a serene ocean and gargantuan mountains. Every environment is made all the more marvelous when framed behind the Ghost Ronin, who is undoubtedly the best of these historical avengers that Jason Aaron continues to retroactively place along the 616 timeline. 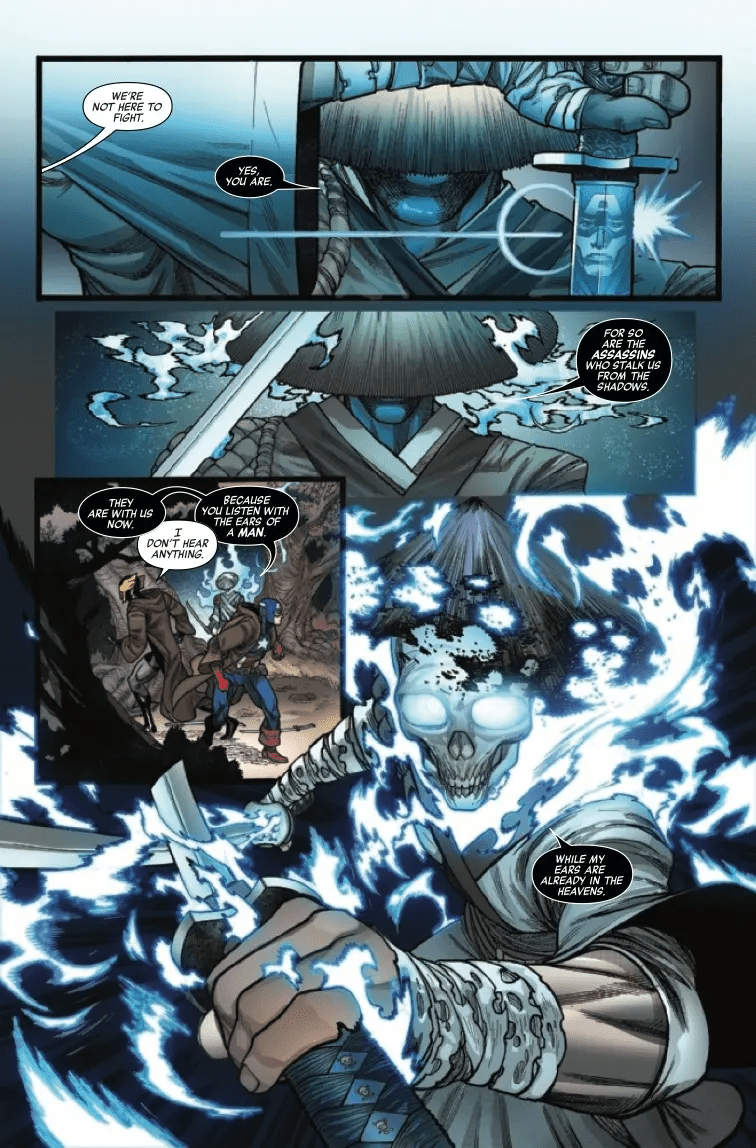 While his descendant, Ghost Rider, is a character closely associated with the chaos and fiery wrath of hell, the Ghost Ronin is presented as wise, calm, and collected. He kills not with vengeance-fueled brutality, but a humble desire to fulfill his moral duty and defend the innocent. This drastic difference in demeanor is well implied through his design, as the flames on his skull burn an icy blue rather than an angry red. The Ronin is an honestly clever take on a beloved character, and Aaron clearly knows this, as he uses the entire issue to convince readers of how amazing his creation is. His efforts may have been more successful had he given the Ghost Ronin any personality beyond being the strong, silent type. As it is, he reads like the familiar stereotype of a samurai who speaks only in vaguely worded pieces of wisdom. Javier Garron really does the heavy lifting in making Ghost Ronin a compelling character, drawing feats of combat that establish him as a forced to be reckoned with.

Regarding the narrative, Avengers still struggles to find its footing with this time-travel arc, especially when it comes to character interactions. There are some amusing bits of banter between unconventional pairings like Captain America and Nighthawk or Namor and Echo. The only semblance of drama concerns events that took place during Enter the Phoenix, one of Aaron’s previous story arcs, rather than the current mission. Still, these are at least morsels of interpersonal conflict that remind you of happier times when the Avengers truly embraced soap opera antics. Aaron has more fun with the possibilities of time travel, making his samurai face off against a biker gang and a ship full of Vikings. The team continues to serve a passive role in the story, as nothing they do is of any assistance to Ghost Ronin, and at no point do you ever feel that Mephisto poses a real threat to him. You know that there is a serious problem when even the characters themselves are questioning why they’re here and what they’re supposed to be doing. It was not until the penultimate page, when the entire Avengers squad is drawn together in one panel, that I recalled how the large the current roster is, and how a third of them are practically reduced to cameos.

The book is beginning to fall into the predictable rhythm of a Saturday morning cartoon. The dastardly Mephisto even rides by the Avengers to taunt them like some sort of Scooby-Doo villain. While I still hold my stance that issue #58 is an improvement over last month, the writing still fails to match the quality of the magnificent art which has carried the comic this far.

Avengers #58 may win fans over with the introduction of an epic new character, but it's narrative continues to move at a snail's pace, making it difficult to remain invested.