Avengers #59: The Good, The Bad And The Ugly 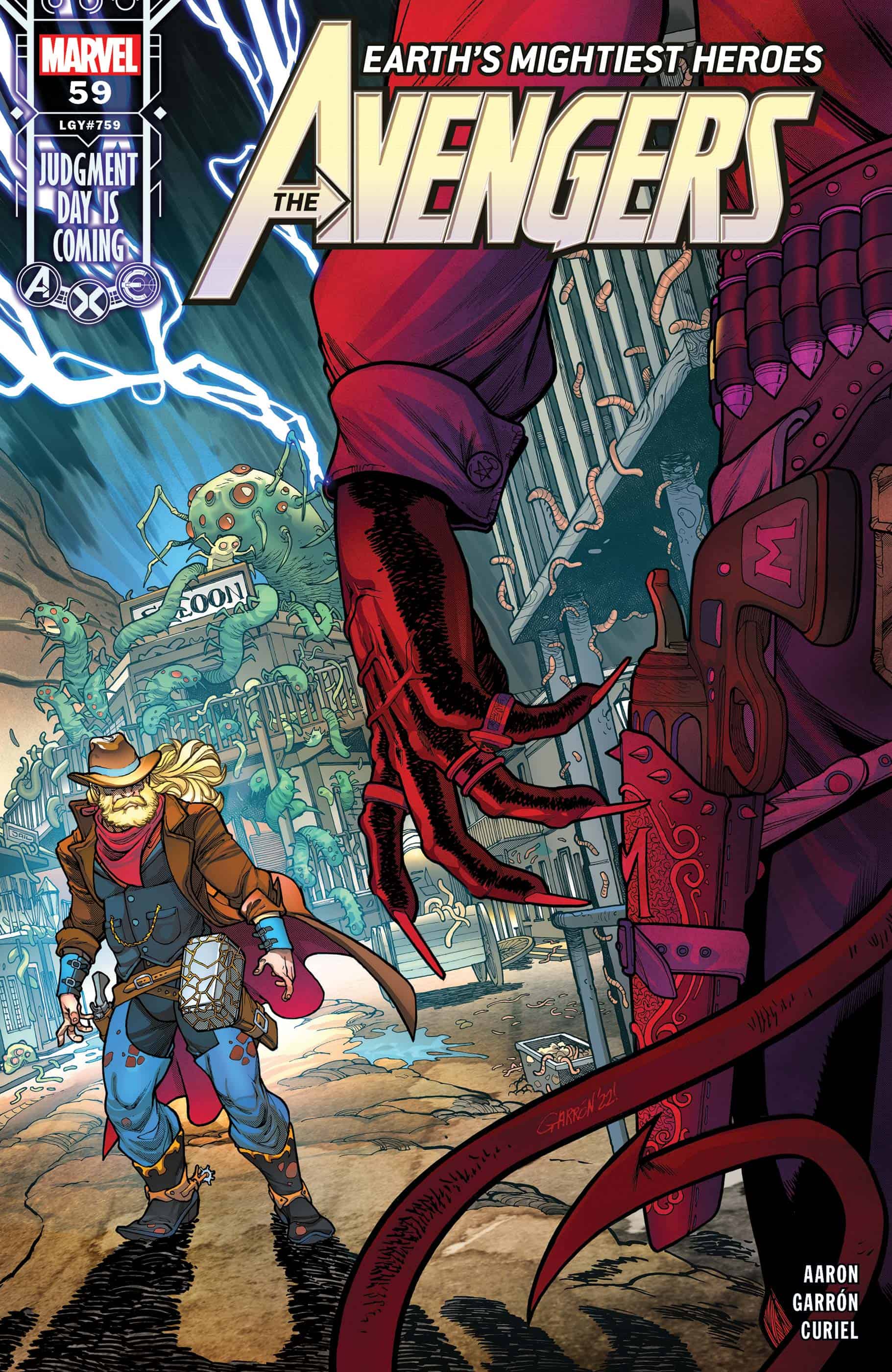 The demon Mephisto has been bedeviling the Avengers, traveling through time in an effort to unravel their history. The Avengers have embarked on their own journey through time, seeking to protect the very first Avengers in the prehistoric past. The team’s pursuit of Mephisto has thus far led them to various periods of history where they have been aided by their heroic predecessors.

One of the more tiring aspects of this current Avengers storyline is its inability to live up to the allure of artists Javier Garron’s and David Curiel’s covers. Make no mistake, I’m well aware that covers exist for the sole purpose of reeling in readers with whatever manipulative tactics necessary. In fact, it would be fair to say that false advertisement has been the backbone of the comic industry for the past few decades. This would make it incredibly unfair for me to cite a misleading cover as a legitimate criticism against Avengers #59, but the sense that I have been cheated out of something great remains. Anyone hoping to see Thor rock chaps, spurs, and a 10-gallon hat as he duels bandito Mephisto at high noon is sore out of luck. And for fans of kaiju and similar monsters, I’m sorry to say that you won’t have the privilege of watching giant green worms devour a saloon.

The absence of these things may seem trivial, but they speak to the larger issue at hand, being that Jason Aaron has crafted a time-travel adventure nearly devoid of fun. The intrigue of any good trek through history is the fish-out-of-water element that comes with modern characters struggling to adjust to an unfamiliar world. Aaron has plotted each issue of this seemingly never-ending arc with such speed and impatience that he deprives himself of the chance to exploit each setting’s full potential. Tony Stark doesn’t get to build an armored suit out of covered wagons and a steam engine, that would simply be too creative. The fraction of the Avengers team lucky enough to be squeezed into this issue are not given the time to explore the Wild West before they’re dragged along to the next era. 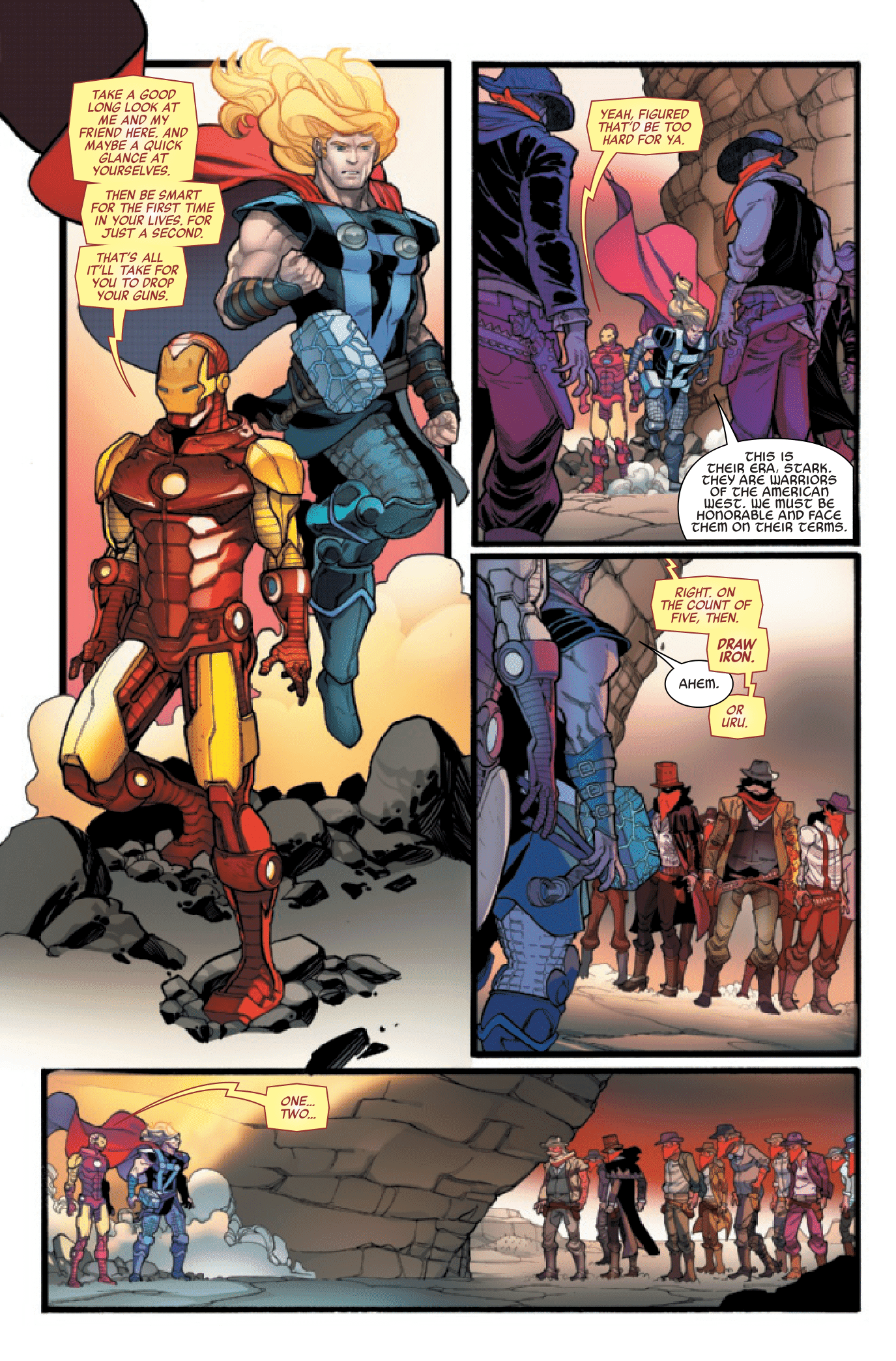 Issue #59 introduces a duo of cowboy vigilantes named Reno Phoenix and the Starbrand Kid as they race across the desert to hijack a flying Shi’ar train loaded with abducted humans. If there is one thing to appreciate, it would be this morsel of worldbuilding establishing that the Shi’ar empire has been visiting Earth long before it’s iconic encounters with the X-men. Ranking them alongside Aaron’s other creations, the duo proves to be the least interesting of the historical Avengers with Starbrand Kid in particular falling extremely flat, not having much to him beside some cool guns. Reno Phoenix at the very least has a compelling and tragic backstory that may or may not be expanded upon should her existence ever be acknowledged again. Reno’s and Starbrand’s adventure quickly falls into the same old formula: Mephisto appears and minorly inconveniences them, they fight off demons with minimal help from the avengers, and nothing of substance occurs. Aaron clumsily splits panel time between new and old characters in a way that robs everyone of the proper focus they deserve.

As Avengers grows more and more repetitive, I find myself with less to say. Not once throughout this arc has Mephisto felt like an intimidating villain because our heroes repeatedly defeat him and his minions with the same level of ease as you would swat away flies. It’s hard to imagine how a storyline with no believable stakes or tension will build towards a satisfying conclusion, but at this point an ending of any quality will be enough for me.

Impatient pacing and shallow characters make this issue of Avengers a rather unsatisfying wild west adventure.

Avengers #59: The Good, The Bad And The Ugly