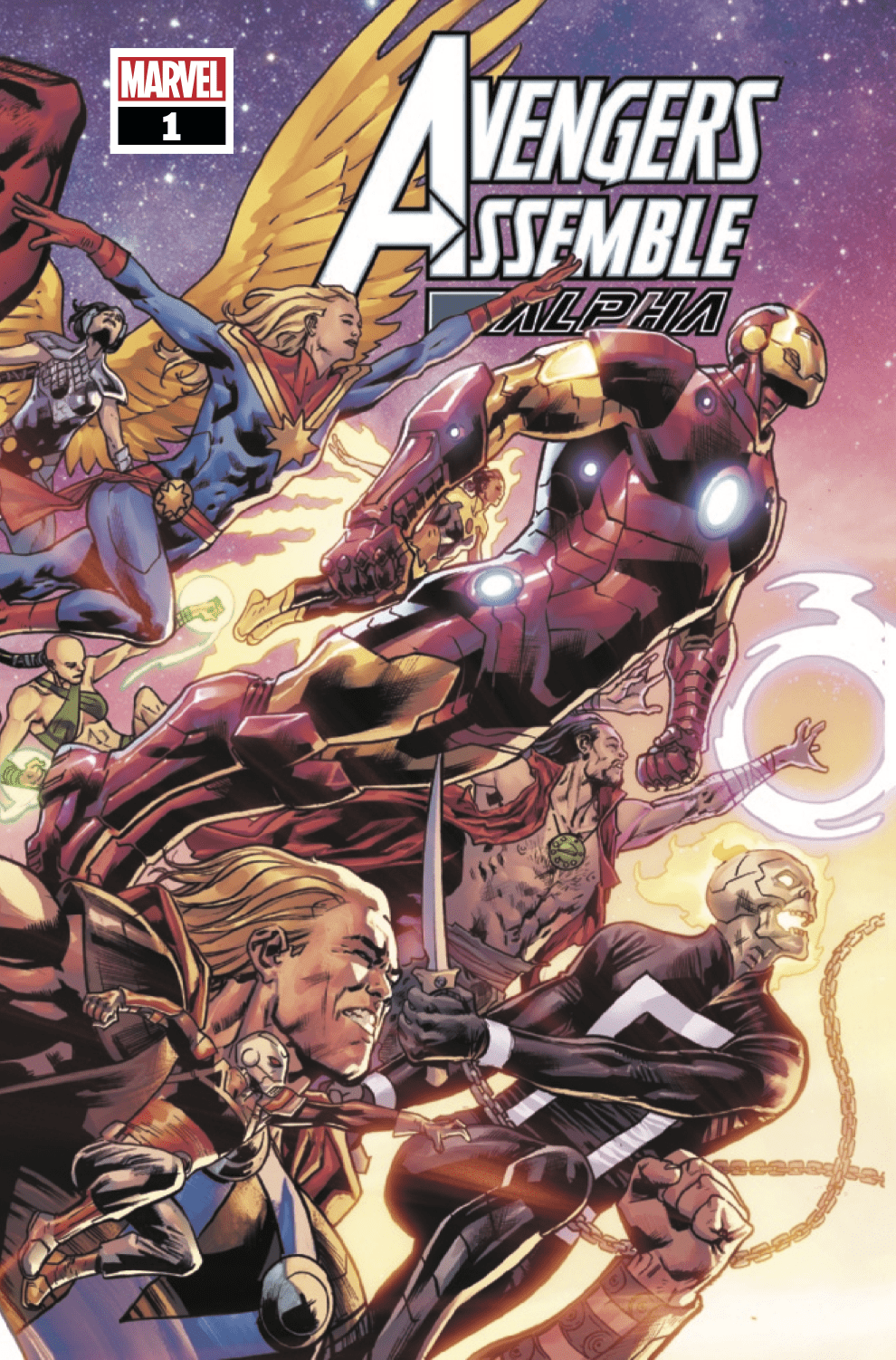 The demon Mephisto has been bedeviling the Avengers of Earth-616, traveling through time in an effort to unravel their history. The Avengers embarked on their own journey through time, seeking to protect the very first Avengers in the prehistoric past. After exerting her powers and thereby accelerating her aging, the now elderly Starbrand was able to finally send herself and the team to the needed prehistoric genesis point.

Avengers and its multiversal counterpart Avengers Forever converge this week with a whopping 48-page-long issue kicking off the third act of these two ongoing series’ storylines. This double-sized adventure makes quite the introduction with a fabulously grim two-page spread.

Bryan Hitch, whose recent artwork on Venom has never failed to impress, brings a similar Lovecraftian influence when rendering a cosmic location bounding with imagination. The “God Quarry,” as it is dubbed by opening narration, makes for a striking opening visual with an impressive sense of scale and perspective that brings to mind the classic works of Jack Kirby. The image of an endless cavern formed from the gnashing maws and frozen limbs of deceased gods draws some clear inspiration from Kirby’s source wall while still doing much to distinguish itself. Several of the enigmatic celestial corpses even bear a resemblance to New Gods, while others are most likely cameos meant to be enjoyed by fans much more knowledgeable than me. 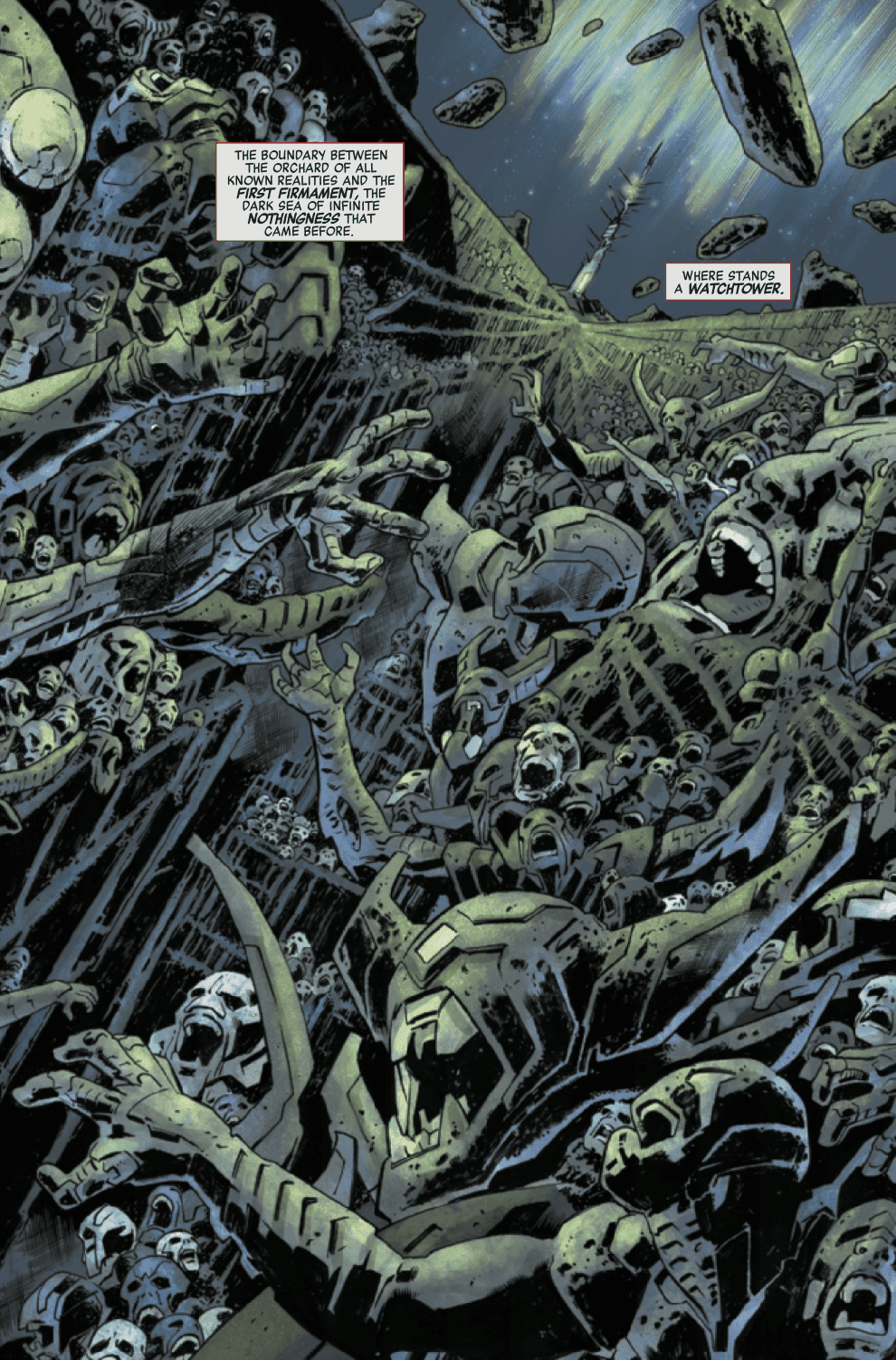 The grandiose nature of this introduction creates certain expectations that the rest of the issue never meets. It is unfortunate given the immense build-up to this fateful meeting between two generations of Avengers. For months, we bore witness to our team traversing century after century, occasionally slingshoting back to the dawn of man to foreshadow the inevitable encounter with their prehistoric counterparts. What better way to pay off all that anticipation than with a contrived and inconsequential battle?

Another hero versus hero skirmish on its own is enough to induce eye-rolls, and the somewhat stale execution of the action certainly does not help. Perhaps the twenty-or-so heroes present spread his focus too thin, for even the quality of Bryan Hitch’s artwork falters a bit during this bloated sequence. Characters and their poses come across as stiff and static, depriving their combat of the dynamic energy necessary to make it impactful. He still shines brightly when it comes to penciling the raging, prehistoric Starbrand in all his ferocious glory. There is a bizarre moment of body horror with said character that perfectly rides the line between comical slapstick and genuine grotesqueness.

This petty scuffle eats up the page count, and, by the end of it, a simple misunderstanding has left both teams of Avengers unconscious, leaving the two main villains free to unite and accomplish who-knows-what. I suppose this is meant to be the dark point of the story, where our heroes are left to lick their wounds as the villain gains the upper hand. But with Mephisto being such a passive enemy up until now, to the point where the heroes had to foolishly incapacitate themselves in order for him to gain the advantage, the entire scenario just lacks weight.

Avengers Assemble #1 is a slow and rather rough start to what is meant to be the epic conclusion of the Avengers' current era, stretching a cliché hero versus hero fight to an unnecessary length.