Avengers Forever #9: Always, I wanna be with you, and make believe with you 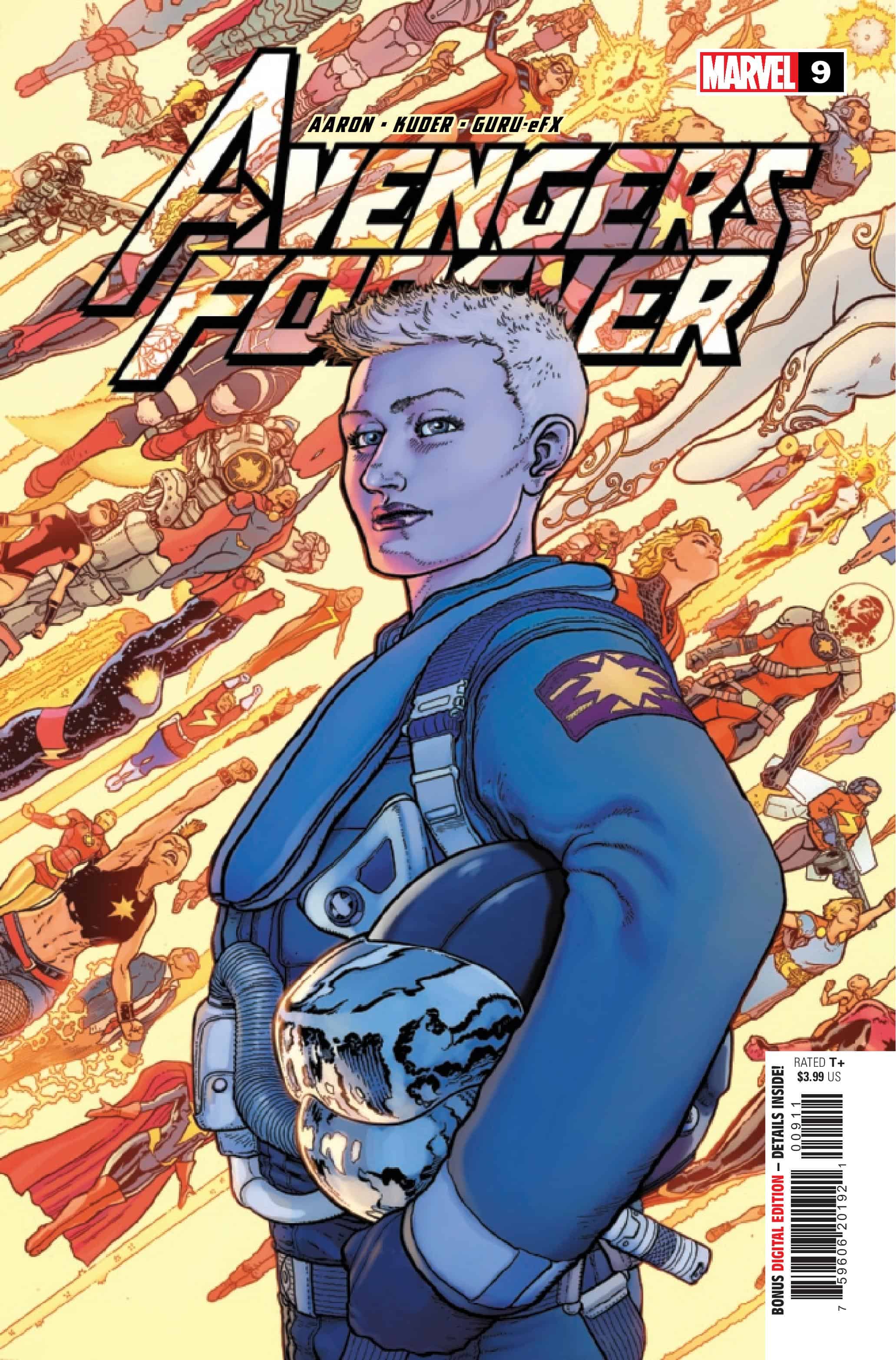 CALL IN THE CORPS! Earths lay in ruin all across the Multiverse. Avengers are assembling from every corner of creation as never before, knowing that the war of all wars is looming. And when there's war, you know it's time to call in the Corps. The most hard-hitting special ops squadron of elite high fliers and photon-armed commandos ever called to service. The Carol Corps.

It’s the ninth issue of this series dedicated to the Avengers of the Multiverse, and this issue is dedicated to a Carol Danvers stuck on a world where they’re a monotheistic society of humans, and animal-esque people (think Bedknobs & Broomsticks Island of Naboombou, and the creatures who lived there). Everyone belonged to the church of Hellfire, and they worship the Dark Phoenix. Yes, Jason Aaron found a new way to mess with the Phoenix concept. I really wish he wouldn’t at this time.

Danvers is a slave in this clogged planet, who dreams of flying every night. The world is her playground, the metaphorical and literal chains no longer inhibit her, and she is finally free, only to wake up to the nightmare that is her existence. She knows these aren’t just dreams, but memories from her variants in the multiverse. One day she wakes up only to realize that her dreams of flying come true. She sets off and begins to liberate her world as only Carol could. It’s a bloody battle, but in the end Robbie, and his Avengers of the Multiverse arrive and bring this version of Carol into the fold, and a new member of the Carol Corps.

Okay, so I’ve been very critical of Jason Aaron’s Avengers run. Aaron’s run started off relatively decent, but after the event, War of the Realms, he’s slowly been on a downward trend, in terms of quality. We had a few interesting gems, like his work with the Winter Guard, and his development of these often neglected characters, as well as the Squadron Supreme of America, but it was hampered by rather pedestrian things like the Moon Knight arc, the arc where Echo becomes the host of the Phoenix, as well as the prehistoric host of the Phoenix being the real mother of Thor, his run is now being run over by just a lot of schlock, and things just don’t seem to be getting better as time moves on.

After World War She-Hulk, (probably the best story he’s had in years), he gave us the Multiversal Masters of Doom. Aaron laid out the premise for this book, and it’s an interesting premise at that, unfortunately as with many of his arcs, the premise is there, but the execution can be seen as profoundly lacking, mostly due to Aaron’s lackadaisical use of continuity, and overuse, and abuse, of said continuity (someone please save the Phoenix from him). The Multiversal Masters arc showed a lot of potential for the new Forever title, so I gave it a go.

The series isn’t bad, and Aaron has some pretty decent ideas for some of these other universes he’s taking us to, but the execution falls flat from time to time. Still, I’m enjoying the book for what it is. The biggest highlight here is Aaron Kuder’s art. Kuder has been a rising star for about a decade, and hit it big when he became one of Marvel’s Young Guns class in 2018, but has bounced around from title to title, never really having a home, until now. I’m really impressed with Kuder here. He’s getting the chance to go wild, and is giving us some really great stuff to work with. Hopefully this team will keep up the level of quality as established as we make our way to the end of Aaron’s run on the franchise next year.

With a little bit of this, and a little bit of that, and a new member of the Carol Corps. The two Aaron’s are creating a whole host of new universes, and adding a lot of fun to the stew. Jason Aaron seems to work best when his work isn’t going up against previously established continuity, meanwhile Aaron Kuder’s dishing out a lot of great new designs for some familiar faces.

Avengers Forever #9: Always, I wanna be with you, and make believe with you