Avengers: No Road Home #4: To The Victor Go the Spoils 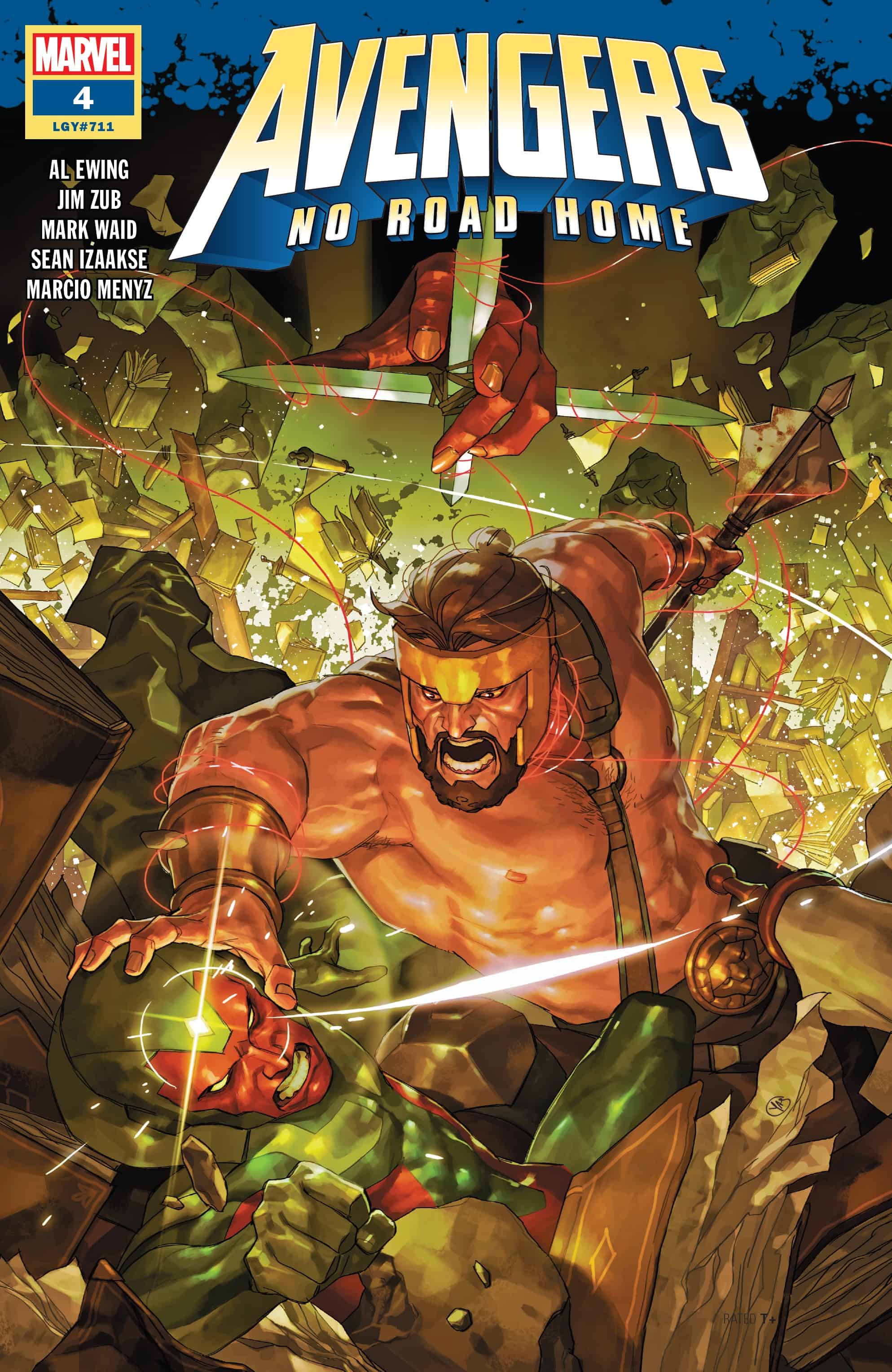 Nyx begins to make her move as the heroes split up to stop her. But with Hercules as her puppet the Avengers have more to contend with than the Olympian goddess of Night and her Children. All seems lost for one half of the team in Omnipotence City, as Nyx gains one shard of her soul named 'the Night that Was'. But just as her son Hypnos brings down the walls of the Realm of Nightmare for the second piece, help arrives in a most unusual form. 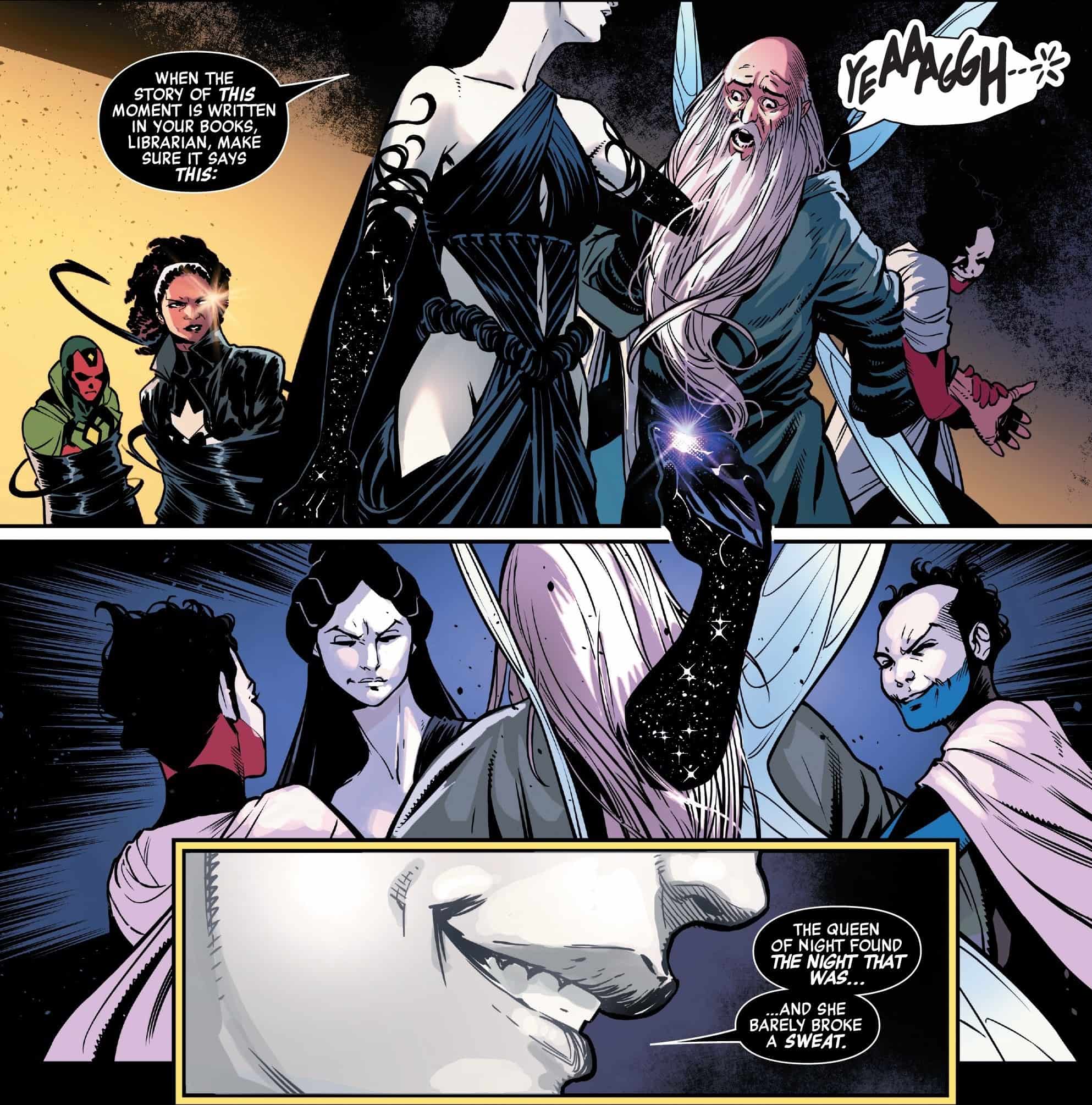 The storyteller, or Shaman. Traditionally speaking, the seer is the one with all the power within the tribe. Each issue has been narrated by a different person, each giving a unique voice in the unfolding story. First we had Voyager, who was of course the cause of the whole thing, indirectly this time. Then Hawkeye, the victim of doubt who gave rise to the driving force of the first act of the story. Last up was Rocket, the only one capable of seeing through Nightmare’s shambolic show of power. And now the villain of the piece Nyx gets her say. And how telling this is.

The story so far has shown the Gods of Olympus in a wondrous light as the heroes of the piece. And as we have always known, history is written by the victors. And so Nyx asks a pertinent question here, what of her role in the saga? What of her kith and kin? Here we finally realise the motivation for her quest. And in relating her pain and anguish in such a poetically verbose fashion she has not only given the story its title, she has also fleshed out her motivation and made it almost seem just. As Zeus decrees her torment and banishes her and her family, she feels utterly wronged. And there can be no better motivator than the need for justice and vengeance. 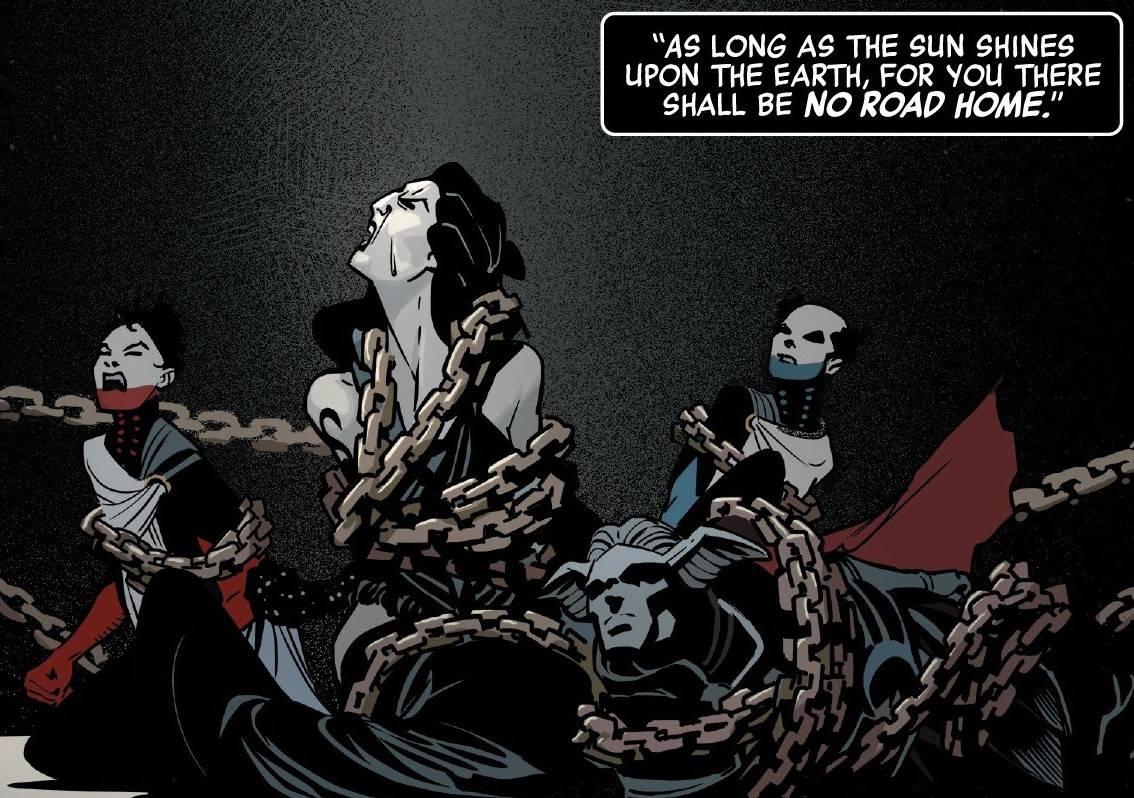 Speaking of story tellers, our three writers are blended together perfectly here, in a well paced story with a unique chorus that shares with us a worthy vision (no pun) relating the clash of titanic proportions. Okay there may have been a teensy one there. Also a very edgy twist having Wanda play the chink in the enemies armor. She was initially subverted to bear silent witness and serve as the eyes of Nyx. And ever the fly in the ointment she manages here to turn the tables, realising the very weapon she had been played as could be the one way to gain the advantage. But the most interesting part for me this whole issue is the telling of the origins of the Children of Darkness. 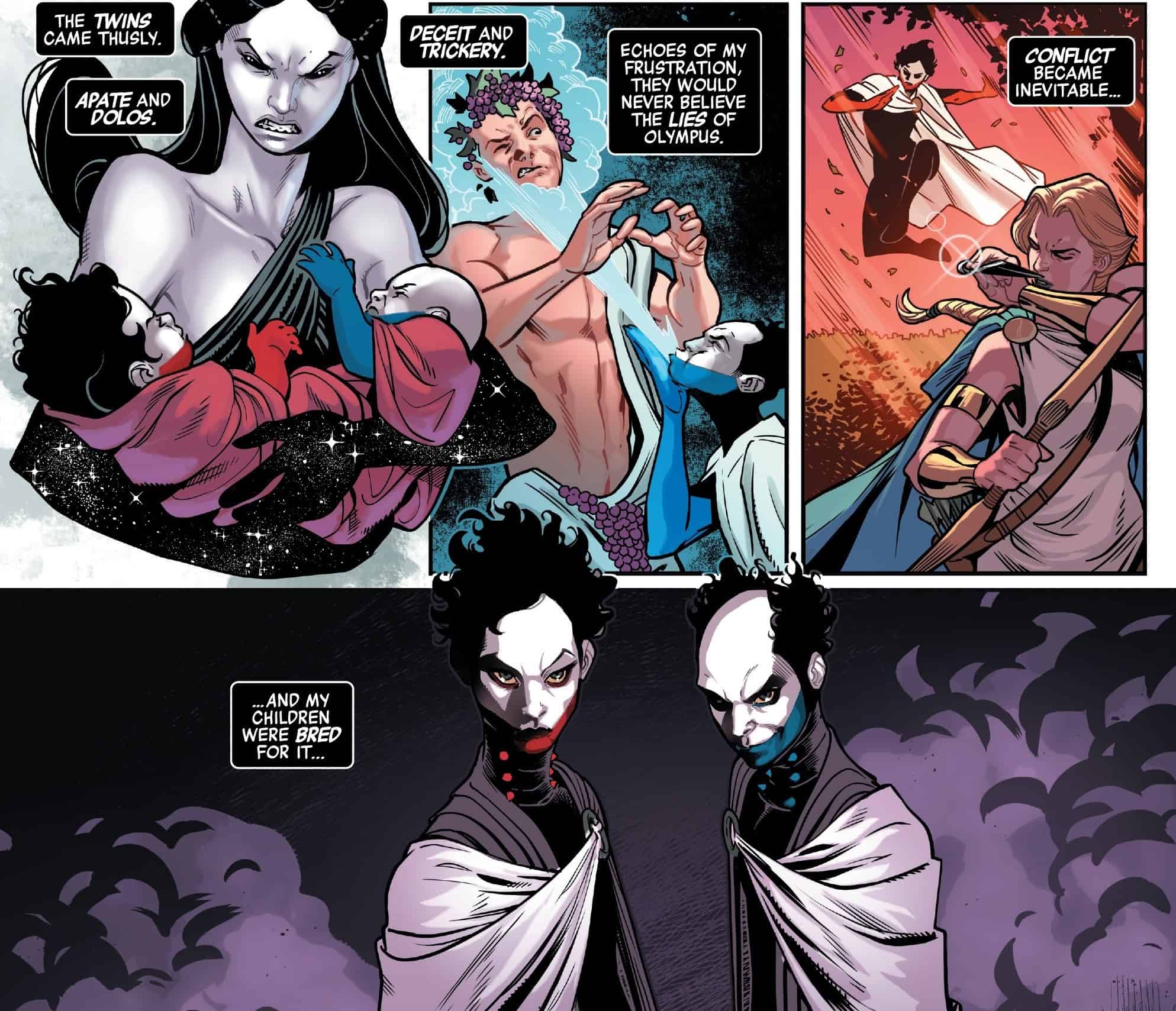 Even the sidereal characters manage to get a voice here too. Who hasn’t had that dream where there is some huge cataclysmic event going on and you feel blessed to be a part of the action? It is almost like being in a movie and watching at the same time. As such the dreamers perception of the underlying theme is enlightened here, as well as spot on accurate and pinpoints how we all think in our dreams. And we have a ringside seat, right there with them. 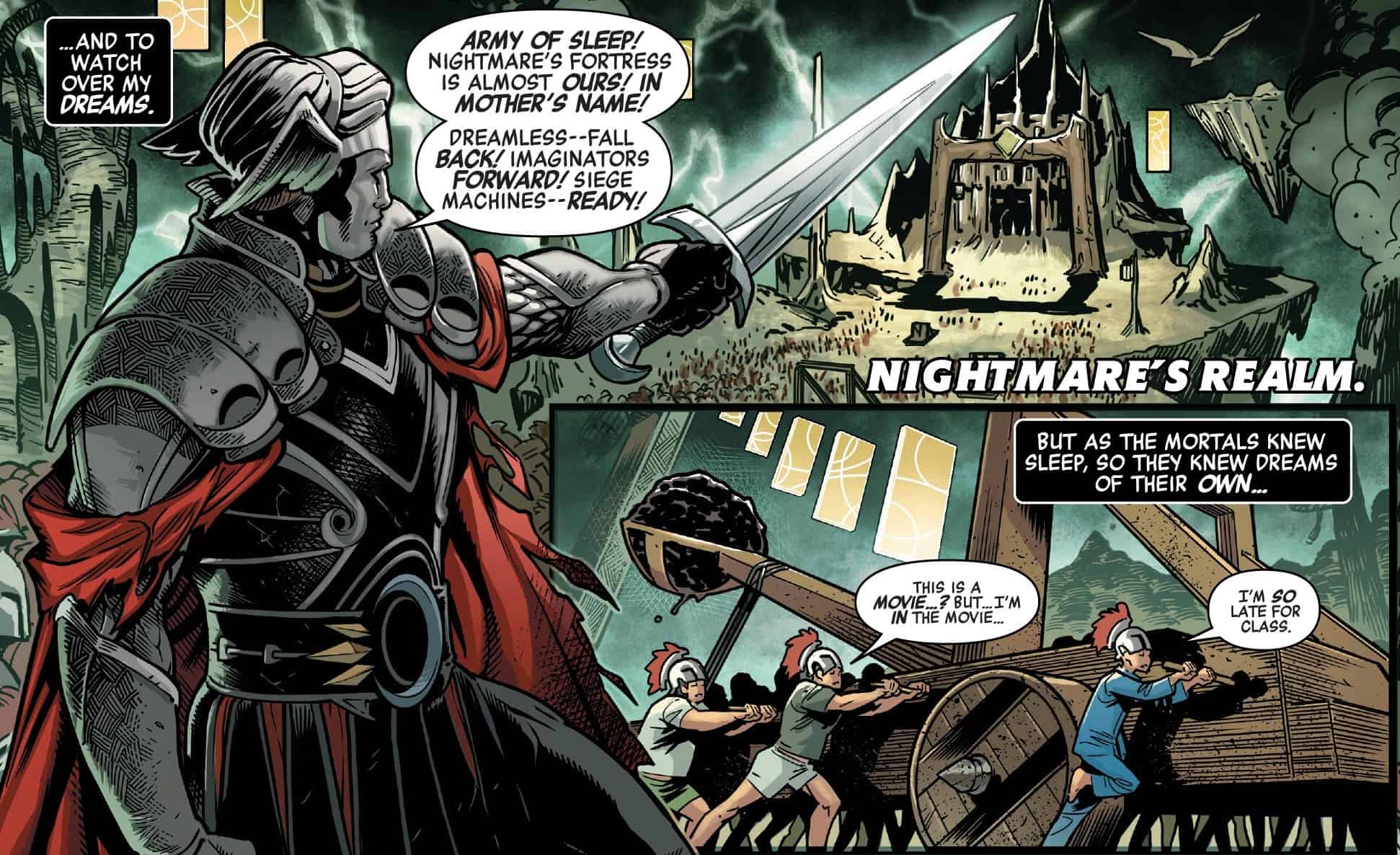 The art this issue is yet again stunning and worthy of the Gods. And as the history of Olympus is told through the eyes of Nyx, it is only fitting the artist is different here also. Sean Izaakse joins the ranks of Paco Medina and Juan Vlasco and is a worthy follow on, as the baton is passed to him in this Marathon telling. The battle is depicted beautifully, as Hypnos storms the gates of Nightmare while Vision and co struggle against one of their own in Omnipotence City. And as Spectrum shakes Herc out of his role as somnambulist puppet we are even treated to a mind bending touch of ‘Sterankoism’. 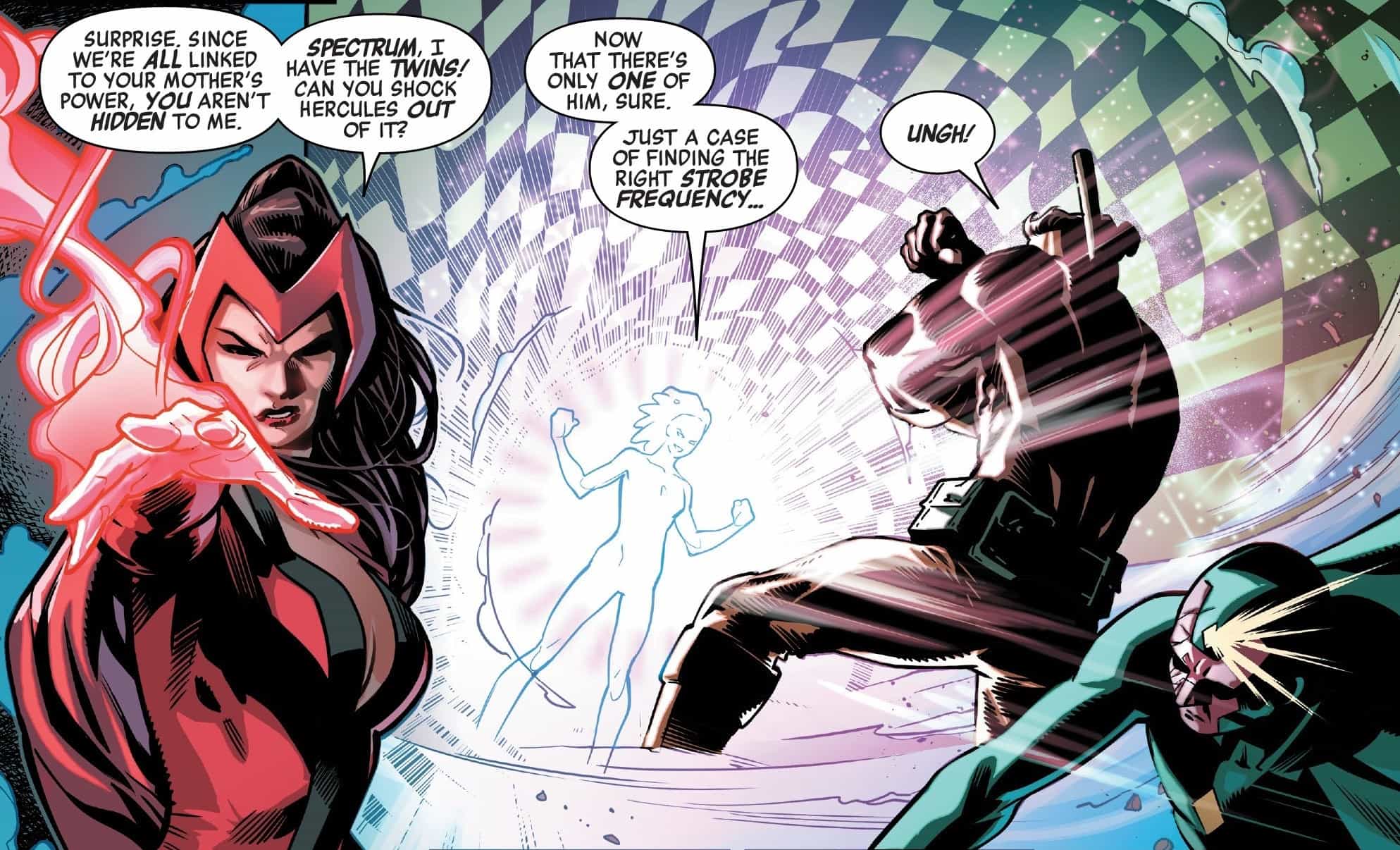 The Grecian beauty of Nyx herself could almost be lifted directly from an urn or vase and her beauty is only superseded by her savagery, as she holds Zeus aloft in complete disregard of his status. The imagery of her countenance could almost be that of one unearthed from the ruins of the Parthenon and seated behind protective glass in a museum. Marcio Menyz also is a suitable addition and matches the dynamic coloring of last issue, bleeding subtle color into the monochrome and making Olympus almost seem a go-to holiday destination. 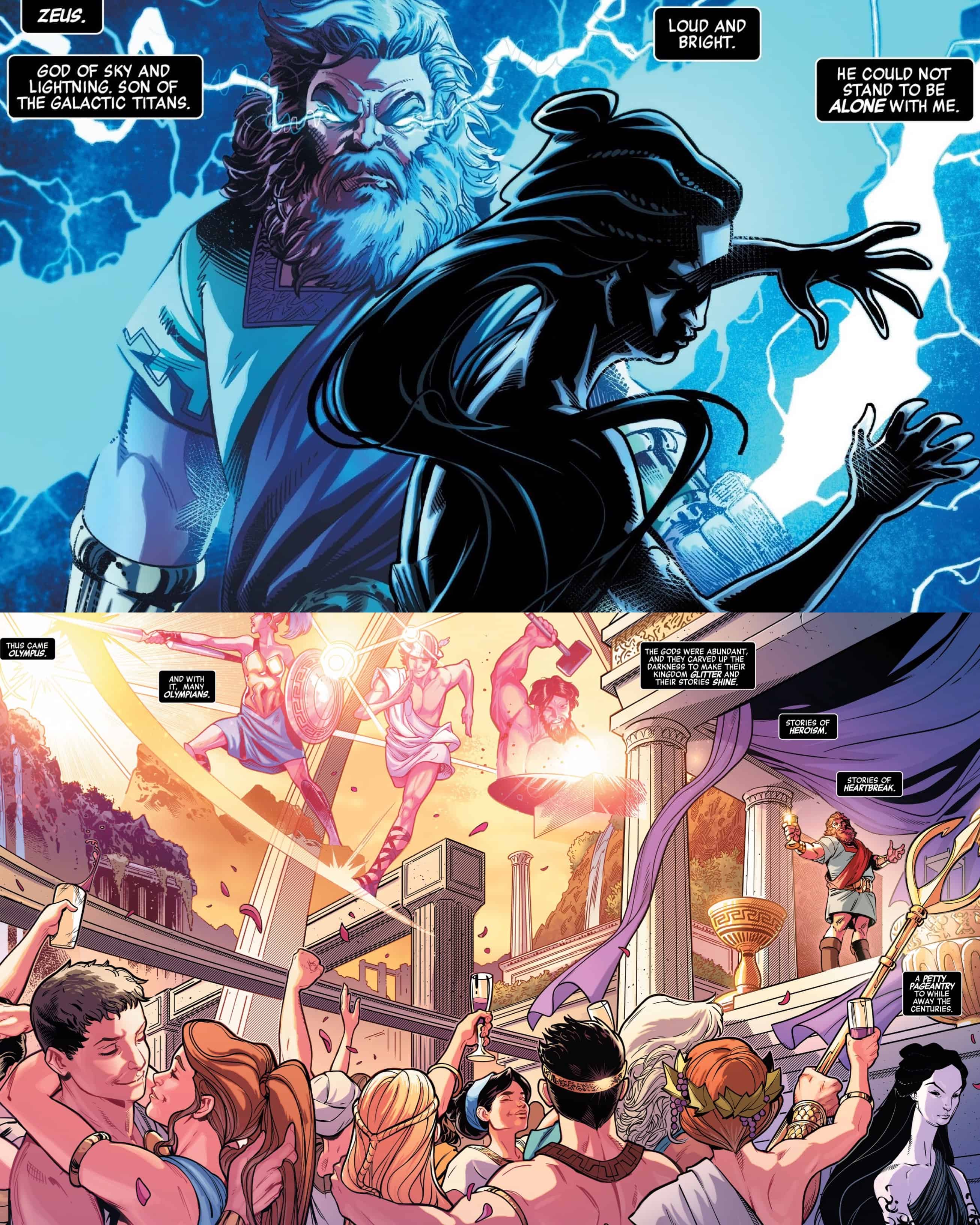 TEXTSPEAK….finally what better way to show Vision ‘glitch out’ than to have him using a little bit of diversity in lexicography. My all time favorite way for the letterer to get his message across 100%. And so far every issue has had a standout cliffhanger with this being no exception. It not only stands alongside the previous instalments as a memorable one, but vastly overtakes them and we are now dealing with a horse of a very different color indeed. Without revealing too much, it is safe to say the next issue will be one to remember. Yasmine Putri is killing me with these covers, this one being one of my favorites, depicting Avenger against Avenger and relating the dilemma of Hercules being set up as the unwilling weapon used against his allies. As well as a stunning variant cover by Phil Noto, one of three interconnecting covers depicting Hercules struggling against Apate and Dolos with Voyager porting in behind.

All in all my favorite issue so far. Cannot wait for the next instalment….what’s that you say? Next week? Dreams really DO come true.

Avengers: No Road Home #4: To The Victor Go the Spoils