Avengers: No Road Home #7: A Shell of Living Light 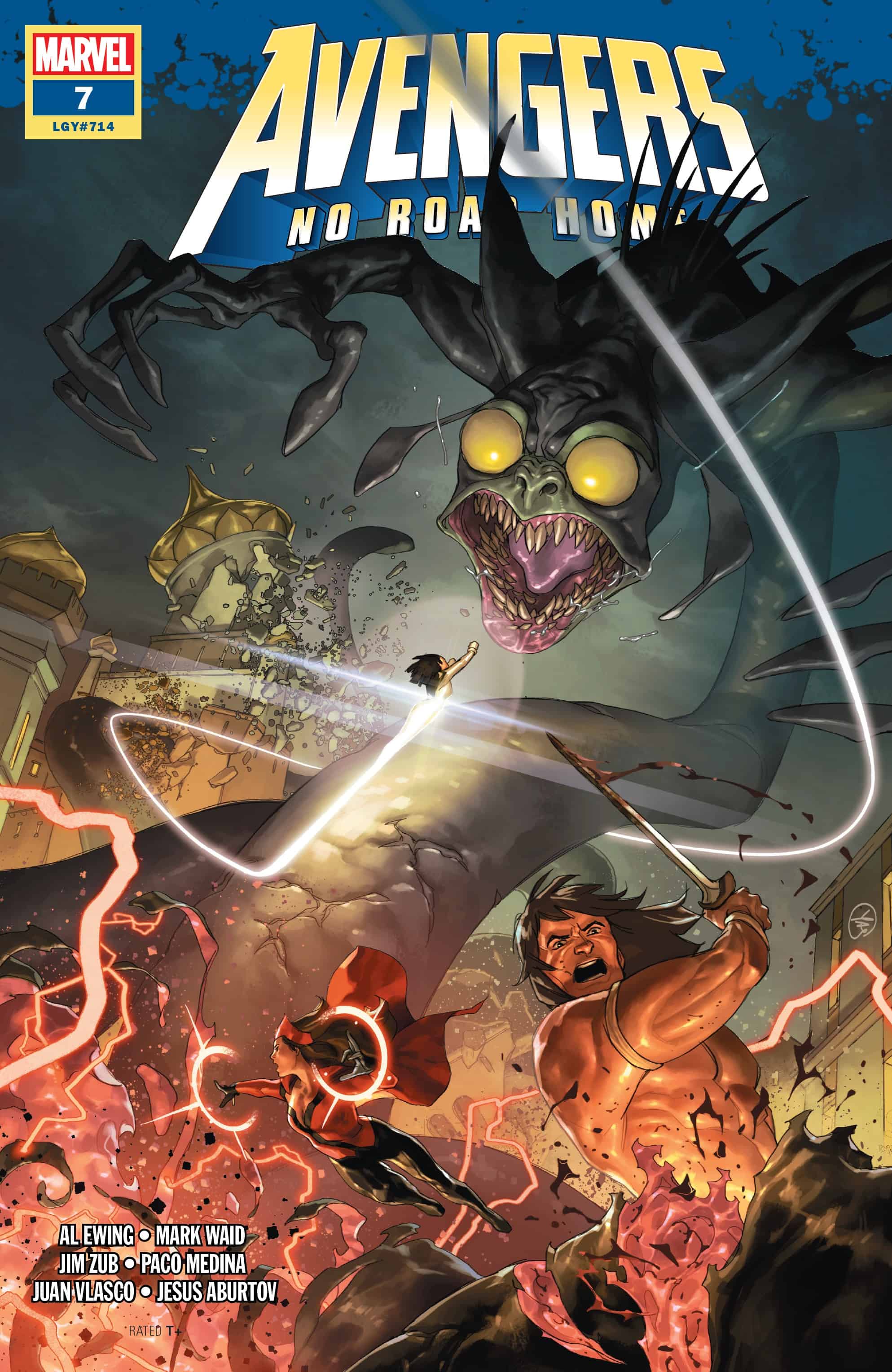 Avengers No Road Home is heating up with a lot going on. Scarlet Witch is blind and stuck in the Hyborian age with Conan. Hawkeye, Rocket Raccoon separated from the rest of the team Hercules, Spectrum, Vision and Voyager. In this issue, Conan meets the Avengers in another action-packed issue of this popular mini-series. 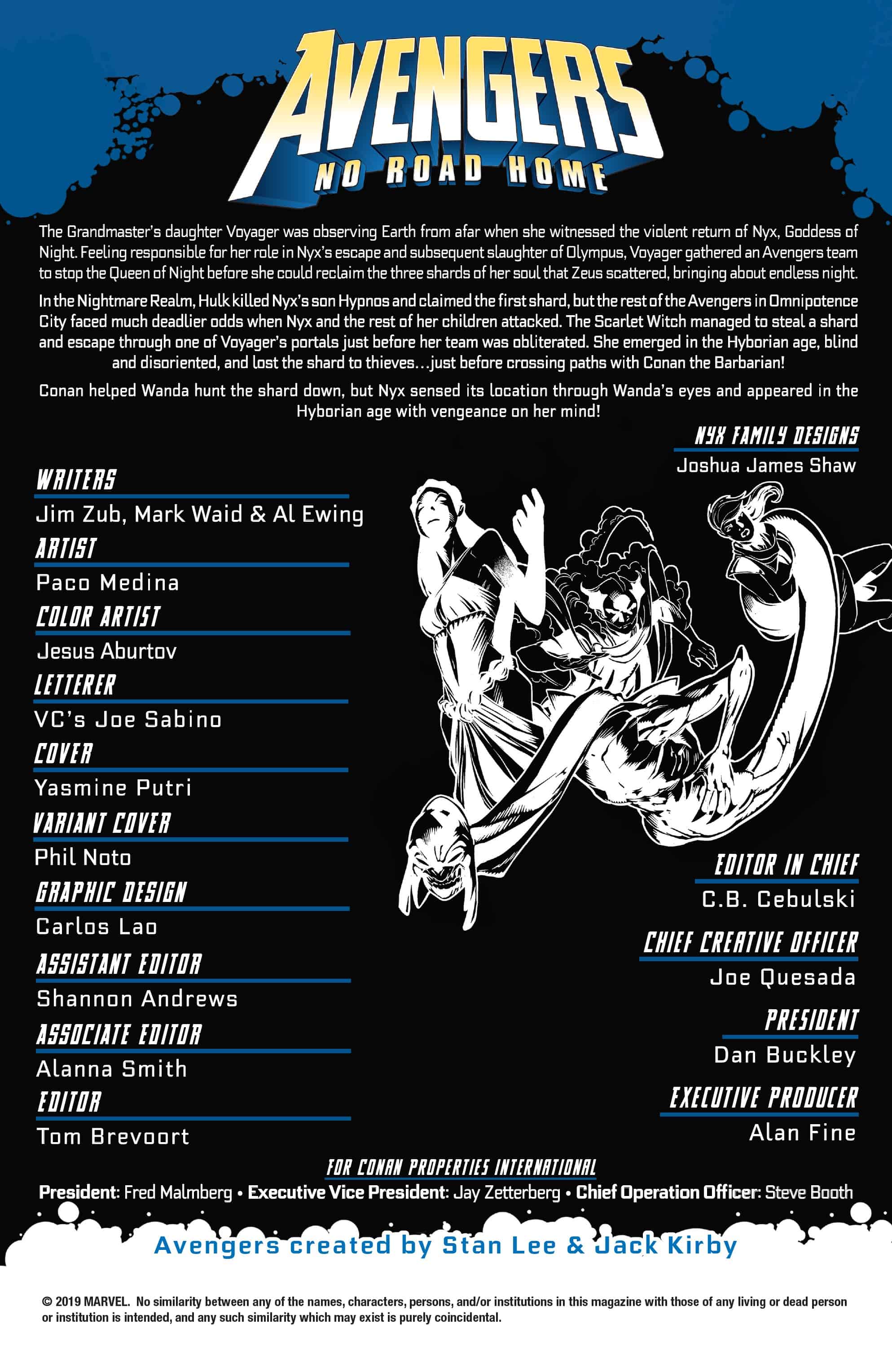 In each issue they have a narrative throughout the book, this time is was Monica/Spectrum who was taking the fight to Nyx this issue. Monica stated that she doesn’t sleep at night but still dreams. I enjoyed her monologue it was kind of out of this universe deep thought type of ordeal, which makes complete sense. 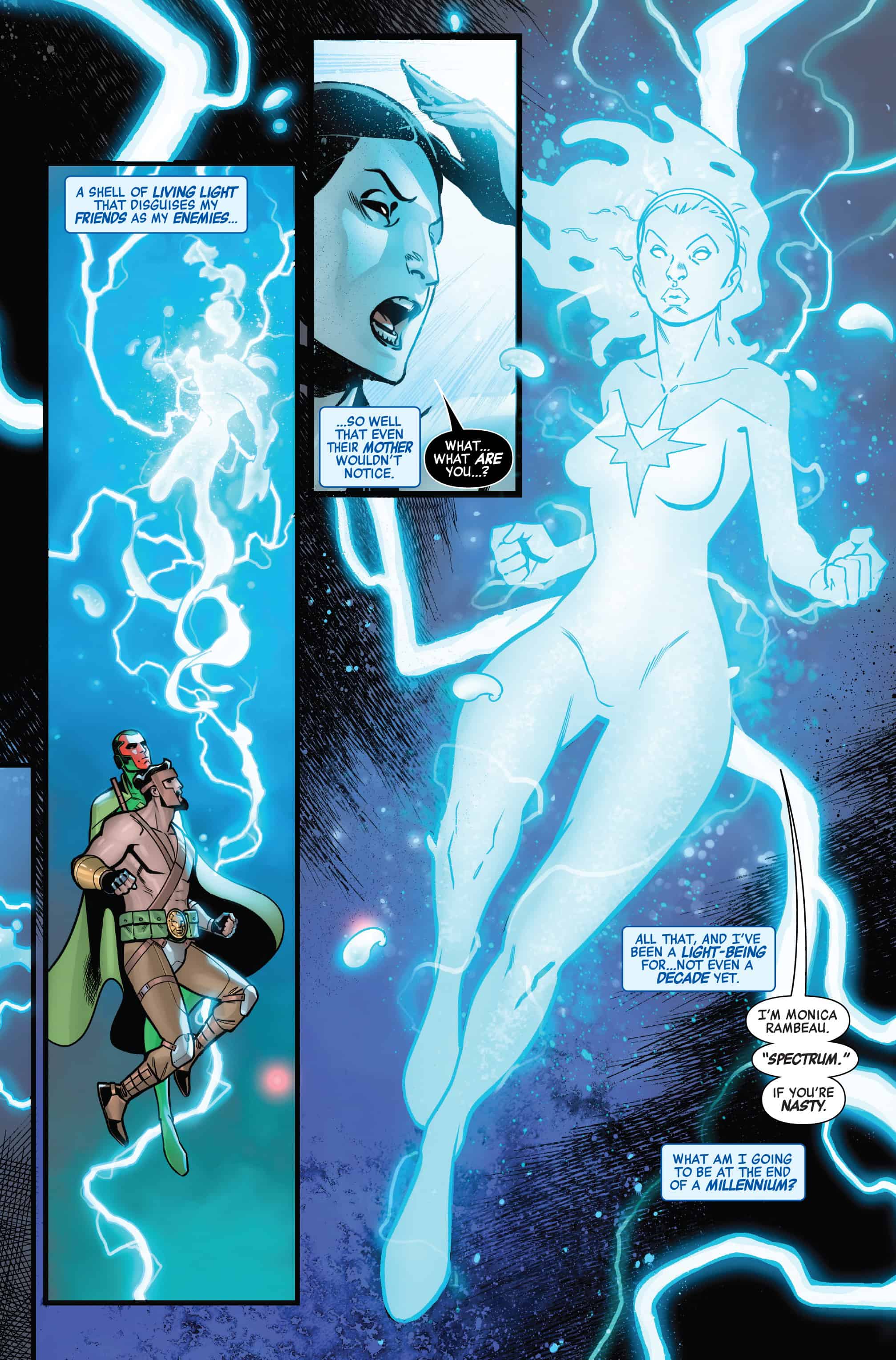 Conan meets the Avengers, what is the first thing he does, attempts to take out Vision who is already “dying.” I appreciated how they handle the introduction. He is from another time, he doesn’t know anything about the Avengers or technology. What would you do if something is near you appear to pose a threat, you attempt to take it out and pray that it works. Conan spends most of his time trying to figure out what is going. His brain tries to understand but in his world’s terms. Again I appreciate that the writers didn’t just magically make him know what is going on by “I have been told myths” or something easy along those lines.

Hawkeye, Raccoon, and Hulk are stuck in the Nightmare realm. They are able to go wherever they want. Hulk wants to go to Euphoria. I am a little bit confused about that part. I am sure it’s part of the story. Especially since Hulk is still a little hard up about Hawkeye trying to Kill Banner. I do enjoy the art, but not always consistent. Sometimes the ways faces are drawn seem a little off. However, it’s still good. The color is outstanding in each panel. The Paneling is really neat as well. 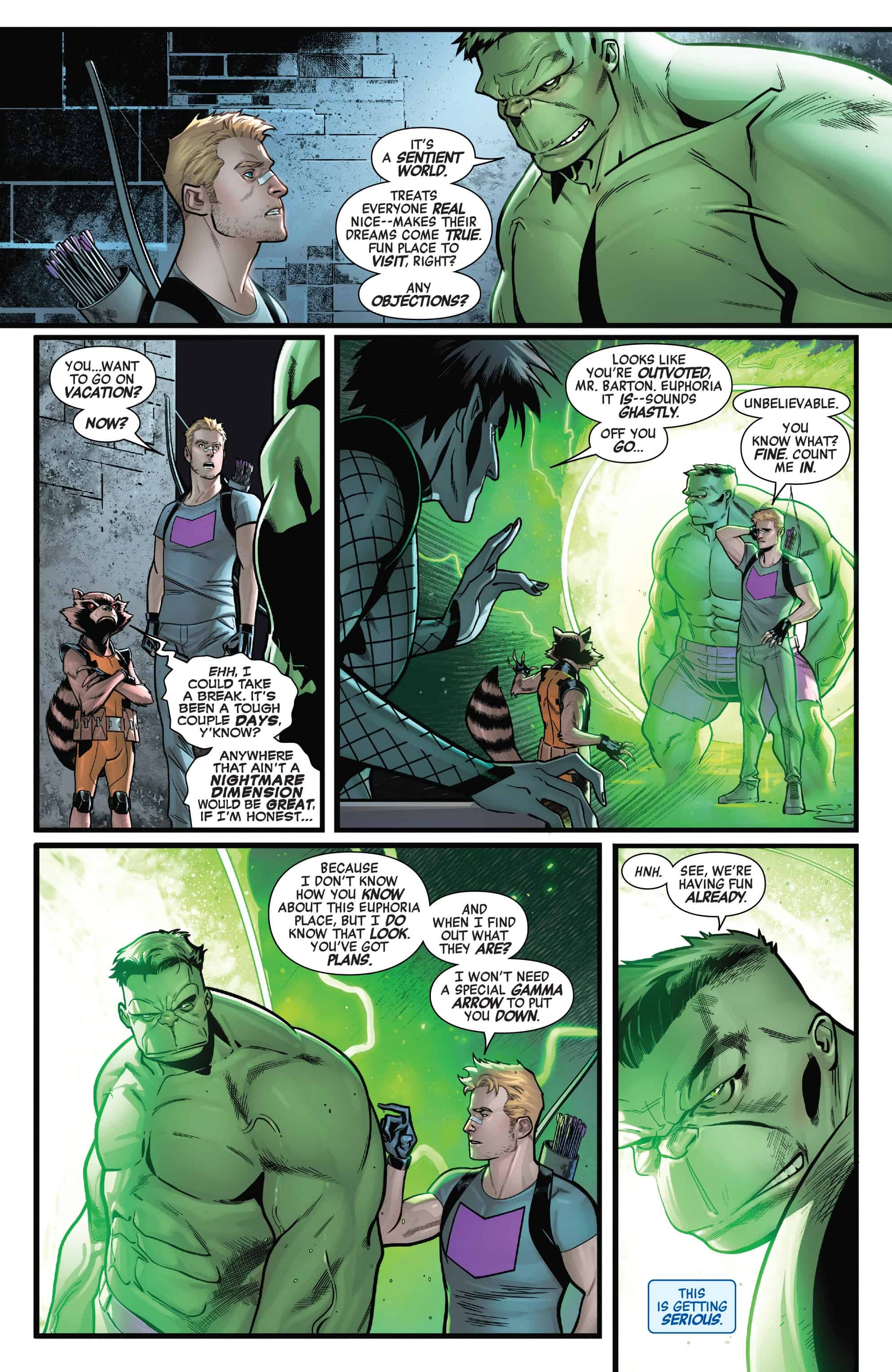 The overall story is coming along nicely. I believe some elements to the story I am lost at because I don’t have previous knowledge of. However I think it’s real fun, action-packed, can’t wait for the next issue series. It’s a hot series. 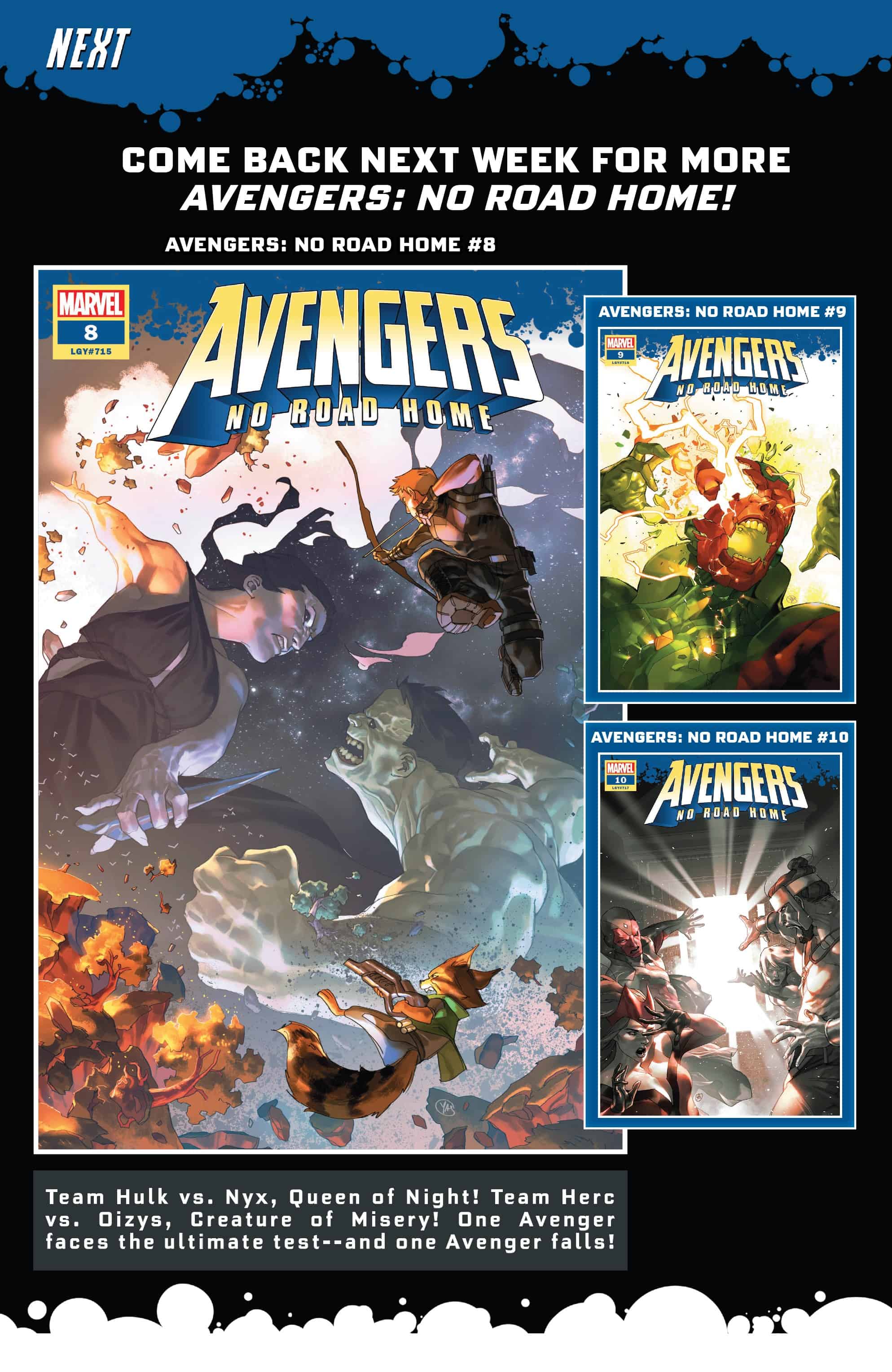 The AVENGERS series every Avenger fan should be reading.

Avengers: No Road Home #7: A Shell of Living Light