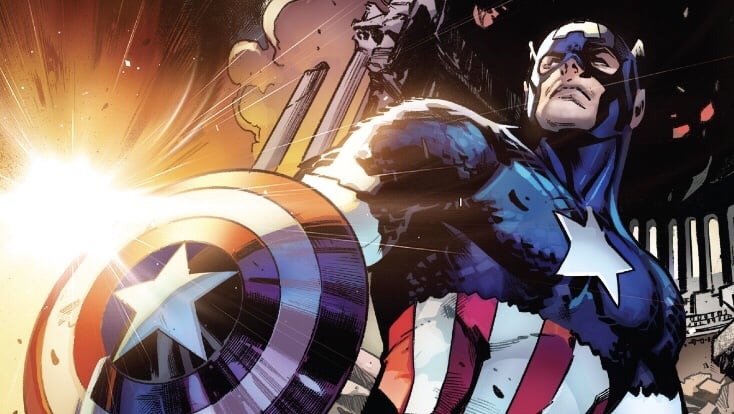 The world is in terrible danger and no one knows what’s going on. Avengers, it’s time to assemble! 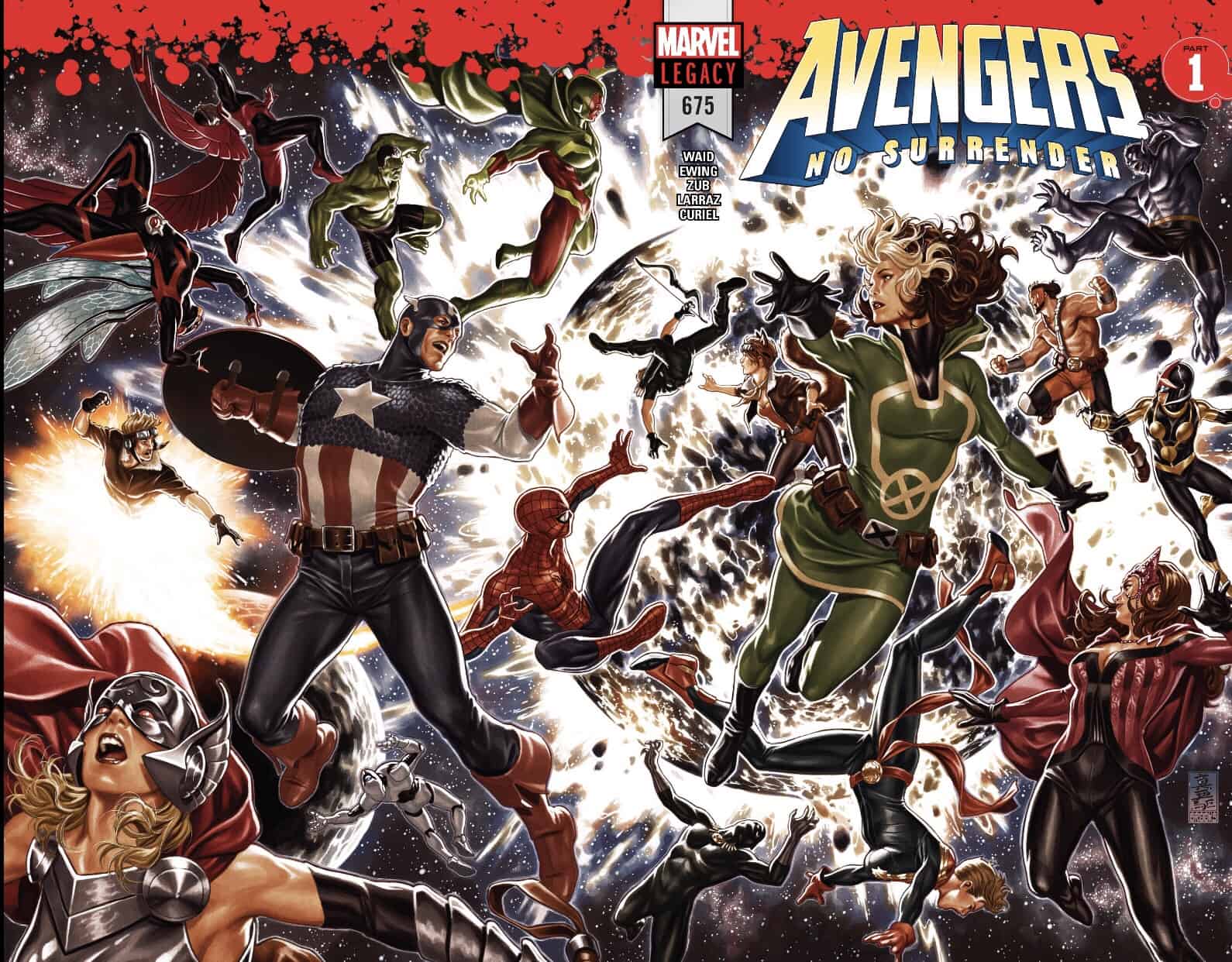 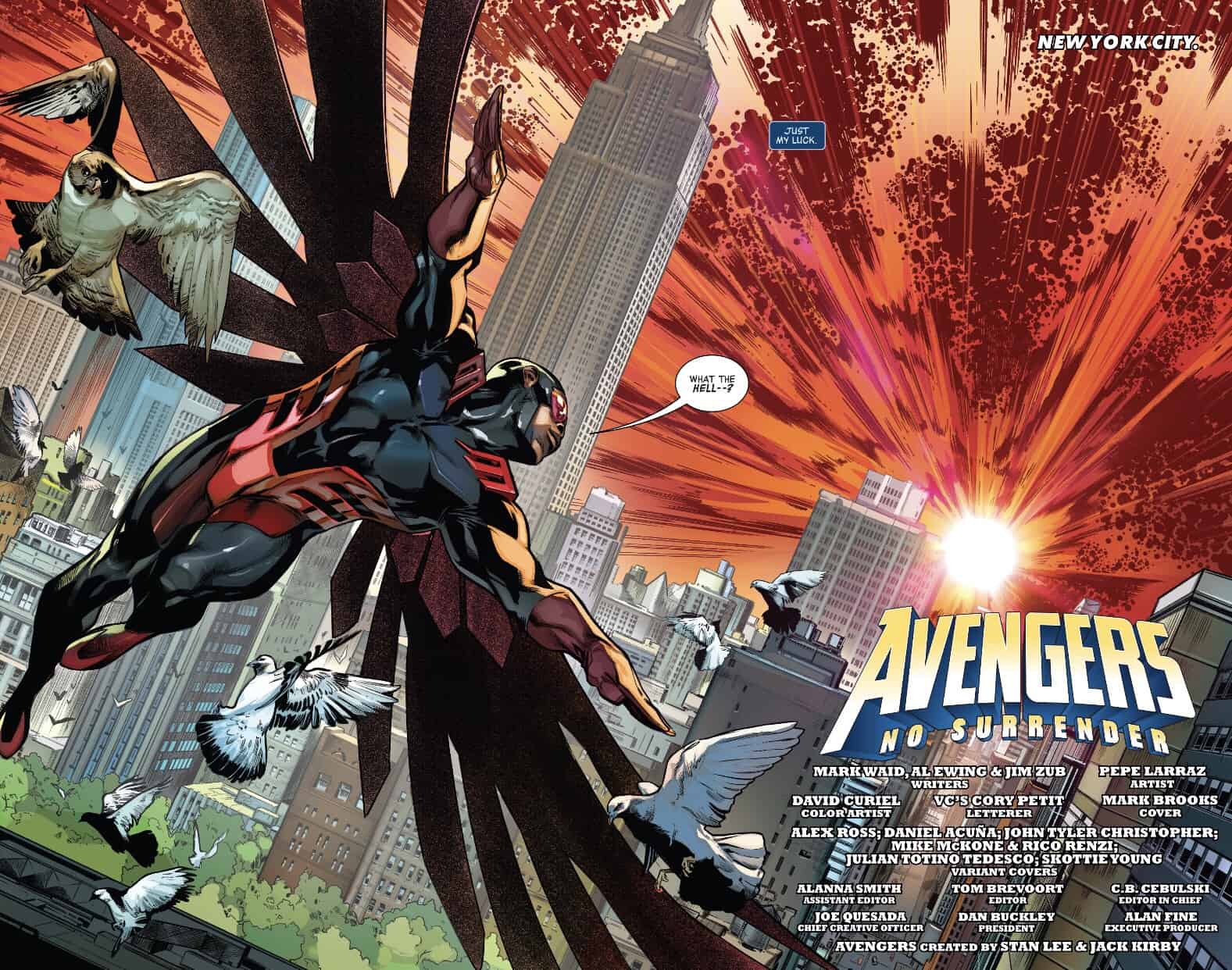 What You’ll Find Out: The Living Lightning, a one-time Avenger is working a case, busting a group of thieves. He begins to question his role in life as he feels he should be doing more as a former Avenger. Before he has time to contemplate further, the world goes into chaos with natural disasters of every kind happening around the globe. Every Avenger responds the danger in each area they are in, rescuing people as they can. Communication between the Avengers begins as they assess the situation. Beast, determines that the Earth is no longer in its orbit. In fact, Earth is possibly no longer in its galaxy. As they attempt to reach Captain Marvel and Alpha Flight unsuccessfully. At that same moment, Captain Marvel and her team are baffled as Earth has disappeared from sight.

Various heroes around the globe, including Hercules, Captain America, and Falcon are still rescuing civilians. As Wasp does the same, Jarvis who is with her is hurt saving a young boy himself. Then with no warning, many of Earth’s heroes are suddenly frozen in place. As if they were put on pause. The Champions, X-Men, and most of the Avengers are affected. Those who are unaffected are called to assemble at Avengers Mansion. 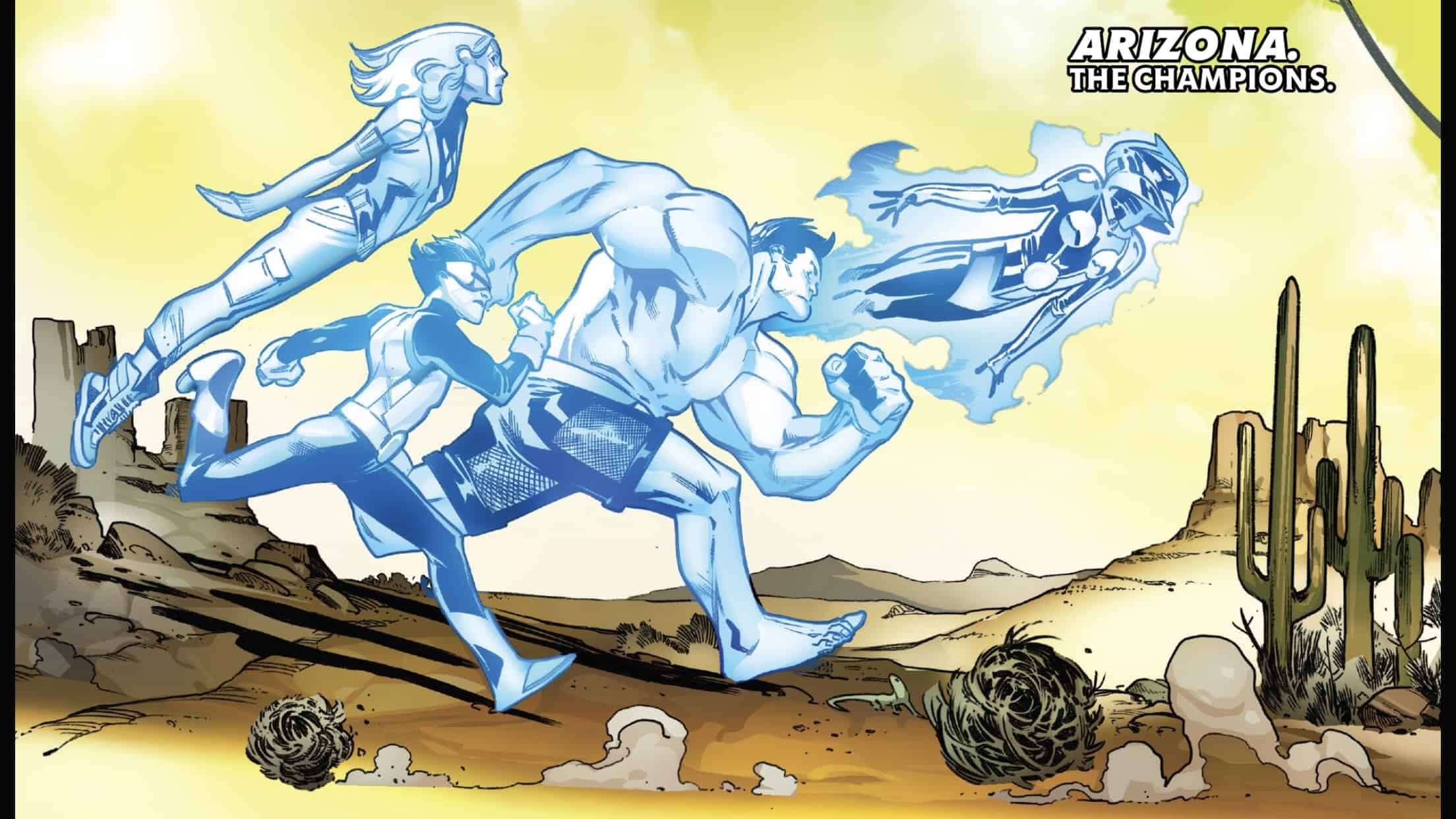 Among those left, Rogue, Quicksilver, Beast, Falcon, Thor, Hercules, and even the Living Lightning among others. Are baffled by the events that are taking place and it’s already taking its toll. The new Wasp informs the remaining Avengers that Jarvis is hurt and at a hospital. His condition is critical and it is uncertain if he’ll live. Rogue, unintentionally, offends the Wasp, saying Jarvis isn’t a priority and he’ll understand that the Avengers can’t be there for him at the moment. The Wasp runs off with Beast hoping to aid her with Jarvis. The question remains though…who assembled the Avengers. That is when a woman appears and everyone seems to know her. The very same woman you can see in the Avengers statue behind her. “Once an Avenger”… 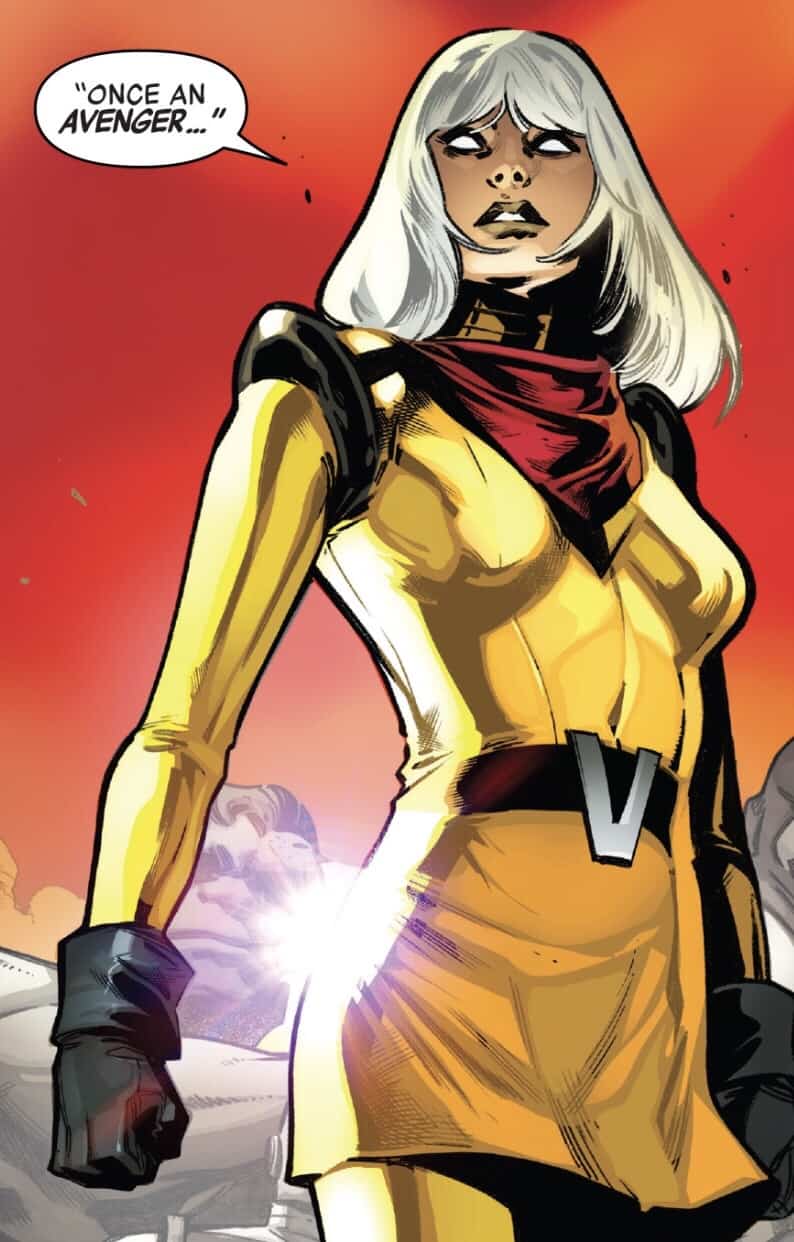 What Just Happened? This mystery has been a question ever since Marvel Legacy began. In every Avengers comic, you can see the statue with an unknown female hero among the original Avengers. Mark Waid, Al Ewing, and Jim Zub set up this first issue nicely to Avengers No Surrender. The set up is simple but effective. Put the world in danger that would need a combined effort among many heroes. Take out the heroes you don’t need by unknown circumstances. And introduce your mystery character without dragging it on. This is pure superhero storytelling at its most simplistic, but its best. There are questions and intrigue that haven’t been felt since the Sentry debuted. And what’s most exciting is, we’re getting a break from the obvious heroes you’re used to saving the day. As Captain America, the most prominent among those who were frozen, won’t be around to lean on.

Pepe Larraz has a good eye and is a solid artist for this story. Larraz can give you a lot with great detail without overdoing it. I love David Curiel’s colors as he seems to brighten every page and make them feel big in scope. The world is in trouble and you feel it come off the pages. I’m looking forward to what they have coming. Even the emotional moments just resonate when you see the new Wasp angry and upset over what happened to Jarvis. 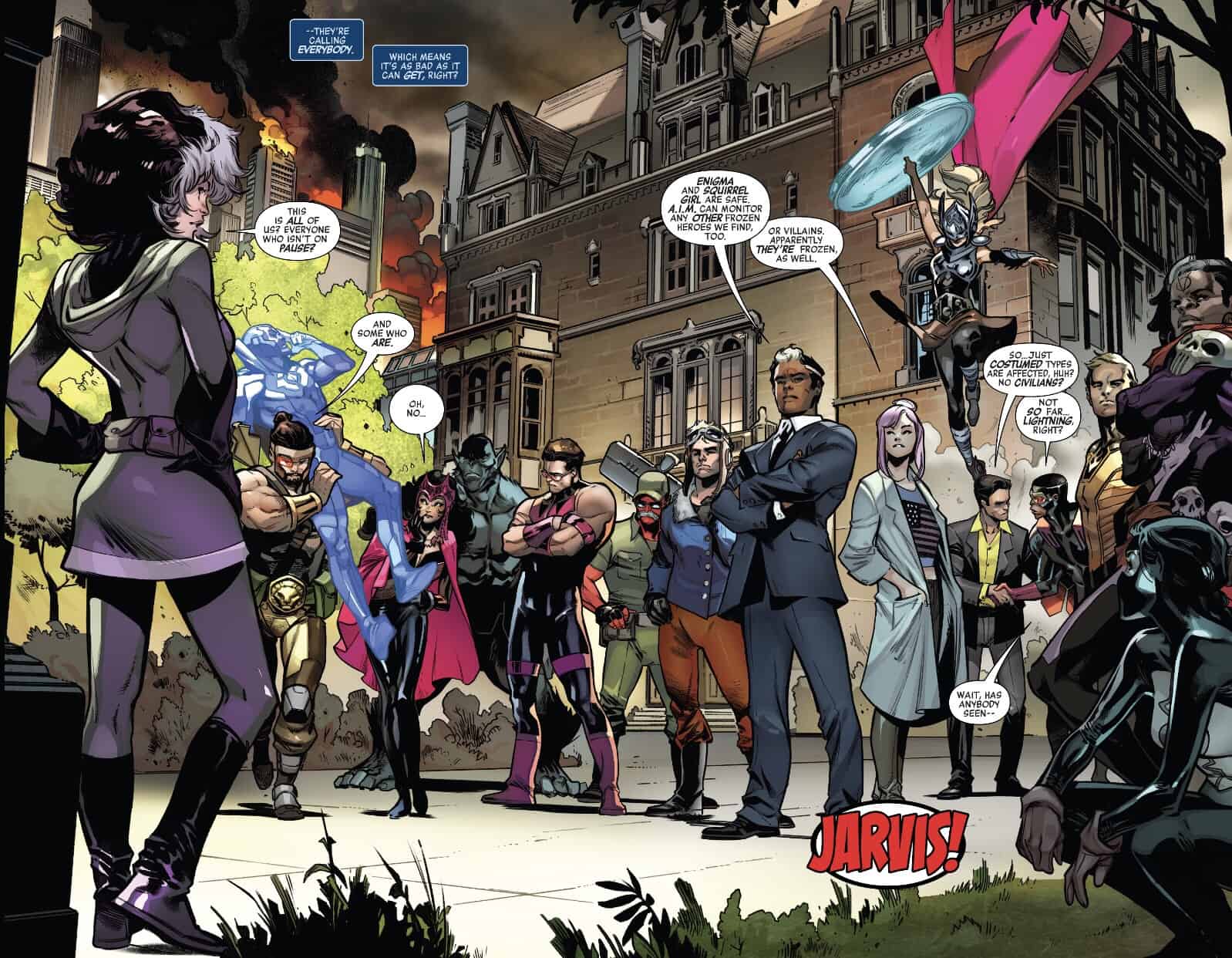 Rating: 9/10. Final Thoughts: This is exactly what you want from a superhero story. The world is in danger and the heroes have to come together to save it. For the Avengers, it almost seems like it’s been too long since we got this kind of story on such a grand scale. After Civil War 2 and Secret Empire, it’s nice to have that feeling again that the heroes are on the same page. Add to that some mystery character that’s been teased for months now. And we have us a genuine superhero story. Hopefully, it stays that way and the mystery behind this new hero doesn’t turn into a situation like the one we had with the Sentry. And this new hero doesn’t actually turn out to be the threat.