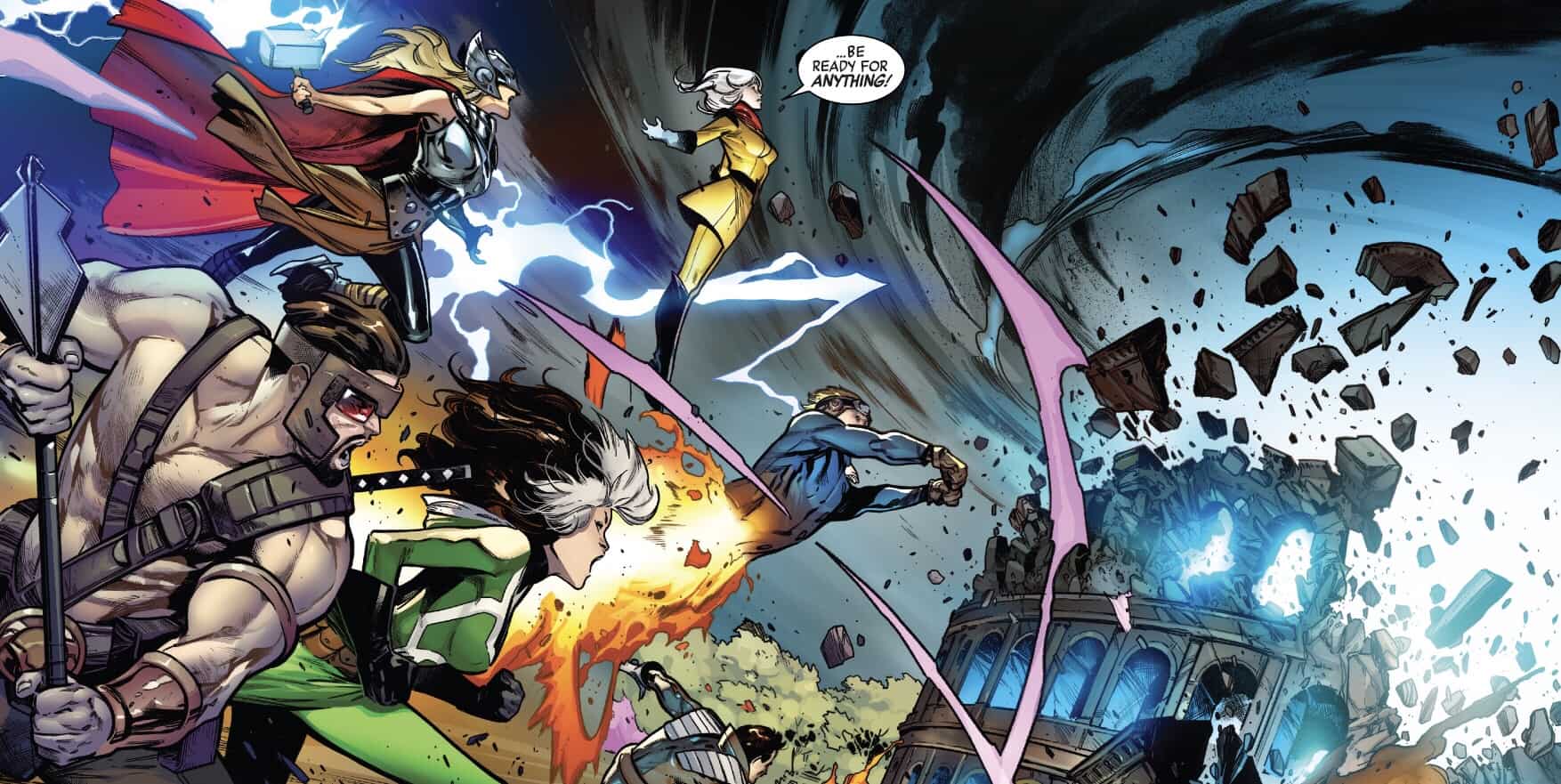 The world has been hijacked and used as the staging ground for some twisted contest. It’s time for the Avengers to prove they’re still “Earth’s Mightiest Heroes.” 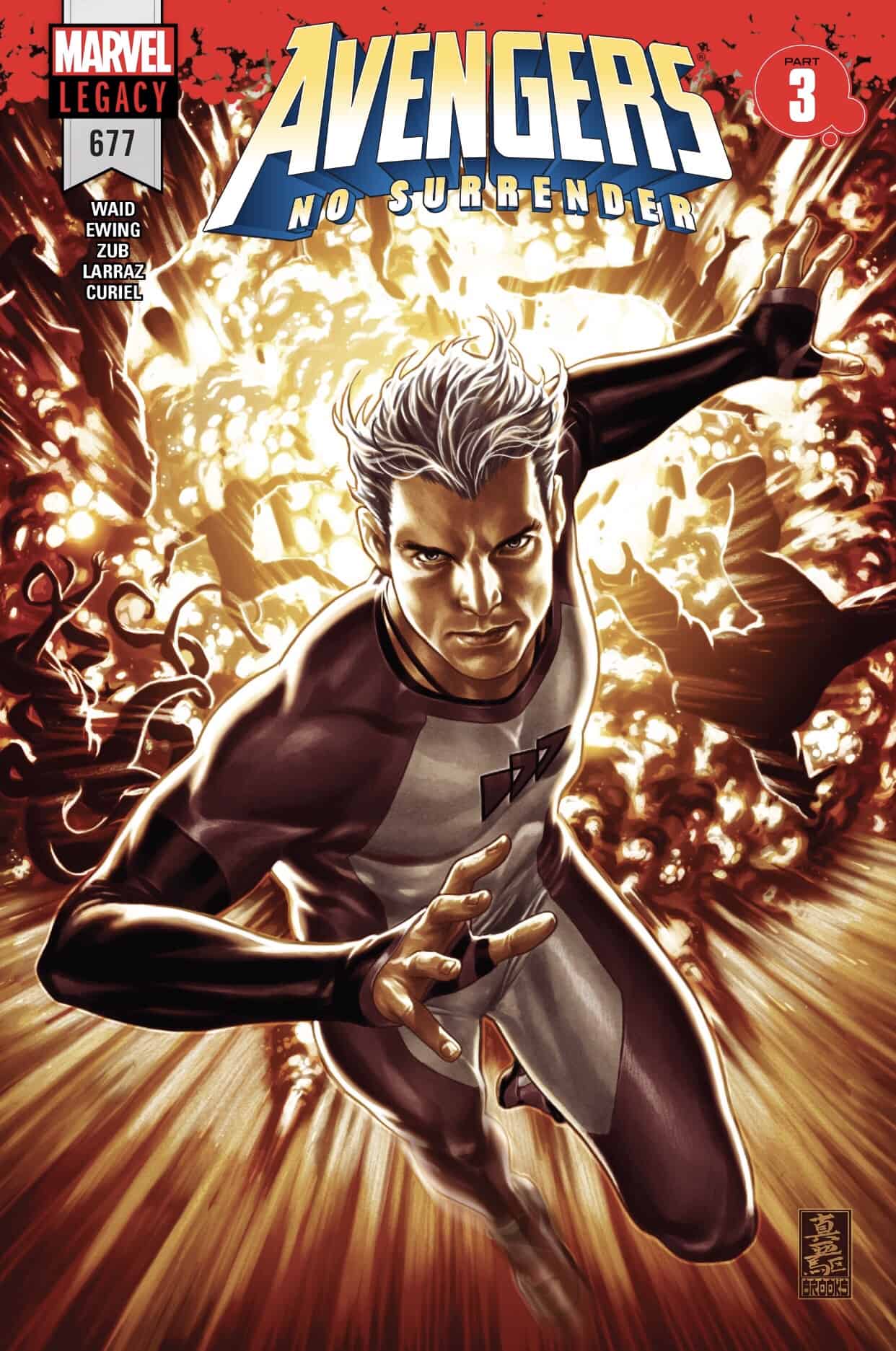 What You Need to Know: The Earth has been stolen and natural disasters rampage throughout the globe. To make matters worse, most of Earth’s heroes and villains are locked in some sort of stasis. With the Black Order and Lethal Legion appearing out of nowhere. The remaining Avengers must now face off with these two deadly teams. Restore surveillance and communications around the world. And find out who exactly is behind all of it. Meanwhile, Jarvis, the longstanding and loyal butler to the Avengers is fighting for his life after getting severely injured rescuing a small boy. Fortunately the return of Voyager, a lost founding Avenger has come to help. It may be too little, too late as the Black Order has appeared above Avengers Mansion and destroyed it. Along with every remaining Avenger inside. 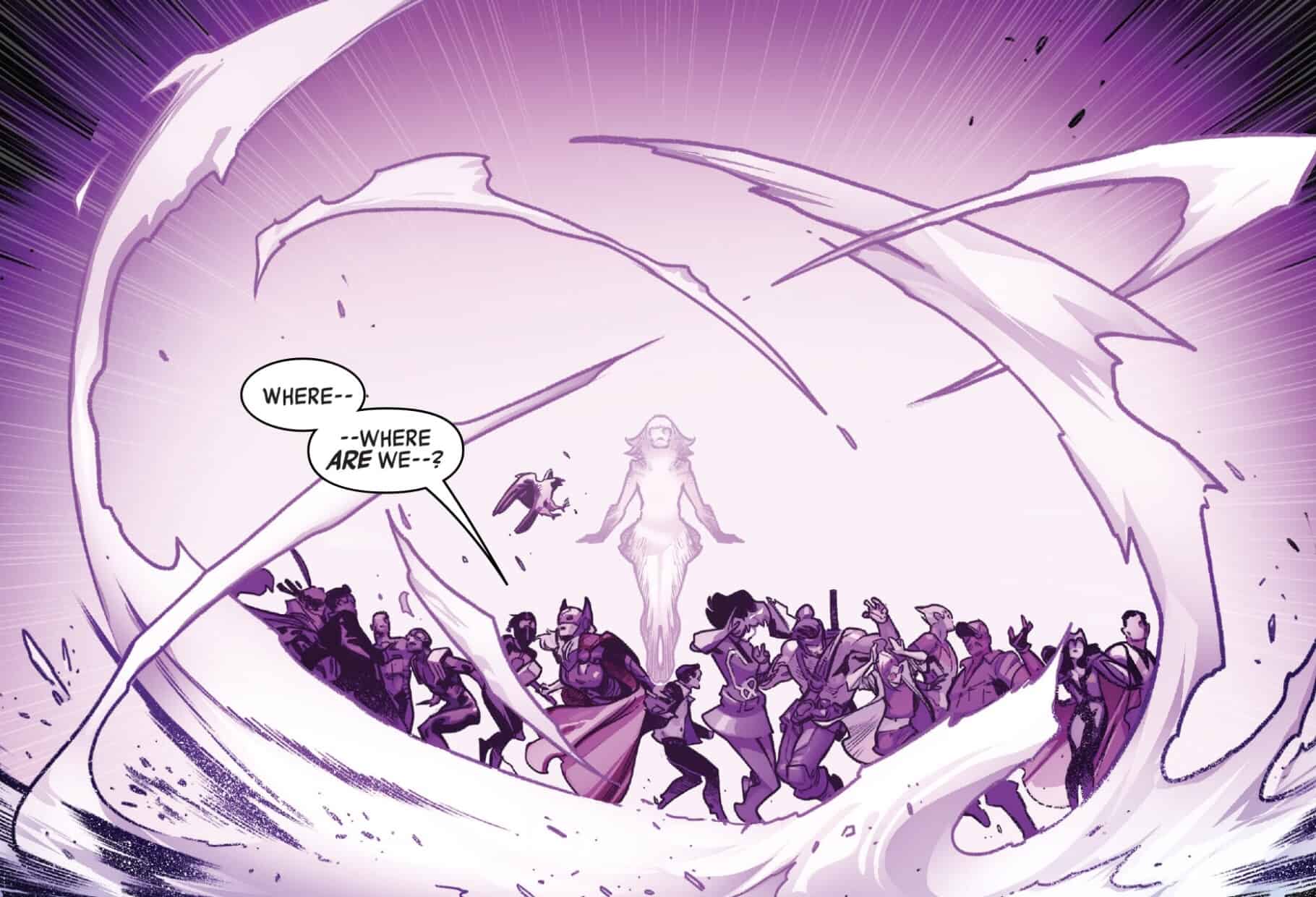 What You’ll Find Out: As the Avenger’s mansion begins to explode, Quicksilver is the first to react and understand what’s going on. He knows, even he’s not fast enough to save the Avengers…but Voyager is as she teleports everyone to safety. Voyager brings the team to an underground facility built by Tony Stark many years ago when the team first started out. Quicksilver is adamant that the Avengers must strike back now at the Black Order. He’s quickly overruled by Rogue and Falcon who believe they still need more information before they move on anything. They don’t really get the chance to gather intel as the Grandmaster and his mysterious opponent start their game.

While Beast and the young Wasp try to save Jarvis’ life and figure out the mystery behind his abnormal brain patterns. Toni and Roberto at AIM, have established limited coms and surveillance. Just in time to warn the Avengers of the Black Order and the Lethal Legion attacking in two separate locations. Rogue and Falcon pick their teams to deal with situations. Quicksilver is left off both teams due to the lack of trust they have for him. Voyager teleports Rogue’s team to Rome and Falcon’s team to Peru. Leaving Quicksilver behind and the Scarlet Witch and Jericho to figure out how to release the other heroes from stasis. 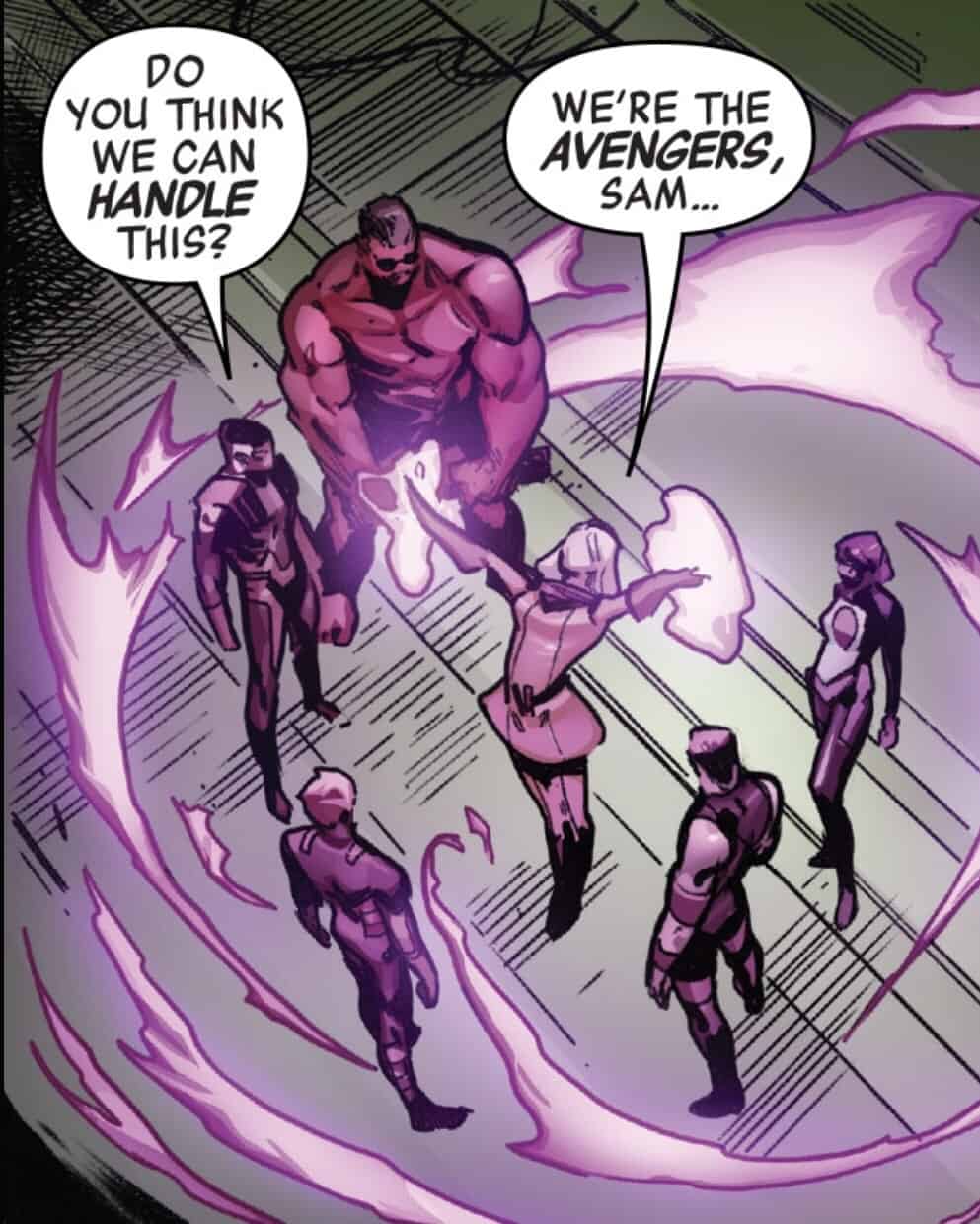 Rogue’s squad is overmatched by the Lethal Legion. As one by one the Avengers fall to their superior powers. Quicksilver won’t sit out the fight and is eager to make up for his past mistake of almost getting Synapse killed. Pietro arrives just as Cannonball is the last to fall and is handling the Legion on his own. At that moment, Wanda and Jericho make their first attempt to release the Vision from his stasis. Remarkably, Quicksilver is beating back the Legion. But at the moment the Vision is freed, Quicksilver is locked in stasis himself. At the mercy of the Lethal Legion, Quicksilver is unable to stop them from “taking him out of play.” 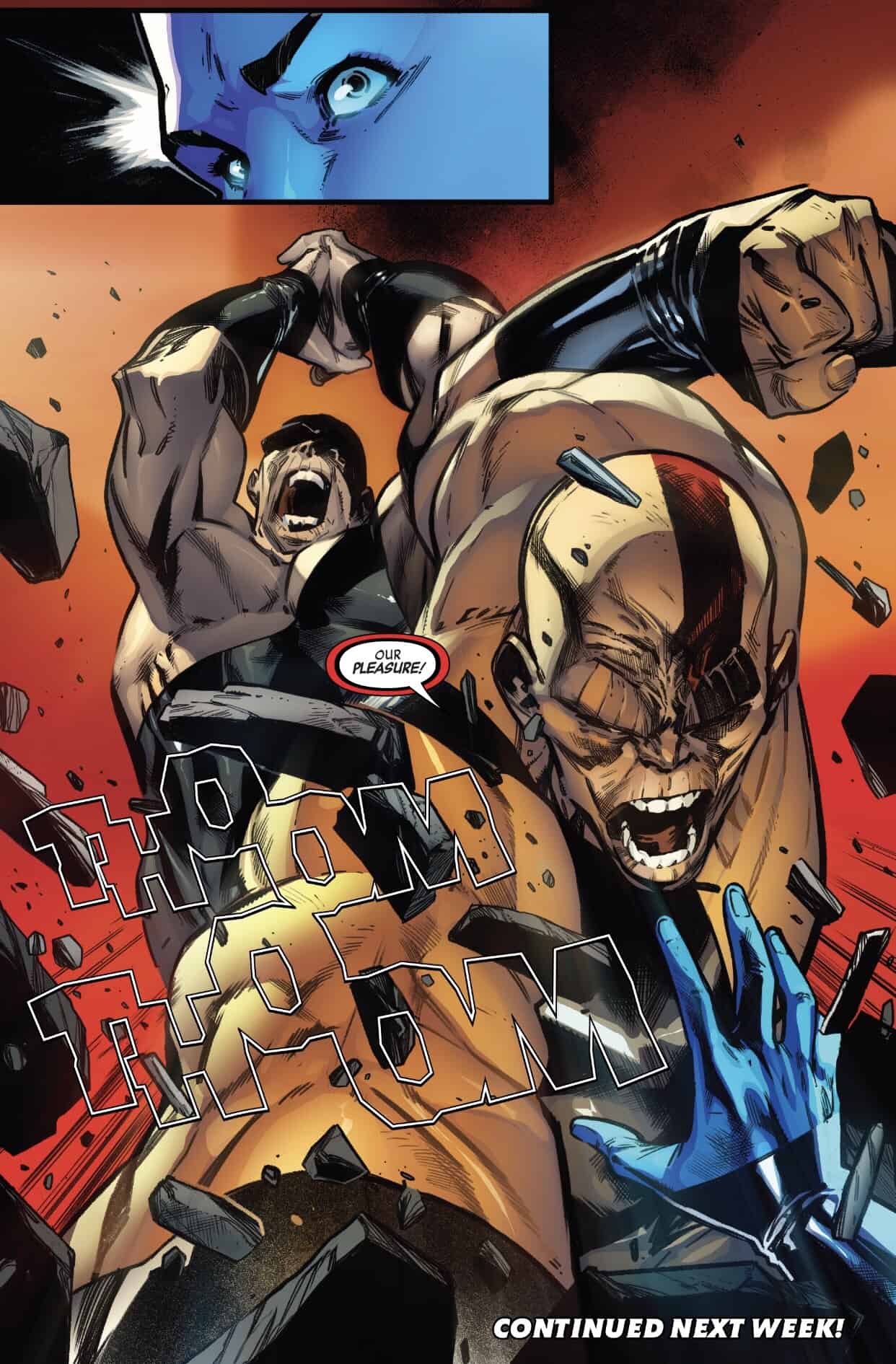 What Just Happened?
Things speed up with Quicksilver at the forefront this issue (no pun intended). Waid, Zub, and Ewing bring the action in part 3 as things get from bad to worse. And this is exactly what was needed to not only get the story moving along. But there is brilliant writing done that just seamlessly adds Voyager to the mix. We got her backstory last issue and without missing a step, Voyager takes her place among the Avengers as if she’s been there all along. From saving the team and teleporting them to safety. To being their transportation when the team needs to split up and take on multiple threats at once. With Quicksilver as the main focus, for the most part. We get an issue of more than just action. The tension between Pietro and Rogue. The mystery opponent of the Grandmaster. And of course, the suspense of what will happen or is happening to Jarvis. Plus, the apparent death of long-time Avenger, Quicksilver.

Larraz and Curiel are obviously having fun this issue with all the action and explosions they can pack into each panel. There is so much going on but each page is clear and beautifully done to give you a proper visual story. Especially the mannerisms and expressions from Quicksilver. This is his part of the story and the art never takes away from that. In fact, it enhances it. The way they both bring out a grander look to the Grandmaster even hypes the importance of who the character is. 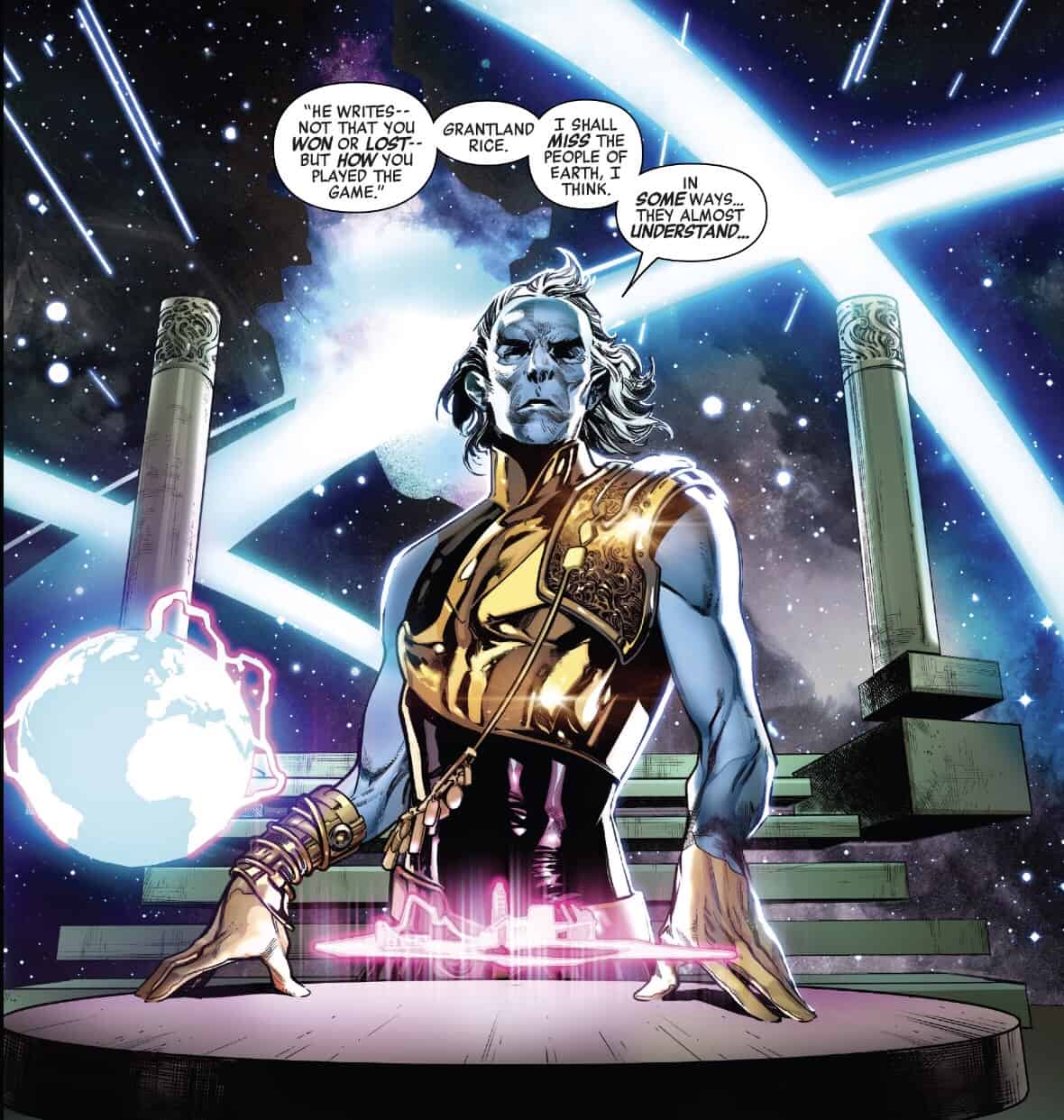 Rating: 10/10. Final Thoughts: This is writing at its best, period! Waid, Zub, and Ewing managed to pull off what is so difficult. Introduce a new character, flawlessly integrate them into the story without taking anything away from the other Avengers. And give you a great story all the way around. I can’t wait to find out what comes next! I’m all in! Any Avengers fan should be all in too!