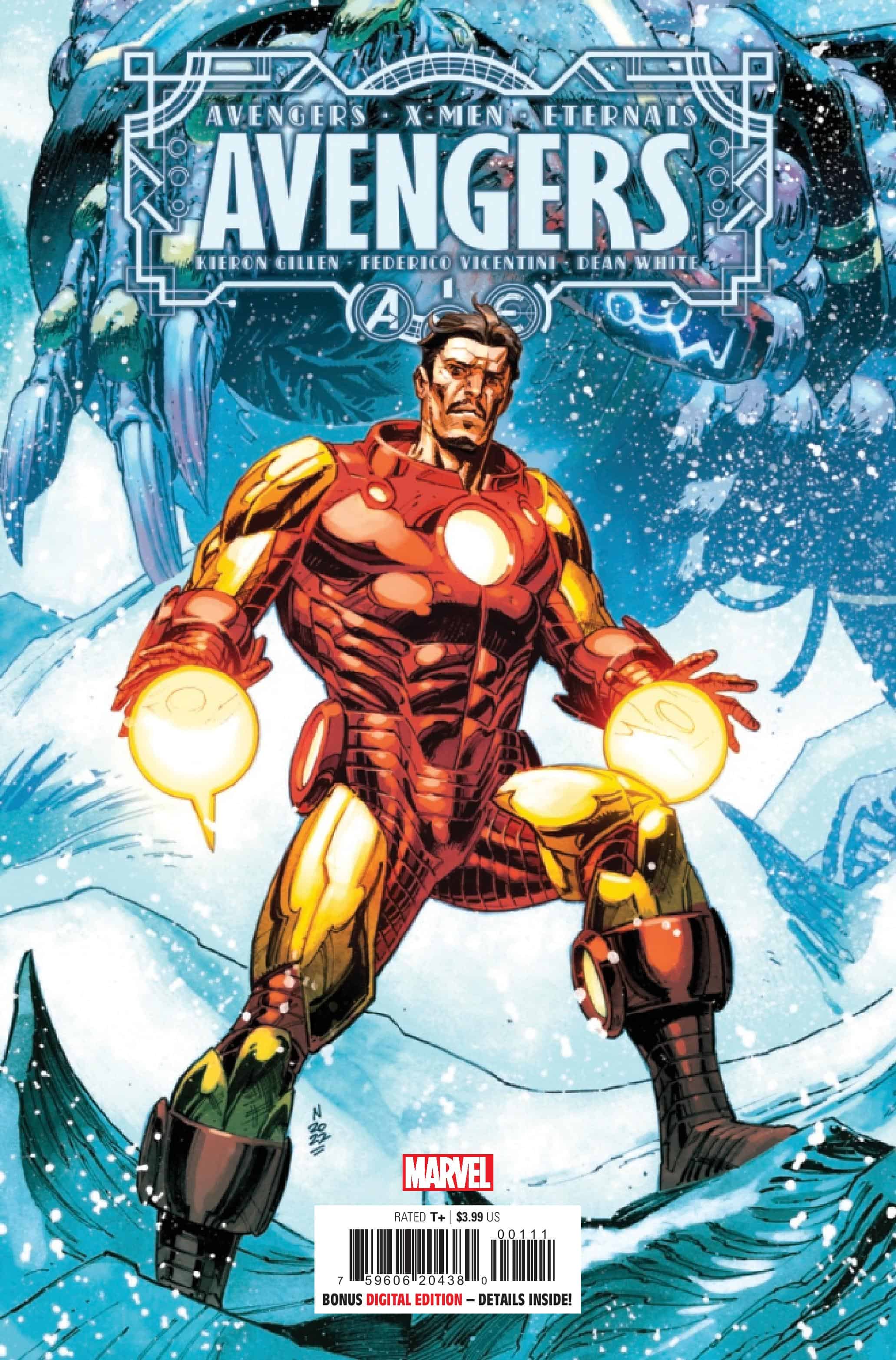 He’s spent his life building suits to protect himself, but now, Tony Stark has to enter a suit of armor that could kill us all. Can he survive? Can anyone?

It’s the first of three one-shots focusing on a singular character, and we get to see an in depth focus on Iron Man, as he’s judged by the newly awakened Celestial, and we’re treated to some art by Frederico Vicentini (X Deaths of Wolverine), written by Kieron Gillen. Thor and Capt. Marvel are both dead, along with so many others, can our heroes save the day? We’ve already seen Cap was rejected, will the same hold true for Toby?

So it’s a hearty welcome home for Gillen, as he returns to the character he shepherded after the big AvX storyline, where we had a line wide reshuffling of creators, and like with Thor and the Uncanny X-Men, Gillen followed Matt Fraction’s footsteps and jumped on Iron Man, with X-Men alum, Greg Land. Gillen’s Iron Man was…middling, at best. It wasn’t bad, but it really leaned heavily into the Downey Jr. Tony, than comic Tony, which is okay, it just wasn’t Tony. Flash forward to now, and comic Tony is heavily influenced by the films, so Gillen’s voice here seems to line up with what we currently have.

Gillen also brings along Sersi from his Eternals run, along with Sinister from his Immortal X-Men, and they continue to add levity to the situation, but the stakes just don’t feel…like they’re real. Everyone who’s died will more than likely come back at the end of this, so what’s the point of this issue? Sure, we get a couple panels where we see some of Tony’s darker moments, but by the end of the issue, it just seems like yeah, so what? That’s the creeping, nagging complaint that I’ve been pushing down with every side issue that isn’t the main mini. At least with the main mini, we at least get Valerio Schiti on art. With that note, let’s talk about Federico Vicentini on art chores. I’m just gonna be blunt. I’m not a fan. Vicentini is a great artist, but it’s just not working for me here. I wouldn’t mind seeing him on something else, but his style just didn’t pull me in the direction that the story was meant to. While this issue didn’t really do it for me, I’m still interested in seeing what Gillen will give us with the Jean Grey installment.

It’s the first story in a series of one shots where we get an in-depth look at the Tony Stark, and his judgment at the hands of the new-born Celestial. We get to see some of the most formative decisions and mistakes Tony’s had through the last 60 plus years, does he make the cut? Honestly, it’s something that we’ve seen Tony face these things over, and over, so at this point this issue could have been used on another Avenger, and felt less wasted. This event needs to bring something big soon, otherwise it runs the chance of being utterly forgettable.