AXE: Judgment Day #6: Yea, Though I Walk Through the Valley of the Shadow of Death… 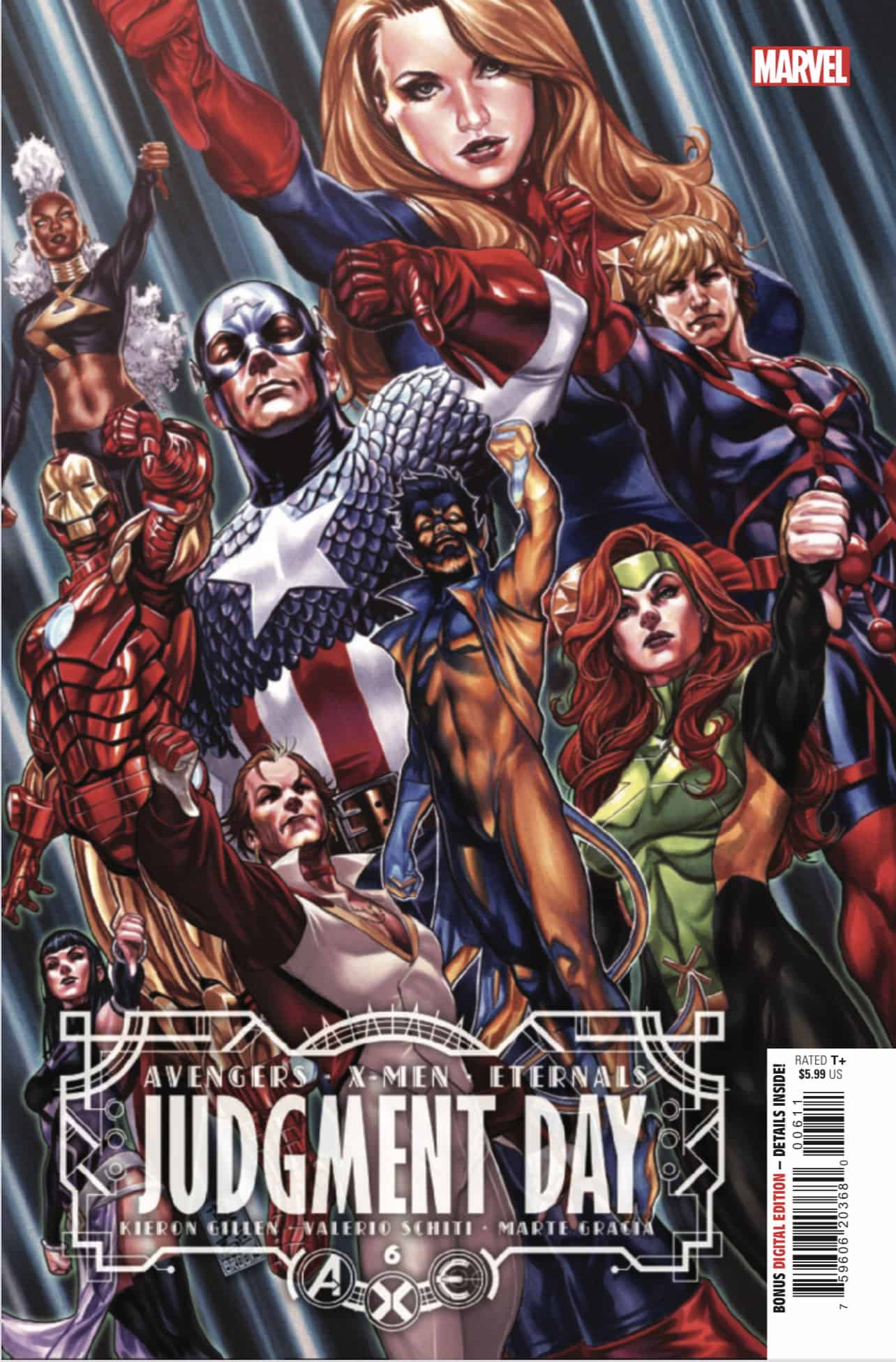 The apocalyptic finale of the event of the year. It’s not that nothing will be the same again – it’s that unless heroes can find a new way to be heroes, everything will be nothing forever.

This is it. We have finally reached the final moment where the earth, and all of those who reside upon it, from the reborn Celestial that was once Avengers mountain. We’ve seen so many heroes pass judgment, and those who haven’t. Can the Avengers, X-Men, and the Eternals convince this reborn Celestial that the Earth is worth saving? Well, you’re still here, so the answer is yes.

I’ve grown quite fond of Gillen’s work at Marvel, especially the work that he’s done on the X-Men. I would consider that to be one of the highlights in the post No More Mutants era, and not thinking he could outdo himself. Then he, and artist Esad Ribic relaunched the Eternals to the modern Marvel universe, and he killed it. Everything I wanted from the X-Men during Hickman’s era saw fruition during these 15 issues he’s given us over the last couple years. Gillen’s created a society full of potential, giving these Kirby cast-offs, that despite being a part of the Marvel universe since 1976, and has less than 100 issues published, so giving Gillen the reins to an event that bodes to have an insightful look into what makes some of Earth’s mightiest tick. Is there a hero out there that exemplifies the selfless abandon to give hope to those most vulnerable. Does it pan out?

This event has had some really great moments, and gave us an insight to some of Marvel’s most stalwart, and heroes, and given us a moment where they’re faced with some of their most traumatic moments, and the ugliest parts of themselves, and how they’ve dealt with the darkest parts of themselves. Some of these times of judgment are full of pathos, while giving us cliffs notes of these moments, while others we’re just made to determine what it is that caused these heroes to either pass or fail their judgment. This issue touches on that, but it doesn’t seem to hit the mark.

There’s a lot left unsaid, like those six individuals that were introduced at the beginning. We still don’t know exactly what it was that purpose they served. Gillen was seeding how important they were to what was going on, but it just flopped for me. The entire world was on the brink of being destroyed, and then.. nothing. The pacing on this event is so erratic, it kept taking me out of the story.

One thing that doesn’t disappoint is Valerio Schiti, who is quickly becoming one of my favorite artists. He brings showmanship with a very clear vision. His designs for these characters are so top notch, and fashionable. I really love the Annie Lennox inspired look Starfox. He’s the “eternal of love”, and his androgynous appearance, depicting this androgynous being that exudes charisma. Kudos

Solid event, came in like a lion, with some nice character development, with some stunning art, but the finished with a whimper. Unfortunately the team couldn’t stick the landing. Fortunately Gillen built a solid foundation, leaving loads of stories to be mined from his work here.

AXE: Judgment Day #6: Yea, Though I Walk Through the Valley of the Shadow of Death...