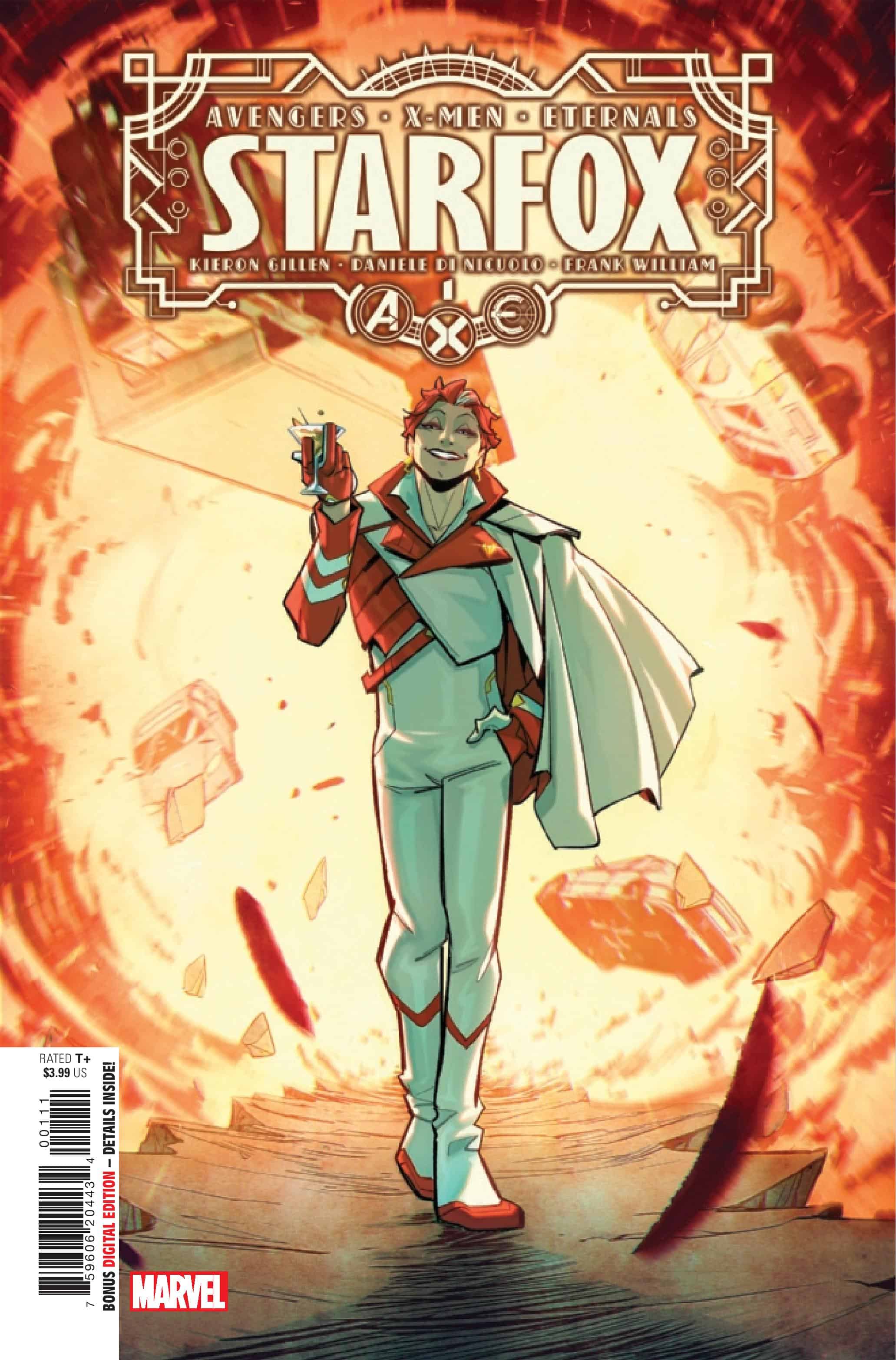 Eros the Eternal! Starfox of Titan! The equal of his brother Thanos, matching his achievements every step of the… What? Oh. But you know what they say. Come the hour, come the…intergalactic layabout who’d rather have a drink?

At least if this is Judgment Day, he won’t be around for a hangover tomorrow.

You know him by many names. Eros, of Titan. Starfox of the Avengers. Son of Alars, aka Mentor, and Sui-San. Brother to Thanos, consort of Death, and with this event we have Eros, Prime Eternal. Kieron Gillen has done a lot with Starfox in the very few issues he’s been used during this event, but already it feels like years of development will be crafted by the time this event is over. While the event has become a tad murky, and sloppy, it’s these issues that focus on one character that I find to be the strongest pieces of this very large puzzle.

With this issue we get to catch up with Starfox, who has noticeably been missing from Marvel Comics since his demise in the opening arc of Donny Cates’ Guardians of the Galaxy run, where he was used as a means to return Thanos to the land of the living. We saw at the end of that story that both of the Eternal brothers would perish in order to save the universe from Thanos’ and Hela’s plot to have Death, or more accurately, the Goddess of Death, to rule everything. Clearly that didn’t work, but because of the events that unfolded there, and due to the facts on how Eros was born, he was imprisoned in the Exclusion, with the rest of the trouble Eternals.

Here’s a little history lesson for those who are not in the know on Eros. Eros is the second child of Mentor and Sui-San, and one of the very few children that were born from Eternals, and because of this, he was already ostracized by his uncle, Zuras, the Prime Eternal. Zuras is Alars’s brother, and they are the children of the Eternal, Kronos. Kronos wanted to evolve his species so much from what their Celestial directives intended for them to be, that he would cause himself to evolve past the point of physical existence, and now he is one of the Universal cosmic beings, with an unspecified control on time. This caused his two sons to have two very different views on the future of their race, and their purpose in this world.

Whereas Alars embraced that they are capable of change, Zuras went the opposite way, and became almost a zealot in this belief. The two brothers’ ideologies are both so incompatible, that they even went to war with each other. Zuras’ forces and resources were too much for Alars, that it was quickly, (well, as quickly as anything that is Eternal can be), overrun, and forced to surrender. As punishment, Zuras sentenced Alars and his followers to leave the Machine, and create a colony on Titan. From here, the two lovers would put their faith to the test, using the technology left to them from Kronus’ experiments to give life to an Eternal child. That child would be Thanos. Upon seeing the horror that Thanos became, even at a young age, the two tried again, this time giving birth to Eros, the Eternal of love, hope, and compassion. It was these gifts that would epitomize Starfox’s role in the universe. Unfortunately these gifts would not be used to the best of their ability until it was too late.

I really love what Gillen’s doing here, because with Starfox, oftentimes his abilities to stimulate the brain’s pleasure centers would overshadow his accomplishments. They’re problematic, and can often lead to such things as if he used his abilities on people to take advantage of them. But here, it’s not pleasure, but love, hope, and compassion that his powers affect. There’s something almost poetic about this, and gives you a sense of something more than what is.

Daniele Di Nucuolo is on art duties, and their work here is a great take on Starfox. He really captures the light, and effervescent playfulness that Eros is meant to embody. You can see the sly smile at the corner of his mouth, and a glint of mischief in his eyes. Eros is not the type to take things too seriously, and it’s a nice departure after his apparent demise by his brother taking control of his body in order to resurrect himself. You can tell the artist really gets it. The action scenes are fresh, and energetic, and you get a sense of if this weren’t the end of the world, Starfox would be having the time of his life. I love his take on Starfox’s new look that Valerio Schiti gave us. Where Di Nucuolo falters is at the times when the tone should be more somber, and contemplative. I can’t wait to see what worlds he’ll take us to next.

Kieron Gillen and Michele Di Nicuolo give us a character study on Starfox, Earth’s current Prime Eternal, and what he’s doing to save the rest of humanity, as he, the Avengers, and Eternals from the destruction that the Mad Celestial has decreed. Mixed with a staccato like style, that’s slick, and moves. What Gillen’s doing here has been the most character development I’ve seen for Starfox since his run on Roger Stern’s Avengers from the early 80’s. Some good stuff here.