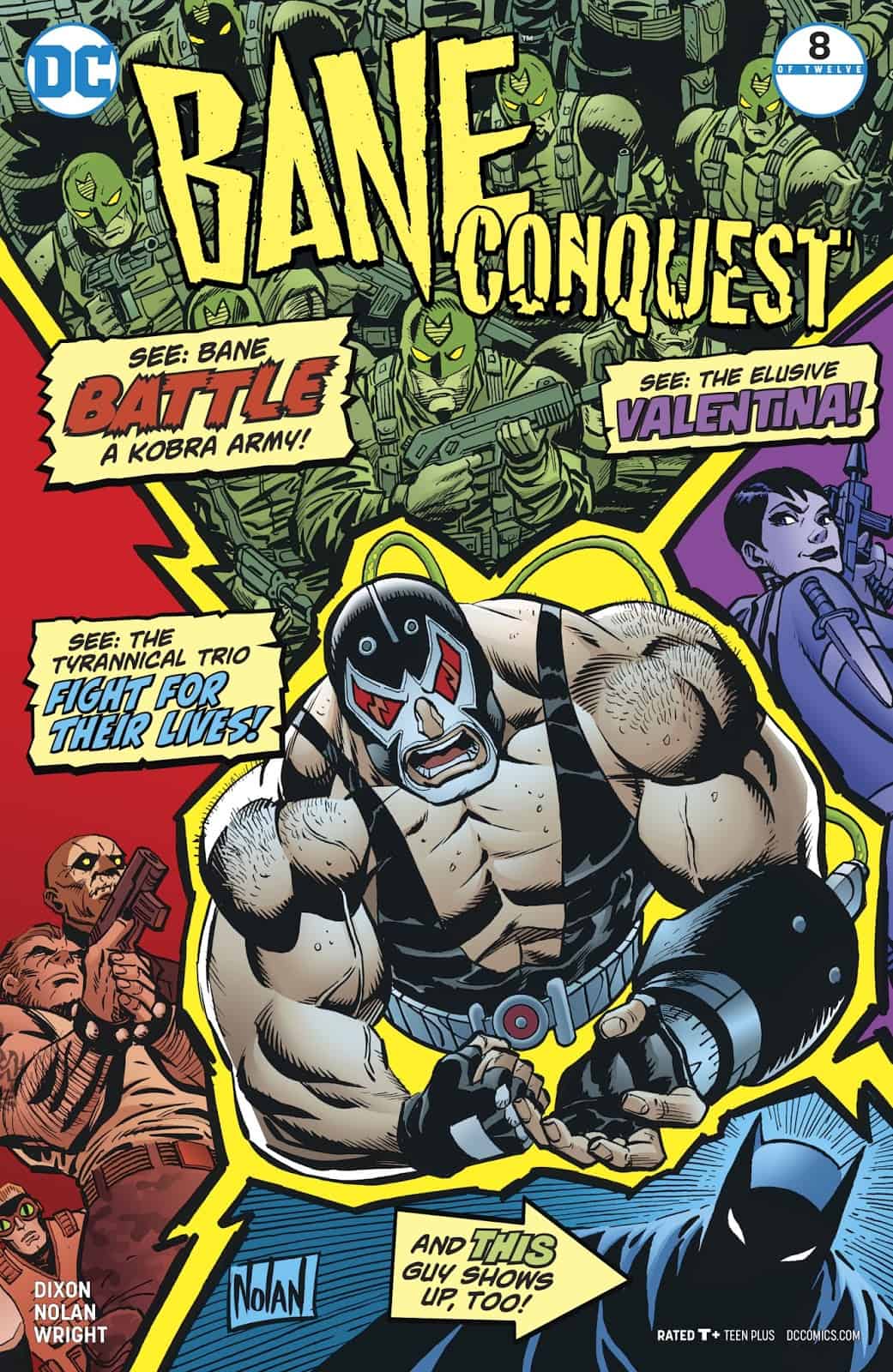 Bane Conquest is a new miniseries by the team that made 90’s DC great, Chuck Dixon and Graham Nolan. Bane is on a mission to control the underworld across the earth by strangling out criminal leaders and forcing them to bend to his will. He, aided by his subordinates Zombie, Trogg, and Bird, has spanned the globe with varying degrees of success. 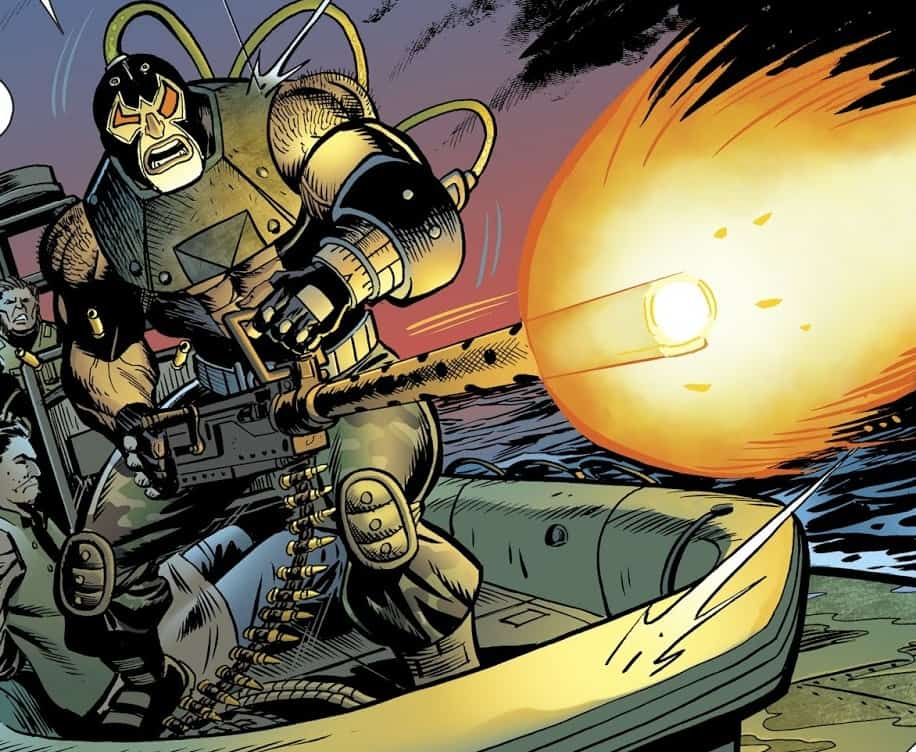 What You Need to Know:
Bane, the beast of Pena Duro, the former ruler of Santa Prisca, the man who broke the Bat, is on the warpath, trying to consolidate all the worlds criminal enterprise under his control. Bane has had an uneasy alliance with Dionysus, a technophile who appears to be a head built into a cyborg body. Despite numerous attempts to betray Bane and his team, Dionysus has a new scheme for world supremacy and Bane and this team are attempting to assimilate Kobra, a giant secret organization/ cult that has worldwide reach and the resources to accomplish Bane’s goals.

Last issue we saw Bane attempt to kill the Naja-Naja, the leader of Kobra, in a plan to seize control of the shadowy criminal organization. When the Naja-Naja dies a baby is born at the exact second with a birthmark, Kobra is vulnerable and leaderless while they try to find they try to find the baby, often wasting time and resources with infighting and scheming to gain rank while unsupervised. They managed to get lucky and the Naja-Naja fell and died while fleeing them. 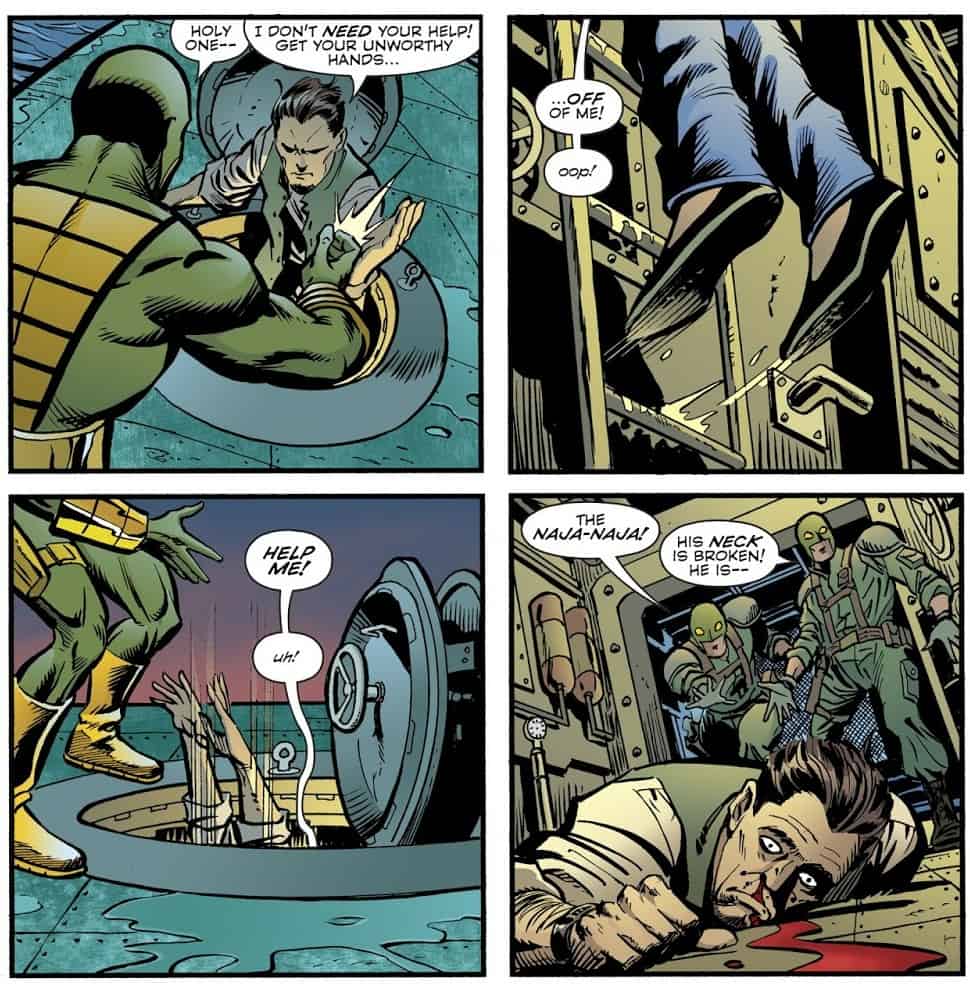 Kobra has found the baby and deployed the assassin Valentina to collect him in the name of Kobra, Bane and his team have similar ideas. As Valentina runs with the baby she reveals a Kobra strike team has been deployed. Bane and his associates will surely be dead before they can achieve any of their goals. 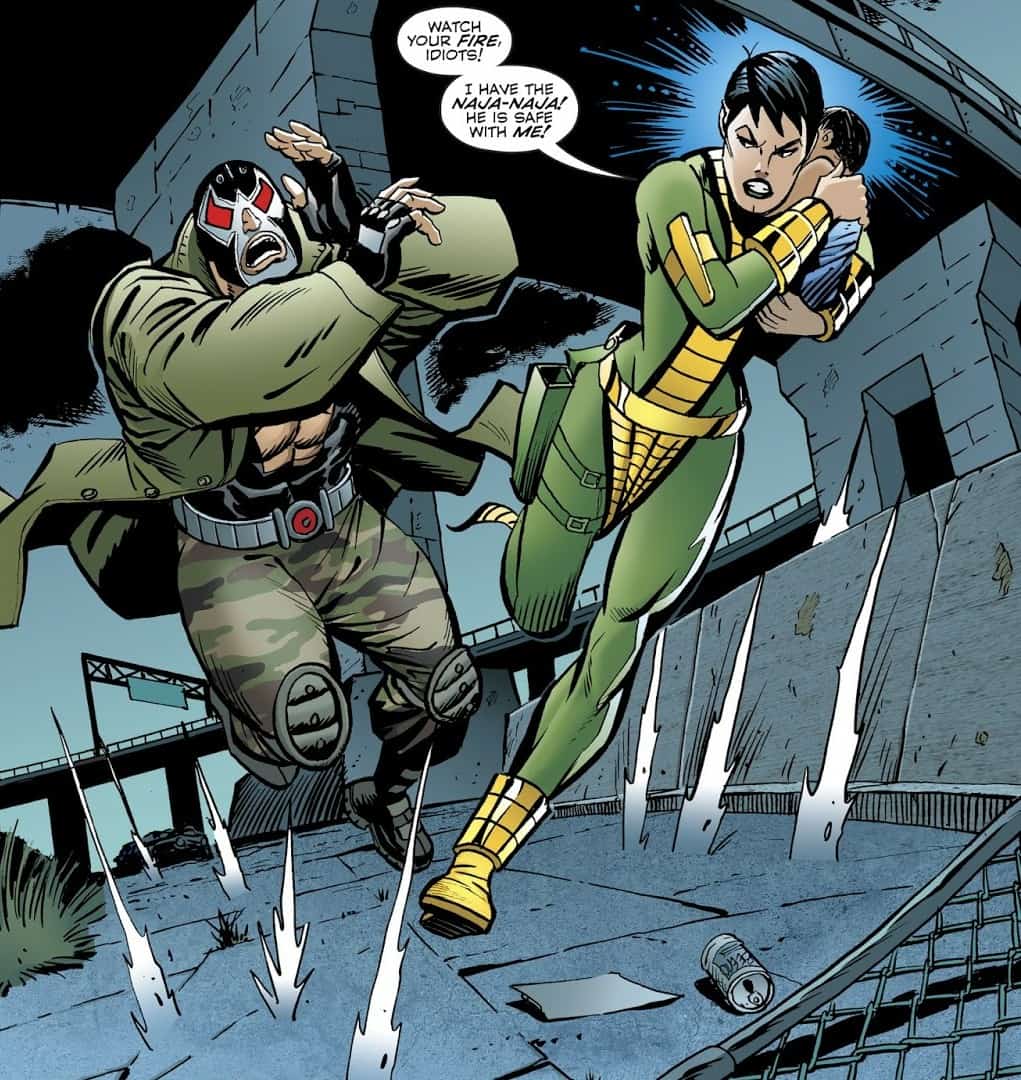 What You’ll Find Out:
We open on Valentina fleeing Bane with the baby amid a hail of gunfire, as she makes it to her strike team in their airship she says they need to get the Naja-Naja to safety, but kill Bane first. Bane dives for cover and calls for help. His team is inbound to bail him out in a speeding van on an overpass, they bail out and smash the van into the Kobra airship, which is apparently undamaged. 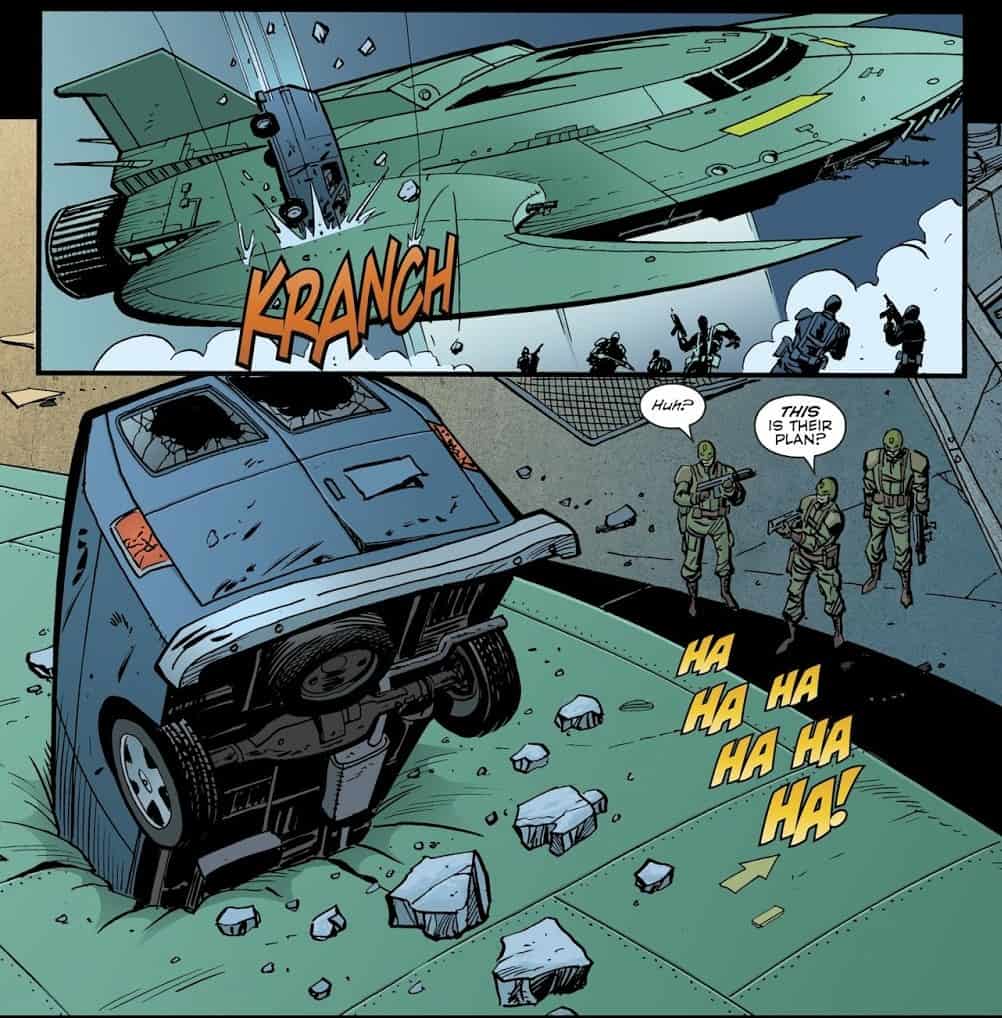 The Kobra strike team laughs at the ineffectual attack, Bane asks if Trogg is joking, he replies yes it’s a big joke as he pulls a detonator out of his pocket and detonated the van, blowing the wing off the airship. Bane curses him, saying if the infant dies they will have to restart the whole process. Suddenly Valentina speeds by with the baby on a flying motorcycle (Kobra has all the cool toys) as she rides away she tells the baby about his new life as leader of the giant cabal. He just cries, he’s a baby. 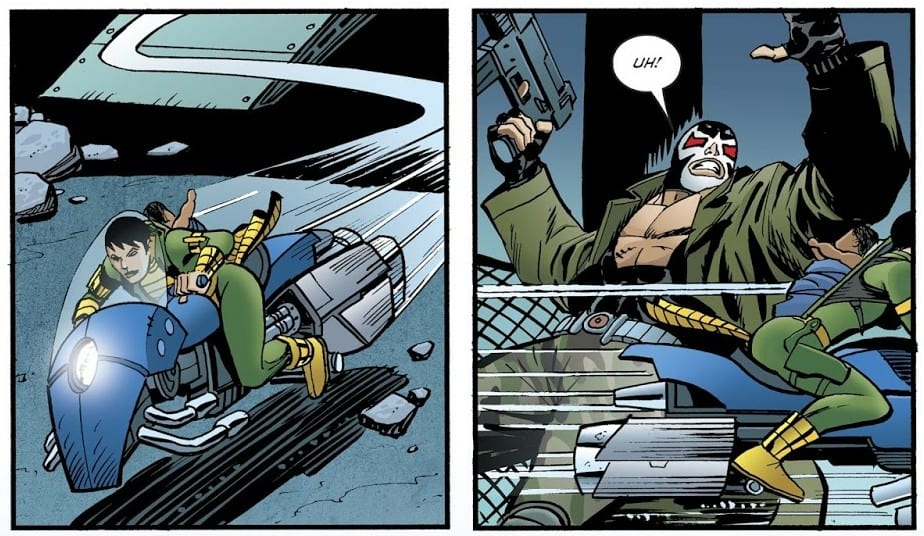 Later Dionysus is patching up the team while they discuss went wrong, although Bane is clearly the leader her does hear out his subordinates, Bird says women are Bane’s Achilles heel, he doesn’t like to hurt them if he can avoid it. Trogg appears to be drinking his pain away. 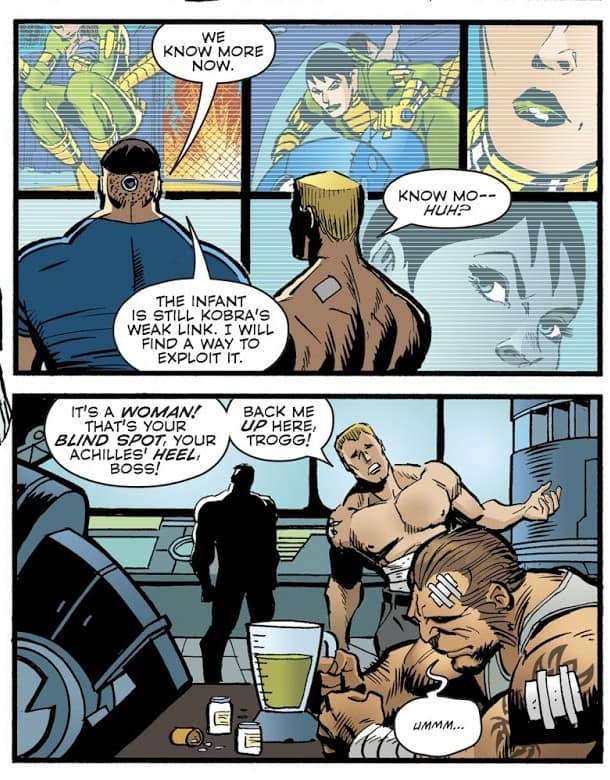 We jump back to Kobra, Master Rampo is appointing Valentina regent and executor of the will of the Naja-Naja, until he is old enough to make his own decisions she is charged with raising him and catering to his whims. They discuss the turbulent nature of the changeover, and Valentina says she has put some thought into it. They just need to give their cohorts a common enemy to hunt down. Bane is in the sights of Kobra! 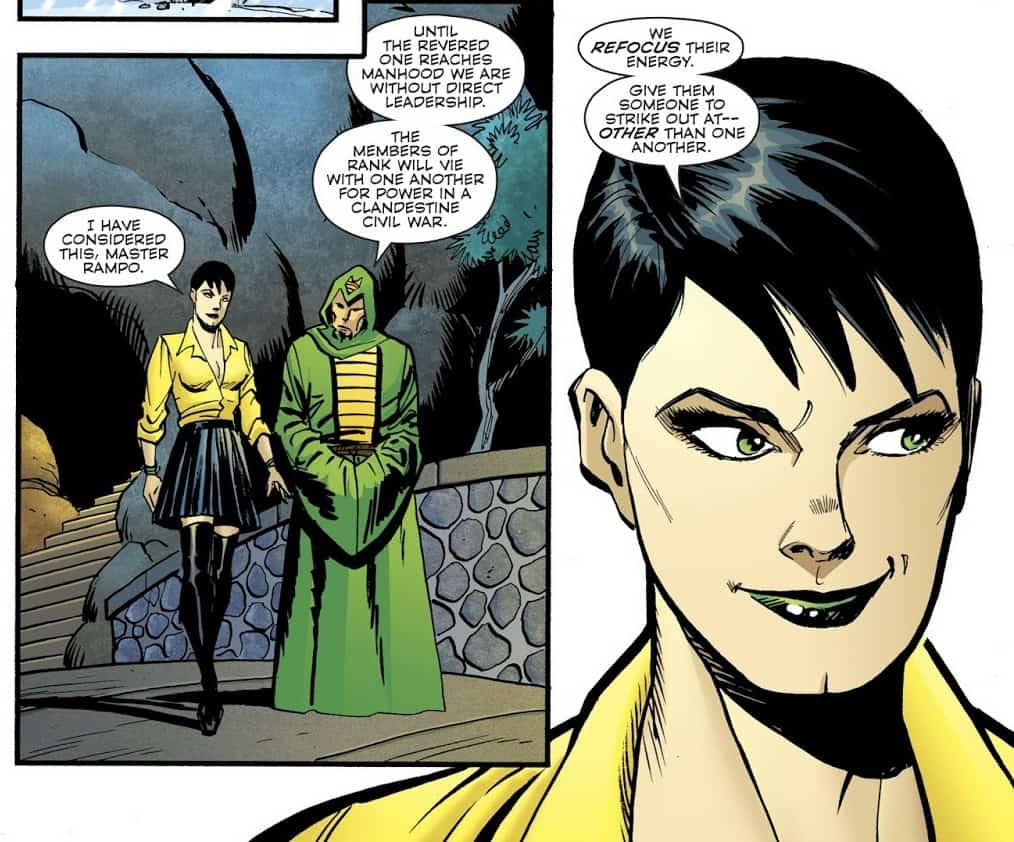 Find out what happens next in Bane Conquest #8 on sale now!

Plot:
Chuck Dixon is the man who created Bane, and as always he has nailed the tone of the villain. It’s really nice to see the return of Bane’s team, whom we briefly glimpsed in the I am Bane arc in Batman, and were featured heavily in Dixon’s biggest Bane event, Knightfall. I’ve always liked the way Bane treats his team as valued members of the group, listening to their thoughts and giving them credit for ideas, he’s definitely the boss but a good boss knows when to listen. The scheme is a bit ambitious but that’s what Bane does best, he did break the Bat after all…

Kobra is represented well, huge, unstoppable, with lots of tech but a bit off, they worship the Naja-Naja as a demigod and it shows. Although originally created by King Jack Kirby himself in the 70’s Dixon really made the organization his own in the 90’s. Valentina is an interesting new character (I think she’s new, only other Valentina I can think of in DC is Negative Woman/ White Queen) who is cutting a path of destruction through Bane’s empire.

This series has all the cheesiness and violence of a big budget 80s action movie, which is right up my alley. The end of the issue teased big stuff for next issue I can’t wait! 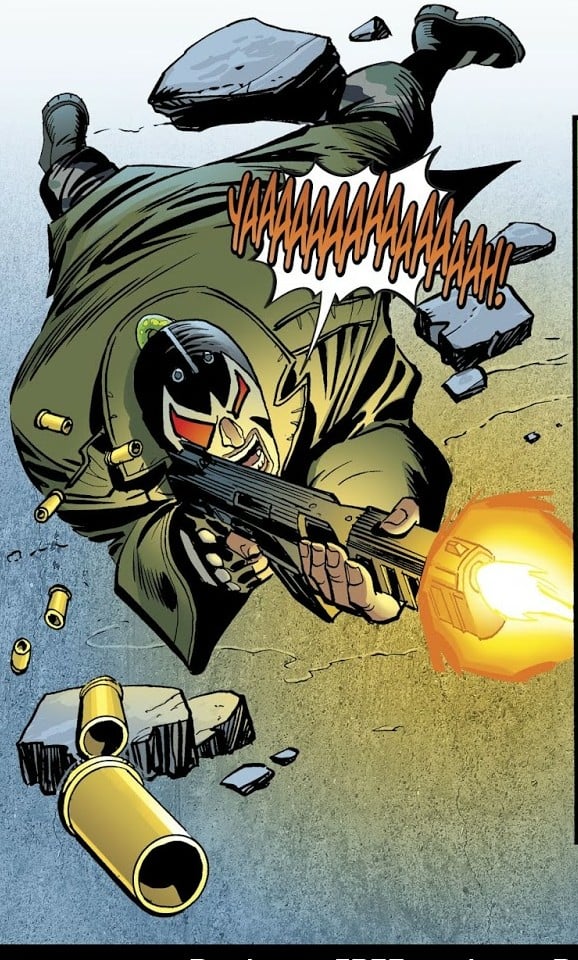 Art:
Graham Nolan illustrated some of my favorite 90’s Batman and Bane issues, I’ve always liked his style and he was a huge selling point for me when I was a kid. The art in this series is great, especially the action sequences.

Honorable mention: great action panel when the wing blows off the Kobra ship. 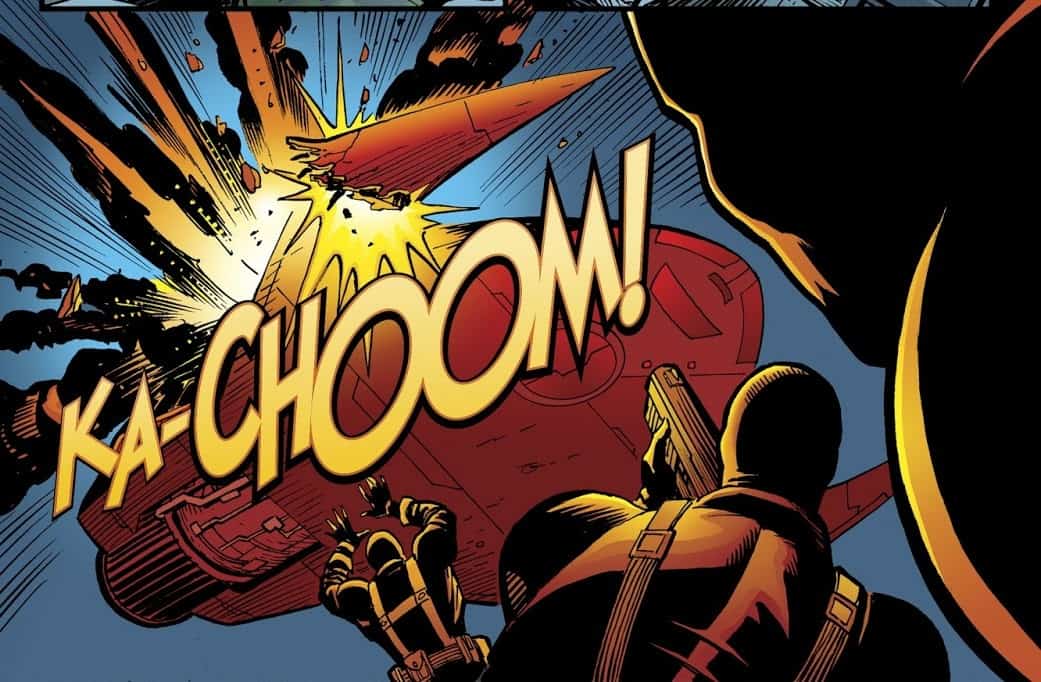 Rating: 9/10
Final thoughts: I’m really enjoying this series, I’m sad its past halfway over. Definitely worth a read if you were at all a fan of Dixon’s work in the 90’s.