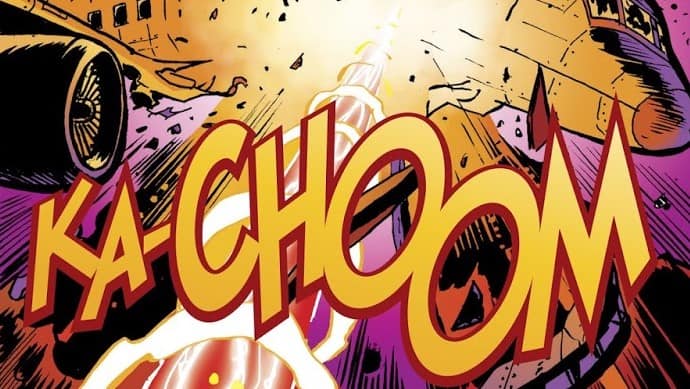 Bane has Kobra in his sights, but he can’t fight them alone, he’ll need a crack team handpicked from Chuck Dixon’s insanely diverse stable of characters, who will make the cut? Who will help Bane find the Naga-Naga?! 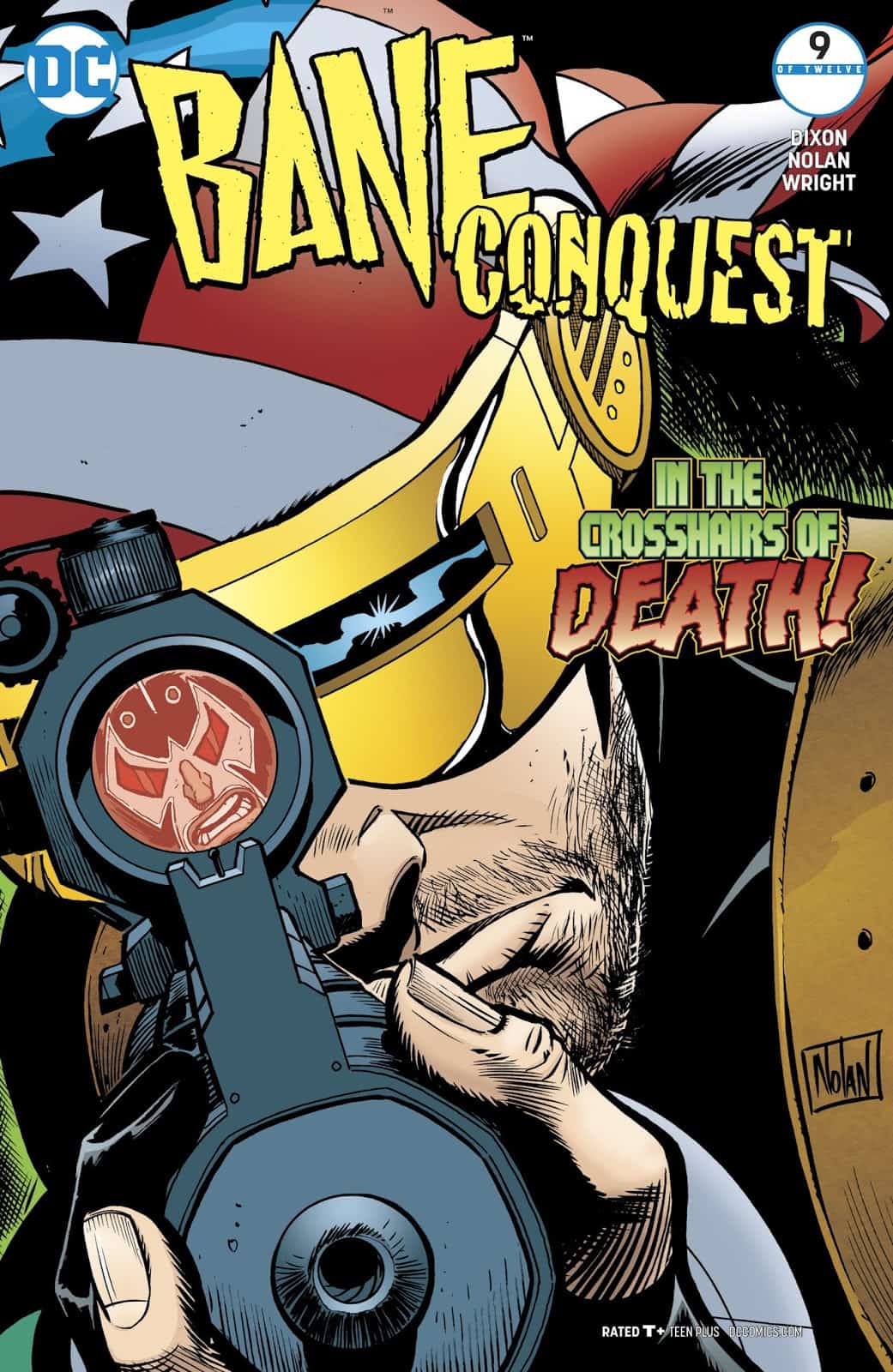 Bane! The man who broke the bat, famously brutal but fair ruler of Santa Prisca and the only person to ever survive escaping Pena Duro, (actually I think the Bat did in I Am Suicide, I’ll have to go back and check) now Bane has set his sights on Kobra in a bid to control the underworld. Displeased, Kobra has struck back, but what doesn’t kill Bane, just makes him hunt you down and snap you like a twig. This time it’s personal!

We open on a familiar husband and wife assassin team setting their sites on a nameless general or dictator, just as Gunhawk gets ready to take the shot, Bane steps in front of the gun. (awesome way to get accidentally shot at close range with a sniper rifle, just saying) Bane tells Gunhawk and Gunbunny he’s got a job for them if they want it, pays 10 million dollars, Gunhawk accepts and shoots the general as they walk away. 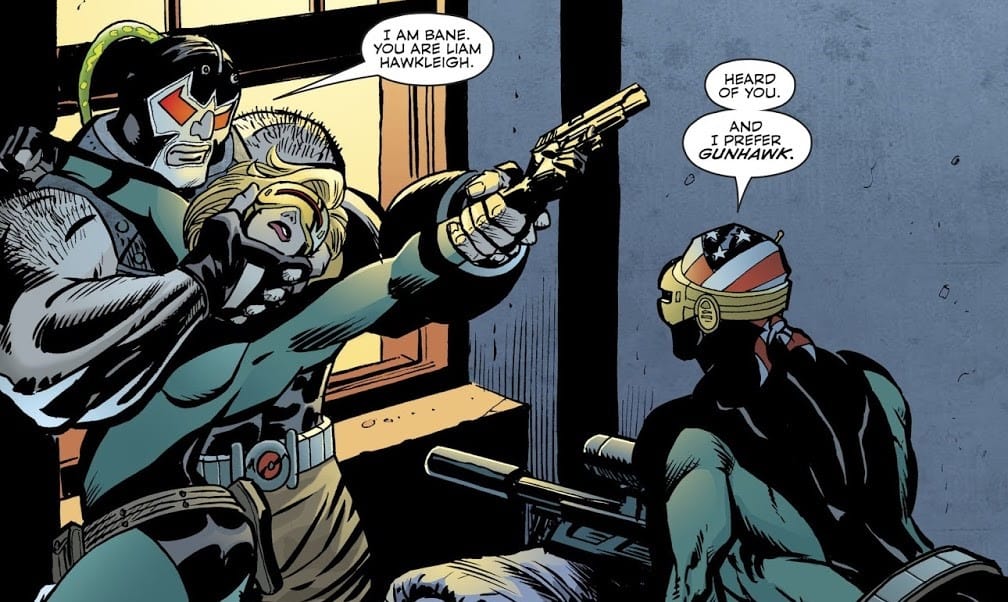 Literally, the first thing they teach you in any gun safety course is don’t run out on the range

We cut to an airfield, where Bane’s ally Bird is testing some insane weaponry, he vaporizes an airplane with a huge grin on his face. He tells them he’ll take a hundred, and drives off grinning. As Bird and Zombie drive away Steppenwolf reveals himself as the man behind the tech, Apokolips is on Earth?! Who cares about Kobra there’s a freaking New God hocking Godkiller level tech in an abandoned airport. 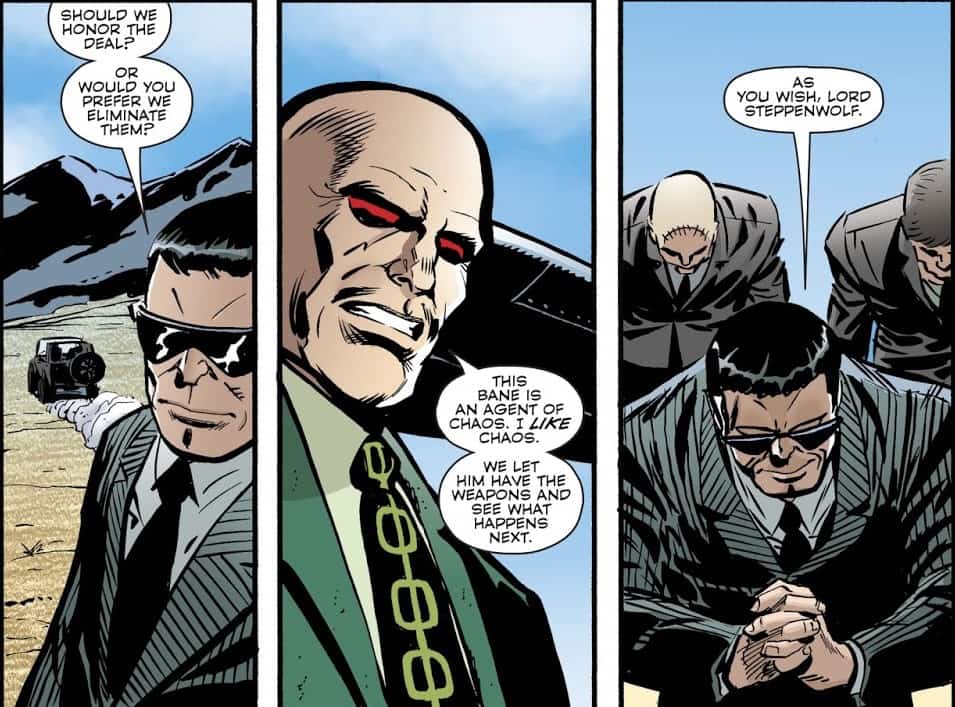 We pull away to a high stakes blackjack game in Istanbul, a man in white is winning heavily, a little too heavily, Bane shows up just in time to stop the assassin’s blade from killing King Faraday! Next, we pop over to Nigeria, where Bane saves an unnamed man from execution, and in Paris, a thief runs across rooftops dodging authorities, just as he makes his getaway he’s nabbed by Zombie. Bane’s team is coming together!

Will Bane and his team find Kobra? Find out for yourself, nab a copy of Bane Conquest #9 today!

I liked this issue for the most part, but disliked the way it was paced, jumping from team member to team member in a scene that could’ve been 3 pages, not an entire book, I understand they’re setting up for the finale, but the single issue suffers for it slightly. All in all, it’s a good issue and a bit fun (I liked the twist in the interrogation at the end) but ultimately a bit toothless. 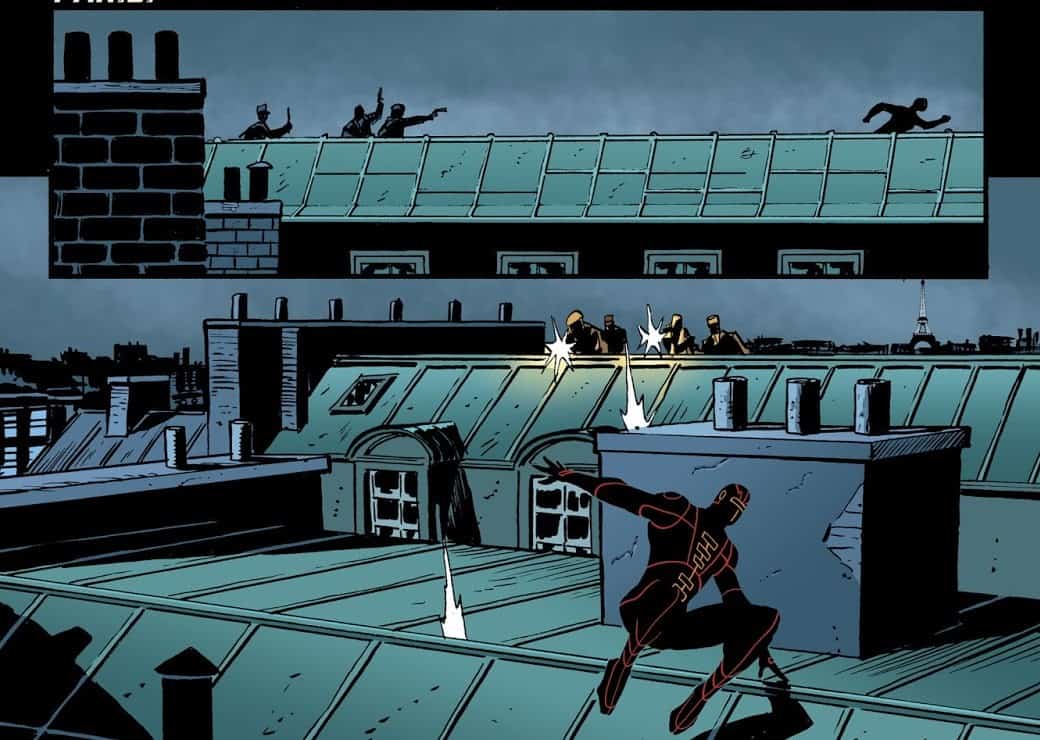 Some of the characters included turned my head a bit, from Gunhawk and Gunbunny (first seen fighting Azbats in a hospital, prompting the first use of the armored Batsuit he is best known for) to friggin Steppenwolf, a New God facilitating arms shady arms deals with Apokolips tech is a little insane, I wonder if we’ll play into that later? Oh man, I do hope we maybe see the order of St Dumas, maybe even a new Azrael for Bane to fight?
That would be cool.

I digress, this series is clearly a love letter to the 90’s, and I love it for that! Anyway, King Faraday was an interesting choice, the once leader of the Suicide Squad (he’s Waller’s predecessor) showed up really recently in the Secret History of Task Force X arc (not a great arc) it’s strange to see him so shortly after. I do wish they had identified the other two people they picked up, one of them might’ve been a new version of the Black Spider, his costume looks similar to the second, Black Spider, who was killed by Crispus Allen in Gotham Central if I recall correctly.

Not a terrible issue by any means, just not overly compelling on its own, as a larger part of the story I’m sure it’ll work fine, just largely forgettable in the short term. That said the overall story is great and based heavily on lore I’m veeery familiar with if you couldn’t tell.