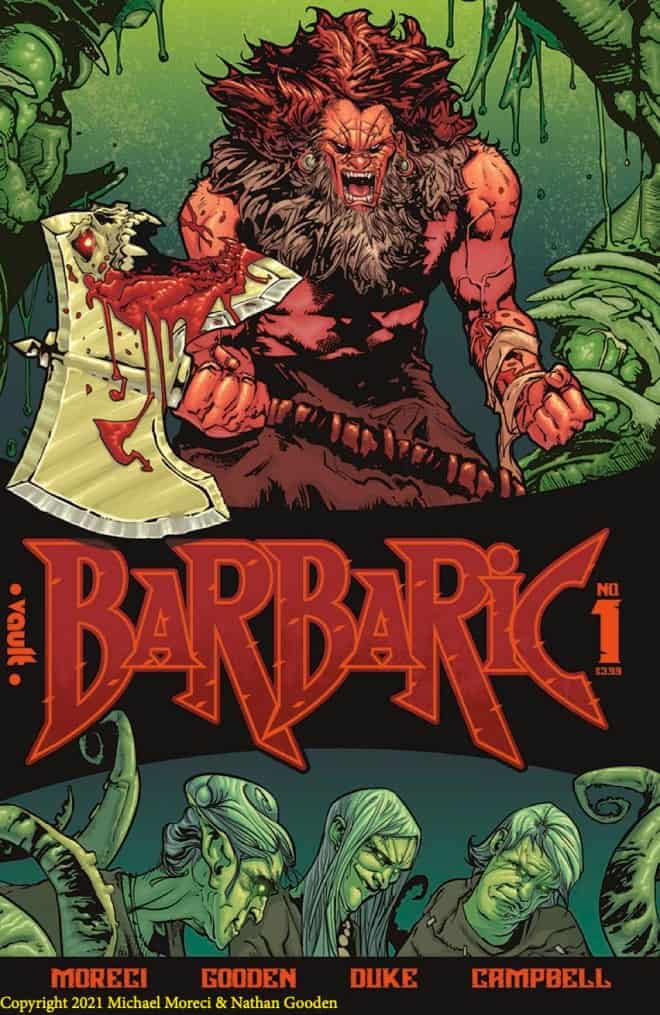 Meet Owen the Barbarian. He isn't very nice, but he's been cursed to be nice anyway. 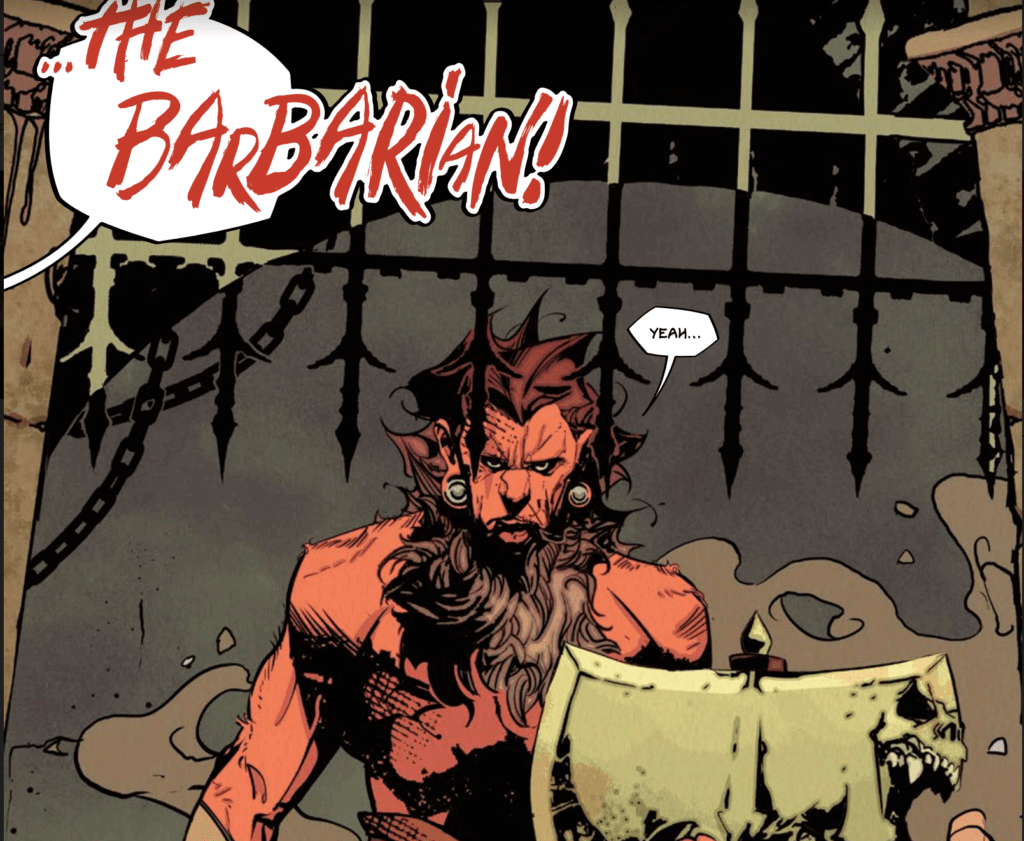 Which sucks, because all he wants to do is fight and kill and drink and screw. You know, barbarian things. But along with his mystical skull-faced talking axe, Axe, and a witch, he might just wind up being the hero the realm needs.

Even though he'd rather do anything but.

What if Conan the Barbarian were forced to do good?

That’s the premise of Michael Moreci and Nathan Gooden’s Barbaric, on sale now from Vault. Barbaric takes every good sword and sorcery and/or barbarian trope and turns it on its ear by making its protagonist a reluctant (read: cursed to be) good guy. In doing so, Owen the Barbarian starts learning that hey, maybe we don’t all have to kill everybody, burn anyone suspected of being a witch, or, in short, not be a bastard all the time.

Even though he really, really wants to.

Moreci’s genius turn in Barbaric is the way in which readers can tell that despite his curse restricting him from enjoying in his bloodlust, Owen really, really wants to indulge in his basest impulses, just like any good barbarian would. But by being kept in the good guy zone (so to speak), he comes to realize the tediousness of that lifestyle, and so despite wishing he could revert to his old ways, he never will. Ever acting as his conscience is his trusty skull-faced axe Axe, who reliably informs Owen who is worthy of killing and who isn’t. Slavers, murderers, and rapists are fair game. Guys caught stealing food to feed their starving family? Not so much. Axe is a pretty funny sidekick, most especially because the more he kills, the more drunk he gets on blood.

Beyond the basic set-up, Owen’s world is a fairly standard swords-and-sorcery realm, but readers shouldn’t be let down by that, because poking fun at these tropes is the whole point. But don’t let that fool you, Barbaric is a HEAVILY violent and graphic comic, and isn’t for the faint of heart. Co-created and drawn by the absurdly talented Nathan Gooden (an artist to watch out for; he’s definitely going to be on the rise coming off this book), there’s barely a page that doesn’t have some sort of comedically graphic violence afoot. But Gooden brings a lot more than that. It would be easy for Owen to simply fill out the usual brooding stoicism of a Conan-type brute each page, but Gooden gives him a subtle world-weariness that brings a certain weight to the character. He’s also great at crafting unique and individualized background characters for Owen’s world; no one looks alike or indistinct. That’s an important trait for an artist to have, and one that suits the wild and woolly world of Barbarian like a (bloody) glove.

There’s a lot of mystery left to go, though: what’s the witch’s story? Will we find out more about the three crones who cursed Owen? What’s up with that demon cloud atop the monastery? And will Axe ever finally drink his fill? Check out Barbaric now for the answers!

Barbaric isn't a comic for everyone due to its over-the-top violence, but it's definitely a worthwhile read for those who have the stomach for it - or just like strong satire. Don't be shy, check it out now at your local comic store!