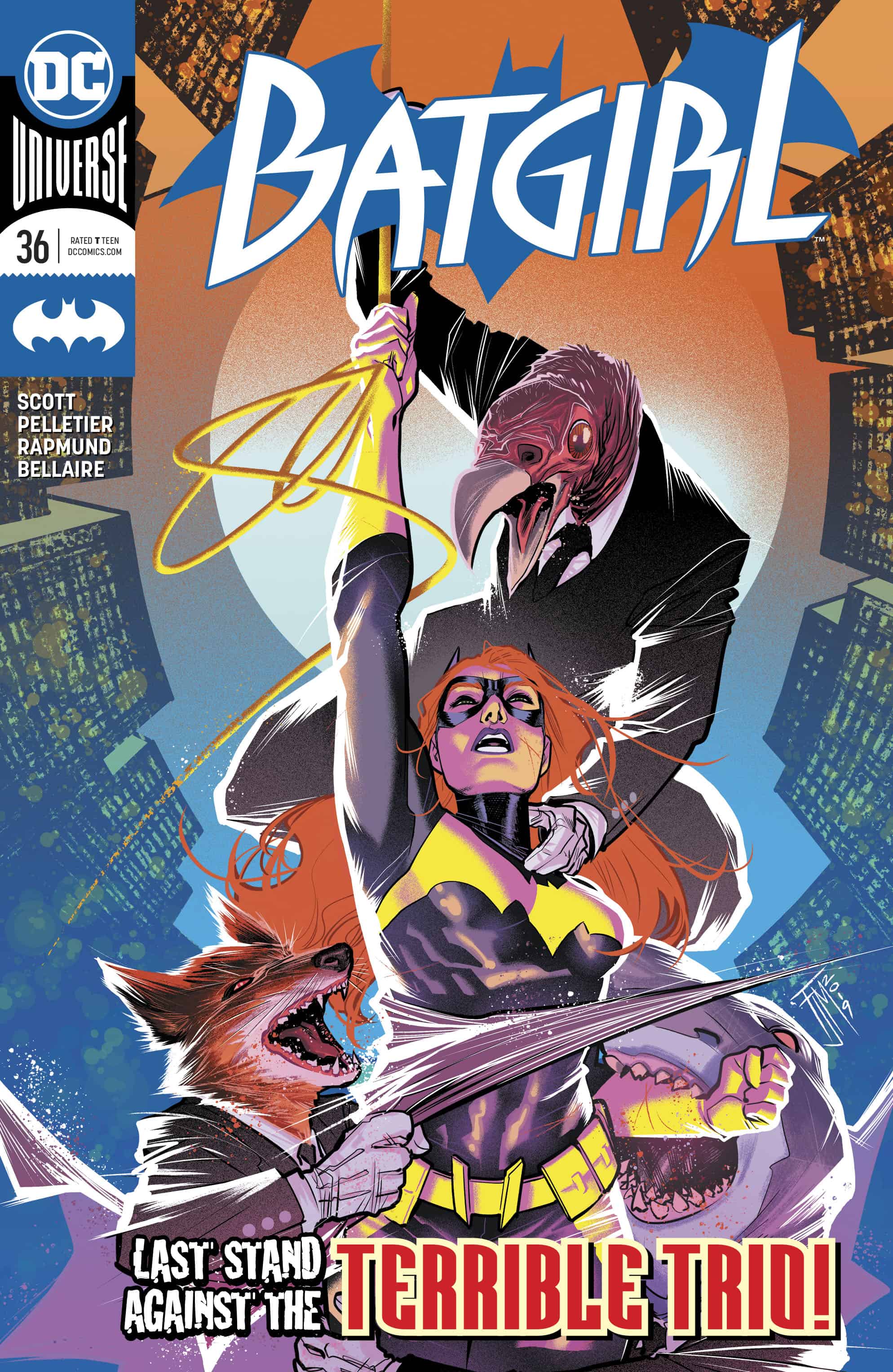 Batgirl versus two-third of the Terrible Trio - to the end! With the gargantuan Shark defeated last issue, Barbara turns her attention to Vulture and Fox. 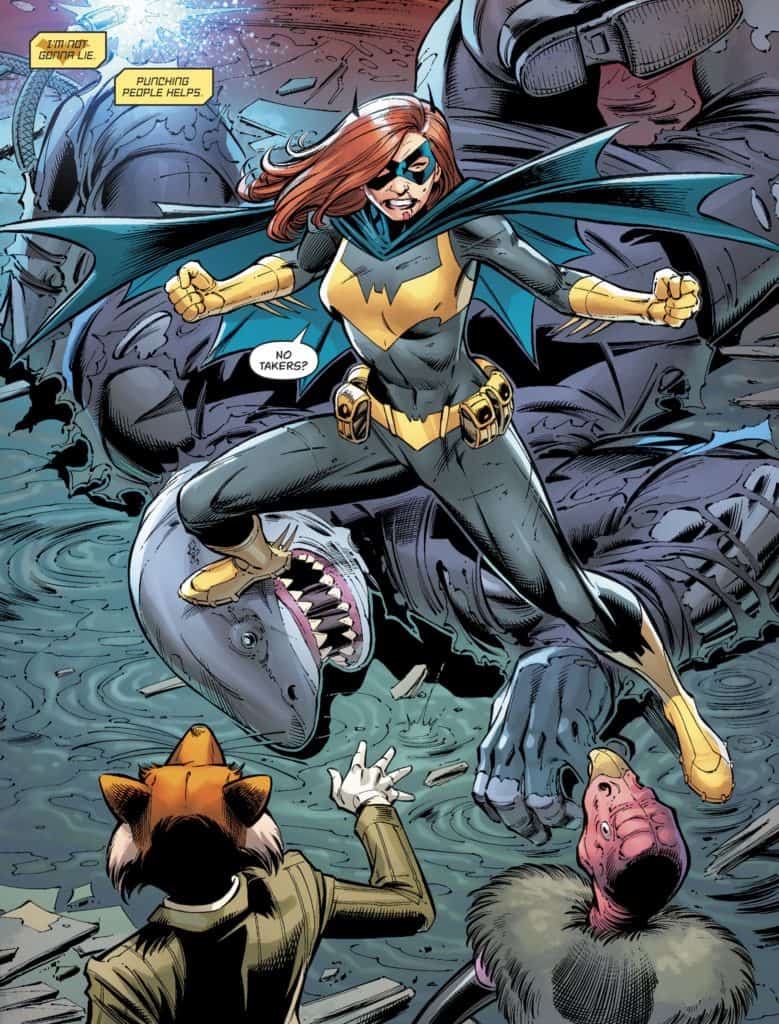 But in the midst of a quickly-spreading fire, Batgirl's first priority is to get the Trio's audience out before they're incinerated! 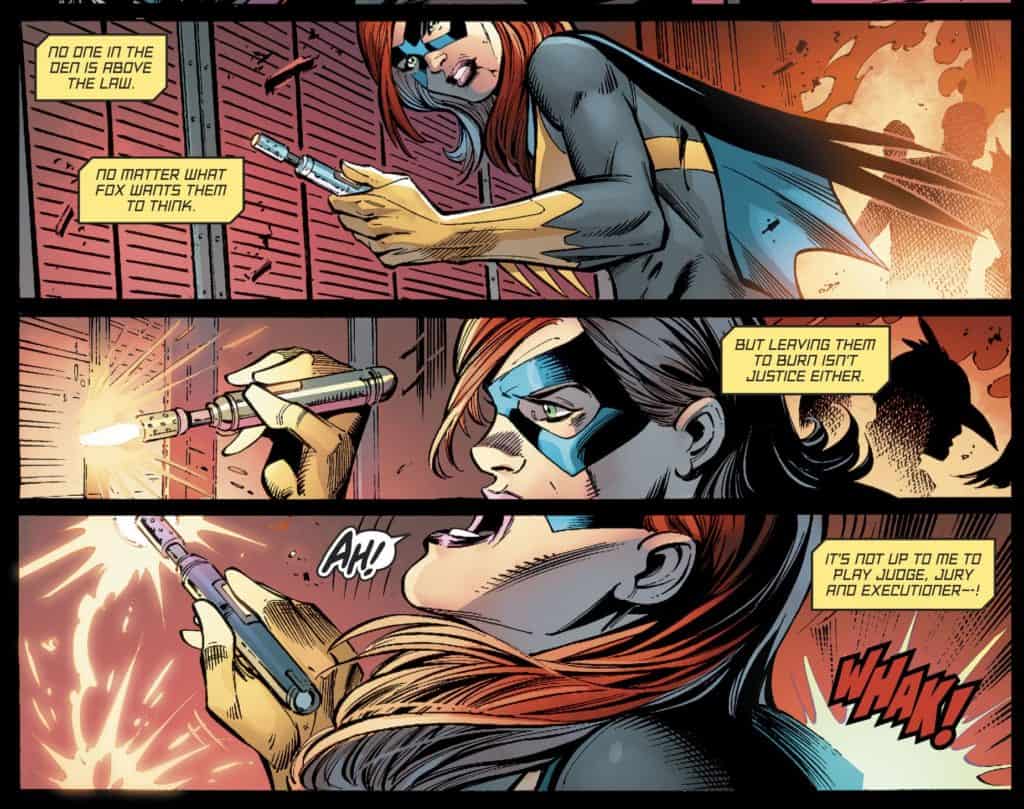 But Vulture has other plans, and they don't factor in ANYBODY getting out alive! 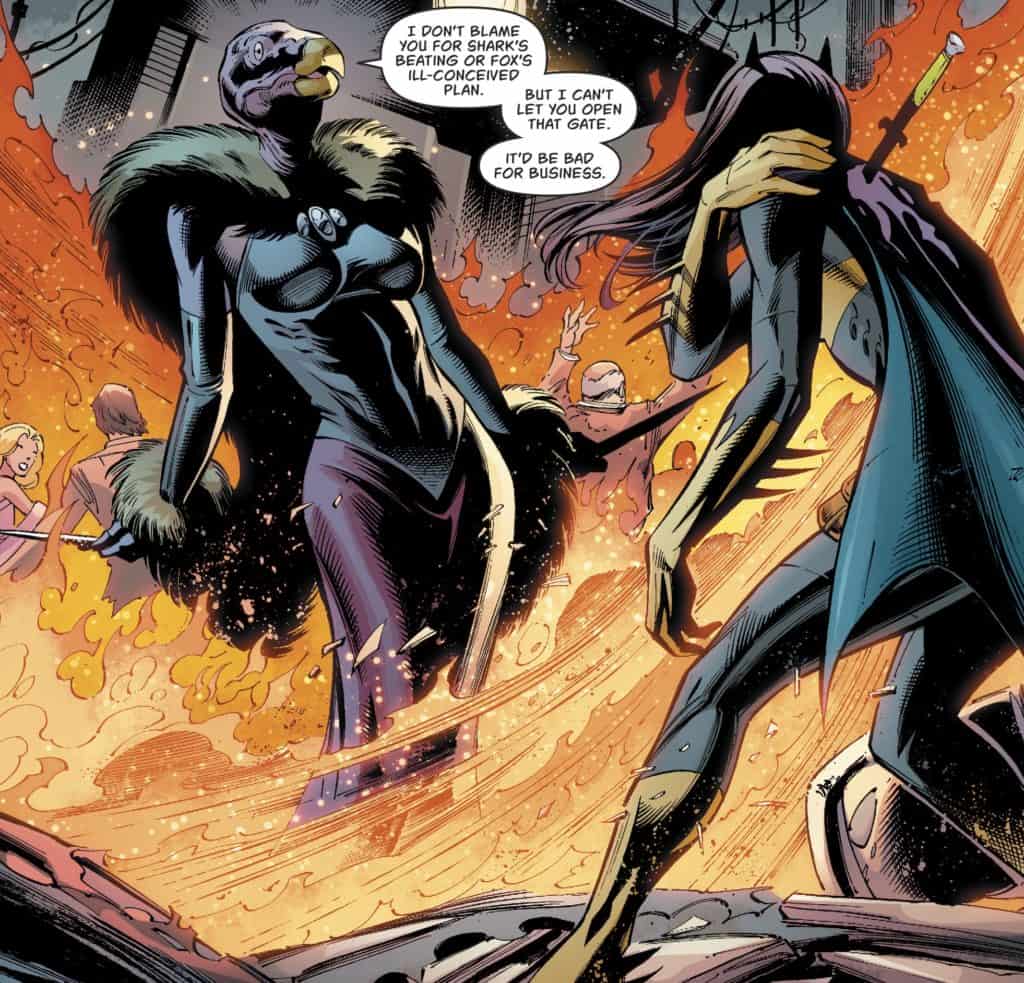 Writer Mairghread Scott closes out her year-long tenure in Batgirl’s corner of Gotham City with a bang. The action starts literally hot and heavy, and Scott immediately dives into the heart of what it means to be a hero. From the start, Barbara lays it right out: self-sacrifice in the face of any of all odds, fueled by the belief that, in her words: “90% of being a hero is believing in yourself.” She isn’t shy about it being a tad cheesy, but at the same time, an immutable truth.

And in Scott’s hands, Batgirl proves those aren’t just words. Confronted by Fox and Vulture, she opts instead to forego putting the bad guys to bed and instead focuses on helping the crowd break free – a crowd which, by her own admission, is made up of less-than-savory characters. But she refuses to let them fall victim to their own vices.

It’s straightforward, but it works, and that’s been the cornerstone of Scott’s run on this title. Batgirl isn’t motivated by her parents’ death, or some other tragedy. She does good because it’s in and of itself the inherently right thing to do. And what could be a more heroic gesture than that?

Batgirl’s nobility stands in sharp contrast to Vulture’s cut-throat capitalism or Fox’s base survival instincts. It’s interesting, then, that in the end the Trio’s third member – the mortally wounded Shark – chooses to play the part of valor, confirming Scott’s other long-running treatise in this series, that no one is solely defined by one trait about them. Without getting too spoilery, Batgirl winds up owing her life to him, in a stunningly thin brush with death – proving that there’s good in all people.

Artists Paul Pelletier and Norm Rapmund bring their A-game again this issue, proving once again that you don’t have to be a flash-in-the-pan “big name” artist to contribute decades’ worth of consistent and beautiful work. Their pages are bold and strong, moving the story forward at a clip that perfectly complements the quickly-rising stakes.

Of course, Scott and Pelletier aren’t leaving readers with mere platitudes about the heart of a hero on their exit. There’s also the business of having completely blown up Barbara’s life with the hostile takeover of Gotham Central Electric, which results in her losing the very company she founded. But it also wipes the slate clean for incoming writer Cecil Castellucci, reframing Barbara’s world from the ground up. It’s a great move, putting the toys back in the box, freeing Castellucci up to take Barbara in virtually any direction she wants.

Mairghread Scott more than capably concludes her tenure writing Batgirl, with a gripping and taut thriller that doubles as a thesis on what makes a hero. It is, in a lot of ways, exactly what DC has claimed to be striving for in the "Rebirth" era of its storied history.