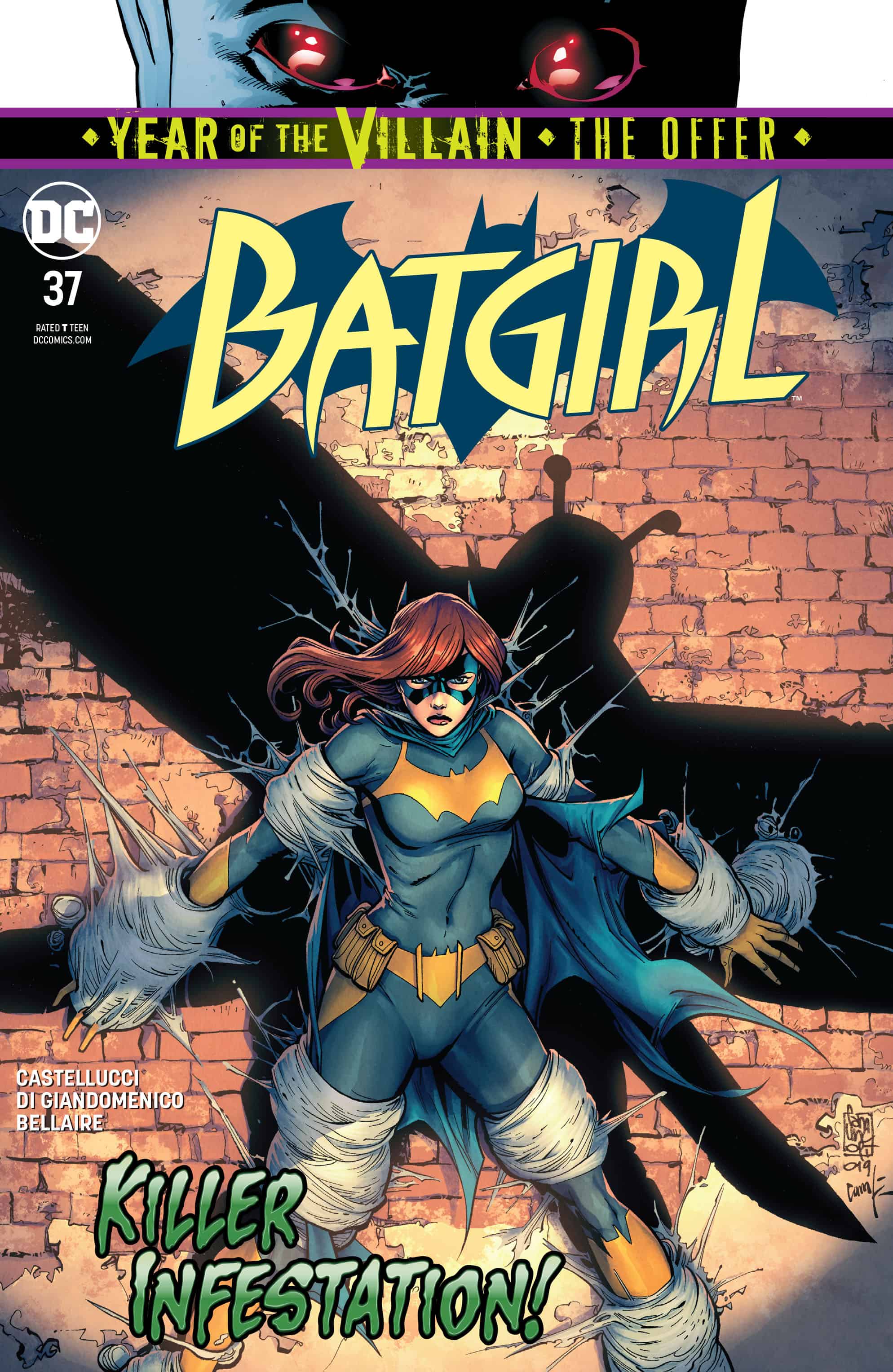 The Terrible Trio are back! They find a secret cache of technology hidden deep within the mountains... 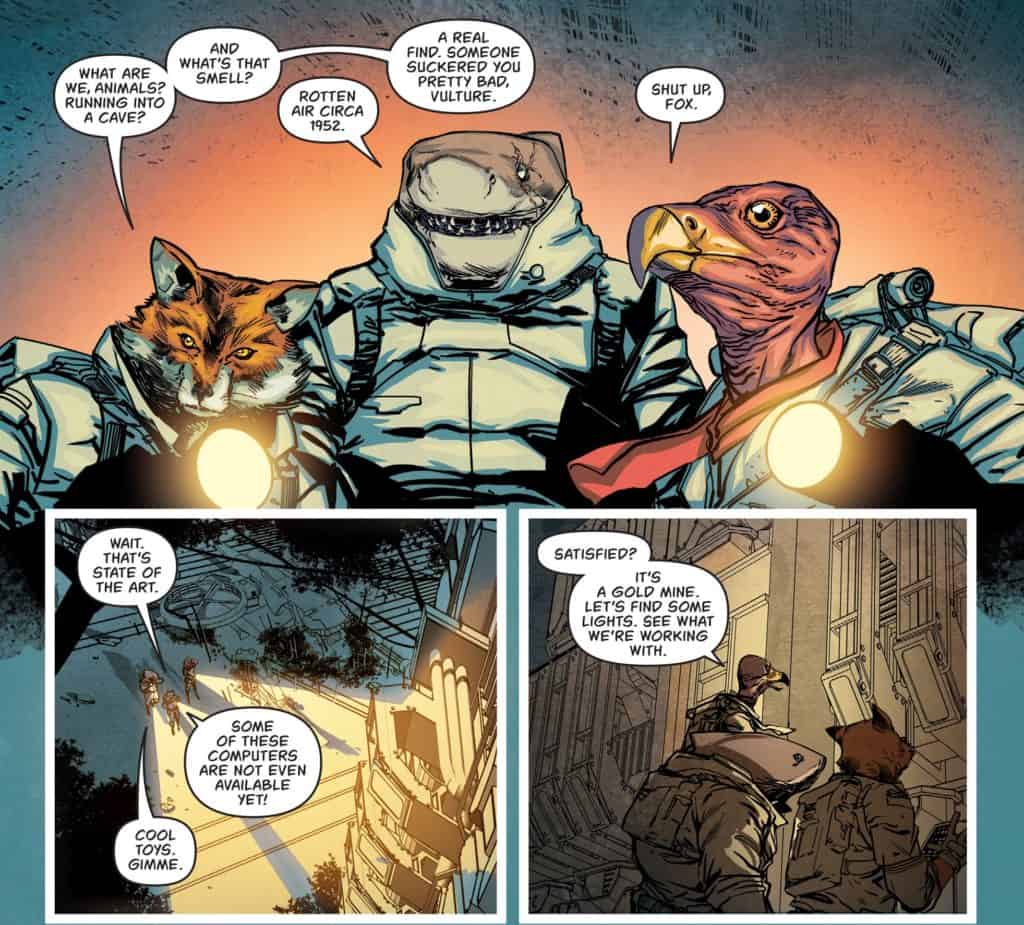 But within, they find a mysterious robot guardian with a pressing, ever-repeating question: 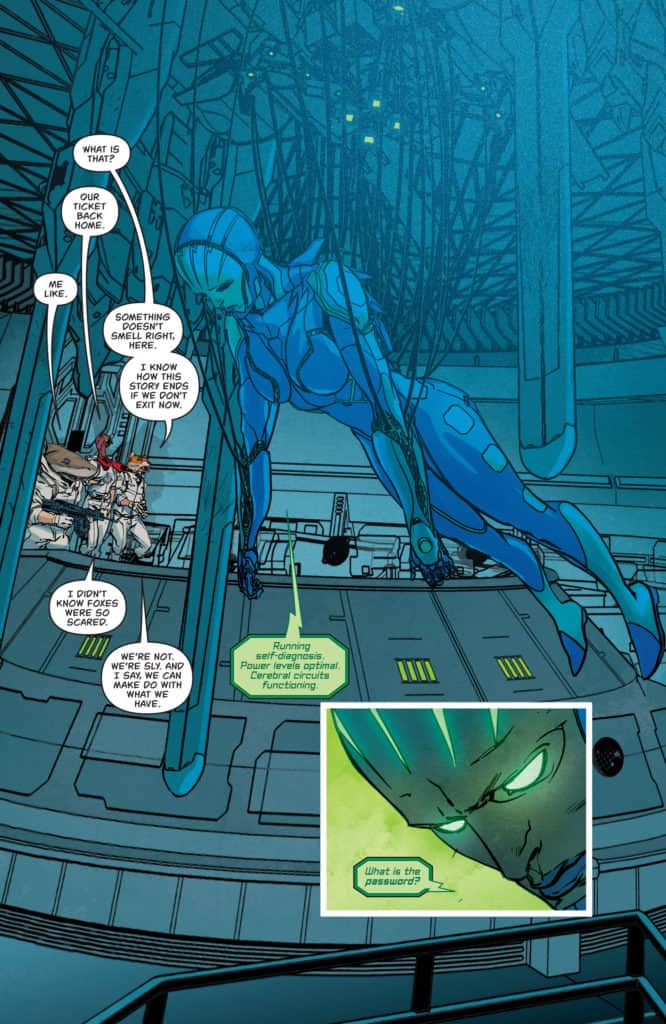 Meanwhile, high above Gotham City, Batgirl is in a far-more-challenging-than-it-should-be duel with Killer Moth! The villain has some seriously upgraded tech, and it may be more than Babs can handle! 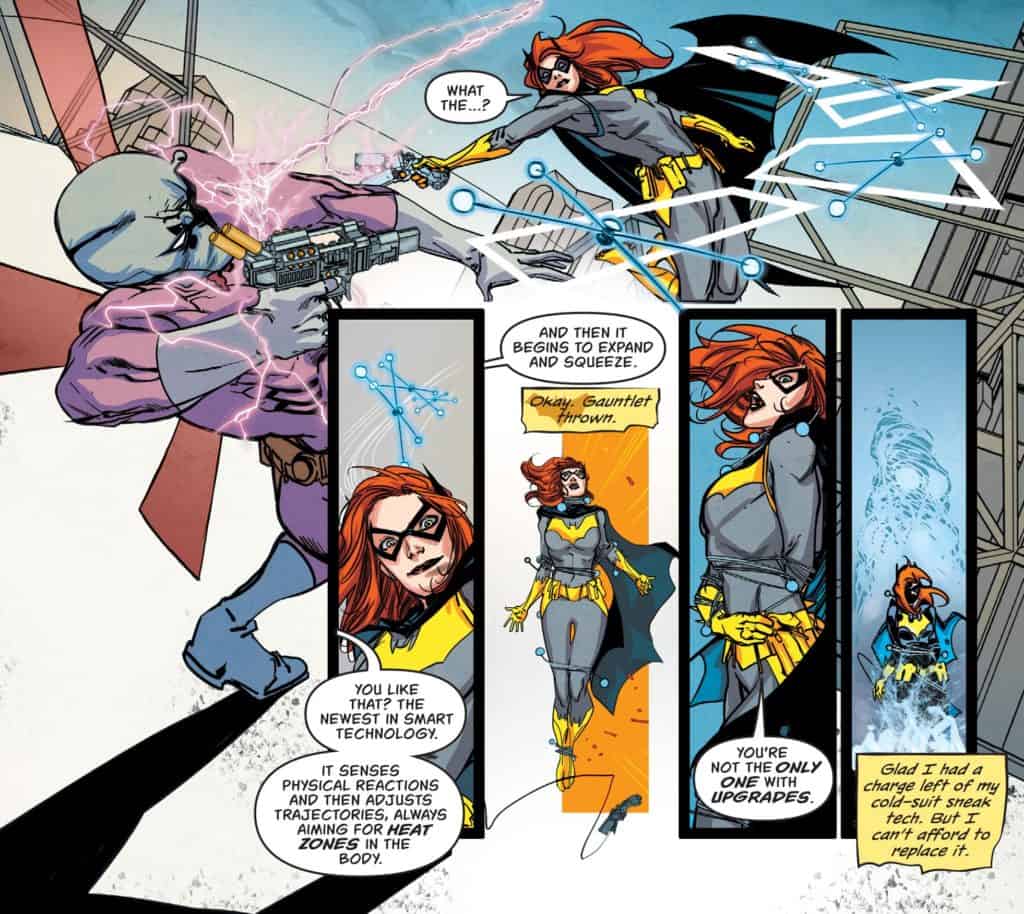 Finally, Jason Bard, stood up for a fun night out by Barbara yet again, comes to a realization that will change everything between the two of them! 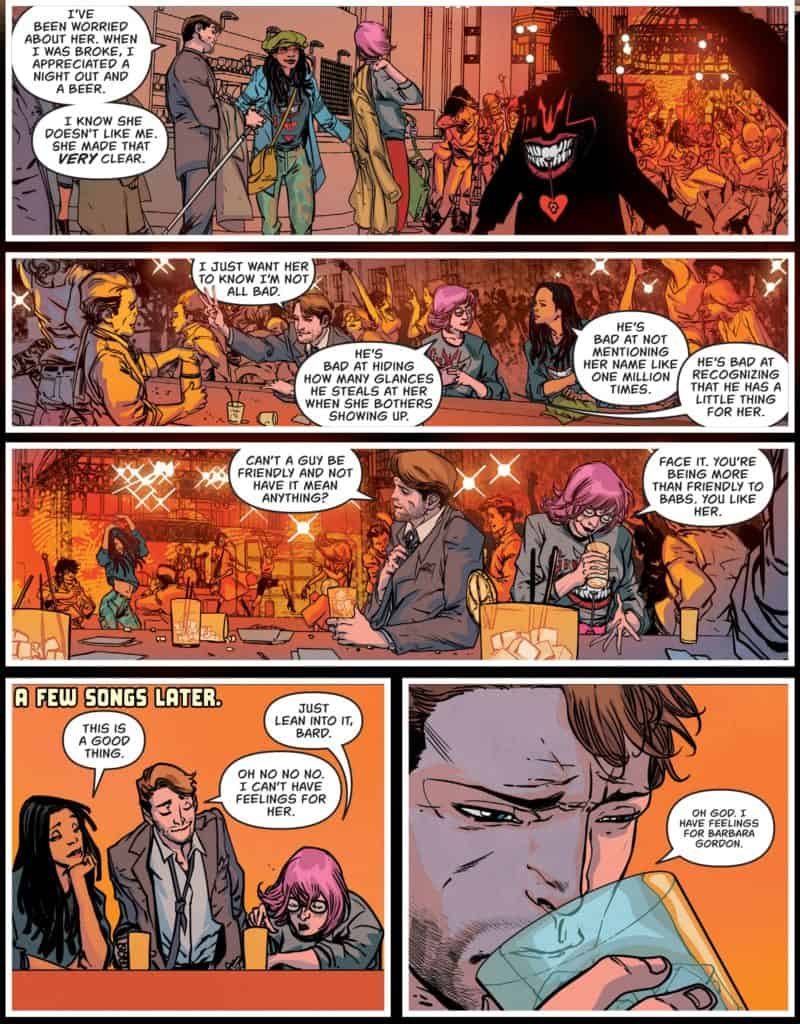 Writer Cecil Castellucci, fresh off her divisive Female Furies miniseries, takes Batgirl‘s reins this issue from outgoing writer Mairghread Scott. Apparently, though, she didn’t read last issue at all – and neither did editorial, or at least, they failed to inform her that the Terrible Trio are functionally and effectively no more as of Scott’s closing issue. ICYMI, Shark was crushed to death by a falling rooftop, and Fox betrayed Vulture and ran off into the night. No more Terrible Trio. Scene. Fin.

Yet this issue picks up as though none of that happened at all, a huge gaffe for the incoming writer to make in her first issue. It’s so egregious, at first I thought the sequence was surely a flashback – but no, editorial was just asleep at the wheel. It’s tempting to make a pointed comment about how little continuity seems to matter in modern comics, but honestly, this feels more like an editorial screw-up for which Castellucci will take the blame. This sort of thing seems to have been happening more and more lately at DC, from letterer Steve Wands not getting credited at all for two recent issues of Flash, to Jon Kent randomly aging eight years in the span of an issue and undoing everything Tomasi and Jurgens had been doing with him since Rebirth began, to Heroes in Crisis being allowed to exist at all.

And I could almost let it slide if this issue felt like it had more going for it, but instead, it’s chock full of padding. There wasn’t much for me to write about in the recap because, plain and simple, not much happens this issue. Half the issue is spent with Batgirl stuck in a prolonged fight with Killer Moth for no other reason than to have a tie-in with “Year of the Villain” (he wants to beat her so he can receive Lex Luthor’s offer), a quarter of it with a a trio of villains who shouldn’t be a trio anymore literally effective last issue, and another quarter spent with Jason Bard, who actually has the funnest sequence in the issue just by being so oblivious to his feelings for Barbara.

Perhaps most egregiously, though, is the narrative backflips the issue makes to remind us that Barbara used to be Oracle. Spoiler warning: the big robot guardian the Trio stumbles onto is, in fact, named Oracle. Castellucci wants us to believe this is a clever riff on Batgirl’s old identity, but it really just comes across like obnoxious fan service that literally serves no purpose other than to remind fans of how things used to be before Barbara magically got her ambulation back. To compound my frustration with this, the big robot is named Oracle by Luthor’s Offer Drone, making that twice this issue that “YOTV” has been shoehorned in needlessly to this issue. Either this or the Killer Moth sequence could have played out exactly the same without the Offer angle. It’s not just exasperating – it’s a total turn-off for any enjoyment that might have otherwise been gleaned from this issue.

Lastly, the art: while Carmine Di Giandomenico doesn’t do a bad job this issue (and is lifted up by Jordie Bellaire’s always-stellar colors), his pencils’ roughness has a quality about them that just doesn’t seem to match Barbara’s corner of Gotham. Maybe I’m spoiled by the sleekness of previous artist Paul Pelletier’s linework, but this is a major comedown – hampered by weirdly out-of-place CGI flourishes that look about twenty-plus years dated:

The contrast is so obvious, it brings the whole art down a notch just by being there. All of Killer Moth’s new tech toys are rendered this way. What was gained by doing this? Why not just draw it like normal? This dreck really does look like it escaped a 1996 Marvel comic… and not in a good way.

Cecil Castellucci's tenure as Batgirl scribe unfortunately doesn't get off to a good start, whether it's the blatant disregard for recent events, a padded script, a weak plot, or the lackluster art. Barbara deserves better, and I hope this is just some jitters Castellucci has to work out of her system here at the start - or this run will be doomed to fail.