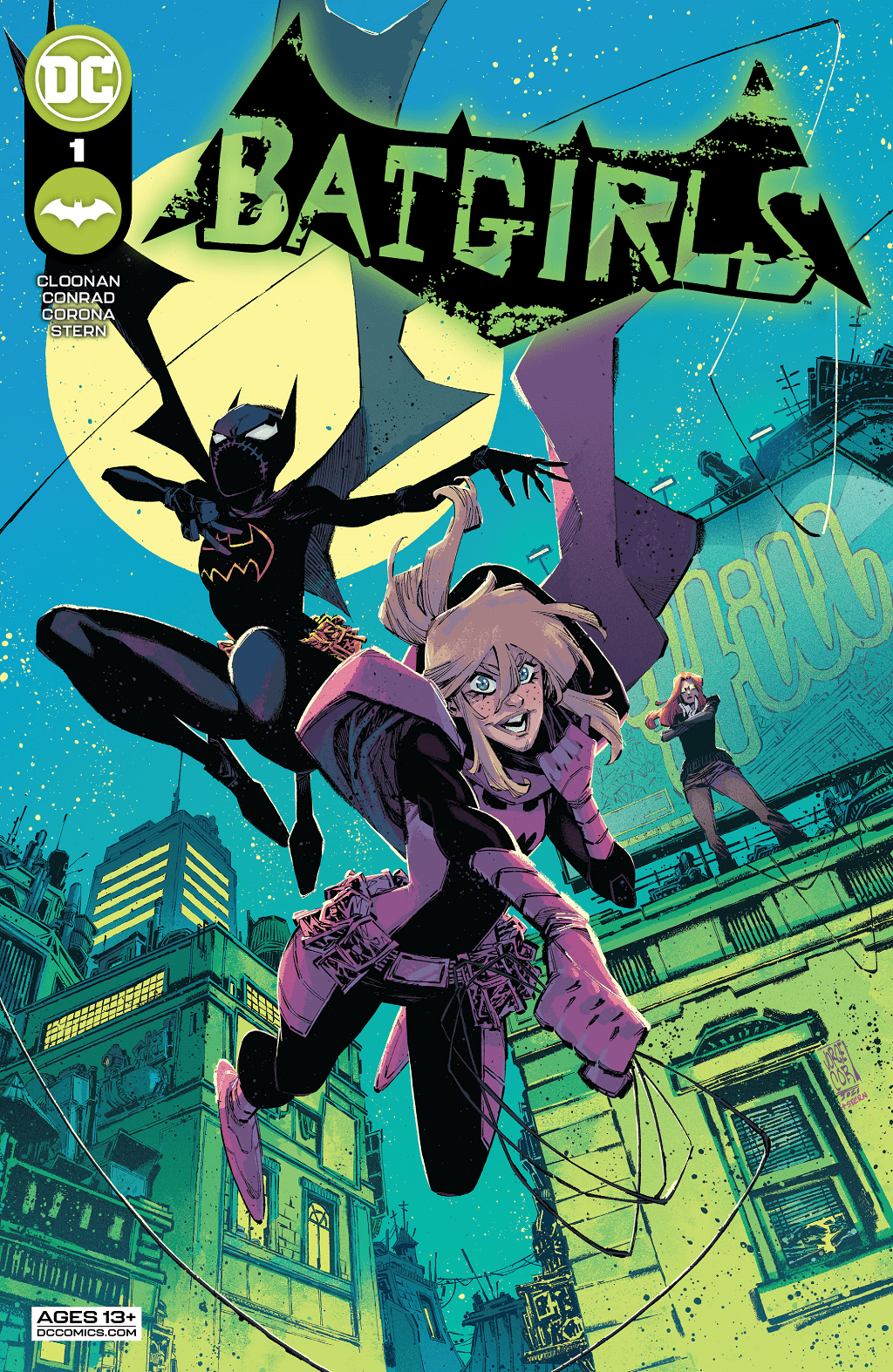 Batgirls Cassandra Cain and Stephanie Brown are only able to navigate the dark, gritty, and oftentimes scary city of Gotham by leaning on the bright light that is their best-friendship. Mentored by Oracle, the Batgirls move to the other side of town where Barbara Gordon can keep a better eye on them while the hacker Seer is still invading their lives. Steph may be too rash sometimes, and Cass doesn’t speak much—but what they lack in similarities they make up for with their mutual respect and love for each other…and what makes them stronger together as Batgirls!

Ever since Cassandra Cain and Stephanie Brown reclaimed the Batgirl title for themselves in Batman: The Joker War Zone, fans have been waiting for a Batgirls team-up book featuring Cass, Steph, and Barbara Gordon. Tantalizing Batgirls back-up stories in recent issues of Batman hinted at what was to come in the new Batgirls series, building hype and drawing in new readers who might be less familiar with the characters. Judging by Batgirls #1, it is safe to say that this new series is worth the hype. Deliciously energetic, vibrant, and whimsical, Batgirls #1 is sure to please both longtime Batgirls fans and newer readers.

This debut issue sees Babs, Steph, and Cass moving into a new flat and trying to get Oracle back online while keeping a low profile, because the Gotham Clock Tower has been destroyed and Cass and Steph have been framed as terrorists. All this was the fault of Seer, a mysterious antagonist who seems to be a sort of anti-Oracle and is ruthlessly targeting the Batgirls by hacking into their technology and using it against them. Babs implores Cass and Steph not to go looking for trouble, but of course they can’t resist investigating strange occurrences in their new neighborhood, an area of Gotham called The Hill. They are Batgirls, after all.

The tone of the writing is distinct and delightful. Michael W. Conrad and Becky Cloonan imbue the comic with a sweetness and a silliness that help make this series feel truly original. It’s very different from their work on the current Wonder Woman series, but no less enjoyable. The three Batgirls play off each other in entertaining and heartfelt ways. The writers have an excellent sense of who these characters are and what they mean to each other. The comic is grounded in character — it’s what elevates it from being a simple, fun read to something genuinely resonant and exceptional. The comic also insists on a very real danger that threatens the Batgirls and The Hill, with mentions of armed muggers and serial killers. This dark undercurrent keeps the comic from being too cutesy and makes Cass’s and Steph’s dedication to doing good and having fun seem all the more admirable.

Jorge Corona’s art is absolutely incredible, and perfectly suited to the writing. Corona’s art is dynamic, detailed, and stylish, creating a unique look for the series that is unlike anything else DC is currently publishing. His visuals are full of energy, even when depicting something so mundane as the Batgirls getting up in the morning and drinking coffee. The fight scenes are simply spectacular. Most impressive is the way Corona conveys personality through his art. In costume, Cass is drawn with severe, jagged edges while Steph is drawn with more rounded edges. Cass’s posture is often aggressive and even gargoyle-esque, making her look sinister and threatening. Steph’s more flowy, graceful poses provide a sharp contrast, demonstrating the girls’ different personalities in a visually pleasing manner.

Sarah Stern’s colors are essential to making this comic work. Her colors are bold, adding to the fun and exciting tone of the comic. Bright pinks, blues, and greens inject vibrancy and depth into Corona’s art. The garish colors associated with Seer enhance the sense of dread and menace which accompany this villain. Becca Carey’s letters are impressive and often delightful. Her sound effects make the setting even more immersive, and at times even contribute visual humor. Carey displays an impressive range of fonts and word balloons, and her lettering placement helps the dialogue read exactly as it’s meant to. Truly, this is a creative team firing on all cylinders.

Batgirls #1 superbly kicks off a long-anticipated series with a creative team that is doing outstanding work on all levels. Whether you’re a longtime devotee of the Batgirls or simply intrigued by the hype, this comic is a must-read.