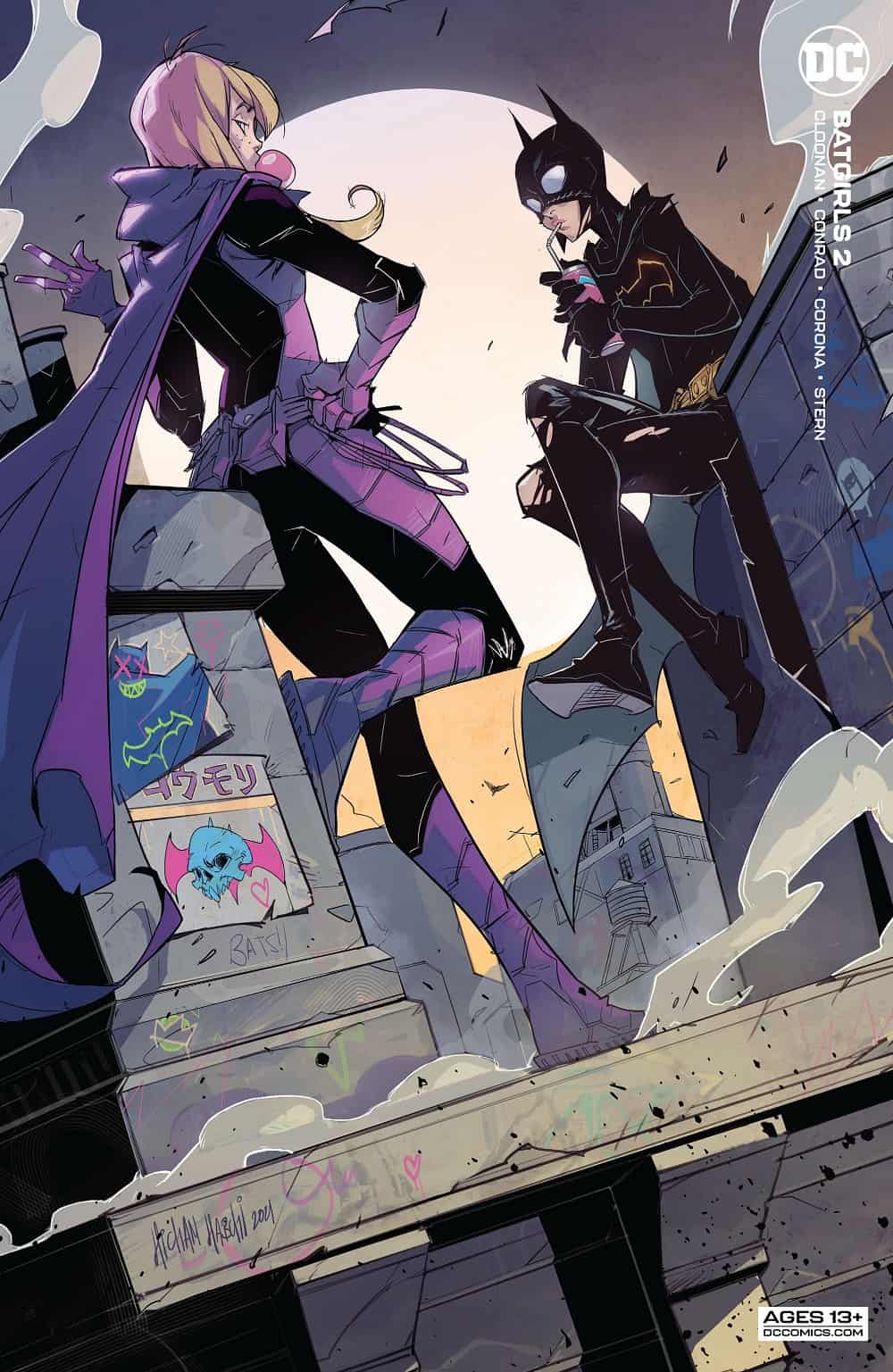 Bondo! Bondo! Bondo! With their new secret muscle car and their new secret patrol route, Batgirls Cassandra Cain and Stephanie Brown find moving to their new neighborhood—thanks to Oracle instructing them to “lay low”—that much easier to bear because they have each other. Steph begins witnessing some strange actions through the window of the building across the street and can’t help but investigate if the recent murders are connected to them! Meanwhile, Oracle realizes the most effective way for the girls to wear her newly upgraded comms is by piercing their ears, and Cass freaks out!

The first issue of this new series was full of energy and excitement. This issue is a little more low-key than the previous one, as it provides more information on the antagonists of this arc and continues establishing the new dynamic of the three Batgirls living together in the Hill. Still, there’s a lot of fun contained in these pages, and the art and colors are never lacking in energy.

Batgirls #2 fleshes out the setting of the Hill, showing us sides of the neighborhood we haven’t seen before. It’s a visually compelling setting as rendered by Corona and Stern, and Cloonan and Conrad give it a mystery and depth that make it intriguing. It’s great seeing the Batgirls operating in a location that is so different from what they (and we) are used to. We get to learn more about this strange, beautiful neighborhood right along with them. Bondo the muscle car feels almost like an ambassador or tour guide of sorts, gradually revealing the secrets of the Hill to Cass and Steph, and to us.

This issue further develops previously introduced plot threads at a slow pace which promises to be satisfying. We learn more about the Saints, the villains introduced at the end of the previous issue who fight Cass and Steph in the beginning of this one. They’re genuinely menacing opponents, even to the highly capable Batgirls. Also frightening is the serial killer on the loose, whom the Batgirls know little about but who weighs heavy on their minds. Though the tone of this series feels relatively upbeat, this looming danger gives it a welcome edge.

The Batgirls and their relationships to each other are a huge draw for readers, and this issue reinforces the emotional connections within the team. We get to see more of the dynamics between the Batgirls both in and out of costume. The ear-piercing scene teased in the solicit for this issue wonderfully demonstrates how much Cass, Steph, and Babs all trust and respect each other. Despite this trust, certain Batgirls seem to be keeping secrets from the others, and it will be interesting to see what kinds of repercussions this might have on the team in the future.

Batgirls #2 fleshes out the setting of the Hill and builds on previously introduced plot threads while reinforcing the emotional connection between the three Batgirls. With this second issue, this series seems to be developing an intricate and compelling story with the Batgirls’ friendship at its core.