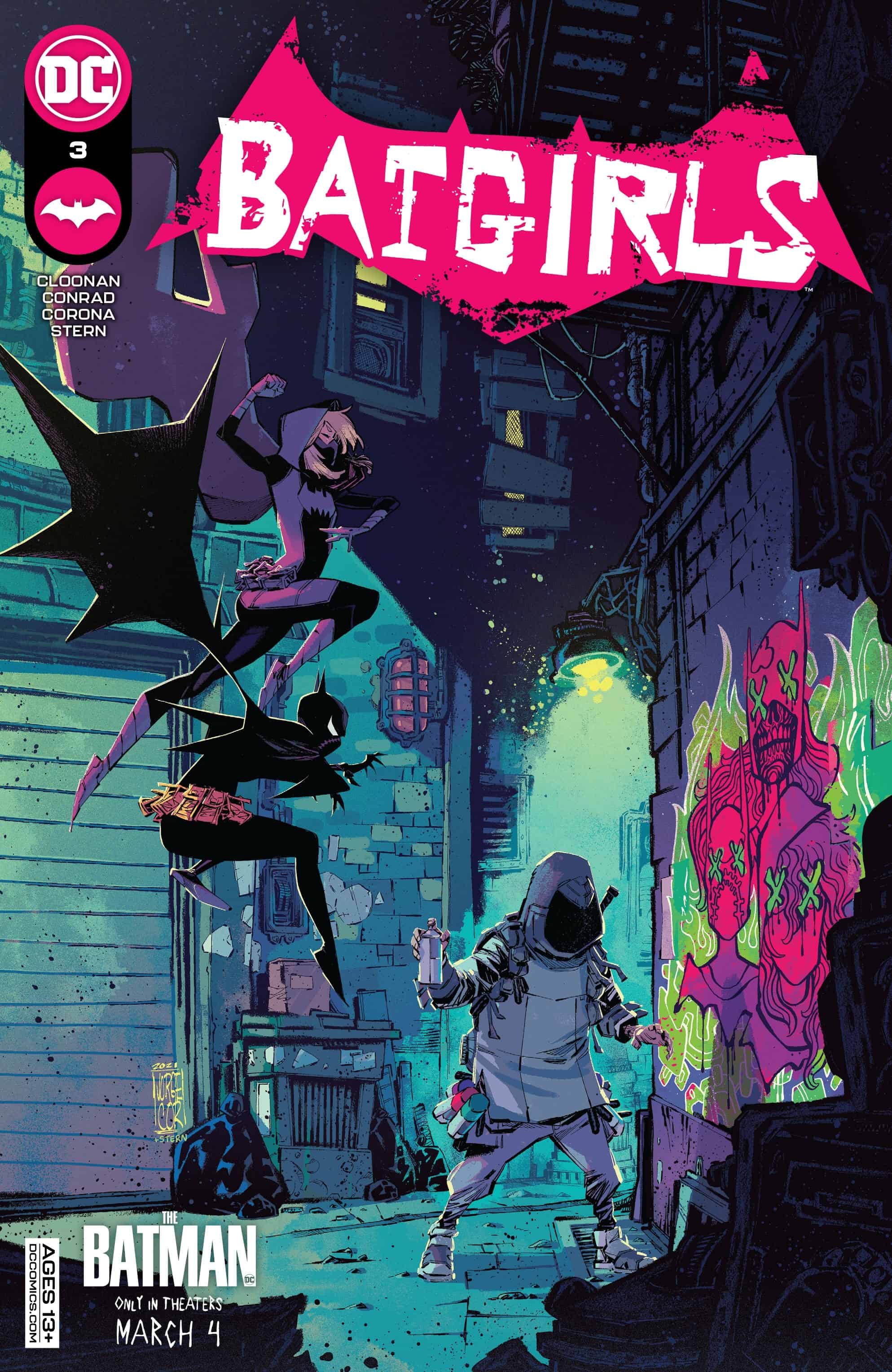 The Batgirls discover that new street artist Tutor is hypnotizing innocent residents of Gotham and forcing them to do his bidding. Tutor's underground art show at the shipyard is the perfect opportunity for Barbara to go undercover and discover what this strange artist is truly up to.

Batgirls #3 provides a closer look at new villain Tutor while placing the Batgirls in increasingly dire circumstances and showing how they rely on each other as teammates and friends. Tutor’s mind-control gas complicates the fight, dividing Cass’s attention and bringing some of Steph’s insecurities to light. Though the Batgirls become even more embroiled in the dangers facing the Hill, they remain more determined than ever to protect the neighborhood – no matter how daunting the task may seem.

Tutor was introduced in Batgirls #1 as a brilliant but mysterious graffiti artist, but it’s only in this issue that we start to get an idea of his motives and capabilities. Tutor uses a modified fear gas to hypnotize others into obeying him. He rants on social media livestreams about the ineffectiveness of government and vigilantes alike, and he seems to know quite a lot about the Batgirls. Tutor’s mind-control abilities are primarily what make him a fearsome opponent, as he is able to incapacitate Steph through hypnosis, leaving Cass to defend both herself and Steph from his attacks. He appears to have some insight into Steph’s and Cass’s insecurities, as he taunts Steph for being inferior and calls Cass a killer. Tutor may not be as deadly as the Saints or as focused on taking down the Batgirls as Seer, but his ability to manipulate crowds of people and his knowledge of the Batgirls make him a challenging enemy nonetheless.

The reveal of Tutor as a villain and the display of his capabilities emphasize just how much danger the Batgirls are putting themselves in. The existence of his mind-control gas heightens the Batgirls’ feelings of fear and paranoia – if Tutor can hypnotize Steph so easily, then even her own mind isn’t safe. And when Steph gets hypnotized in the field, Cass is without her teammate and best friend and is responsible for both their safeties, even when the gas influences Steph to attack Cass. Seer invades Barbara’s privacy to achieve a similar effect of terror and helplessness in Barbara. Between Tutor, Seer, the Saints, and the serial killer known as the Hill Ripper, the Batgirls have an awful lot of adversaries to worry about.

Batgirls #3 shows how in the midst of all this danger, the Batgirls make sure to support each other, both as heroes and as friends. When the mind-control gas incapacitates Steph, Cass gets the both of them safely out of a perilous situation. Though Steph and Cass are quicker to leap into danger than Barbara would like, they follow her orders when it really matters. Moments of levity such as Steph teasing Barbara about a college ex-boyfriend demonstrate the strength of the friendship between the three Batgirls. With how dangerous things are getting in the Hill, it’s more important than ever that the Batgirls be able to rely on each other.

This issue highlights Steph’s vulnerabilities and insecurities in particular. Getting mind-controlled by Tutor multiple times hasn’t been great for her self-esteem, especially since Cass is much more successful at resisting the mind-control. Tutor himself pointing out Steph’s insecurities over feeling inferior doesn’t help either. Even something as small as Barbara deeming that Cass makes better coffee than Steph is enough to make Steph feel frustrated. It’s still a mystery to the Batgirls why Steph is more susceptible to mind-control than Cass (could it have something to do with the flyers of Tutor’s art that Steph has taped by her bed?), but the weakness gnaws at Steph.

So there’s something very refreshing about the way Steph voices her insecurities to her teammates. In another series, she might keep her frustration to herself, but as this series has shown, the Batgirls have enough trust and respect in each other that they’re able to communicate their issues quite easily. Cass and Barbara are quick to reassure Steph of her strength, but Steph doesn’t seem totally convinced. There seems to be some potential for interpersonal conflict rooted in Steph’s feelings of inferiority, especially given that Batgirls #2 showed that Steph was hiding something on her phone from the others. As nice as it has been to see the Batgirls all getting along for the past three issues, I can’t say I would mind seeing some conflict between teammates. It would certainly heighten the stakes even more if the team wasn’t in total harmony while going up against their many formidable villains.

The situation in the Hill seems to be becoming more and more dangerous, as Tutor manipulates others by using his mind-control gas. In the midst of all this peril, it is more important than ever that the Batgirls support each other, but Steph’s insecurities over being susceptible to mind-control may throw a wrench in the team dynamics going forward.