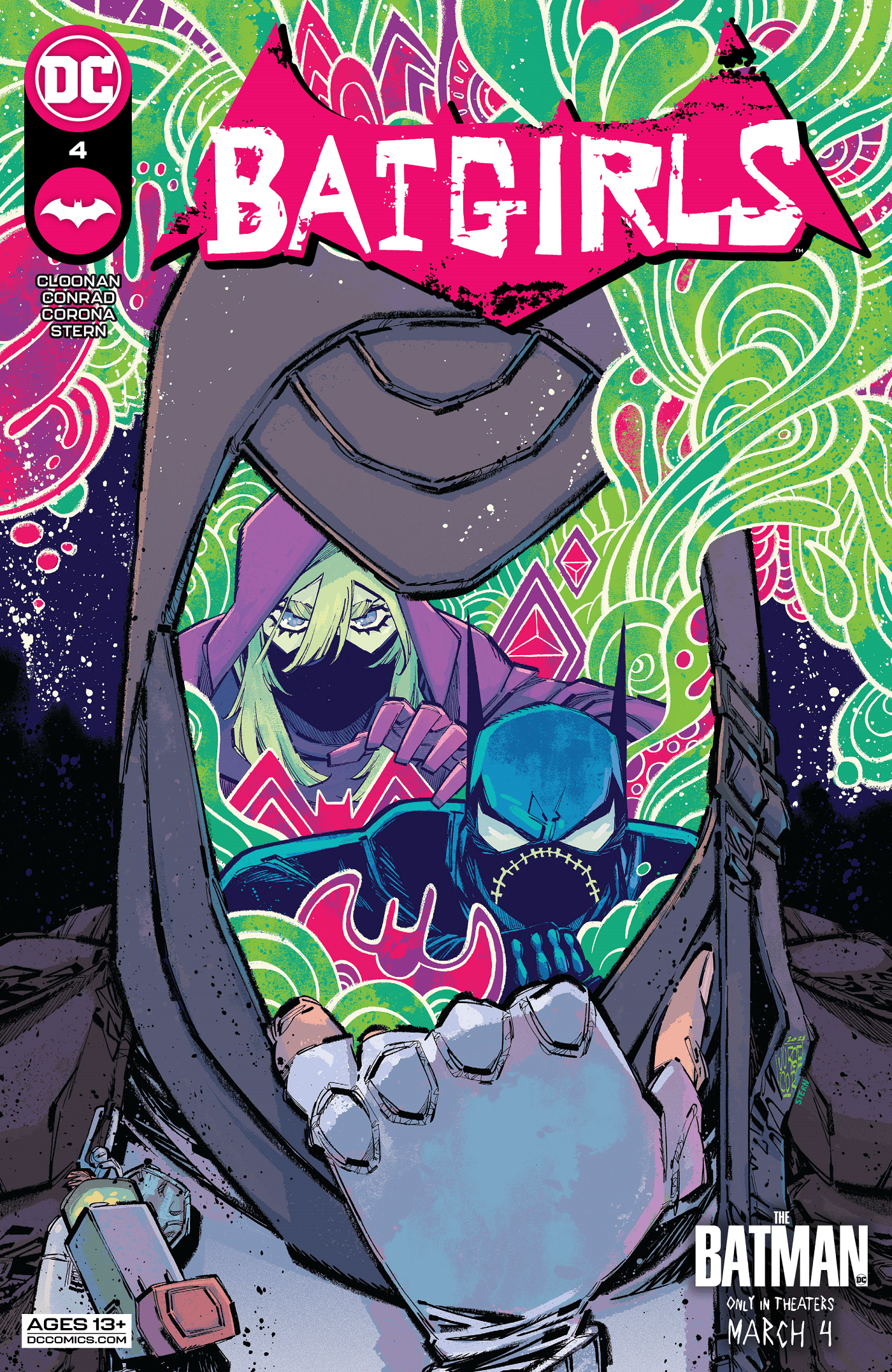 The Batgirls have enough evidence to expose Tutor for his crimes: his underground art gallery of stolen goods. But will Steph be pulled into a hypnotic trance again like last time? Meanwhile, get ready for magical bookstores, a kick-butt fight scene, and to top it all off, Babs gets asked on…a date…with an ex? Also: first appearance of new villain SPELLBINDER!

Batgirls #4 is all about bonds. It’s about how the Batgirls relate to the community of people they protect, and how the Batgirls support each other in and out of costume. These bonds of friendship and community are deceptively powerful. They’re what keep the Batgirls going even when the villains of the Hill threaten to overwhelm them.

Batgirls #4 is the first issue since #1 that doesn’t open with Steph and Cass already in costume. It isn’t until a glorious splash on page 8 that we see the pair suited up and in action. But before that point, we get to see what it is Steph and Cass do when they aren’t busy being Batgirls. Barbara gives them the day off as she devises a plan to take down Tutor, her drive to stop evildoers fueled by Seer’s cruel invasion of her privacy last issue. What Steph and Cass do, it turns out, is cruise around in Bondo the muscle car and visit a local bookstore, which happens to be owned by their neighbor Mr. Dhaliwal. It’s nice to see the two of them doing normal teenager things, and it’s sweet that they choose to spend their free time together despite already spending practically all of their time together as roommates and teammates.

The bookstore is cozy and welcoming, as all the best bookstores are. The color palette is a bit reminiscent of Shadow of the Batgirl, a graphic novel in which a young Cass finds refuge in a library. Dhaliwal is especially kind, giving Cass a book for free with the condition that she return and tell him whether she liked it. Given the overwhelming amount of crime in the Hill and the grimy, weathered look of the neighborhood as depicted by Corona and Stern, it’s a welcome change to see a spot in the neighborhood full of warmth and hospitality. Dhaliwal To Wall Books seems like a place that the Hill’s residents can visit to find community, and this makes the Batgirls’ new neighborhood feel that much more fleshed out.

This scene in the bookstore emphasizes the growing bond between Cass and Dhaliwal, a bond reinforced last issue when Cass anonymously returned Dhaliwal’s stolen slow cooker to him. Dhaliwal hints at knowing Cass’s identity as Batgirl but doesn’t pry. Regardless of whether or not he knows, this connection between Cass and her neighbor helps Cass see firsthand the effect that her vigilante activities as Batgirl has on civilians. Cass was alone for much of her life, but this work truly connects her to the people of her community. Living in the Hill, she can see directly how her heroism has improved the lives of others.

Once night falls, Cass and Steph track down Tutor at his hideout, unaware that they themselves are being tracked by the Saints. The bonds of friendship are no less important for the Batgirls in the field than they were for them off-duty—rather, they’re arguably more important in such a potentially dangerous situation. Tutor’s fear gas once again hypnotizes Steph and turns her against Cass, and this time Cass isn’t able to snap Steph out of it by simply removing her from the vicinity. Cass dodges Steph’s blows and refuses to land one of her own, instead imploring her to wake up and remember their friendship. It’s by reminding her of the close bond they share that Steph manages to shake off the mind-control, and from there they defeat Tutor easily.

Batgirls #4 spends quite a lot of time ruminating on Cass and Steph’s friendship and what it means to each of them. Cass needs Steph to explain to her words such as “poker face” and “bestie,” the latter of which Steph uses to describe their relationship. Steph is patient with Cass and doesn’t think any less of her for not knowing these words. Steph needs Cass just as much, as shown by her inability to break through the mind-control without Cass’s help. It’s Cass’s embrace that grounds Steph and allows her to regain control of her own mind. As Steph intimates to Cass, the two of them had uniquely dangerous and lonely childhoods, and they’re lucky to have found each other. This powerful friendship is one of Batgirls’s great strengths, and this issue serves as a reminder of how important it is to both Cass and Steph.

Per Barbara’s orders, Cass and Steph take Tutor to the doorstep of Charles Dante, the art therapist who previously worked at Arkham and is Barbara’s sort-of ex. Ever since Dante was introduced, it was clear that there was something fishy about him, and the final page of this issue reveals him to be the villain Spellbinder. One might worry that Batgirls is becoming too crowded with villains—it has Seer, the Saints, Tutor, the Hill Ripper, and now Spellbinder. It helps that the Saints are working under Seer’s orders while Tutor seems aligned with Spellbinder, forming two teams with the Hill Ripper as a mysterious wild card for now. And it helps that, like everything else in this series, these villains are all just so darned fun. The Batgirls may be facing a lot of enemies, but if they support and rely on each other, there’s nothing they can’t do.

Batgirls #4 gives Cass and Steph some downtime within their community, which helps remind them why they became Batgirls in the first place. The issue also sees the Batgirls defeat one villain while playing right into the hands of another. This series continues to emphasize the importance of the Batgirls’ friendships with one another, as showcased in the climactic fight with Tutor in this issue. The bonds of friendship may be strengthened, but the Batgirls continue to get in over their heads facing the many, many villains of the Hill.