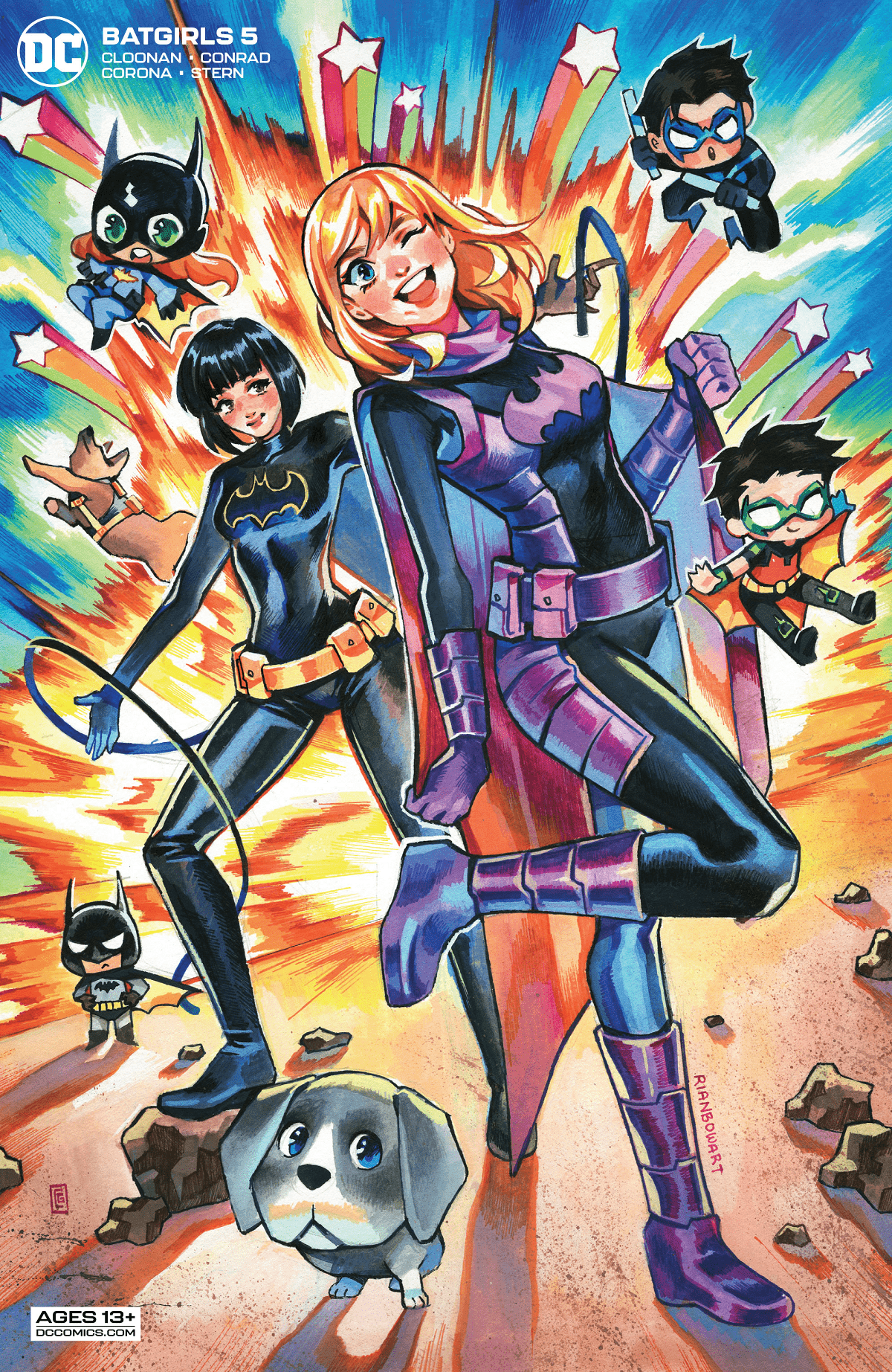 The Batgirls and Tutor face off again, but this time at the creepy, abandoned Arkham Asylum! Can the Batgirls stop Tutor from using his art to put all of Gotham in a mind-controlled trance? Let’s hope the Batgirls found a way to avoid being put under his control…again! Meanwhile, Babs’s hands are tied - literally - when she comes face to face with Spellbinder.

Batgirls #5 ultimately consists of a lot of set-up, mostly for this first story arc’s finale next issue but also for later issues of the series. Yet the issue is far from boring, opening with a thrilling car chase and featuring such gems as a robot dog reprogrammed to help the Batgirls and an abandoned Arkham Asylum. This issue adequately sets the stage for the big villain showdowns next issue while maintaining the sense of fun which the series has become known for.

The issue opens with Steph and Cass driving Bondo the muscle car and being chased by the Saints. Babs joins her teammates in the field in her Batgirl costume for the first time in this series, catching up to them on her motorcycle and helping them evade and defeat their pursuers. The Batgirls inform the Saints of Seer’s manipulation and leave them incapacitated, reprogramming and stealing their robot dog Fido in the process. Corona’s art is gorgeous throughout the issue, but it’s especially captivating in this car chase scene, where the exaggerated motion of the automobiles imbues the page with energy.

This scene provides a stark contrast to a moment earlier in the series when Cass and Steph were ambushed by the Saints and found themselves way out of their depth. The fight goes much better for them this time around. Part of the reason for this is that they’ve faced the Saints before and know what to expect from them, and it also helps that they have Babs in the field as Batgirl assisting them. But a major factor in their success is that the Batgirls have become accustomed to fighting together as a team, and they’re able to rely on and look out for each other. Each one of the Batgirls is a formidable fighter in her own right, but over the course of just a few issues of this series the Batgirls figured out how to work together as a team, and they’re stronger for it.

After defeating the Saints, the Batgirls split up: Cass and Steph investigate a deserted Arkham Asylum, where Tutor is hiding, and Babs stops by the house of her old friend Charles Dante in her civilian attire to check on him. By the time she realizes Dante is not a victim but a villain, specifically the mysterious villain Spellbinder, it’s too late and she gets knocked unconscious. Meanwhile, Cass ventures to the roof and discovers a mob of mind-controlled Gotham residents intent on killing her, and Steph faces off against Tutor in the asylum. By the end of this issue, the Batgirls are all separated from each other and seemingly in over their heads with their various foes.

This opening car chase scene of Batgirls #5 seems to make a point of demonstrating how powerful the Batgirls are when they work together, and the end of the issue changes things up by isolating the three from one another so they have to face their respective enemies alone. It’s an effective way of building tension and raising the stakes, and promises an exciting and climactic end to this story arc next issue. Each of the Batgirls’ villains feels handpicked to challenge that character specifically: Babs has to contend with her former friend without giving away her identity as Oracle/Batgirl, Steph has to defeat Tutor without succumbing to his fear gas like she did in previous issues, and Cass has to disable a mob of innocent people who have been mind-controlled into a murderous rage. This attention to each character’s specific strengths and vulnerabilities is truly what makes Batgirls such an outstanding series. The exciting action scenes and whimsical narration are lovely, but they wouldn’t feel satisfying if the comic was not so grounded in the characters of Cass, Steph, and Babs. Though Batgirls #5 feels like an in-between issue whose purpose is to set everything in place for Batgirls #6, the issue is nevertheless entertaining and eye-opening.

Batgirls #5 shows the Batgirls first working together as a team and then splitting up and preparing to face enemies by themselves. This issue is as dynamic and fun as all the ones preceding it, and it seems like the finale to this first story arc next issue will be thrilling.