Batgirls #6: Then and Now 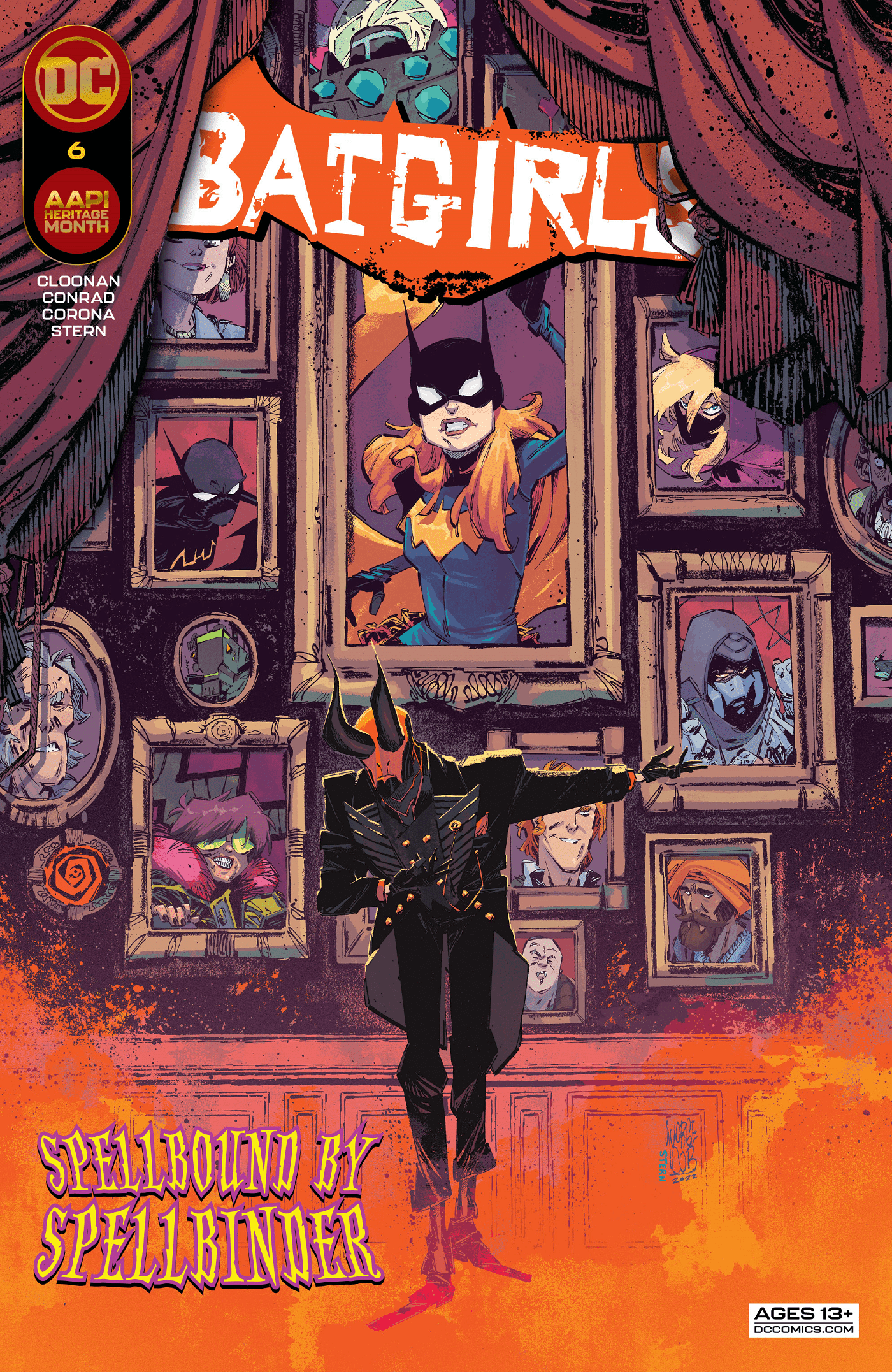 With Babs kidnapped and tied down by Spellbinder, the Batgirls have to navigate through Tutor's operations without an Oracle. Can Babs escape Spellbinder's hypnosis before he's done painting her to add to his collection of other drawings of beautiful young women?

Batgirls #6 proves its dedication to character as it shows us how each of the Batgirls face their respective challenges. The ways in which Cass, Steph, and Babs respond to the situations they’re in are deeply informed by their respective histories. Yet it isn’t necessary to have an exhaustive understanding of each Batgirl’s backstory in order to appreciate their victories in this issue. Batgirls remains both entertaining for new fans and rewarding for old fans as it brings its first story arc to an end.

The issue opens with each of the Batgirls alone in a precarious situation, just as they were at the end of the previous issue. Babs is tied to a chair in Spellbinder’s home while Spellbinder monologues about his villainous plan to manipulate the people of Gotham through his paintings, which work in tandem with Tutor’s fear gas to control minds. As Steph battles Tutor inside the empty Arkham Asylum, Cass is tasked with keeping the mind-controlled mob hunting her from hurting either her or themselves. Though all three Batgirls seem like they might be in over their heads, they each manage to save themselves through their own distinctive strengths.

In previous issues of Batgirls, Steph displayed some insecurities over how she measures up to Cass. She’s very aware that Cass is a better fighter than her, and her own susceptibility to Tutor’s fear gas heightened her feelings of inferiority. But in this showdown against Tutor, Steph shows her courage and her confidence in herself. She proclaims to Tutor that she is aware of her imperfections, but she accepts them and likes herself for who she is. When Cass crashes the fight (literally, through a window), Steph is relieved rather than resentful. It’s a subtle character arc for Steph, but one that pays off, and feels grounded in her past characterization.

Cass may be a legendary fighter, but even she can be overwhelmed by too many people. She is unable to quell the mob by herself, and has to get Steph’s help to tie them up after helping Steph take down Tutor. She also saves mind-controlled reporter Grace O’Halloran from plummeting to her death, and prevents Tutor from suicide bombing the Asylum full of his mind-controlled mob, tossing the bomb to Steph so she can drive it into the ocean via Bondo. A definitive part of Cass’s character is her determination not to let anyone die on her watch, and in this issue she is instrumental in preventing several deaths. Her rescue of O’Halloran emphasizes a theme that has been important with regards to Cass’s character throughout this series: the power of community. Even though O’Halloran has been proclaiming the Batgirls a danger to Gotham, it’s Cass’s duty to save her just the same. Getting rescued by Cass shows O’Halloran just how wrong she was about the Batgirls, and the next morning, the Batgirls turn on the TV to discover that O’Halloran is now publicly championing them. Both Cass’s more recent character developments and her longstanding values come into play in this issue, giving us a Cass who feels both recognizable and dynamic.

Babs’ solo defeat of Spellbinder may be the most powerful moment in this issue. Though tied to a chair, she manages to loosen her arms and attack Spellbinder with a batarang and her fists. When Spellbinder mocks her for trying to fight while tied to a chair, Babs declares that she is perfectly capable of defending herself from this position. This is a clear reference to her past paralysis, and how she trained in upper body combat after she lost the use of her legs. Though Babs can walk now, the series depicts her as a disabled person whose disability continues to act up at times. Some days she needs the assistance of a cane, and others she can’t walk at all. Yet she is never powerless, as this issue makes a point of demonstrating. Though the nature of her disability has changed over time, the skills she learned when she was first paralyzed still serve her well today. Spellbinder tries to stop her by using fear gas, but Babs easily overcomes it and takes him down. Babs is intimately familiar with pain and fear, and, as she tells Spellbinder’s lifeless body, she thrives on overcoming it. The trials she faced in her past made her the person she is today, and that person is someone who can defeat a supervillain even after being tied to a chair and dosed with fear gas.

This eventful night for the Batgirls reminds them (and us) of the challenges and traumas in their pasts that shaped their identities, but also of the ways that they have grown into stronger and more capable heroes as a result. The following morning, they relax on the couch together and acknowledge how important it is for them as people who have been through a lot to have each other’s friendship and support. In a way, this feels like the thesis of Batgirls: you persist in the face of challenges and hardships by sticking close to the people who love you. Batgirls #6 offers an exciting conclusion to its exuberant first arc while retaining the focus on character that makes this series truly excellent.

Batgirls #6 sees the Batgirls defeat villains Tutor and Spellbinder, confronting their own pasts in the process. The past histories of the Batgirls are referenced, but not in a way that would alienate new readers unfamiliar with the characters. This issue elegantly ends its first arc and begins to set up its next arc.

Batgirls #6: Then and Now