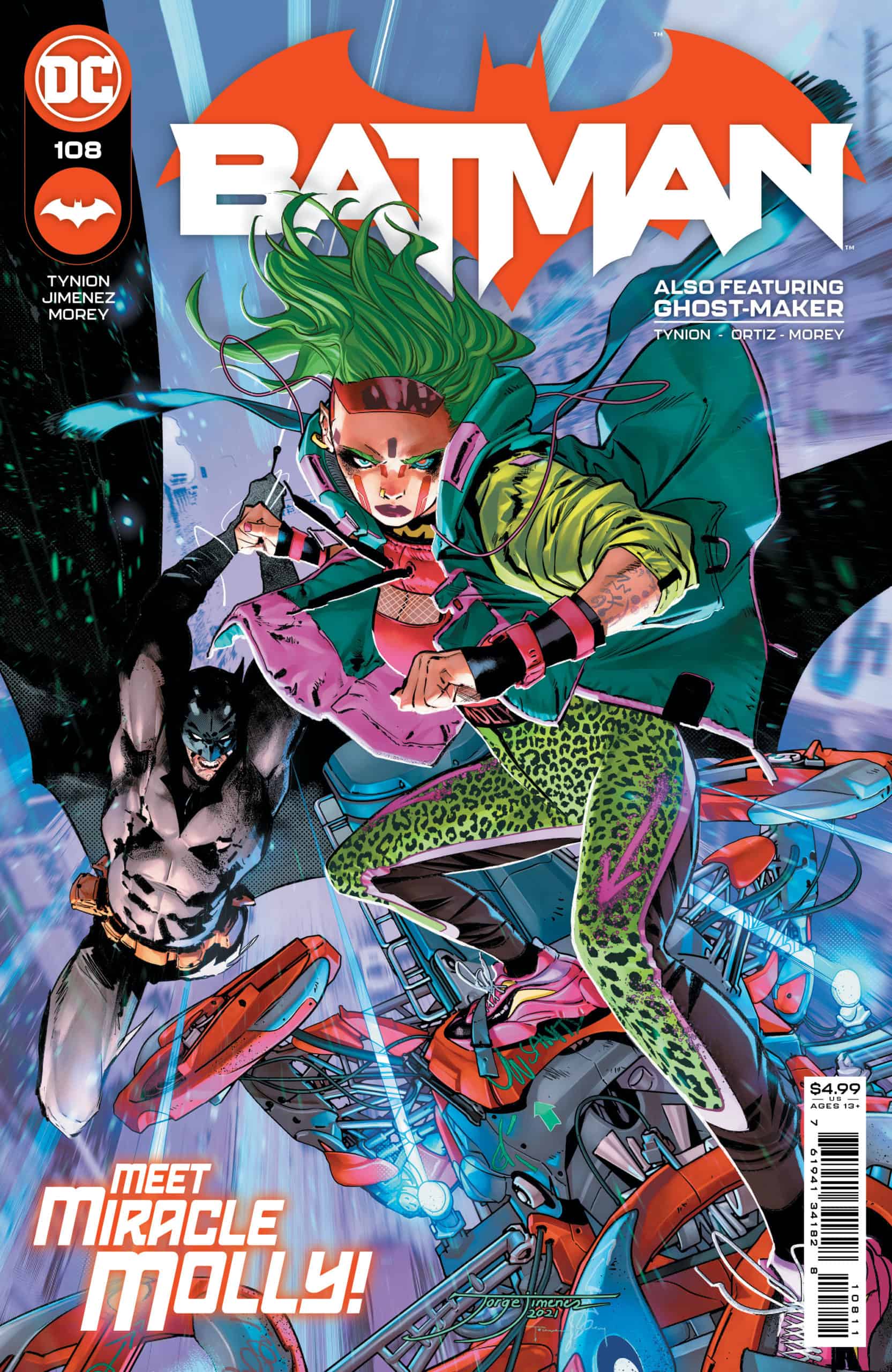 Bruce’s investigation into the Unsanity Collective begins in the company of Miracle Molly, who is charged with showing him around. Will he be able to uncover the connection between the Collective and the Scarecrow’s fear campaign? Meanwhile, while Mayor Nakano honors Sean Mahoney for his heroism on A-Day. Simon Saint begins to plan the advance of the Magistrate program – a plan that may involve Mahoney as a key player!

And, in the Ghost-Maker backup, get to know one of Ghost-Maker’s major enemies – Kid Kawaii, the deadly robot assassin with the cute face!

During the Gotham section of Future State, one of the things that I repeatedly tried to figure out was… who is Peacekeeper 01? It seemed to me that the way his face tended to be hidden implied that it was a familiar one, and when we saw parts of him – the back of his head, his red hair – I would think… well, who’s a redhead? What am I looking for?

As it turns out he was a new character, and you know what? I wasn’t expecting that at first, but maybe I should have been. If James Tynion IV has made anything known since his arrival on the main Batman title a little over a year ago it’s that you can expect new from him – new mythology, new characters, new factions, even new locations within Gotham City.

Take Batman #108, part three of “The Cowardly Lot” for example. This issue is, aside from the framing device of the Scarecrow and Bruce that we’ve come to know and love, largely split into two rotating narratives, both involving the tapestry of new characters and mythology that Tynion is building.

First, there is a deeper look at new Gotham Faction, The Unsanity Collective, including an examination of their belief system and their lifestyle. Our companion on this tour is, of course, Bruce himself – undercover as Matches, pretending to want to join the Collective in an attempt to figure out how they fit into the current fear campaign the Scarecrow is waging on Gotham. The pretense isn’t as successful as he’d like, but is saved by breakout character Miracle Molly, who chooses to “sponsor” him. This gives us a chance to spend some time with her and come to know her (rather cool) role in the Collective, while learning more about how the Collective operates.

This whole section is beautifully presented – Jorge Jimenez and Tomeu Morey are a powerhouse team under any circumstances, but given the opportunity to work with rich, neon colors and quirky futuristic character designs they’re really in their element. Miracle Molly’s design is odd and interesting to me – her clothes aren’t especially attractive but they’re attention getting, and the fact that they are so “loud” and not designed for beauty is itself a strong character statement. Her face almost looks like a mask or a doll’s; it evokes the feeling of uncanny valley.

Then there’s the environments – there’s a splash that is just beautiful, but they have the nerve to outdo themselves right after that with a truly breathtaking double page spread of Gotham as it exists today – bright lights and half-complete skyscrapers outlined in blue and pink.

Next you have the B plot, which follows the continued development of the Magistrate program, starting with new mayor Nakano honoring future totalitarian cyborg supercop Sean Mahoney for his genuinely heroic work on A-Day. And this is where I wrap back around to that first thought about Peacekeeper 01’s identity.

Because think about it – if Tynion had used a familiar face for Peacemaker 01, it would just be another twist we already know in advance will eventually be pushed to the wayside – a temporary stop in the career of… whoever. And not only that, but we would also already know about him, what motivates him and where his story will inevitably lead.

By using Sean Mahoney, a character we met for the first time just two months ago, Tynion circumvents all that. We see him in his original form – just an Arkham guard with good intentions, trying to save all the lives he could during an incredibly deadly attack on the Asylum, seemingly sacrificing his life to do so in the process. We see him honored as a hero, but we also see how the experience has changed him, how he turns against the heroes the city leans on. Growing bitter, being recruited.  We see him become the man we knew from Future State titles. And that’s just way more engaging than asking ourselves how, I don’t know, the Riddler becomes Peacekeeper 01 and, implicitly, when he’ll stop and be the Riddler again.

That’s sort of where I am with Tynion’s new characters in general. New characters can’t reset – they don’t have a status quo, not yet. They’re still settling in and finding their place. And in the meantime they can do, or be, anything at all. And that is, I won’t lie, pretty exciting.

And speaking of exciting we also have the backup featuring Ghost-Maker and his personal rogues gallery. Today the spotlight falls on Kid Kawaii, a villain who appears as a young child but is actually a nightmare fuel assassination robot. We learn more about Kawaii through a flashback to one of their encounters with Ghost-Maker, all while we also follow the present day Ghost-Maker winding his way through the trapped maze that is the headquarters of Madame Midas.

The Ghost-Maker backups are a real delight. Even as the lead feature is serious, dramatic, the Ghost-Maker backups are a burst of over-the-top manga energy coming at you high speed, and everything about it from the pacing to the dynamic, manga-influenced artwork feeds into that energy.  I’m not surprised that Ghost-Maker is already being sniffed for a television project; he does seem to have arrived almost fully formed, complete with a whole world that we’ve never seen… and he is, to that world, what Batman is to us.

What Tynion and Jimenez are building is, I think, something special. On its own, this Batman run is bombastic, thrilling and relentless… but it also forms the core context for the remainder of the line, with pieces of the story spreading like vines from book to book. Put together, the Gotham titles form a sum greater than its parts… while also building to a potential new status quo as Gotham evolves from a gothic nightmare to a neon one.

Long story short: still loving this run with all the power I can muster. Can’t wait to see where it goes, or to see how the little connections spreading outward from Batman to all of the other Batgroup books will ultimately come together. It should be a hell of a ride.