Batman #109: The Rise of the Magistrate in a City of Fear 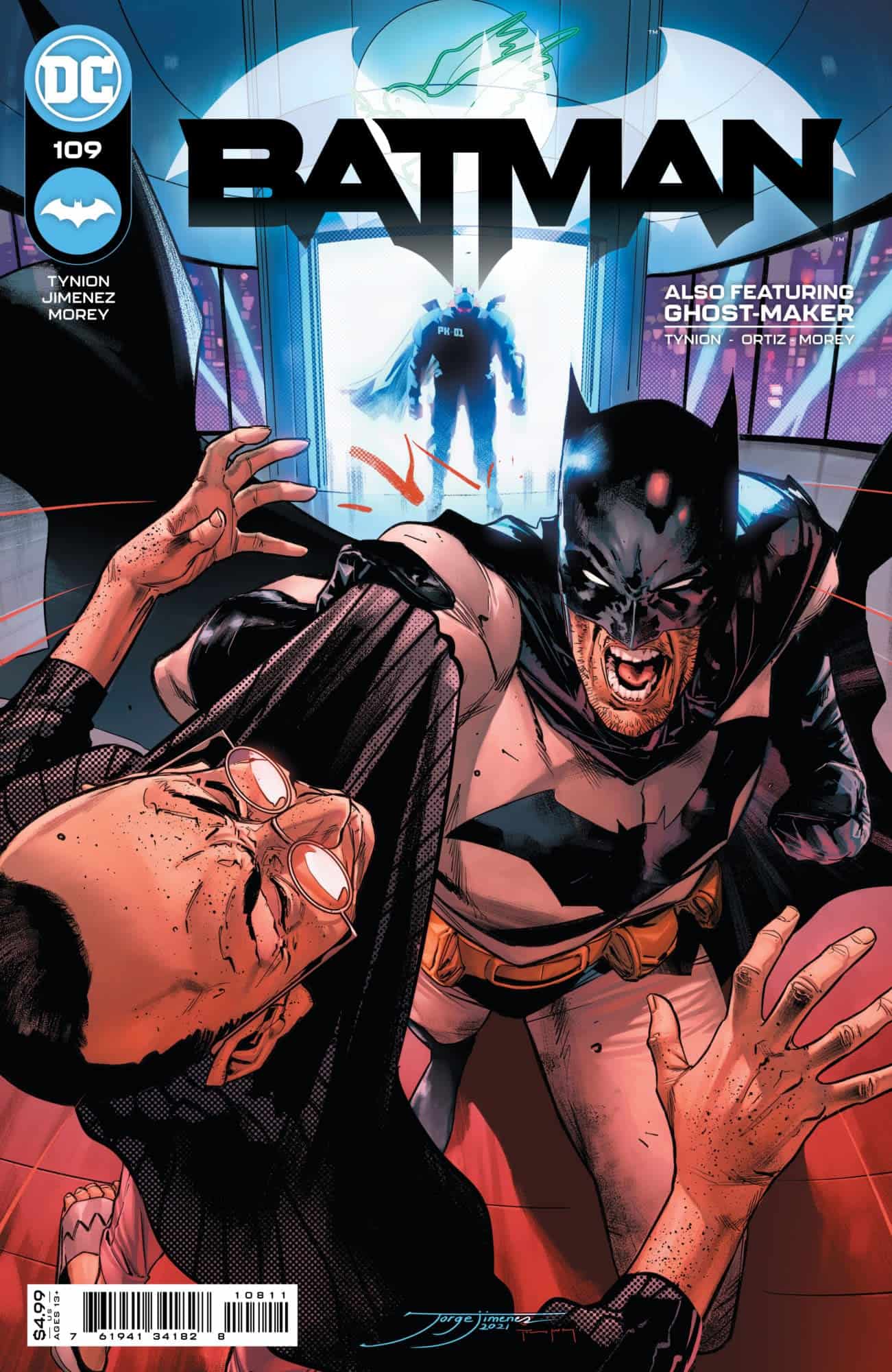 After his recent outing with Miracle Molly, Batman has a new target of investigation in his sights: Simon Saint, the recently returned home billionaire son of Gotham behind the Magistrate program. But, with Sean Mahoney already having undergone procedures to create the first Peacekeeper, will Batman be too late to stop Saint?  Also, Ghost-Maker has been put on Harley Quinn watching duty, putting him in the room when a woman from Poison Ivy’s past returns with a plea to Harley to save Pamela Isley from herself.

And in the backup, Ghost-Maker’s progress through a series of deathtraps set by his enemies inspires villain Brainstorm to share an anecdote from their past clashes…

Last time in Batman… Bruce took on his semi-new identity, Match, and infiltrated the Unsanity Collective to investigate the connection between them and the current fear campaign being waged by the Scarecrow. Meanwhile the hero of A-Day, Sean Mahoney, accepted an offer to become the first Peacekeeper of the Magistrate program.

As “The Cowardly Lot” Part Four picks up, a pensive Bruce has made his return to his new brownstone home, where he and Oracle catch one another up on what has happened since their last conversation, and what they’ve both learned. The temperature in Gotham’s panicometer has risen as Scarecrow’s campaign of toxin-free fear has acted like a match igniting the trauma of a long terrorized populace. The good thing is, Bruce’s journey with Miracle Molly has yielded a name: Simon Saint. The man behind the Magistrate regime, as well as a former employer of the Unsanity Collective. Bruce sets Barbara on Saint’s metaphorical back, gathering all the available information about the mysterious new arrival.

Simon Saint is fast becoming one of my favorites of Tynion’s new additions, mostly because I love a gigantic onion in corporate casualwear. For those of you who haven’t been following the rest of the bat titles, Saint has been turning up (largely by reputation or name, sometimes in person) across multiple titles, most notably Catwoman where he is the force behind the recent disappearance of Ivy… or at least part of her. None of these appearances are necessary as such, but they do add layers – in Catwoman we’ve recently witnessed the extent to which his employees will go to avoid incurring his wrath.  All of this lends a certain dangerous air to him, belied by his mild appearance and even presentation.

Here, the darkness he encompasses begins to reveal itself as a confrontation between Saint and Batman takes a sinister turn that is sure to cause tremors through Gotham for the foreseeable future.

Now, as is common these days, there are a lot of moving parts happening in this issue, but the other primary story, the B Story, follows Harley Quinn and Ghost-Maker. It seems Bruce has Ghost-Maker babysitting Harley and I have to say this dynamic has a lot of potential. Their conversation touches on some pretty good questions, particularly regarding Harley’s behavior – why she does the things she does, and how easily she switches between roles. Ghost-Maker puts out his theory, if it’s even a theory, and the most interesting thing about it, to me, is that Harley doesn’t disagree. I’ll leave it to the reader to pick up the book and see his theory for themselves, but if he’s right then Harley may require rethinking on some of our parts.

But it’s through this part of the story that we finally get some up close and personal time with new character The Gardener. Not unlike many of Tynion’s other new characters, The Gardener ignited significant interest in advance of her previous (and, until now, only) appearance – her elegant design and plant-pups are immediately striking so it’s not difficult to see why.  Here, we finally get the chance to learn about her, and her connection to some other characters within the bat-mythos. Along with that comes a glimpse at Ivy’s newest form, which is, I have to say, absolutely dumbstrikingly stunning.

Which brings me to this thought: when trying to figure out why Tynion’s Batman run has been so successful I think you can’t overstate the impact of his chemistry and alliance with Jorge Jimenez. I’m not saying that Tynion’s own work isn’t fantastic – I’ve been loving this run, the plots the characterization, the dark manic energy and yes the new characters. But without Jimenez’s artwork and, even more importantly, his character design skills I don’t think the parade of new characters would go over nearly as well. Even the classic characters are revitalized by his designs – look at Scarecrow and, when you get this issue in your hands, look at Ivy.

It should go without saying, though I’m saying it anyway, that Tomeu Morey’s incredible coloring is the icing on the cake of beautiful visuals. That palette he uses in Gotham books has come to define the modern Gotham for me in all its grungy cyberpunkish glory.

The team is just brilliant alliance of talents and I think it’s fair to say that without any one of them this book would be a wholly different animal.

Now, in backup land, Ghost-Maker continues his march through Madame Midas’ island, causing chaos and destruction as he goes. His progress prompts one of his rogues, Brainstorm, to warn the others that Ghost-Maker will stop at nothing to achieve his goals. The warning comes with a story from his past and a particularly cruel encounter that has Brainstorm swearing to never underestimate Ghost-Maker again.

Ghost-Maker’s backup is as fun, over the top and punchy as always. Tonally, I almost think it belongs in the current Robin book, as they’re both strongly shonen manga influenced… but there’s something satisfying about following up a full meal of Batman’s dark intensity with this backup, like a dessert with a kick. Ricardo Lopez Ortiz continues to deliver the action month after month with his unique blend of manga and western comics influences, and I’m living for it.

Watching the Magistrate bring itself together in real time is great stuff – both as a story and as a commentary on the current political climate, it works. Tynion’s new characters continue to be reinvigorating to the franchise; I’m very interested in Gardener and in finding out more about her and about her relationship with Ivy. My only concern is, if Fear State doesn’t hit the main Batman title until issue #112, that means there are two issues more of "Cowardly Lot" and I almost feel like the story only needs one. But we’ll see – if it drags for the next two issues then we’ll know I was right.

Ghost-Maker’s backup is high octane action, but it still manages to illuminate and interrogate Ghost-Maker’s character, revealing more of the way he organizes his non-morality, which is exactly the kind of thing I love in a backup story.

Batman #109: The Rise of the Magistrate in a City of Fear