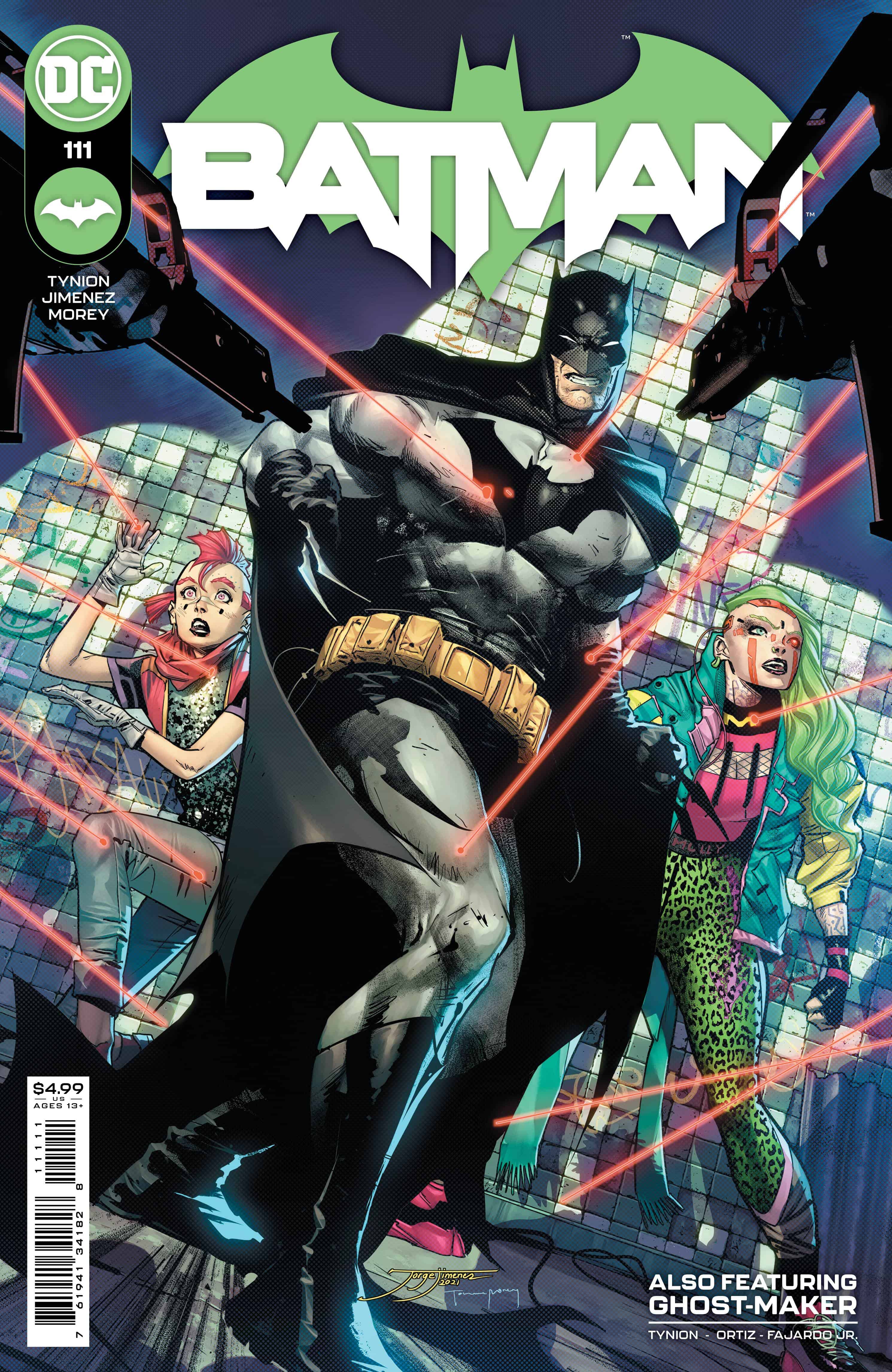 As Peacekeeper-01’s attack on the Unsanity Collective forces its members into hiding within their own headquarters, Batman and his allies Ghost-Maker and Harley Quinn prepare to drop in, cavalry style. The bad news is, that may end up feeding into Simon Saint’s plans.

And, in Ghost-Maker, we get to know the Razorline, one of Ghost-Maker’s most terrible enemies!

When last we visited Gotham City, Sean “Peacekeeper -01” Mahoney had emerged from a confrontation with Batman to descend on the Unsanity Collective. Miracle Molly tried to surrender… only to have Mahoney falsely report that the Collective had launched a violent resistance, thereby “forcing” him to initiate a lethal attack in response.

Suffice to say, as heroic moves go, that isn’t one. From the reader’s perspective that’s not very surprising – we’ve been his authoritarianism in Future State, not to mention that he’s literally allied with the Scarecrow (never a good sign.) Still, in his earlier present-day appearances, Mahoney’s character was a bit difficult to read – was he a good person and fine Arkham employee who had been radicalized by A-Day?  Hard to say, for a while. That is no longer the case. The saying is that power corrupts, but realistically it’s more that power reveals more of who you are as a person, and this has certainly clarified who Mahoney is at his core. It’s quite a fall from grace for a man who, just issues ago, could have passed for a hero.

Fortunately, Miracle Molly is a quick thinker and, with the help of her companions, she’s able to turn the confrontation and escape. That doesn’t mean she can let her guard down, however, as she and the rest of the Unsanity Collective now find themselves trapped in their headquarters with (and by) the world’s most dangerously homicidal police officer.

Salvation may come in the form of Batman, Ghost-Maker, and Harley Quinn, who are closing in on Mahoney, intent on finishing the confrontation Batman only recently escaped. Of course, that doesn’t necessarily mean everything is going to go according to their plan.

Or anyone’s plan, for that matter. Because as many people know, this is the final issue of “The Cowardly Lot” –essentially a prelude to the larger Batman event “Fear State,” which begins next month. It’s a Gotham-line-wide event, but the Batman title is, of course, the place of origin from which the ripples radiate outward. As such, the pieces are now beginning to settle into their starting positions on the board that is Gotham. In this issue, we learn more about the specifics of Saint’s plan, but perhaps more importantly we finally gain insight into the Scarecrow’s plans, which have been somewhat oblique until now.

Because really, why is the Scarecrow working with Simon Saint, to begin with? Admittedly his situation was likely a bit precarious after A-Day (assuming he wasn’t responsible for it, given that the Joker denies involvement), but allying with someone who aims to drive people like Crane out of the city or into the ground hardly seems likely to improve his lot. That implies, has always implied, that Crane may have his own reasoning, his plans, and his own goals.

Unsurprisingly, I really enjoyed this issue. It is a more transitional chapter than most, even given that the arc itself is more transitional than anything else. Despite that, it does a great job of setting up for Fear State, answering questions, and clarifying where certain characters stand. Sometimes it’s not where readers may have assumed they stood – when Miracle Molly debuted, she was largely touted as a new villain, but she is a villain? Is the Unsanity Collective a villainous organization? Those answers have bee coming into focus for a few issues now, but here is where we really start to see these characters reveal themselves.

More than anything else, though, Batman 111 puts the city firmly on the road to the horrorshow that is Future State’s authoritarian Magistrate regime. I’m not assuming that the future depicted there will literally come to pass – I doubt DC has a firm commitment to any specific future. However, using that event was certainly an effective way to raise the stakes, because we know what the characters are just beginning to understand: that the Magistrate will crush Gotham in its authoritarian grip if allowed to truly come to power.

From the focus on new characters to the elevation of the classics like Scarecrow, none of this would work half as well without Jorge Jimenez. His masterful portrayals give each character, new and old, their own unique feel and flavor as he brings this changing Gotham City to life. This may be an odd thing to say but Batman, who has perhaps the best superhero costume of all time, looks a bit antiquated in this new world – and that’s not a complaint. I can’t say whether it’s intentional or not – I’m not Jorge Jimenez – but it absolutely works thematically as Gotham begins to move in a direction that threatens to cast him out, or leave him behind.

We also have the final chapter of the Ghost-Maker backup as well! …kind of, because as it turns out this side story is going to continue in the next Batman annual, due out in November. Now, I’ll be honest, I find that a little frustrating. There is this tendency I’m picking up for backup stories (the longer-running ones like Ghost-Maker, Robin, and Midnighter) to run through a pre-climactic point and then spin off into an annual or another series and I enjoy that, actually. Can’t knock a roomier finale. But…

We’re at the beginning of August! There’s no resolution until the end of November? Gah!

That little snag aside, I very much enjoy the backup itself along with all the new characters and concepts (different types of power sources for villains, even!) it’s bringing to the table. I’ve seen people refer to these characters as new additions to the Batman rogues, but… they’re really Ghost-Maker’s enemies, aren’t they? That’s not to say I would object to seeing these characters turn up in Batman’s territory (or Batman in theirs for that matter) – I think that would be incredibly fun. But I don’t want to instantly assume that this isn’t an attempt to set up Ghost-Maker as a viable solo character independent of his connection to Bruce, because I think that has a lot of potential, too.

This issue focuses on the history between Ghost-Maker and Razorline (named as an “unspeakable, otherworldly horror” in his intro back in Batman 107). As it turns out, Razorline is certainly an unspeakable horror but he isn’t quite otherworldly… but I’ll leave that to you to find out.

James Tynion IV continues to push Gotham in new and exciting ways, redefining the city and its denizens for the foreseeable future. Batman 111 is a largely transitional issue, moving Batman and Gotham toward the incoming 'Fear State" event, and Ghost-Maker toward the conclusion of his backup story in the 2021 Batman Annual later this year. While that does make it light on resolutions for a book that technically ends two separate features, it does deftly accomplish what it is trying to do: prepare the world, the characters, and the readers for "Fear State"... and Gotham's terrifying future. As it happens, Fear State has me more excited than any Bat-title crossover has in years, so if that's what we're here to do this month, that's fine by me.

Also, I want a Ghost-Maker series.