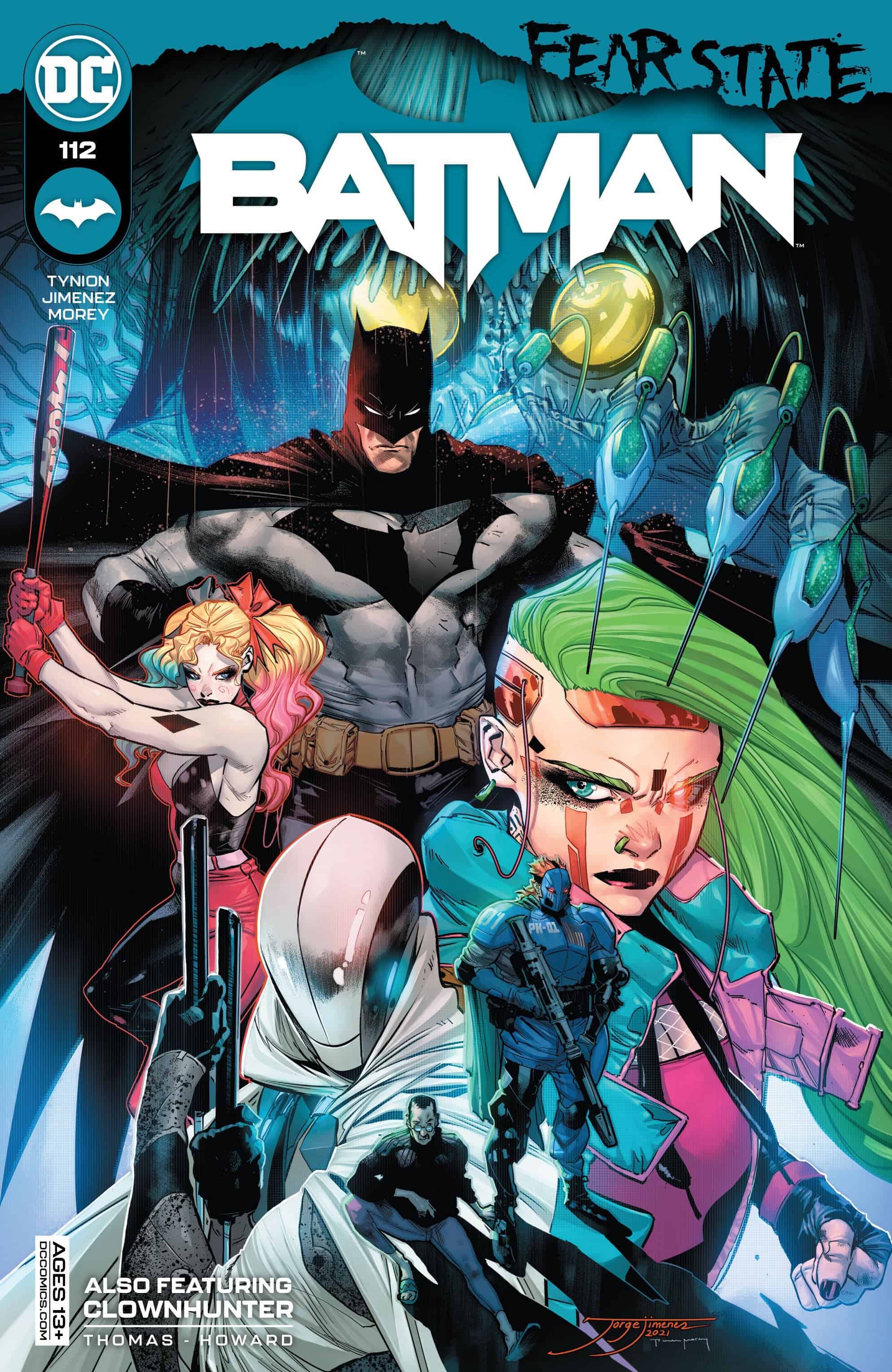 Batman escapes Scarecrow and must make his way back to the Clocktower to regroup and strategize with the rest of his allies, while Peacekeeper-01 wanders the streets, maddened by an ultra dose of terror as administered by Jonathan Crane. And, elsewhere, Simon Saint scrambles to close the door on the horror he’s accidentally unleashed on Gotham.

And in the backup, Clownhunter stumbles into a potentially fatal situation at the top of a building.

Before we get started, I want to make sure one thing is clear in case this makes a difference to anyone as far as their feelings about this issue: The first ten pages of Batman #112 are the same as the pages included in the Free Comic Book Day special.

Despite being one of Batman’s oldest rogues, Scarecrow has had some difficulty being taken seriously as a primary threat. He has had his share of smaller stories, obviously, and has appeared as a secondary threat in various stories as well, including the Nolan films, but he’s never really had a big showcase that really pushes Jonathan Crane as an A-list villain.

In building “Fear State,” James Tynion IV has wisely chosen to take Scarecrow’s plots in a different direction – an attack on Gotham itself rather than an attack on Batman specifically, and undertaken in a way that is bigger, more difficult to manage, and which has a wholly different aim. The specifics of that aim were only just revealed a week back in Fear State Alpha, where we learned of Simon Saint’s intentions for Gotham: to push the city to a point of absolute terror that would therefore force the city to evolve. Crane joins him in this quest, though for wholly different reasons.

Unlike Saint, Crane lacks even the pretense of noble intentions: as a scientist and both a master and student of fear, Crane mostly wants to see whether this will work. That difference in their ultimate goals has now created a schism between Saint and Scarecrow that the former is just beginning to truly understand – as evidenced by his repeatedly being sick even as his Magistrate propaganda plays in the background. You can’t really blame him. Saint enlisted a monster that he somehow managed to underestimate, and now the monster is loose, so… what to do?

For now, at least, the answer is to try and forcibly regain control of the narrative first by bringing in Peacekeeper-01, currently dosed with fear toxin and wandering the streets in an incredibly powerful suit of armor, before he causes unrecoverable harm to the Magistrate program.

Meanwhile, the newly released Batman is left to regroup with his allies and try to form some semblance of a plan on how to move forward from here. Future State is lingering in the backdrop of the city, threatening to come in… the question is, will they turn it away or end up farther down the road to authoritarian rule?

Way back when James Tynion IV was beginning his run, he posted a good chunk of his initial Batman pitch document on his newsletter. The document described his vision as an action-horror superhero book, and while “Their Dark Designs” did begin to pay off on that promise, it’s here that we really begin to see his initial vision reach fruition.

As much as I love Tynion’s writing in itself, this book would not work half so well without the powerhouse team of Jorge Jimenez and Tomeu Morey. Jimenez’s work is, as always, dark and bold; at times his use of layouts is nearly as disorienting as the effect of Scarecrow’s machinations. This is particularly evident in the Peacekeeper-01 pages, where panels twist and cascade down the page, echoing the chaos portrayed during Batman’s escape as well. Morey’s colors are expertly used to portray Mahoney’s madness, Batman’s fear, the terrifying landscape that Gotham has become.

Our backup for this issue, now that Ghost-Maker’s turn has come to a temporary close, is the first of three chapters of DIY by Brandon Thomas and Jason Howard. It follows Clownhunter in what could become a turning point moment – for good or ill. This story is extremely difficult to talk about without giving away major plot points but let us say it begins with The Scarecrow tossing Clownhunter off a building… and his day just becomes more difficult from there. It’s a short and not-so-sweet spotlight with a gut-punch of an ending and serves as something of a follow-up to his recent Secret Files special.

"Fear State" is shaping up to be the most exciting Batman-line event in years, elevating an underrated and underused villain to A list status while setting the stage for a new Gotham to emerge from this latest trauma... for good or for ill. Clownhunter is constantly falling into these problematic situations, and this time could be the worst of all, at least for him. For me it’s great.