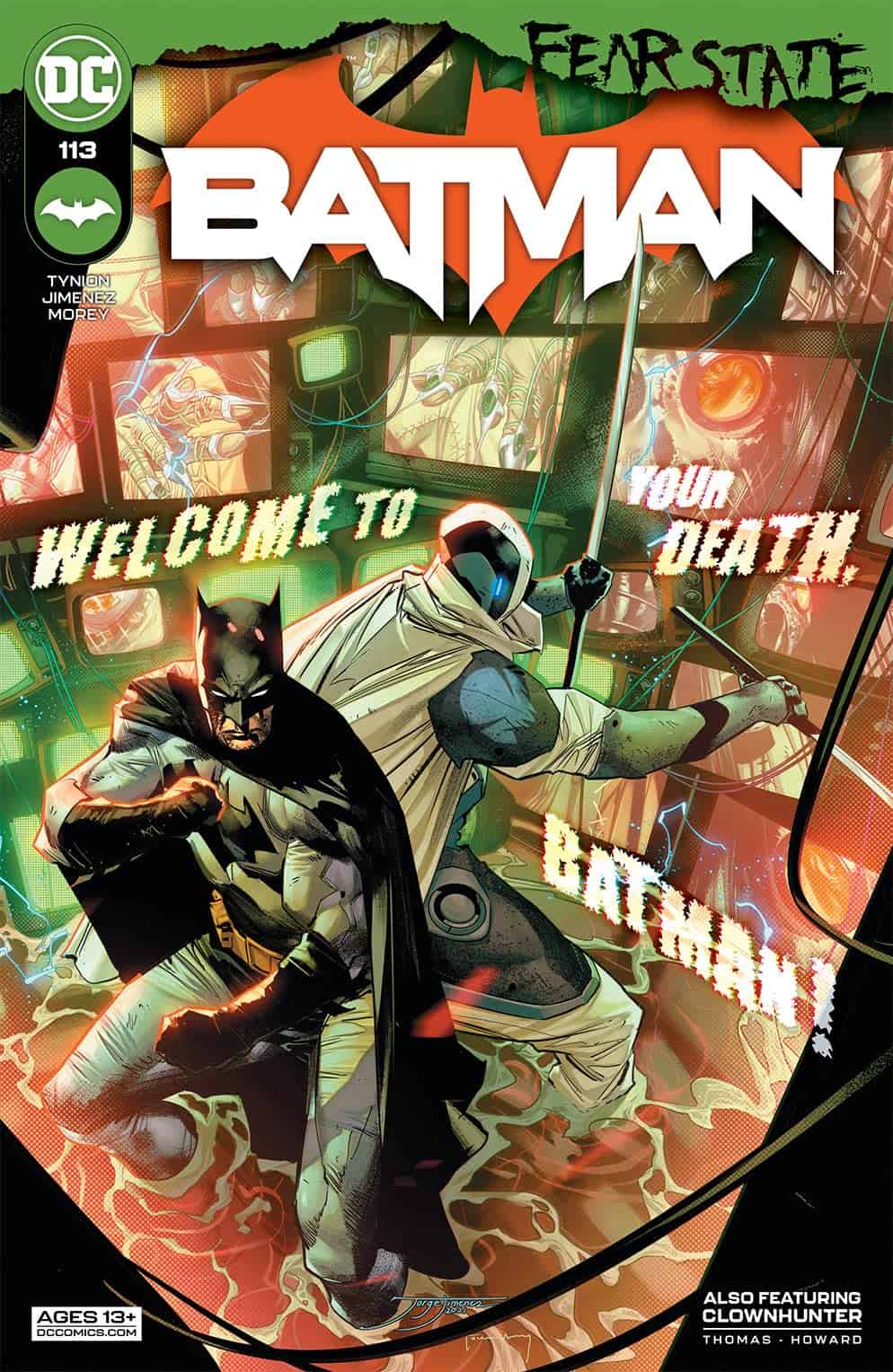 As the Magistrate continues to take control of Gotham City, Batman fights a battle inside himself, as he seeks to uncover and dismantle any psychological conditioning left during his time under the Scarecrow’s control.

When last we left our intrepid heroes, Batman had arrived at the Clocktower to regroup, Simon Saint set loose his secret Peacemaker to bring Sean “Peacekeeper-001” Mahoney back dead or alive, and Barbara Gordon’s Oracle persona had been sniped out from under her by a mysterious trouble-maker we shall call Seer. That person, identity unknown, helped to whip Gotham into a frenzy, urging them to take up weapons and telling them that Batman has been killed.

Now the Batfamily’s attempts to retain some semblance of control over the situation are being made exponentially more difficult by Seer’s continued broadcasting via Barbara’s network. Of course, that isn’t going to stop them from attempting. First on the list is Batman paying a visit to Commissioner Montoya and facing down some of the Magistrate’s robominions.

Still, the meat of the story comes after the battles when Batman and Ghost-Maker embark on a journey into Bruce’s psyche. The goal is to root out and destroy any psychological programming that may have been “installed,” for lack of a better term, by Scarecrow. But that isn’t all – because their little brain walk eventually leads them somewhere Bruce could not have anticipated… and that side trip could be the key to saving Gotham from the Scarecrow, and from itself.

For the past 6 months we’ve been discussing that two-month event, Future State, regularly. This is because the issues since then, every issue since March, has been revving up to reach this point: the moment when Gotham’s future is decided, and we find out whether the totalitarian regime of the Magistrate will ultimately come to power in the mainstream DCU as well as in that alternate future.

Now… that’s probably not going to happen. An anti-vigilante police state Gotham would be a bit much to deal with on a permanent basis even if the regime’s creator weren’t leaving the book. Even so, Batman 113 does an excellent job of showing us what that would be like… and convincing us that, in another world, it absolutely could occur. Tynion has said that the main reason for this story was to elevate the Scarecrow from a B-list villain, and while it’s too soon to know whether his promotion to A-list will stick, it’s laying that groundwork and doing so effectively.

The dynamic between Ghost-Maker and Batman continues to be one of my favorite things about this book as well – their banter is a pleasure, and Ghost-Maker is perhaps the most charismatic of Tynion’s new characters, at least to me – I’d also suggest he has the greatest chance of going the distance as a character aside from perhaps Punchline.

Gotham’s current chaotic state is beautifully represented by Jorge Jimenez’s crazy layouts – panels at odd angles, overlapping one another, enhanced by Tomeu Morey’s technicolor wizardry. Jimenez has really been a blessing to this book – his Batman is a force of nature at times with his pitch-black cape extending behind him to the edge of the panels and beyond; in one panel, his pose even echoes the classic Superman #1 cover (also echoed for the recent Superman: Son of Kal-El #1) But in other places, off the battlefield, Bruce is exceptionally, heartbreakingly human.

Just all around a great second chapter for this intriguing Batman event.

The backup is a bit more complicated a case. It’s not that the story is bad, it’s just that I’m not actually sure what’s happening in it due to its being something like a prolonged dream sequence. I wish it could have been released as a one-shot fear-state tie in because, while I have confidence in Brandon Thomas’s story and the artwork is dynamic and powerful (and often inventive and interesting), it’s difficult to invest in a story that won’t make sense until you see the ending when the ending is weeks or months away. So I’m going to withhold judgment on this one until I see it come together and then talk about it after the final installment, I think.

Batman 113 continues to advance the Fear State plotline, sending the characters careening toward a decisive answer to the question: Is there a place for the Magistrate in Gotham City? It is big and thrilling and still manages to maintain its humanity and the inter-character dynamics that have made the Gotham titles such a pleasure.

Meanwhile, I am withholding judgment on the ClownHunter backup, as it’s difficult to determine how much I like it before I know what’s going on! So I’ll come back to this once the story has wrapped and give my final thoughts at that time.