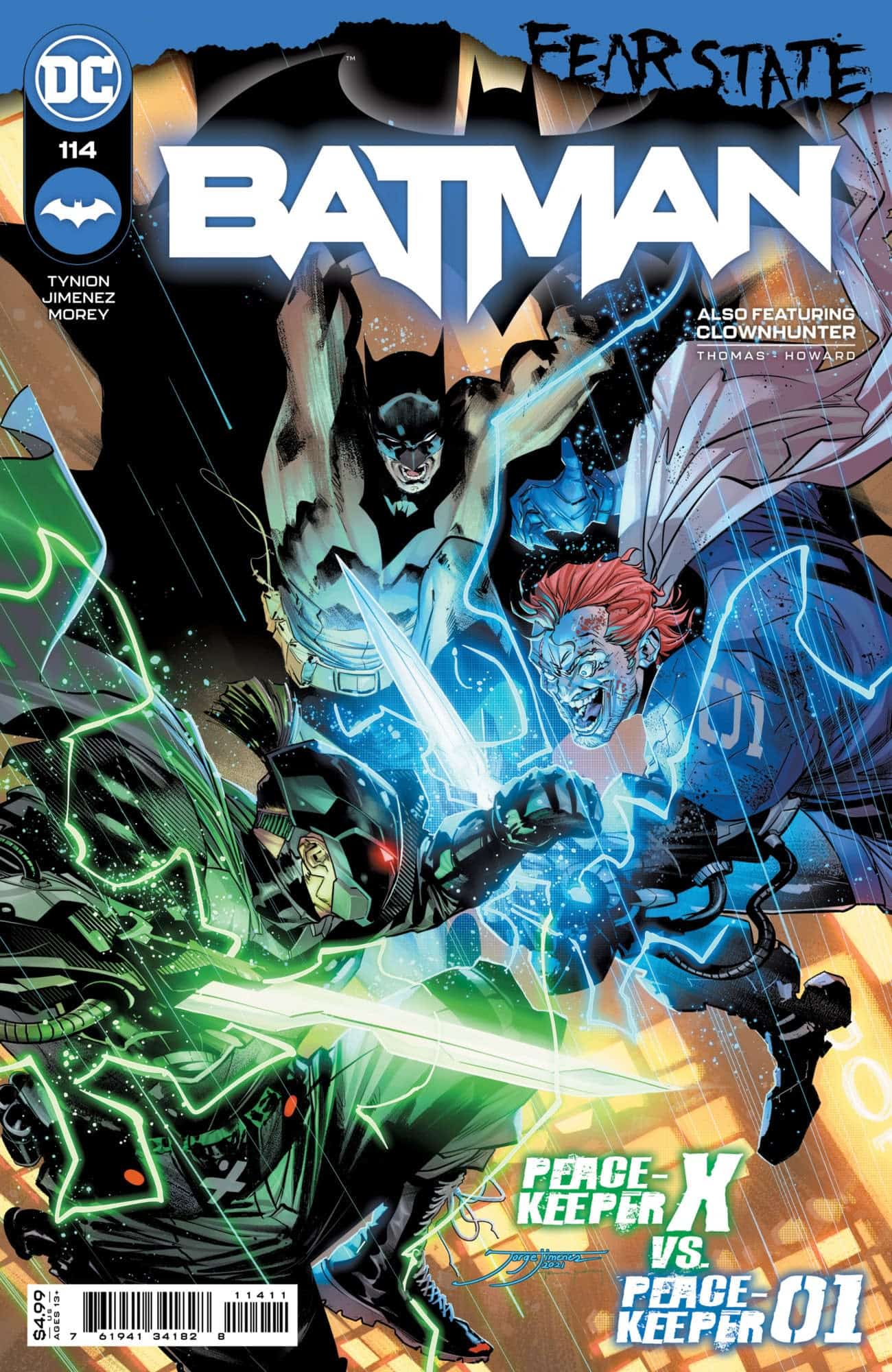 Miracle Molly and Queen Ivy commiserate from Haven about the evils of society and how to approach them, ultimately sparking a realization in Molly that may turn the tide of the Scarecrow’s attack. Meanwhile, Peacekeeper-X goes to blows with Peacekeeper 001 in a desperate attempt to bring down the fear-dosed supercop that may not go as Simon Saint had hoped.

And in the backup, ClownHunter finally reaches the end of his near-infinite loop of hallucinations to find himself in a much different position than he had realized.

During the Fear State event, the Batman title has served as the backbone for the Gotham line, sometimes focusing more on the event surrounding Scarecrow’s assault on Gotham and sometimes focused on Batman himself. Last issue was the latter, with Batman taking a trip into his own mind alongside frenemy and shounen rival Ghost-Maker… a trip that ended up revealing a connection between Ghost-Maker and Jonathan “Scarecrow” Crane that brought Crane’s intentions into sharp focus.

In Batman 114 we shift back to an almost ensemble approach, bringing readers up to date with the events of the city.

First, we visit the floral haven maintained by Gotham’s own Queen Ivy, whose vines have infiltrated the foundations of the city, giving her unprecedented power over its essential well-being. Fortunately, she hasn’t used that power for ill just yet… but is she willing to use it for the city’s benefit? For the moment, at least, it seems she isn’t, though Miracle Molly may perhaps have sown a few seeds for a change.

Ivy and Molly’s conversation is interesting if a little heavy-handed in places. They are each people who have turned their back on the “normal” world after finding themselves seriously and consistently disappointed. While they have very different approaches to dealing with that disappointment, yes, and Molly’s remnant faith in humanity is certainly stronger and burns brighter than Ivy’s, in the end, they’ve both chosen to distance themselves from humanity as it stands and find refuge in “other” things, be it the transhumanist collective or, well, plants.

According to Molly, the Unsanity Collective believes that all people are traumatized by the world as it is and that to become their best self, they have to shed the baggage and anger brought upon them by these traumatic experiences. It’s almost the opposite of Scarecrow’s Fear State theory – that the trauma must be allowed to take hold until you are forced to evolve – but it fits well with the general theme of the story as it stands. Whether it’s Ivy hiding from the world, Molly turning her back on mainstream society, Simon Saint attempting to impose control on the uncontrollable, or the Scarecrow pushing society to the brink of madness and waiting for it to rebound, we’re essentially looking at different ways to manage the damage done to a person throughout a normal life in normal society as it has evolved.

Sean Mahoney, too, has his share of baggage. As we follow his confrontation with PeaceKeeper-X, the agent sent to neutralize him now that he’s been affected by fear toxin, we begin to unlock pieces of his psyche and his history – his fear, and his anger. For the past 7 or so months, we’ve seen him rise from anonymous guard to hero, and seen how that change has affected his already fragile psyche. Now, pushed beyond the edge of madness, he may have become more dangerous than his creators ever imagined.

If there is one complaint I have about Fear State, it’s that the Scarecrow himself – despite being the primary architect of the situation they’re in – is barely present. This was envisioned as a story to elevate the Scarecrow to A list status – I’ve referenced that intention many times myself during the first month of, and the leadup to, the Fear State event. But so far, it does seem to be more about the battle against the Magistrate with Crane as a background figure just kind of watching things unfurl. Hopefully, this will change in the next handful of issues, because as much as I like the Magistrate as villains, I do think Scarecrow deserves the spotlight for once.

Unsurprisingly, I have essentially no complaints about Jorge Jimenez’s artwork. It is, as always, a standout feature of the book, breathtaking in its beauty with a kind of grace that makes the images leap from the page. I could do without the freckles on Ivy (and Barbara but that’s another issue) but other than that Ms. Isley has never looked most regal or beautiful. After years of strange costuming decisions, she has finally found a design just as impactful as that first leaf-themed leotard. Frankly, I don’t really expect it to stick – beautiful though it may be it’s also not especially practical for a villain or antihero or whatever Ivy is going to land on. But for the moment I’m just enjoying her and her grassy crown.

In our backup for the month, we have the final part of ClownHunter by Brandon Thomas and Jason Howard. Last issue I said that it was difficult to follow the plot or say what I think of it given that it was difficult to tell what was going on. That’s true but in the end, I don’t think anyone will be especially surprised to discover what it is that’s behind the hallucinations and confusion.

The ending, while I won’t give it away, is a satisfying turn in ClownHunter’s ongoing story and will hopefully provide an escape from the niche that he’s been languishing in since the end of Joker War. I enjoy his character enough to hope he survives the writer shift, and this could make a difference in his trajectory for the better. Jason Howard’s artwork continues to impress – the story wouldn’t work half as well without his mindbending designs and layouts

The only thing is, there’s a certain character here who just really needs to settle on a name. Honestly… I’m begging. Please. Just, really, any name.

Despite a few heavy-handed moments, Batman #114 sticks the landing where it counts, exploring the effects of modern society on the human psyche while providing intense action and stunning artwork. The ClownHunter backup pulls together all the threads of the previous stories in a satisfying manner while providing a possible future path for the character that may set him on a more promising – and narratively versatile – path. Excellent all around.