Batman #115: The City Breaks the Saint 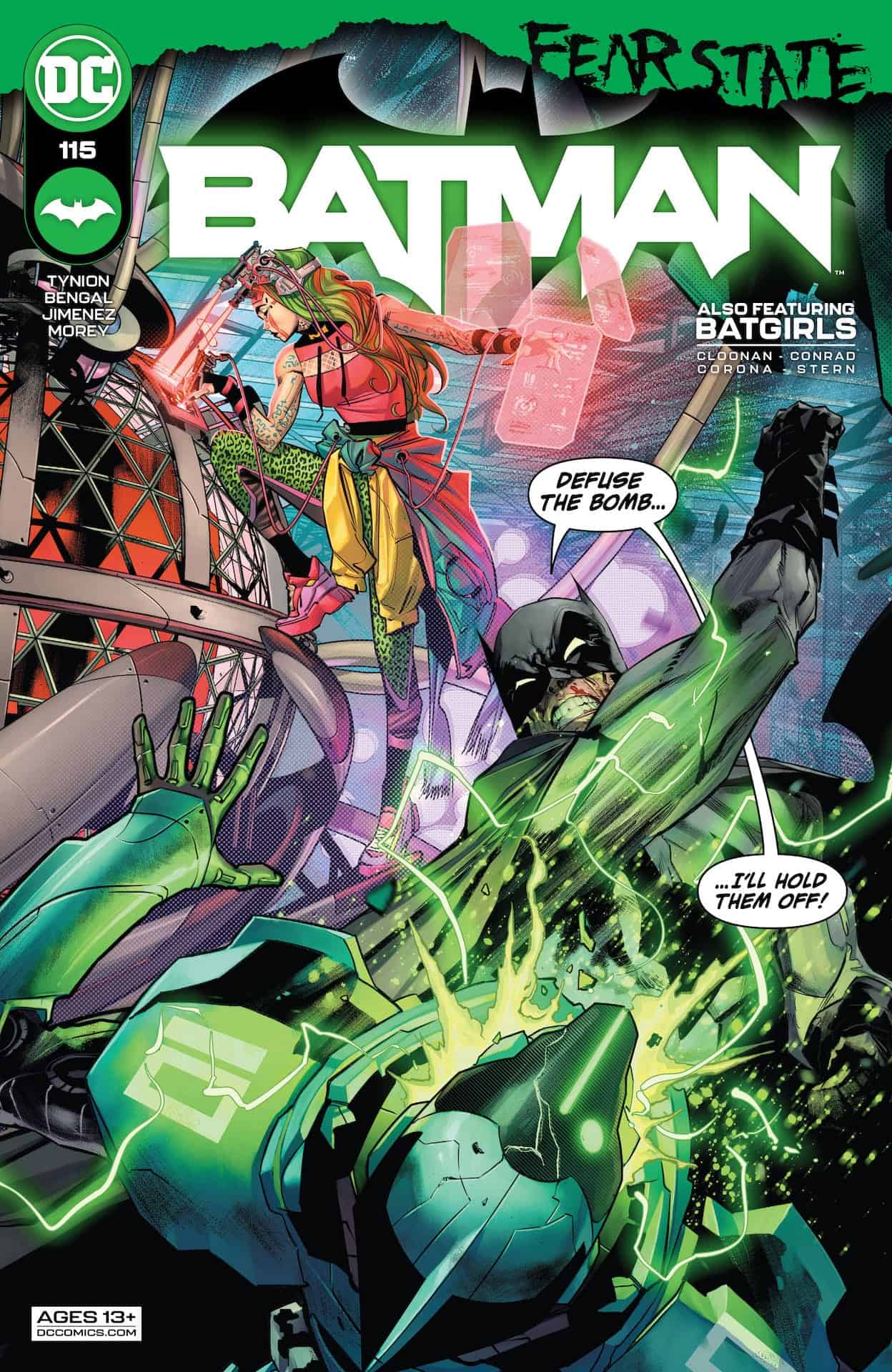 Simon Saint’s mental state continues to deteriorate with the loss of his personal assistant and anti-Mahoney backup plan, Peacemaker-X... leading to a decision that could have dire consequences for Gotham City. Meanwhile, Queen Ivy learns more about Master Wyze of the Unsanity Collective... and Peacemaker-01 falls into the hands of the infamous Scarecrow himself. Last but certainly not least, Batman and Miracle Molly race to locate a certain item before the Scarecrow can use it to further escalate the panic in Gotham City.

In our new backup feature, Batgirls, Barbara struggles to wrest control of her system back from the mysterious Seer, while Batgirls Cassandra Cain and Stephanie Brown are boots on the Magistrate-infested ground of Gotham.

There should probably be a rule, circulated among those of ill-intent, that says you should not put those you truly care about in harm’s way. I say this because this issue, Simon Saint is rather traumatically exposed to the consequences of eschewing those rules.

Last issue, Saint’s backup supercop, Peacekeeper-X – also his personal assistant Ricardo – went down in flames at the hands of Peacekeeper-01 and that seems to have provided the gas to escalate Saint’s descent into mania, culminating in Saint screaming incoherently at the news of a new (Ivy-Related) complication and declaring that Gotham is beyond salvation. That’s some nasty foreshadowing, and it pays off by the end of the issue.

In the meantime, however, there are other factors to consider as well. For example, Ivy herself, surrounded by the Unsanity refugees left with her by Harley Quinn and Gardener. Though still conflicted, Ivy does show the remnants of her humanity and compassion… leading to a conversation with Unsanity leader Master Wyze that answers several questions about the technology behind Unsanity, and how he came to have it.

Like many of the newer characters coming to prominence today, Wyze turns out to have a tie to another, classic Gotham Rogue. More and more we’re seeing heroes and villains like Wyze, Punchline, etc who are responses to the first wave of Gotham’s colorful personalities, which I think is both a smart and a telling move on Tynion’s part. Not only do these connections ground the characters in the Gotham we know, they also draw emphasis to one of Tynion’s stated goals: to push the Batman timeline farther than ever before to a place about halfway through the Year One-to-Batman-Beyond trajectory.

As is often the case in crossover issues, Batman himself doesn’t make his appearance until somewhat into the issue, where he arrives in mid-trek alongside Miracle Molly. She believes that she has the key to what may be the next part of Scarecrow’s plan yet… and if she’s right, then things are just beginning to escalate.

This issue features a guest artist, Bengal, onboard for the first time in quite a while. I’ll be honest – this is a little disappointing not because of anything about Bengal’s work, but because it’s awkward to switch artists in mid-arc. This is especially true with artists whose styles significantly differ – in this case through the contrast of Jimenez’s highly intricate, detailed work and Bengal’s simpler, almost animation-esque figures and minimalist backgrounds. That said, I do think Tomeu Morey’s mastery of color and atmosphere has helped to bridge the gap. I also can’t fault Jimenez for needing a break considering how long he’s been going and how common guest pages or issues have become.

All that said, looking at the artists’ work individually and outside the context of their sitting side by side in this book, Bengal’s work is charming and graceful. I would love to see them on a less horror-themed book or even just a Batman story that isn’t quite so dark because their work has a grace to it that I enjoy on its own. The almost alien flora of Ivy’s haven, in particular, jumps out, and the unique color choices Morey has made in bringing them to life make them pop all the more. Jimenez’s artwork needs no introduction – it is stunning as always and well-placed in handling the most nightmare fuel segments of the story.

Generally, I am continuing to enjoy Fear State… however, I fear (…sorry) there is a bit of event fatigue starting to settle in as well. This may be odd since it’s only been two months. It may be because Batman’s having returned to a biweekly schedule makes the time seem longer than it is, but admittedly I got a bit exhausted after 2 months of Future State as well so part of it is probably just me. With a single arc in a single book, I can go on for months without a problem – 4 issue arc? 6 issue arc? 12? It’s fine, but when we get to these massive crossover events that take over the entire line, I usually find myself really excited for a while and then eager to move on to the next thing.

That said, there’s a lot here to be excited about. Watching Simon Saint deteriorate as the situation in Gotham spirals out of (his) control has been entertaining, but it’s even more interesting to find that it may, in the end, be Gotham that breaks him rather than the other way around. Miracle Molly continues to be one of my favorites of Tynion’s army of new characters – she has the kind of specialized skill set that allows her to be hyper-effective in her area without overshadowing everyone else.

More than anything else, Fear State is situated to be a catalyst for largescale changes in the dynamics of Gotham City, with Bruce leaving Gotham and the rise of Jace Fox as Batman, not to mention smaller but nonetheless important shifts like the formalization of the Batgirls team and Catwoman’s status quo change in January.

Now, with the Clownhunter backup concluded last issue, we move to a new story – Batgirls starring in “Clueless,” by Becky Cloonan, Michael W. Conrad, and Jorge Corona – which serves as a pilot of sorts for the upcoming Batgirls ongoing title. As an opener, Part One makes a strong impact, quickly establishing the situation, timeline, and stakes, along with the character dynamics and even the villain. The latter, the Seer who has been causing difficulty in the Batfamily’s lives for the past few months, makes a faceless appearance where we begin to get the first hints into what, exactly, she is doing and why.

I’m a huge fan of Cloonan and Conrad’s both individually and as a writing team so I’m perhaps a little biased here, but I really enjoyed this despite not being the biggest fan of some of the protagonists. Corona’s artwork leaps out at me as well – it’s fresh, stylized, and looks amazing paired with color artist Sarah Stern’s palette wizardry. Also, I want to take a moment to appreciate the magic being done by Becca Carey, who is juggling at least five different font/bubble types and doing it with style.

Despite a bit of event fatigue settling into these weary bones, both Fear State and Batman #115 remain exciting and impactful, setting the stage for the next year or more while exploring the question: how far can a person, or a city, be pushed before breaking?

Bright, fun, and fresh, Batgirls serves as an excellent introduction to what looks to be a promising run on a long-awaited team.

Batman #115: The City Breaks the Saint