Batman #116: Past the Breaking Point! 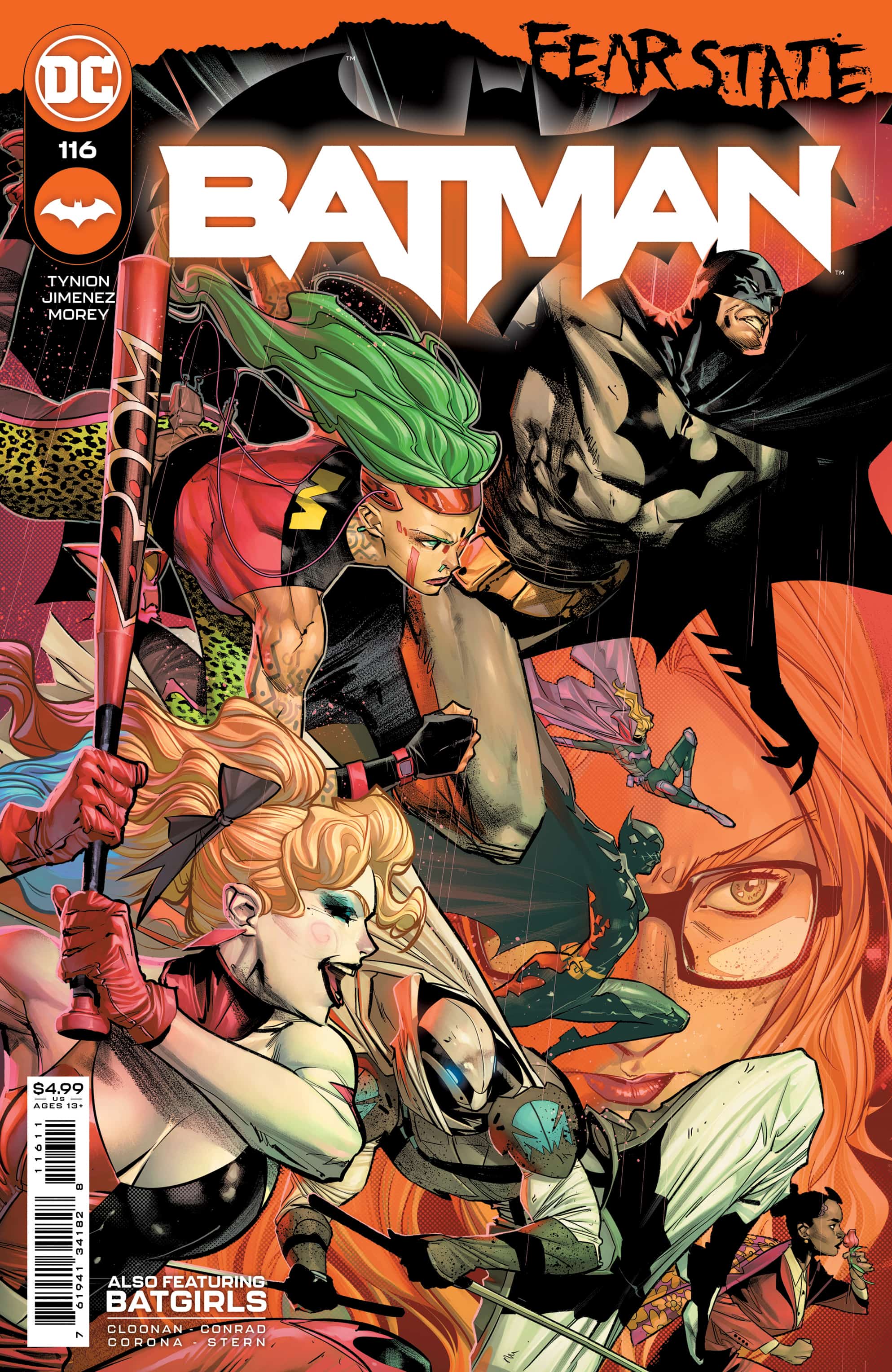 Batman and Miracle Molly’s attempt to get ahead of the Scarecrow’s next move lands them in a more difficult spot than ever as they come face to face with both Crane himself and his plans for Peacekeeper-001, as well as Gotham itself.

The Magistrate’s moves on Queen Ivy’s Eden threaten the whole of the city as Ivy is pushed to the limits of her tolerance for humanity.

We’re entering the homestretch with Fear State, which means we should be starting to see things come together and ramp up for our ultimate climax. I’ll do a more thorough post-mortem on the plot after issue 117, so for now let’s just look at how the threads are, or not, coming together.

So, this issue much like the last issue primarily moves down two paths: The events in Eden with Ivy and the Unsanity Collective and the events with Batman and Molly’s attempt to secure the Mind Machine, which Molly (correctly) suspects of figuring into Scarecrow’s plan to inflict mass trauma on Gotham in order to force it to evolve.

When last we left that first road, Ivy had come to something of an understanding with Master Wyze, leader of Unsanity, only to find herself under attack by the Magistrate as Simon Saint lashes out at the city and desperately tries to salvage something of his rapidly deteriorating power-grab.

As it turns out that isn’t the best move, which anyone with a rational mind would realize. As Ivy has her countless vines wound through the foundations of the city – and is more than capable of causing a catastrophic collapse – provoking her is the most dangerous thing anyone could do at the moment. She has wound her vines through the foundations of the city – something Saint’s subordinates told him just before he gave the order to take her head.

Of course, Saint is far beyond rational at this point – his last cool and collected thread was plucked when his protégé Ricardo was killed fighting Sean Mahoney… not that he had many such threads to begin with. Truth be told, you could even argue that he may actively be trying to provoke Ivy into razing the city, considering the last thing he said before giving the order was that Gotham needs to be wiped off the map.

If that’s the case, he’s dangerously close to getting his way, as Ivy does not react well to having her Eden invaded by armed men. Of course, if you’ve been following the story throughout the other batbooks, you may have some idea of what may – may – be able to de-escalate Ivy’s temper… and those threads start to coalesce toward the end of this issue.

Down the second road, we find Batman and Miracle Molly. Last issue they went on the hunt for the Mind Machine, a memory affecting device utilized by the Unsanity Collective to store and erase traumatic memories, under the (correct) belief that the Scarecrow may be planning to use this machine to inflict a state of true and absolute terror on the city. Along the way they met and dealt with Breaker, a friend of Molly’s from the Unsanity Collective last seen having a near-fatal smackdown with Peacekeeper-01 – have to say I was glad to see he’s still ticking, albeit under mind-control.

This issue, the duo continue their search, which brings them into unexpected contact with the Scarecrow himself. Crane seems to be just… hanging out in the sewer, waiting for them, chilling. But that’s not entirely true – he’s also in the middle of torturing Sean Mahoney, whom he picked up last issue, in an attempt to force his mind to evolve.

Fortunately, Batman has been successfully desensitized to Scarecrow’s fear-inflicting device, and therefore Crane’s gimmicks no longer work on him. Molly, on the other hand, is not nearly so lucky and it’s Scarecrow’s ability to affect her that forces Batman to play along with the Scarecrow for a short time… which leads to further exposure of Crane’s plan, as well as a pretty nasty plot twist.

If you’re anything like me, you’ve probably been watching Fear State and thinking back to Future State and wondering how these pieces fit together. Fear State has been repeatedly presented as the turning point where Gotham either careens toward the authoritarian regime seen in Future State or turns away from that pathway. While that’s always made some sense, there were a few bits and pieces that didn’t quite click for me such as… how did Sean Mahoney come to be the leader of the Magistrate? What happened to Simon Saint? How did Scarecrow, who is clearly the mastermind behind this entire situation, end up an underling in Future State: Harley Quinn?

We’ll probably never know the full story since I doubt that the titles will end up going the Future State route, but it is at least addressed in such a way that we can fill in the blanks for ourselves and that’s good enough by me.

I have a fair number of other thoughts about Fear State and Tynion’s run in general, but I’ll just keep a lid on that until next issue when we close up all the threads and prepare for Josh Williamson to come on board. For now, I’ll just say that, despite my previously discussed event fatigue, I do think this issue has accomplished everything it needed to achieve, and it has done so with style and aplomb. The situation with Ivy continues to be, honestly, sort of weird – I’m not sure why we ended up with this two Ivy situation to begin with (yes, I did read the Harley & Ivy miniseries where this happened, but I was confused about why they went that direction back then, too) but I’m hoping we’re about to see it resolved once and for all.

There’s never a day when I want to voice a complaint about Jorge Jimenez’s stunning artwork. That said, I do think he seems to be (understandably) showing the strain of this schedule – a few pages seem stiffer, less dynamic, than usual and at times he seems to revert to his earlier style as seen during his Justice League run with Scott Snyder. This is especially evident on the last page, where that more babyfaced and less realistically proportioned body type makes a return – it’s not a problem, both styles are beautiful, but it is noticeable.

Moving on to Batgirls Part 2, we find Cassandra Cain and Stephanie Brown under fire from the Magistrate, who have framed Cass for murder and then used that murder as a justification to come after them with a kill order. Their attack on the Batgirls ultimately leaves the skyline of Gotham City permanently changed and sends the two of them on the run with their reputations in shatters…

It’s no surprise coming from this team, but Batgirls continues to be Great Stuff. Cloonan and Conrad are always top-notch wherever they go, but their voices bring a freshness to the Batgirls that grabs my attention… which isn’t easy to do when it comes to these characters since they’ve never been especially high on my radar. There’s something to that interplay of Cass’s strong silent stoicism and Stephanie’s more energetic and approachable energy that makes the story sparkle. Not to mention the Corona and Stern art team has worked some magic as far as giving the story a distinct and impactful visual identity; I couldn’t be happier to see that Corona is remaining with the team as it transitions into an ongoing series next month.

This penultimate chapter of Fear State makes the first moves toward bringing the various threads that have populated Fear State, as well as Tynion’s run generally, together. It’s difficult to say how successfully the weave will be woven before the final chapter, but for the moment I can’t wait to see how the fates of these characters, and this city, are resolved... and what the road set out before them will look like going forward.

Batgirls is exciting, touching and intriguing with a unique voice and a look that stands out with rich colors and dynamic character work. I can’t wait for the ongoing.

Batman #116: Past the Breaking Point!