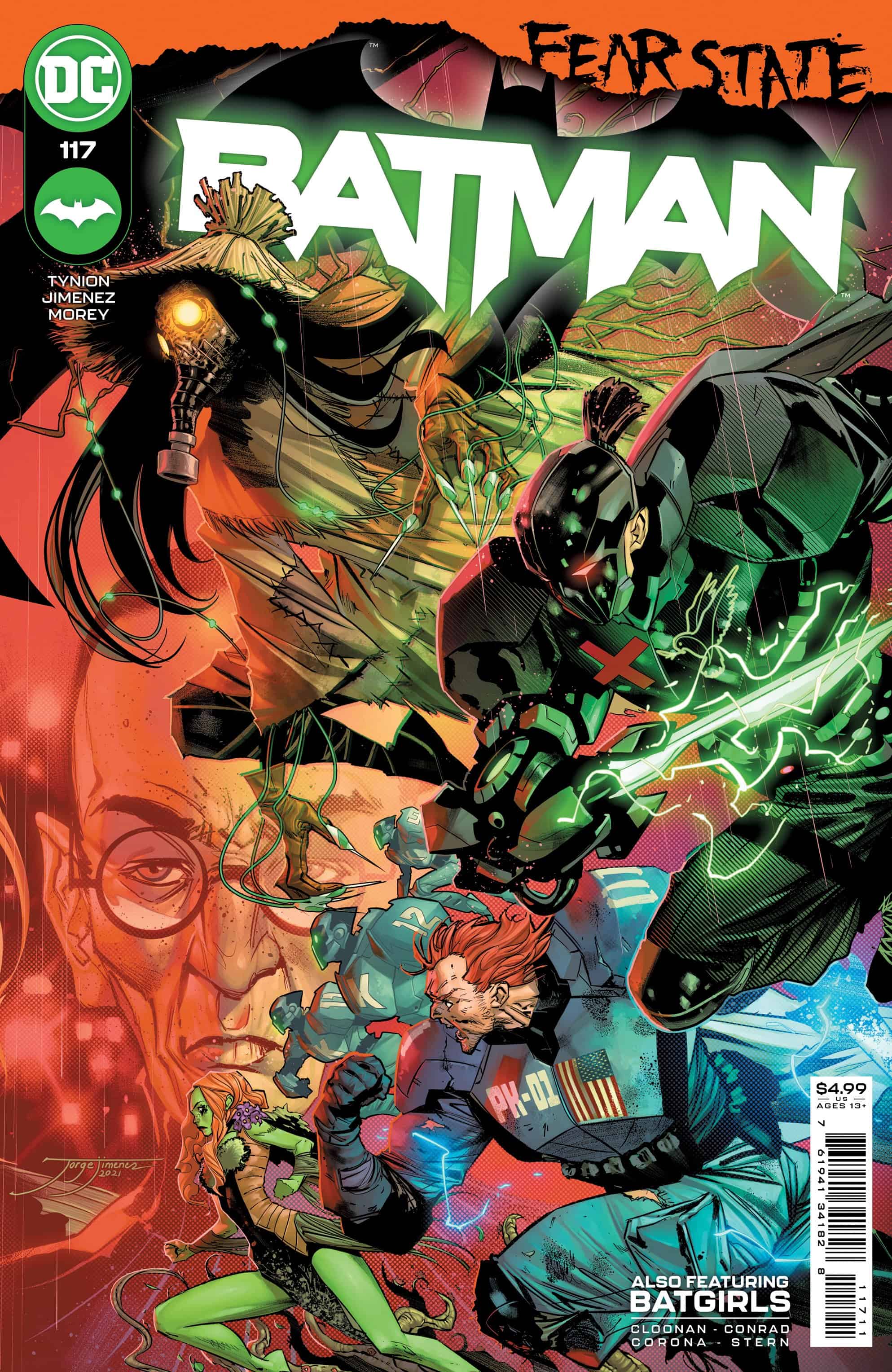 As Simon Saint struggles to maintain some scrap of control over Gotham City, Batman Peacekeeper-01 is in a battle to decide the future state of Gotham City. Elsewhere, a pivotal confrontation between Miracle Molly and Scarecrow could have dire ramifications and, in Eden, Queen Ivy must decide where her future lies, and what that means for her troubled home.

In “Batgirls” Part 3. Stephanie and Cass are in hiding after the fall of the Clocktower with orders to lay low for a while. Of course, “laying low” is relative given that it’s them – with dangerous consequences.

Nearly two years after his arrival on the Batman title with issue 86, we have arrived at the final issue of Tynion’s Batman run, as well as the ending notes of the Fear State event. Of course, as is the case with many things in modern the comic industry, the end is not quite the end since there’s still the Fear State Omega issue in a few weeks to close up some loose ends and set the Batcorner of the DCU onto its next new direction. That said, this issue does close off most of the major plot threads, answer questions, and effectively set up the setup for the next run, which starts next issue.

So! When last we met, Simon Saint was mid some kind of existential crisis resulting from his accidentally getting his assistant killed while trying to subdue a fear toxin-afflicted Sean “Peacekeeper-01” Mahoney. Speaking of Mahoney, he stumbled around in an unstable state until Scarecrow found him and tried to push him past the breaking point, trying to prove Crane’s Fear State hypothesis. This resulted in Mahoney shooting Crane, who was barely clinging to life as Batman confronted Mahoney and Miracle Molly worked to prevent Crane from using Unsanity Collective equipment to inflict mass trauma on Gotham as a whole. Meanwhile, Harley Quinn and Bella “The Gardener” Garten arrived in Queen Ivy’s Eden hoping to reunite her with her “other self” and prevent her from pulling Gotham down around them.

Now we open with Saint Industries’ employees visibly shaken as Simon Saint continues to lose control of himself even as he loses control of the situation. He’s really in full narcissistic control freak collapse here, unable to even pretend to respect the institutions and elected officials that put him into power in the first place or process the reality that sometimes money can’t buy you the outcomes you desire.

The continued battle between Batman and Peacekeeper-01 is evidence of this too; despite the money and technology that went into his power suit, despite his raw power advantage, Mahoney is unable to score the quick victory he expected. It’s a little surprising at this point that anyone underestimates Batman to the extent that people always do – I realize he’s “just a man,” but this man is a Justice League member. Batman is the quintessential human who stands as equal with the gods, and it would probably do his enemies well to remember that when planning on how to deal with him.

I’ve said in the past because Tynion has said in the past, that Fear State is the pivot point on which Gotham either does or does not become the fascist state depicted in Future State… and in this issue, we do get the answer to that question. I’m not going to go into it in-depth or spoil it, but the decision is made through the tapestry woven by three story threads. Batman vs. Peacemaker-01 is first.

The second is Miracle Molly and Scarecrow. Crane may have been shot last issue, but he’s still alive and still talking… and as is to be expected from a psychiatrist-turned-manipulative supervillain, he uses his understanding of Molly’s beliefs, and the ideology the Unsanity Collective embodies, to manipulate her.

Third, there is Queen Ivy, currently on the verge of becoming another great catastrophe for the city in her rage. All that stands between her and an irredeemable act of destruction is her decision to accept or reject the best part of herself, currently a literal second half brought into Eden by her former flames Harley Quinn and Bella Garten.

It is through the tapestry formed by these threads that we see what Fear State is truly about: the choice between cynicism and hope, and the fragility of the latter when facing the inevitable onslaught of pain the world will always bring to bear. Toward the end of the issue, there is a scene – you’ll know it when you see it – that, to me, embodies Batman. It is the reason he’s a hero instead of an antihero and it’s the reason he doesn’t kill. While I have sometimes felt Tynion’s writing in the past few issues was a bit too on the nose, here the direct approach – simple and honest – works… and it leaves me thinking, yes, that’s my Batman.

That’s probably why I’ve always loved this run, despite it being in some ways the opposite of what I would have said I’d want to see in a Batman run: I have preferences in directions, but no real dealbreakers as long as I feel like a creator understands Bruce himself, and Tynion absolutely does. From there the situations he puts Bruce into, the relationships Bruce forms and enemies he takes on, and things like street-level vs. epic superhero… it’s all just gravy.

So, here’s where I am with Fear State as it stands right now, assuming nothing wild happens in Fear State Omega.

I think in some ways it contained too many ideas. Most notably, the Ivy story deserved its own arc and you could argue that the Scarecrow and Magistrate arcs deserved individual arcs as well. It sometimes felt to me as though Tynion tried to push through everything he’d wanted to say about these characters in a rush at the end of his run… which may be the case. Tynion originally intended to stay on this for several years more, until the Substack deal came along. Since many of the things paid off in Fear State (e.g. Queen Ivy, the Magistrate, etc) were teased before the offer was made, perhaps he wanted to tie up the threads he’d opened and leave a clean slate (more or less) for Josh Williamson.

Regardless of the reason, the story did feel a bit overcrowded with ideas for me. That said, it was also exciting, bombastic, and it what it wanted to do: tie up the loose ends, set several of Tynion’s newer creations onto the path they will be walking in the future, and do it while providing Scarecrow with a top tier event, something he has been sorely lacking. I’m not sure this will elevate him on its own – it’s a bit too much the Magistrate’s story, and even Ivy’s story, to propel him to A list status alone, but it has positioned him well for evolution into a true top tier villain if that’s what future creators want to do with him. It also set the classic characters on a new trajectory that should be fascinating to watch unfold in the months and years to come. I am very curious as to how we get from this to Bruce leaving Gotham, but I’ll leave that for Fear State Omega to explain.

Jorge Jimenez is back in rare form this issue, and I can only assume the reason for the guest artist and slightly less intricate work from Issue 116 was to give him the time and opportunity to go all-in with the finale. If so, it was worth it; Jimenez knocks it out of the park with page after page of his signature mix of western comic, manga and animation styles, all rendered with a lush detail that nonetheless does not blunt the edges. Watching Batman fight PeaceKeeper-01 is almost uncomfortable, but in the best possible way – the blows can almost be felt through the pages. My only real complaint is… well I’m not especially in love with one of the Ivy designs in the issue. But that’s a minor complaint, and did nothing to tarnish my enjoyment overall.

Now, moving to the backup story – Batgirls Part 3 is a semi-calm moment in the storm that has been Fear State. Stephanie and Cassandra, framed for murder, are under orders from Barbara to lay low at a local hotel – and not to go outside, lest their position be revealed. Stephanie being something of a free spirit, however, begins a minor (honestly pretty minuscule) transgression that threatens to escalate into a much more dangerous situation. How will it turn out… well, as with many of the recent backups, this is a bridge into the highly anticipated Batgirls series, so you’ll have to wait a little longer to find out.

One interesting thing about Batgirls, visually – the color palette reminds me very strongly of the better done Future State Batbooks. It’s a look that strongly resonated with me back then, and it continues to hit me in the heart now.

Honestly, the only problem with all these backups is that they always end up making me add titles to my reading list. Which admittedly is only a problem from the perspective of my wallet, so good job, I guess.

Fear State comes to a close with a bang, reminding us of who Bruce Wayne is and what Gotham is, for better or worse. Probably better in this case. It’s an effective closing to a crossover event that was sometimes a little chaotic for my tastes but always managed to entertain in the end. I’m going to miss Tynion terribly, though I am also extremely excited for Joshua Williamson.

I won’t miss Batgirls, though, because now that I’ve gotten a taste of the narrative and visual style in store, I will definitely be following the title when it comes out.