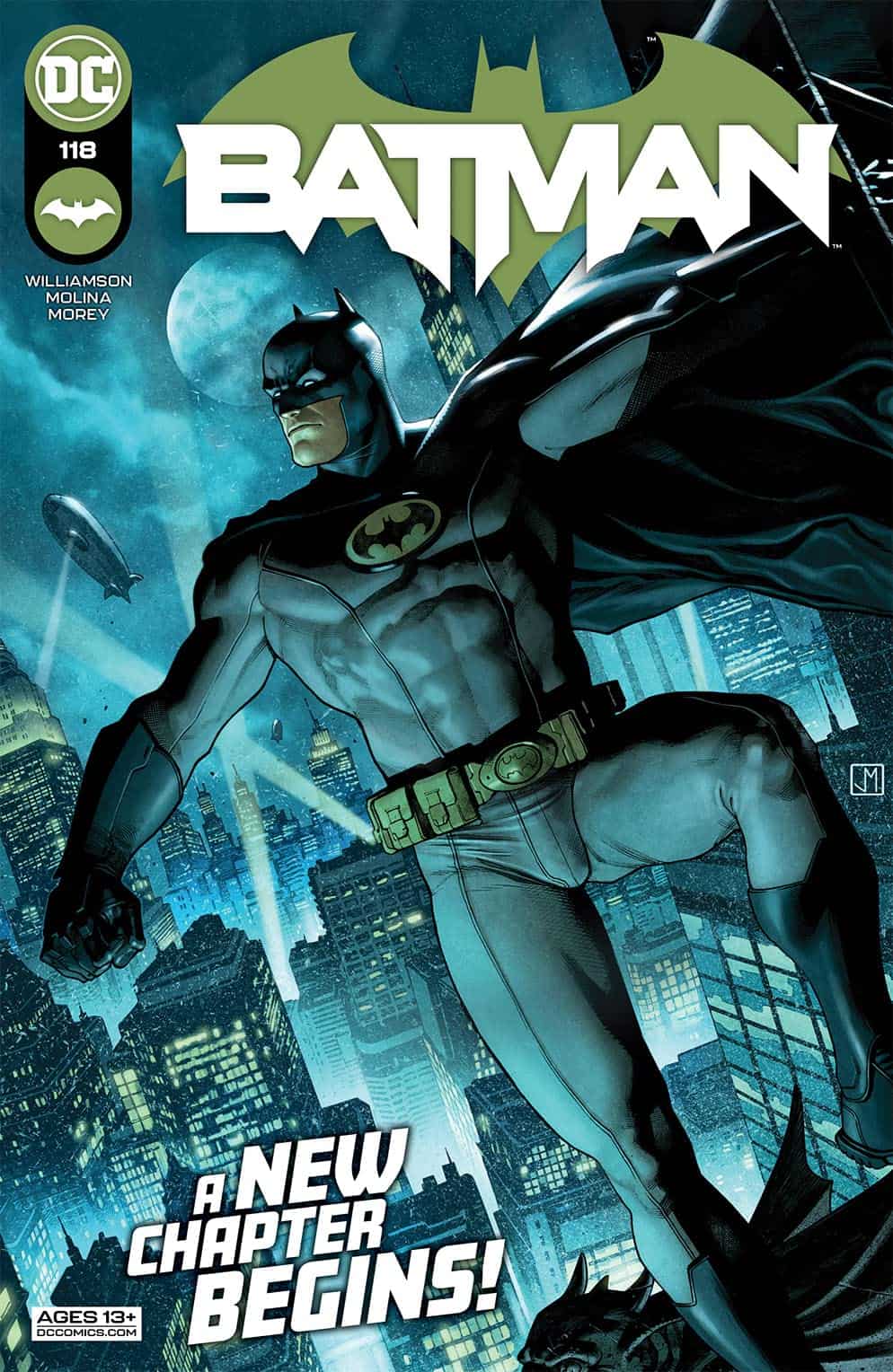 It’s the first issue of a new team and things are getting off to a great start as the city celebrates the fall of the Magistrate. Now recognized as the hero he is once again, Batman nonetheless finds himself slightly off-center with the city he loves – not least because of things like the BatVillain-themed billionaires gala he finds himself forced to “attend.” Maybe he needs a little time away from home? Not-so-fortunately, life is about to hand him the perfect excuse to take a trip.

Well, here we are! A new era begins for Batman with the arrival of new writer Joshua Williamson, here joined by Jorge Molina and Mikel Janin.

Going into Batman #118, I wasn’t entirely certain of what to expect. I have immense respect for Williamson’s work – most recently both Infinite Frontier and the ongoing Robin series have taken my heart by storm. In fact, back when James Tynion IV announced his departure, Williamson was on the shortlist of writers I was desperately hoping would get his chance on the flagship Batbook.

That said, there’s always a little anxiety – the best kind, mind you – around a change in the creative team on a beloved character. Whether you loved or hated the previous team, ch-ch-ch-change is coming, and regardless of how you feel about the team coming in, you can’t be sure whether their vision for these characters that mean so much to readers and fans will be something you can get on board with.

As of right now, my fan-fueled anxieties are more or less quieted down, with one glaring concern remaining… which I will get to later.

Appropriately for having just settled into a new status quo both inworld and on a meta-level, Batman #118 has that kind of fresh coat of paint feel that you want in a new beginning, while also feeling in some ways like a return to form. Tynion’s run was a little unusual, having focused heavily on new characters and new mythology, and pushing the Batman mythos toward a more modern – even futuristic – place rather than the traditional gothic horror look we’re all used to.

Perhaps most importantly for comparison, though, Tynion’s Batman was essentially a nonstop action-horror book, with most of the street-level, detective-angled stuff and the personal day-to-day of being Bruce Wayne left to Detective Comics. For me, this split worked – Batman was the plot-driver of the line after all, and it wasn’t as though the other parts of Bruce’s life were being neglected, they were just relegated to Detective Comics instead. However, as much as it didn’t bother me personally, it’s been near impossible to overlook the fact that many readers missed having that detective focus and the quieter moments in the book.

This brings us here, to the opening pages of Batman #118. The city is celebrating – people are dancing in the streets, and there are fireworks in the sky. Over this jubilant scene, the “voice” of two men frames the reason for the excitement in the air: the madness of the Magistrate has fallen, long live the more mundane madness of life in a crime-ridden city. That last bit is important because as it turns out, our narrators are two petty criminals wandering the streets, ready to break into a pawn shop – another day, another crime. Sure there’s a shadow on the rooftop, but it can only be one of the city’s famed gargoyles. Given how busy he is with major threats – corrupt organizations and supervillains – you wouldn’t expect to see Batman looking to dust it up in back-alleys now, right? …right?

It’s a classic moment and a tone-setter. Immediately we can understand Williamson’s Batman – despite the over-the-top threats he has been known for confronting in recent years, he is no less willing to confront petty criminals breaking into a single independent store now than he ever was. In the same way, however, we also understand how he fits into Gotham: of course, your average burglar wouldn’t expect him to bother with them, right? He’s out there fighting gods and monsters. He’s toppling fascist regimes. What would he be doing standing on the roof overlooking some store?

His relationship with Gotham has changed. He is no longer the man on the streets, the vigilante on the ground. He has saved Gotham, but it isn’t quite clear yet what his role in the city should be. Throughout the issue, Williamson builds on this feeling. He pursues mercenaries to a Billionaire’s Ball themed after Gotham Villains – his former colleagues turning the real horrors of Gotham into their playground – and is asked for an autograph by a little girl dressed as Punchline. That’s not to say that Gotham is celebrating its darker element of course – in fact, it’s celebrating Batman himself, but that’s a little uncomfortable for him, too. Later, when asked what he does after a big win, all he can think of is a parade of the people he’s lost, the relationships that have ended.

The question is if the roles and comforts of his past are no longer available to him, what does he do now?

Unsurprisingly, an answer begins to present itself pretty quickly… but I’m going to leave that unsaid.

When it came out that Bruce would be leaving Gotham for a while, I was of two minds about it. On one hand, it’s been so long since the main Batman title left Gotham for an extended time that I admittedly find it a little relieving. Time to see Bruce Bond it up for a while and do some traveling, as far as I’m concerned. On the other hand, in recent decades Batman’s relationship with Gotham has become so intense and unshakeable that I had a difficult time imagining what would make him do that.

As of now, I’m sold – it isn’t just about the issue that arises and draws him out of the city, it’s also about not quite knowing how to fit into that city any longer. I don’t expect that to last forever – at the end of the day, Gotham is his truest love, and this will always be true. But as a temporary state it makes sense and works well as a contributing factor to his decision.

Based on this issue alone, which is to say on very little information but bear with me here, I expect Williamson’s Batman to veer a little closer to the classic vigilante and detective role than we’ve had for a while now. I also expect to see a more rounded take on Bruce himself, perhaps including more of his quieter moments and his civilian life when appropriate – something that is arguably necessary with Detective Comics having been repurposed away from being a second Bruce title.

Anyway, I’m not going to pretend that one issue is a lot to go on, but I’m feeling great after reading it, so I think it’s fine to be optimistic.

Artistically, Batman continues to be beautiful overall. My understanding is that Jorge Jimenez will be back next arc, whether permanently, temporarily or on a rotating basis I have no idea, but for the moment I’m feeling no pain from Jorge Molina and Mikel Janin here. Their work is more realistic than Jimenez’s more stylized, animation-adjacent style but no less beautiful for that difference. The double-page spread of Gotham’s billionaires dressed up like Batvillains is just fantastic – I could stare for hours at all the little interactions, the different body types and body language, the little details that differentiate each costume from the others even if they’re ostensibly “wearing” the same era. It’s beautiful.

That beauty and attention to detail, however, just added to my disappointment at what seems to me to be a just… startlingly caricatured Asian man toward the end of the book. It’s only one panel, only one moment, but it made my brain skip and threw me right out of the story. Because, the thing is, every other character in this book – even tiny background characters in a villain-themed party, is designed as a complete human being with their own unique costume and body type… and then out of nowhere there’s this incredibly offensive Asian caricature looking like it rolled out of a 1940s propaganda pamphlet or something and it’s just. Disappointing, and really I wish DC would be more careful with its portrayal of Asian people as a whole.

I’m not sure what else to say about this beyond that I’m irritated that it was drawn and more irritated that no one stopped it from being published as-is. To see it for yourself, look for a bunch of bananas, and then look down.

So, that’s it – that’s the concern nagging at me. It didn’t ruin my enjoyment of the book, but it did sour the ending for me after I spent the previous pages floating on an excitement high, so I suppose it’s appropriate that I’m ending on a sour note after 1,000 words of positivity.

Batman #118 is a fantastic start to a new era for Batman, likely to appeal to fans both new and old. Batman himself is well-characterized, with a portrayal that veers more toward the classic detective model than the action-horror hero of the previous run, but without a jarring tonal shift that might be off-putting for current readers. The artwork is beautiful, but honestly, I’m not sure I’ll ever be able to get past that one page without wincing.