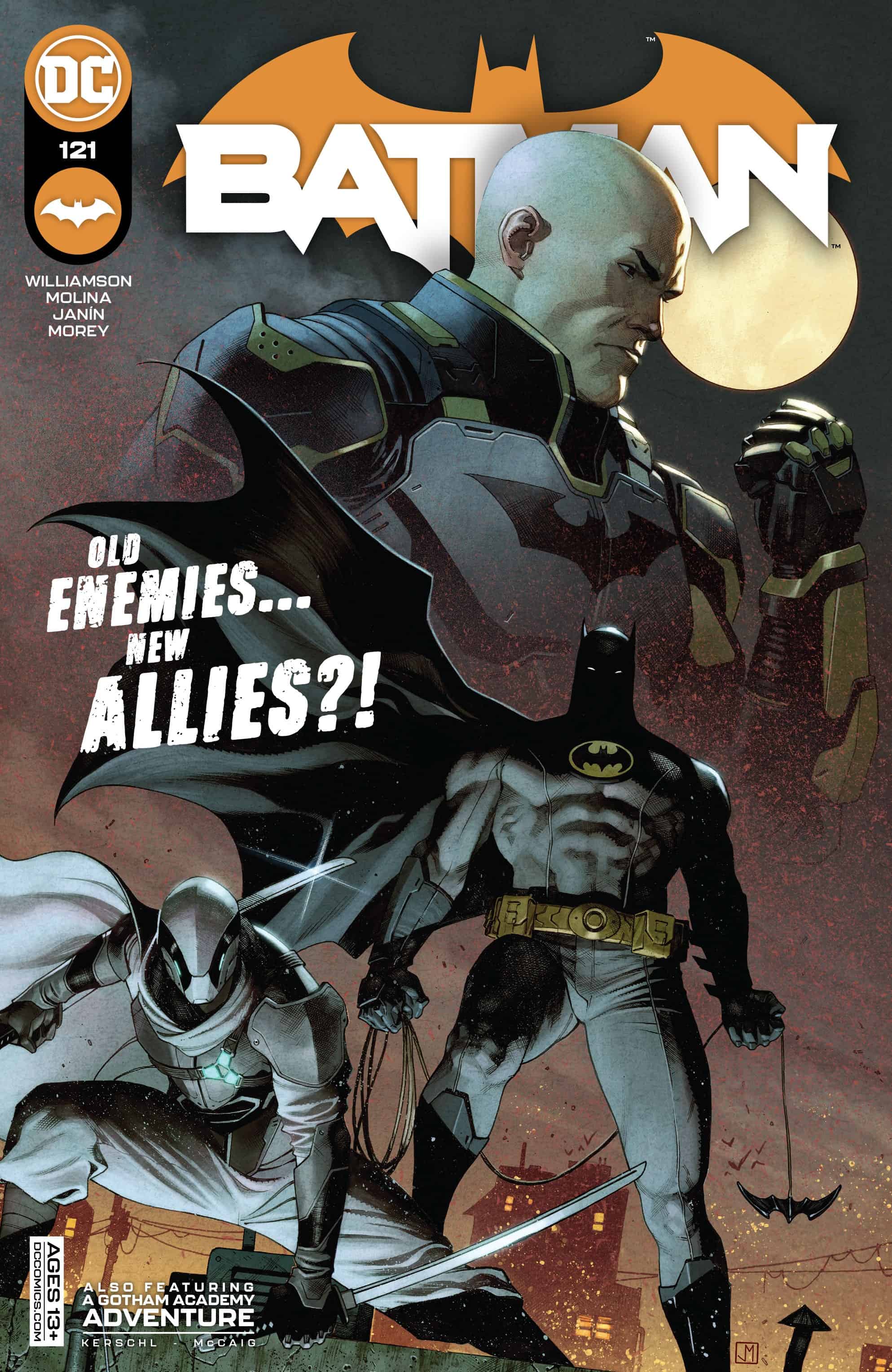 The final act of Abyss is upon us! Batman and Lex Luthor join forces to face down with Abyss and Batman Incorporated... which is about as crazy a concept as it sounds on the face of it. The questions of the day are simple: who is Abyss, what drives them, and how can he be stopped from executing Lex Luthor right in front of Batman?

And in the Maps Mizoguchi backup, Maps and Batman face down with a nest of kappa... but even if they manage to contain that threat, there is another still lurking.

When we first enter Batman #121, we are mid-showdown. On one side, we have Batman and Lex Luthor, both currently bat-suited up and prepared… though Batman is currently suffering from Abyss-inflicted blindness. On the other, there is mysterious new villain Abyss, and the members of Batman Incorporated – former allies of Batman who joined forces first with Luthor and then with Abyss.

As it turns out, Abyss’s primary goal is executing Luthor. Frankly, given Luthor’s personality, it’s difficult to blame him. Still, Batman isn’t inclined to let anyone be killed right in front of him, and so the contest begins.

Depending on your perspective, Batman Inc.’s turn to the dark side could be Batman’s fault for having largely withdrawn from the team in recent years. Still, if it seems unusual for a group of heroes to have allied with one supervillain and then another, hold onto your pants because Joshua Williamson, Jorge Molina, and Mikel Janin have answers for you, and those answers lead to a dramatic plot turn that sets us up to rush into the final act of this four-part arc.

I had mentioned before that I wondered how well one could pull all the threads together to create a satisfying conclusion for Abyss’s story, specifically since the arc that bears his name is more focused on Luthor and Batman. In the end, it’s a bit of a mixed bag. Thankfully, we do learn more about Abyss’s origins and what drives him (him?). The answers are not what one might expect, and in the end, I felt that Abyss is perhaps less of a true villain than one of Luthor’s victims. Still, it isn’t clear what created the situation that motivates Abyss to begin with so the answers, while appreciated, do feel somewhat incomplete. This may be a setup for Abyss to be a recurring villain, though I wonder how likely that is with Joshua Williamson stepping down as bat-scribe so soon.

Left with a similar setup (in spirit if not in specifics) is Detective Cayha, who has been Batman’s guide and partner in Badhinisia. I’ve found her a little too well-developed for a one-off character, so I was relieved to find that her story ends with a one-two punch of teasers that could lead to her becoming a more long-term addition to the Bat-mythos.

In fact, you could call the final few pages of the lead feature a rush of teases, big and small, including a clue as to the future role of Batman Incorporated – and who may be positioned to lead it going forward – and a bridge into the upcoming Shadow War event, which begins at the end of this month.

All told this has been an enjoyable, and self-contained, Batman arc, which is refreshing after years of a more soap-operatic format of ongoing plots leading into one another… not to mention it gives the reader a moment to ramp up their excitement for the upcoming crossover, and the changes to come in their wake. It also provides an excellent bridge between the past and the future, leaving Batman in a more balanced place than he began, which is always welcome.

The artwork by Molina and Janin is stunning as it always is, with Molina making excellent use of Batman’s classic silhouette culminating in a classic Batman-on-a-gargoyle shot that’s up there with the best of them.

Finally, we come to the last installment of the charming Maps backup that has been sparkling its way through my heart in recent months. When we left them off, Batman and Maps had encountered first a minor army of Japanese youkai called Kappa and then a missing girl – and schoolfriend of Maps – who had seemingly been taken (or killed?) by them.

As it turns out that girl, Lindsay, is not dead. However, she does have deeper connections to the kappa than had previously been suspected… and even when the case is resolved, that connection leads both Maps and Batman into potentially dangerous territory once again.

This has truly been one of my favorite backup stories to date and something of a revelation for me given that I had not previously been familiar with these characters or this corner of the Bat-world. I wouldn’t mind seeing more of it.

As a finale issue for both the lead and backup features, Batman #121 delivers satisfying resolution without closing the door on the return of these characters. Better than that, it situates the characters for future adventures, and I’m excited to see them when they come.

In the meantime, roll on Shadow War!