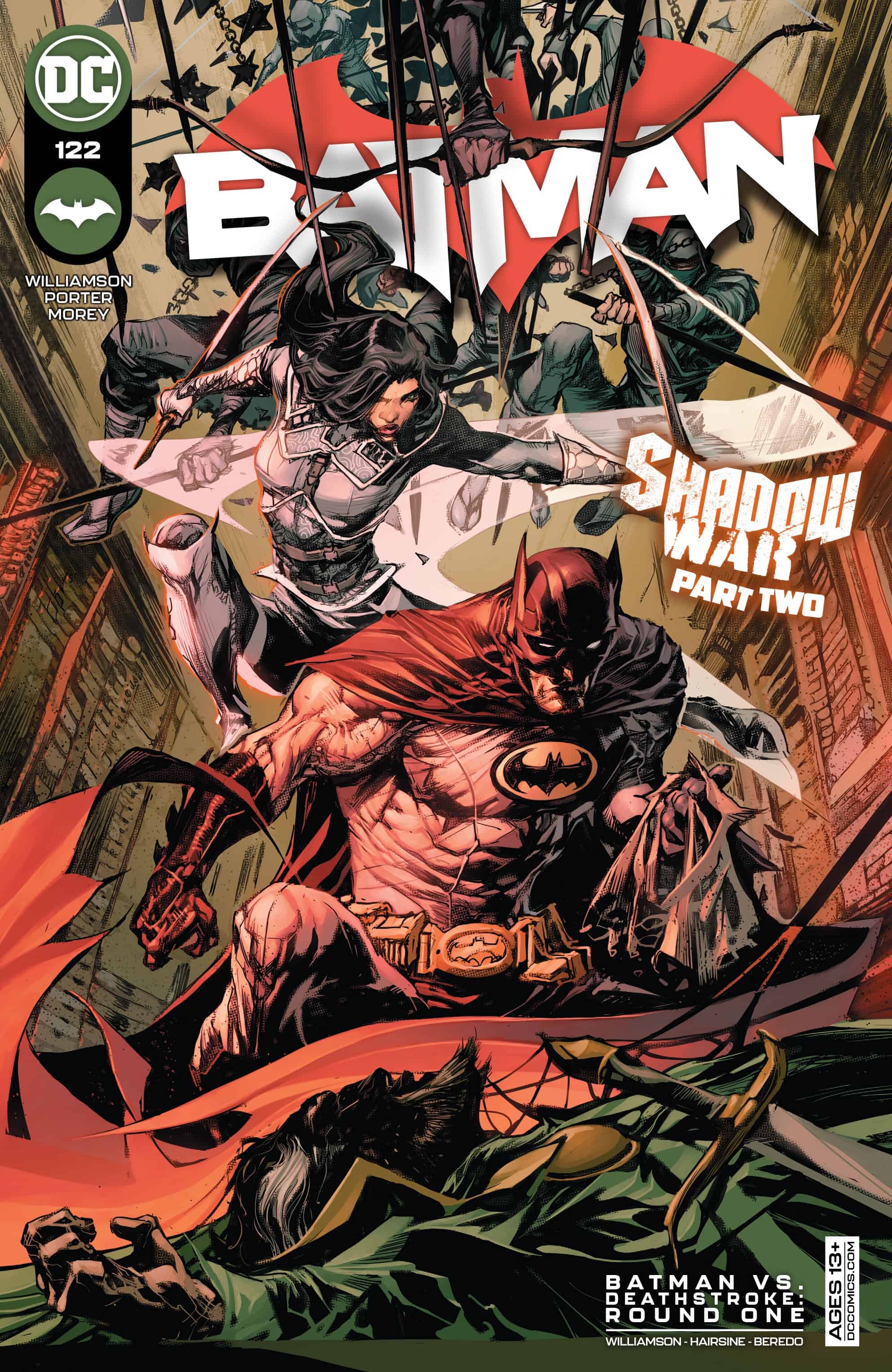 The death of criminal mastermind Ra’s al Ghul has triggered a war between Deathstroke and Talia al Ghul with both of their personal armies getting involved and causing plenty of chaos. Given that Talia is Batman’s former love, and the mother of his son Damian, this inevitably ends up drawing Batman into the crossfire. The only problem is, Deathstroke isn’t actually responsible for Ra’s’ death, which leaves an obvious open question: who wanted Ra’s al Ghul dead, and why frame Deathstroke to do it?

The past twenty years or so have been difficult for fans of the classic Batman rogue family known collectively as the al Ghuls. This is a review and not an article about the deterioration of their characterization, so I’m going to resist the urge to complain in-depth about this, but suffice to say these characters have been Through It, with both Ra’s al Ghul himself and his morally complicated daughter, Talia, mutually devolving into eugenics obsessed monsters driven by their lust for power and little else.

This is why “Shadow War” has filled me, personally, with a mix of dread and anticipation ever since it began to be foreshadowed months ago. There were reasons to be hopeful – Joshua Williamson had written Ra’s al Ghul some years back in Batman/Superman and done so masterfully. His appearance in Robin #4 was also fantastic, though the intent with Talia has been more difficult to read… not least because her character has taken the heaviest hits between the two.

I started to feel better around Robin #12. Then came Shadow War Alpha, which left me intrigued and mildly optimistic. And that… brings us here, to Batman #122.

So, okay, to slightly recap – in recent months we’ve seen the Lazarus Pit exposed as a cursed power linked to some kind of world-threatening demon. In Robin #12, it was also reaffirmed that the pits are corruptive forces and the people  who make use of them tend to “come back wrong.” We have also found out that Ra’s himself is no longer able to use the pits – a change that corresponds to his recent shift in personality, which I doubt is a coincidence. However, we’ll need to wait to find out for certain since Ra’s was then executed, in mid-peaceloveandbrotherhood advocation speech, by Slade Wilson – more famously called Deathstroke. Ra’s’ death left Talia al Ghul and Damian, recently reconciled with both Ra’s and with one another, on the warpath.

That vengeance began to take form last week, with Talia stepping into her role as the League of Shadows leader and declaring a blood hunt on Slade. It is here that we begin to see the true effects of that call for Slade’s head as the full force of the League comes down on him, tearing through Deathstroke’s team like a knife through tissue paper – an impressive showing, particularly after years of mostly impotent flailing.

There’s only one problem. Unbeknownst to most everyone save the reader and Slade himself, it was not Slade who assassinated R’as. It was, instead, someone wearing an old Deathstroke suit. This raises the question of who would have murdered Ra’s and (more curiously considering Ra’s’ list of enemies) why they would frame Deathstroke while doing it.

Talia is the elephant in the room. As the heir to the al Ghul legacy, and given how ruthless she has been in recent years, she seems the most obvious candidate – particularly given that Ra’s was in the midst of turning both himself and Talia in to the authorities when he was killed. Even Batman suspects her at first, leading to a confrontation in Nepal that will give fans of the classic Batman-Talia dynamic a great deal to think about for the weeks between now and the next chapter of Shadow War in late April.

Meanwhile, Damian is just as upset about his grandfather’s execution as Talia. More than that, after a misspeak on Bruce’s part, he’s back on the outs with his father – not that he ever wasn’t. That being the case, he goes in search of an ally to take on Deathstroke.

…I’m generally exhausted by crossovers, and some things are bound to draw controversy, but thus far this story is off to a great start. That doesn’t necessarily mean it will continue to be great – and even if it does, that doesn’t mean I won’t burn out on following it – but I want to believe. Maybe it’s because I’m already biased in favor of any story that tries to repair some of the missteps taken with the al Ghuls. Maybe it’s because of the callback to classic O’Neil and Adams era stories in the tone and rhythm of Batman’s interactions with Talia and the League. Whatever the reason, so far I am enjoying “Shadow War” more than I’d expected, or even hoped.

I’ve had a tumultuous relationship with Howard Porter’s artwork – sometimes I enjoy it and sometimes I don’t. I should look into whether it’s the subject matter or the inkers and color artists that make the difference. That said, he is in top form this issue with highly detailed and slightly stylized artwork that suits the subject matter beautifully. Something in the linework reminds me a bit of Don Newton, one of my absolute favorite artists from the Bronze Age. That’s not to say that the work is derivative at all – Porter has a style all his own, with a baroque quality to it that lends majesty and scale to the scenes in Nepal.

There’s a certain poetry to having him on this issue, given that he was also the artist on the “Tower of Babel” story in the late ’90s which was perhaps the last big story of the classic al Ghul era.

As usual, Morey’s phenomenal color work elevates the material. The meeting between Batman and Talia is particularly beautiful, with the interiors of the League’s headquarters providing a kind of warmth in greens and golds in stark contrast to the blue and white outside the massive windows.

It’s just a great start to what could be a really exciting event, and I am thoroughly looking forward to whatever comes next… despite a bit of experience-induced nervousness about where these often misused characters may land.

Our backup for this issue is also by Joshua Williamson, this time in concert with Trevor Hairsine. Here, we take a trip back in time to the first encounter between Batman and Deathstroke. The latter seems to have accepted a contract to kill Robin – in this case, Robin #1, Dick Grayson. I’m fairly sure this is a retcon to their initial meeting, and probably one that will frustrate the “Deathstroke isn’t a Batman villain” crowd (who I am not knocking, by the way – I think of him as a Titans villain first and foremost, myself).

It’s too early to tell how well the story as a whole will land with me, but so far it seems interesting, and of course, it is beautifully drawn. Hairsine’s style reminds me very much of artists like Neal Adams – naturalistic and yet still comic book-style enhanced. His Batman is lean with an athlete’s body instead of the most recent body builder-style takes.

My only real complaint is the increasingly prevalent view that Robin wears bright colors because Batman likes using children to draw fire. I get it, it’s unrealistic, but honestly, it’s not dissimilar to the whole concept of a child sidekick in itself: it’s just not something I think needs to be explained, realistic or not. Explaining it just draws attention to something I’d frankly rather they didn’t examine too closely because any explanation just makes it look worse and ultimately it’s just a comic book conceit that these things happen.

Of course, that suggestion did come from Deathstroke so hopefully it’s just Slade’s cynicism speaking.

Anyway, great issue, but with the unfortunate side effect that I’m now angry about the two-week gap between Batman #122 and Deathstroke Inc. #8…!

Experience tells me it’s a bad idea to get my hopes up, but this could be the event I’ve been wanting to see for nearly 20 years.