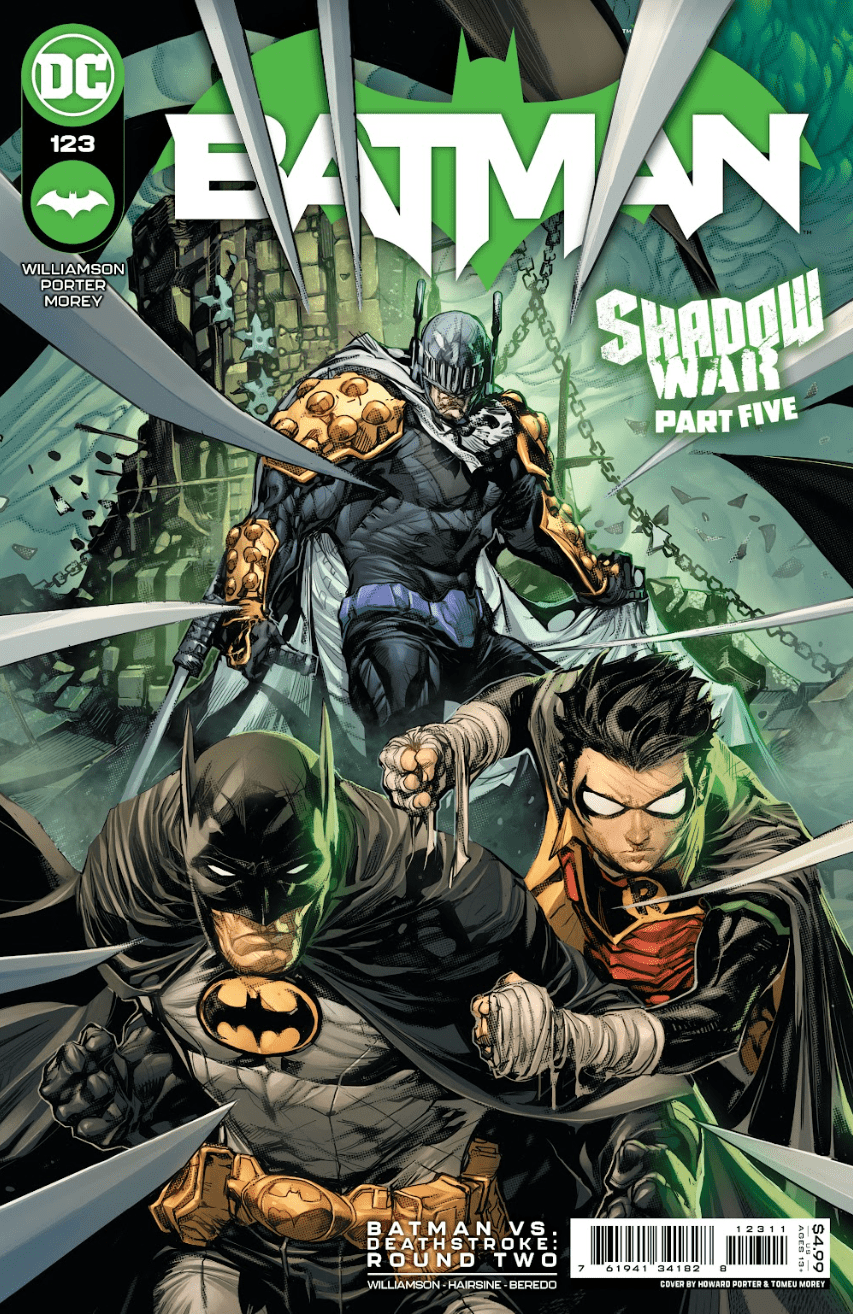 Batman and Robin are finally reunited! Together they will hunt for the truth behind the death of Ra’s al Ghul! But then who is left to defend the Secret Society against the League of Shadows? Deathstroke’s fight against the Demon’s Shadow ends with a shocking cliffhanger! Plus, what happens when you get Deathstroke infected with Joker toxin? Find out in the epic backup story!

DC’s “Shadow War” crossover has entered the pages of Batman for the second time in issue #123.  The story by Joshua Williamson has moved at a breakneck pace, pitting Talia al Ghul against Deathstroke with Batman in the crossfire.  Batman #123 desperately needed to answer some major plot questions or the wider event will begin to drag.  Who really shot Ra’s? And what do they want with Deathstroke?  The antihero sought to find that out with his children in tow, while Batman did much of the same with Robin.

To start the issue the latter party leaned on one of the flunkies that posed as Deathstroke back in Justice League #68.  The goon was conveniently talkative, some might say to an expositional extent, leading the Caped Crusader, once again working in tandem with Robin, to Central City.  Sloppy mistakes from Batman lead to hilarity before the Dynamic Duo finally meets the phony Deathstroke face-to-face.  Readers, it seems, will need to wait longer for that privilege.

Elsewhere, Deathstroke sought his own leads about his framing with Respawn and Ravager at the scene of the crime.  When the group is found out by the Demon’s hand, they are pulled into a violent melee.  The outcome of that brawl leaves the assassin enraged and the readers expecting carnage in Deathstroke Inc. #9.

This issue is fraught with the same mischaracterizations that have plagued “Shadow War” to this point.  Williamson is well into his story, of which he alone has writing credits, and only now has waited this long for Batman or Deathstroke to ask who is pulling the strings.  For any longtime fans of the World’s Deadliest Assassin and the Dark Knight, seeing the duo so flummoxed does not sit right.  While Deathstroke has at the very least been on the run, Batman has simply been behind the curve in a way that does not fit the character.  Talia al Ghul, meanwhile, goes from pragmatic femme fatale to single-minded warmonger.  Only Damien Wayne seems to have a voice consistent with his usual writing, but perhaps that is because everyone in “Shadow War” is acting like a child.

Where art is often the saving grace of this sort of floundering storyline, in “Shadow War,” it is part of the problem.  Howard Porter is Williamson’s latest artistic collaborator and continues a trend of scratchy pencils.  That style of art has its place in comics (just ask Chris Bachalo), but feels out of place in any Batman title, especially given that DC has so many great options who opt for a slightly more legible look. Worse yet, no artist has had two or more issues in this crossover, adding a disjointed aesthetic to already lackluster scripts.

Things do not get much better in “Batman Versus Deathstroke,” issue #123’s backup story.  Deathstroke is out for blood after a double-cross from his contractor, the Joker.  Batman is cast in what has become an all too familiar role, having to justify defending his arch-nemesis.  The story, also by Williamson, is too generic to be memorable.  Trevor Hairsine has a unique art style that somewhat reminds of Greg Land’s. Nine pages will not be enough for most readers to warm to it.

Williamson will need to pull a rabbit out of his hat to save Shadow War from mediocrity.  The shock ending to this issue is almost certainly a bluff, leaving the identity of Deathstroke’s tormentor the author’s last narrative card to play.  Williamson’s status as one of DC’s go-to writers makes his dud here all the more disappointing, and he needs to work fast to justify this multi-book crossover’s existence.