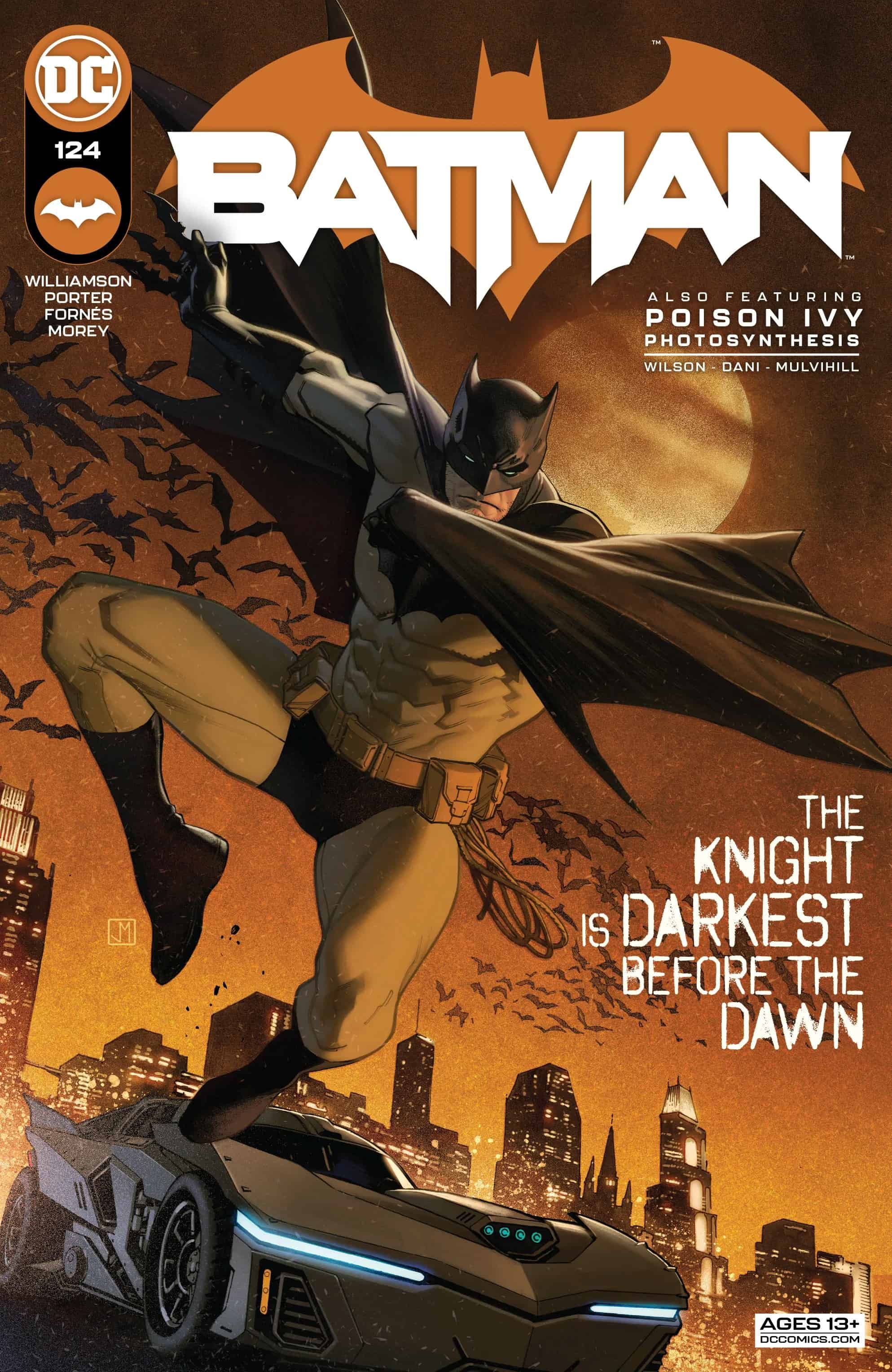 Abyss is up to his old tricks, tormenting the underground of Badhnisia... or is he? Batman returns to the site of his first encounter with Lex Luthor’s rogue Batman substitute to tie up loose ends and pay off a few old promises – to the reader, that is.

And in our backup for the month, Poison Ivy finds herself quickly losing her connection to the Green... and her powers along with it.

It’s the final issue of Joshua Williamson’s short and spicy term on Batman! Appropriately, he circles back to the first arc, Abyss, with an epilogue to put a bow on some of the ideas and characters that debuted there.

But first, Bruce receives a quick rundown of the current status quo: despite having turned herself in to the DEO, Talia al Ghul has gone under the radar, along with Damian. Ghost-Maker and Clownhunter, on the other hand, have settled into their new roles within Batman Incorporated and are currently tracking down Luthor’s substitute Batmen (see: the 2022 Batman annual for more details on that).

Appropriately, one of those rogue substitutes, Abyss, has been spotted on Badhnisian streets again and while Oracle does suggest sending Batman Incorporated, it’s too late – Batman has already arrived in Badhnisia, looking to tie up some loose ends. Of course, this would be boring if everything turned out to be exactly what it appears to be, so you can expect a twist along the way, which I will not be spoiling here.

For safer ground, we turn to Detective Cayha, the officer who allied with Batman during his first visit. At the time I talked a bit about how interesting she seemed to be, and how the storyline seemed to set her up for a potentially larger role or at least a return engagement. This issue delivers on that promise with a look into her background and what motivates her as she seeks to solve the central mystery of her life: what happened to her parents, Joy and June Cayha, who disappeared while organizing protests against governmental corruption.

Of course, her anguish – and desire for revenge – resonate with Bruce. The question becomes, will she fall to her anger, or will she rise above it? The answer, regardless of what she does, has farther-reaching consequences for her than just the effects of the moment.

Honestly, I thought Cayha was the more interesting of the new characters introduced during Abyss – not that Abyss himself isn’t intriguing, but the mystery of his nature kept the story from really getting into the meat of his character. That being the case, I’m pleased to see her make a return and interested to see where her story goes from here. Is that a spoiler? Well, maybe a tiny one, but if you picked up the cues back in issue 121, her trajectory isn’t surprising… but it is potentially quite exciting.

The artwork for this issue is split between Howard Porter and Jorge Fornes, with the latter handling a short flashback into Bruce’s history as he reacts to Cayha’s story and intention.

I know Porter’s work is not for everyone – the more stylized an artist’s work becomes the more controversial they become much of the time. As I’ve said before, his style doesn’t always work for me. Even in this very issue, I find his take on, for example, Cayha to be a little awkward… but I have to admit, I enjoy his take on Batman himself. In Porter’s hands, Batman has a supernatural air to him – maybe it’s the unrealistic movement of his cape as it billows, draws close against him, or transforms into metaphorical wings.

If you’re wondering how Porter and Fornes mesh together, the answer is they don’t, which I suspect is the reason that the pages were broken down the way they have been. Fornes’ pages are a flashback to Bruce just after returning from his travels – in other words, around the time of Year One. This works beautifully with Fornes, whose work famously evokes much of the same noir feel as David Mazzucchelli’s in Year One.

All told a solid one-and-done story (kind of) that puts an effective close on our time with Joshua Williamson and sets up at least one character for future importance.

While backups have typically been multi-part, this month’s Ivy story echoes the main feature as a one-shot with ties to a larger narrative. Unlike Abyss, however, Photosynthesis by writer G. Willow Wilson and artist Dani sets up for the Poison Ivy series – not coincidentally beginning this week. We immediately learn about Poison Ivy’s rather difficult situation: since reintegrating Queen Ivy and the half-formed innocent Ivy into a single being, she has been losing her connection to the Green and reverting to her original human self. She does not take this well, leading her to an off-screen meeting with an unnamed person (though I expect it was Jason Woodrue – the Floronic Man). When that, too, does not go well, she undertakes a new mission and a new strategy for achieving it. This story also features the return of the Gardener, last seen in the final moments of Fear State.

Wilson is always a strong writer, but Dani’s artwork pops out at me here – it is stylish and beautiful, just reminiscent enough of Poison Ivy series artist Marcio Takara to flow well into the first issue, while still being unique. Dani makes excellent use of whitespace in particular – or empty space as the case may be, with shapes suggested by the use of shadows and textures rather than being clearly delineated. I’d love to see more of their work.

Overall, I’ve had a great time with Williamson’s time on the main Batman book. It was too short to go very deep, but in his time on the book he introduced some interesting new characters, provided a cap to many of the ideas James Tynion IV started but didn’t have the time to tie up, began to mend Bruce and Damian’s fractured relationship, and set the long-misused al Ghul family off on a new and improved direction. What else could I ask for in less than ten issues?

Doubling as both a one-issue story and a coda for an earlier arc, Batman #124 is a welcome and satisfying breather after a long chain of multipart issues and crossovers. The Poison Ivy backup serves as an enticing appetizer for the new Ivy series.