Batman #125: Batman and Robin Go To The Ball 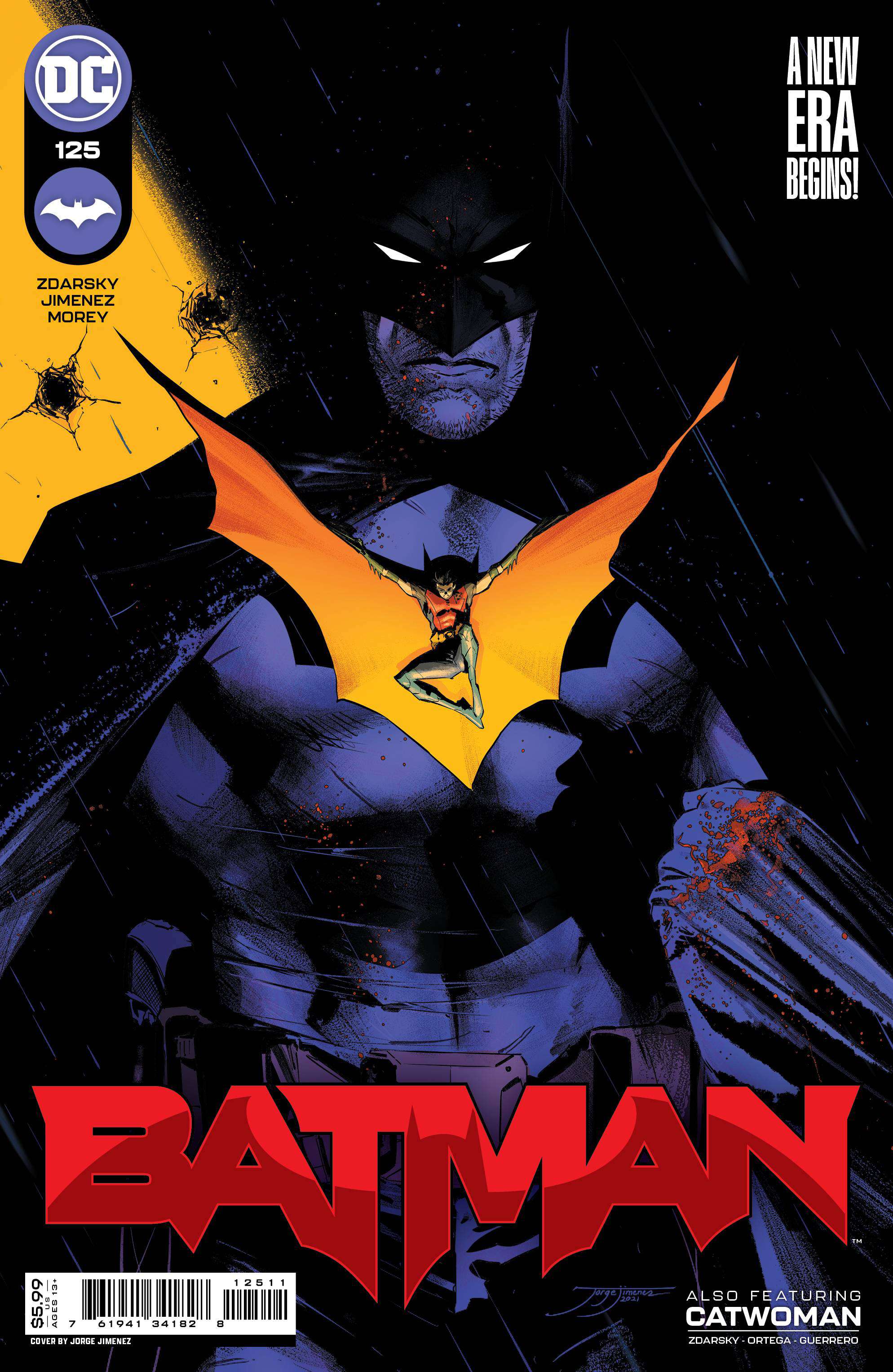 When the wealthy citizens of Gotham come under assault, Batman must go undercover to confront the bitter grudge of an old foe. To do this, he and Tim Drake must venture back into the most duplicitous setting of all: a high society gala.

Meanwhile, in the Catwoman backup, Selina is approached by a robot with a mighty need: he must locate the ten people on a certain list within the next seven days.

Issue #125 marks the beginning of a new era for Batman with the arrival of superstar writer Chip Zdarsky, as well as the return of equally superstar artist Jorge Jimenez – the latter having been James Tynion IV’s partner in Batcrime.

I am someone who quite enjoyed both Tynion and Williamson’s time on Batman; I went into both generally positive about the writers and emerged from both satisfied. However, I would be lying if I said the announcement of Chip Zdarsky’s turn at the helm did not send my heart aflutter. Though I have not yet delved into his critically acclaimed Daredevil run, I am familiar with his work from the Red Hood-centric story that opened the Urban Legends title (and I reviewed it at the time), as well as some of his creator-owned work… and I’ve loved The Knight, so I was pretty convinced that he was a great fit for the main title.

It’s only been one issue but so far I have not been disappointed.

Batman #125 is the first part of Zdarsky’s “Failsafe,” which is set to introduce a character Zdarsky has touted as Batman’s Doomsday. That said, this issue is primarily about establishing the status quo as it currently stands – you could say it’s about putting the pieces in their correct place on the chess board that is Gotham City.

The first stop on the status tour is Batman’s on/off relationship with Catwoman. Once the centerpiece of Tom King’s 2016-2019 run, the BatCat relationship was shuffled off the main stage with Tynion’s arrival and further back-shelved when Batman and Catwoman decided to take a year off from one another to reorient themselves. That plot point has been… confusing, with the relationship neither wholly on nor truly off. Now, however, we may be close to a definitive answer, and it looks to be a loss for team romance, at least so far; Bruce contacts Selina to check in on her only to find her sharing her bedroom with another man (Valmont, featured in the current Tini Howard Catwoman run). This prompts him to note that it’s time to let go of the past and focus on the work.

This brings us to the second stop: a healthy dose of Batmanning and laying the groundwork for the story to come. After arriving too late to prevent the murder of wealthy couple Colin and Clara Fitzroy, Batman follows the leader back to the Penguin, who is currently in the hospital dying from mercury poisoning. Should have put the fish down from time to time. As the last act of a vindictive dying man, the Penguin has put out a hit on the elite of Gotham City – now Batman must prevent that from spiraling out of control and devouring the lives of any more of Gotham’s jet set.

And the third stop – Robin. With Bruce’s son Damian choosing to break with both Bruce and his mother Talia (with their blessings, which seems odd given that he’s a child), the position of Gotham’s current Robin has returned to Tim Drake. Honestly, I’ve never been the biggest fan of Tim Drake – not that I mind him, but he’s never excited me. Even so, seeing Batman and Robin working in tandem again does excite me, as it has become all too rare. While concerns about the child soldier aspect of Robin are valid (though Bruce calling them soldiers, as he does in this issue, has never sat well with me), Tim is currently old enough to reduce the visual discomfort of it, making him an excellent choice for the “and Robin” part of Batman and Robin, at least for the moment.

The fourth and final stop on the tour? Bruce Wayne, here shown reestablishing his playboy persona, arriving at a society party with an unnamed lady on his arm… in the service of a case, of course.

In many ways, this feels like a slow return to the most iconic form of Batman with many of the most iconic aspects of the character sliding back into place after a long time away. He’s just a few billions, a move, and a butler away from being full classic… and that isn’t a complaint. It feels like coming home. There is some danger in it, of course – a familiar status quo can lead to overly familiar plots, but frankly, I’d be surprised if Zdarsky went that literal with the return to form, and starting from a certain place doesn’t mean staying there forever.

Surprising no one, Zdarsky has a strong voice for Bruce – but we already knew that from Urban Legends and The Knight. His Batman is aloof and intense, but without crossing the line into being cold or losing his compassion. Everyone loves a character for their own reasons, and for me, a big draw to Batman’s character has always been his single-minded dedication to his mission. Romances and family drama are fun but in recent years, I’ve personally felt like that has at times become clouded, his priorities skewed, so it was gratifying to see him double down on his commitment to Gotham City first and foremost.

It’s particularly appropriate for what seems to be Zdarsky’s simple statement on Gotham City – “This city wants to die.” I guess that makes Batman the one trying to save it from itself, which seems on point to me.

Jorge Jimenez’s return is welcome after seven months! The guest artists such as Molina, Janin, and Porter have all been enjoyable but there’s something special about settling into a run with a regular artist and that seems rare these days. Now, though he has returned, Jimenez did not bring his previous style with him, at least not on whole. Instead of the high-octane, anime-influenced work he did with Tynion, he has chosen a more organic, black-heavy approach – sort of a classic superhero meets noir look that fits the atmosphere very well. The opening pages are rough in just the right way – Bruce’s figure is rendered as much through the shadows that define his musculature as the linework proper. It’s also interesting to see the contrast between the public scenes at the society outing and the moodier scenes in Bruce’s bedroom or his bat…garage? with the Bruce Wayne moments showing a more traditional, clean-lined look that effectively conveys the difference between Bruce Wayne’s world and Batman’s.

Pulling it all together we have Tomeu Morey, whose brilliant color artistry has been a staple of the Batman series since Tynion’s first issue. I can’t say enough about Morey’s work – the atmosphere, the use of light, and of course the distinctiveness of his style, which has defined the look of Gotham City for me.

Great start to what will hopefully be a great run. Well, I have a lot of faith in Zdarsky and the altruistic broodiness of his Batman, so I’m excited.

Speaking of Zdarsky, there is also the Catwoman backup feature, “Two Birds, One Throne.” I’ll be honest, I was a bit confused about why Catwoman had a backup here given that she has her own book, but after reading the story – courtesy of Zdarsky and Belen Ortega – I can see the logic. While it takes place firmly within the Tini Howard and Nico Leon run of Catwoman it also sets Selina up to affect and interact with the main feature’s story. The use of the same supporting cast and a similar general tone also makes me feel rather good about continuity in this run.

I’m familiar with Ortega’s work from her time handling the Punchline backup in Joker, and her work is just as charming and charismatic here as it was then – her Selina is especially… adorable. Is it all right to call Catwoman adorable?

“Two Birds, One Throne” provides some fun and exciting content – something I think Selina could use these days after years of being rather serious and broody for a while now. I’m looking forward to seeing how her bounty hunting adventure plays out and how the story does or does not hook back into the Batman plot.

As the first issue of a new run, Batman 125 effectively establishes the status quo for the Batman title as well as setting up for what’s to come. There are shocks and twists but nothing that seems out of nowhere. Overall, a strong start that leaves me hungry for more.

Batman #125: Batman and Robin Go To The Ball