Batman #126: A Failsafe Plan to Take Down Batman 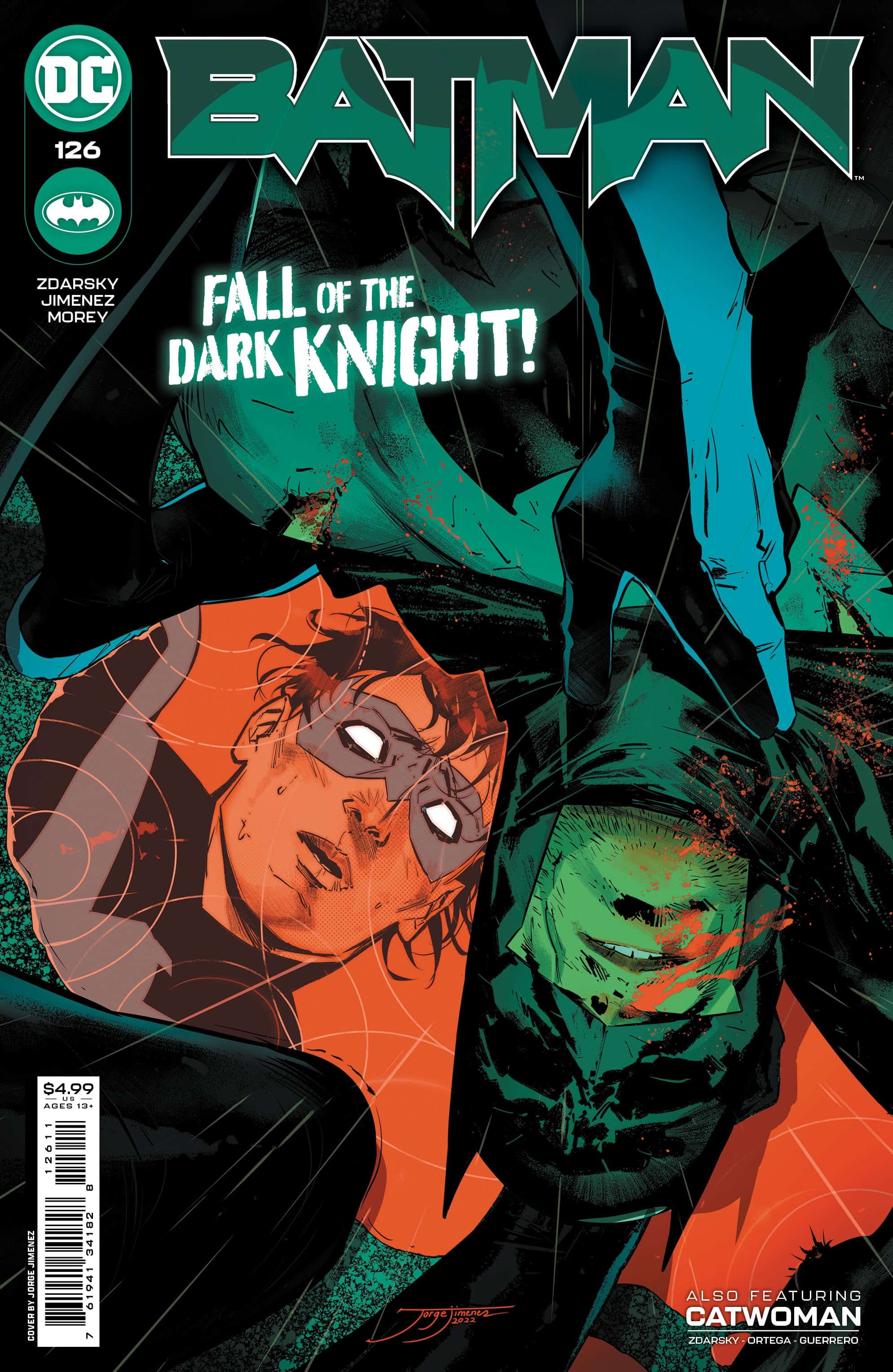 The newly recovered Tim Drake joins Batman in a battle against the sudden attack of Failsafe, a mysterious robotic villain bent on destroying Batman. As the batfamily gathered to take on this new threat, however, Batman struggles with a growing understanding of who this threat may be, and what must be done to combat it.

And in our Catwoman backup, Selina’s mission to locate the late Penguin’s offspring has brought her onto several murder scenes, too late. With his heirs seemingly removed from the table, who will inherit the Penguin’s estate?

I’ve always wanted to see what Chip Zdarsky would do with Batman. He is, by any standards, an excellent writer. I loved his work on the Batman/Red Hood story that kicked off Urban Legends. I also think Batman: The Knight is a fantastic take on Batman’s training days that has proven that Zdarsky understands the basic concepts that go into Batman: the good heart that lurks under his cold exterior and the altruism that motivates his having taken on the mantle. It’s a  take  I much prefer to some of the more nihilistic interpretations that put his mission down to emotional dysfunction or the inability to move past trauma; that always seemed odd to impose on a hero (at least to me).

Now that he’s on the main Batman title alongside one of my favorite modern Batman artists, Jorge Jimenez, I’m not entirely sure what to think. But more on that in a minute. First, let’s go to the beginning.

Batman #126 opens with the backs of six members of the famous Batfamily as they don their heroic guises – a mask, a cowl, a hood. Over the evenly spaced, uniformly sized panels, Batman describes them – his soldiers, the bravest young men, and women he’s ever known. He references his lack of dreams… and then we pivot to him on a fire escape, joined by Tim Drake, the current Robin of Gotham City, who barely survived a major injury in the last issue.

From there, we follow Batman’s internal monologue as he ponders his inability to dream of better things – the failure of his engagement to Catwoman and the impossibility of finding love and happiness in his line of work, and the endlessness of the fight. Over his shoulder, the new villain Failsafe appears as glowing lights in the shadows.

What comes after is a brisk, beautifully portrayed battle between Batman (and later his allies) and Failsafe. The villain himself is a robot built from a variety of different technologies – including technology sourced from the Justice League-breaking android, Amazo. Its origin is unknown to the Batfamily, though it is very clear about its objective: it has come to destroy Batman… and it approaches this goal with a Terminator-like focus. The only one who may know what it is, how it came to be, or how to stop it is, of course, Batman himself… though it isn’t immediately clear what connection there is between them.

It’s all pretty exciting and enjoyable to read, so it’s not as though I have a problem with the content per se, but even so as I read issue 126 I found myself less engaged than I would have liked to be… and it didn’t take long to piece together why.

It’s Batman’s mental state and approach to his mission. It’s the way he calls his children and allies “soldiers” and pontificates on the impossibility of happiness – the futility of trying to maintain a personal life in the face of his responsibilities as guardian of Gotham City.

Don’t misunderstand. I don’t expect Zdarsky to continue in that vein forever. It would be odd to begin a story with Bruce in a certain place and end it with him in the same place – that’s stagnation and, worse, It’s questionable writing. I imagine that the controversial terminology, the fatalistic perspective on relationships and happiness, the grim tenor to Batman’s inner thoughts, represent The Ordinary World –a term out of creative writing that represents the day-to-day status quo of the hero from which he will soon be torn and by which he will soon be reshaped for better or ill.

All that’s fine, and it is a compelling arc, but it’s also an arc Bruce has undertaken many times. I know that comics are cyclical and that the same themes (and even the same plots) will often repeat as characters will tend to reset to their defaults, but the last time we saw a writer tackle this theme at length was Tom King’s run which only ended a little over two years ago.  It just seems a bit early to be revisiting this issue.

That said, I very much like that this arc is starting at the beginning of his run rather than the end. I have often thought that approaching comic runs like novels where the first issue of a given writer’s time on a book is the opening chapter and the end of the run brings the character’s arc to a close is a bit of a problem in comics because when the run ends, the next writer comes on and just resets to status quo again. By (hopefully) placing this part of the story upfront, Zdarsky may have more room to play with whatever conclusions and lessons Bruce takes away from his encounter with Failsafe. That won’t stop the status quo from returning in time, but it could potentially allow Batman to exist in the space created by his character growth or regression (depending on the outcome of the story) for longer than a single issue.

And, well, I do trust Zdarsky’s skills and instincts as a writer enough to have faith that the story will not be a simple retread. Even so, I’m likely to be a bit wary until we see where this is going.

In the meantime, the story is well-executed with beautiful artwork – as is to be expected from Jimenez. The veer away from his anime influences and more toward more traditional western comic portrayals suits the new tone of the book very well. Zdarsky’s Gotham City is more classic Batman than, say, James Tynion IV’s, which tended to lean toward cyberpunk and neon colors. As a result, Tomeu Morey uses muted reds, warm greys, and browns much of the time, giving the setting a kind of industrial grime look that works well with the darker tone.

In the Catwoman backup, “Two Birds, One Throne” by Zdarsky and Belen Ortega, we rejoin Selina Kyle as she seeks – and locates – Penguin’s previously unknown children… with poor results. It isn’t that she hasn’t found them, it’s just that they’re being methodically executed one at a time, and Selina never manages to reach them in time to save them. She doesn’t take that well, and this becomes the catalyst for the next phase in her adventure as she tries to piece together Penguin’s intentions… among other things.

Short and sweet, “Two Birds, One Throne” is a solid Catwoman story that fuses her more mercenary and more charitable sides while fitting cleanly into current continuity vis a vis Tini Howard’s Catwoman run. Belen Ortega’s Selina fights like a cat, all agility and claws. She seems a bit too cute for the Catwoman in my mind, but that’s subjective. I’m a bit surprised that Penguin’s personal fortune was so “small,” but honestly he probably spent most of his inheritance on bird supplies.

It’s a fun story, and well worth the read if you’re a Catwoman fan.

Generally speaking, I felt that the previous issue was the stronger of the two released thus far. However, despite my hesitance, there’s a lot of great stuff happening, and a lot of potential here. I’m just waiting for Zdarsky to stick the landing.

Batman #126 is a solid and enjoyable read. While it does retread some recently stampeded ground, I am more than willing to give Zdarsky the benefit of the doubt for the moment, so we’ll see where it goes.

Batman #126: A Failsafe Plan to Take Down Batman