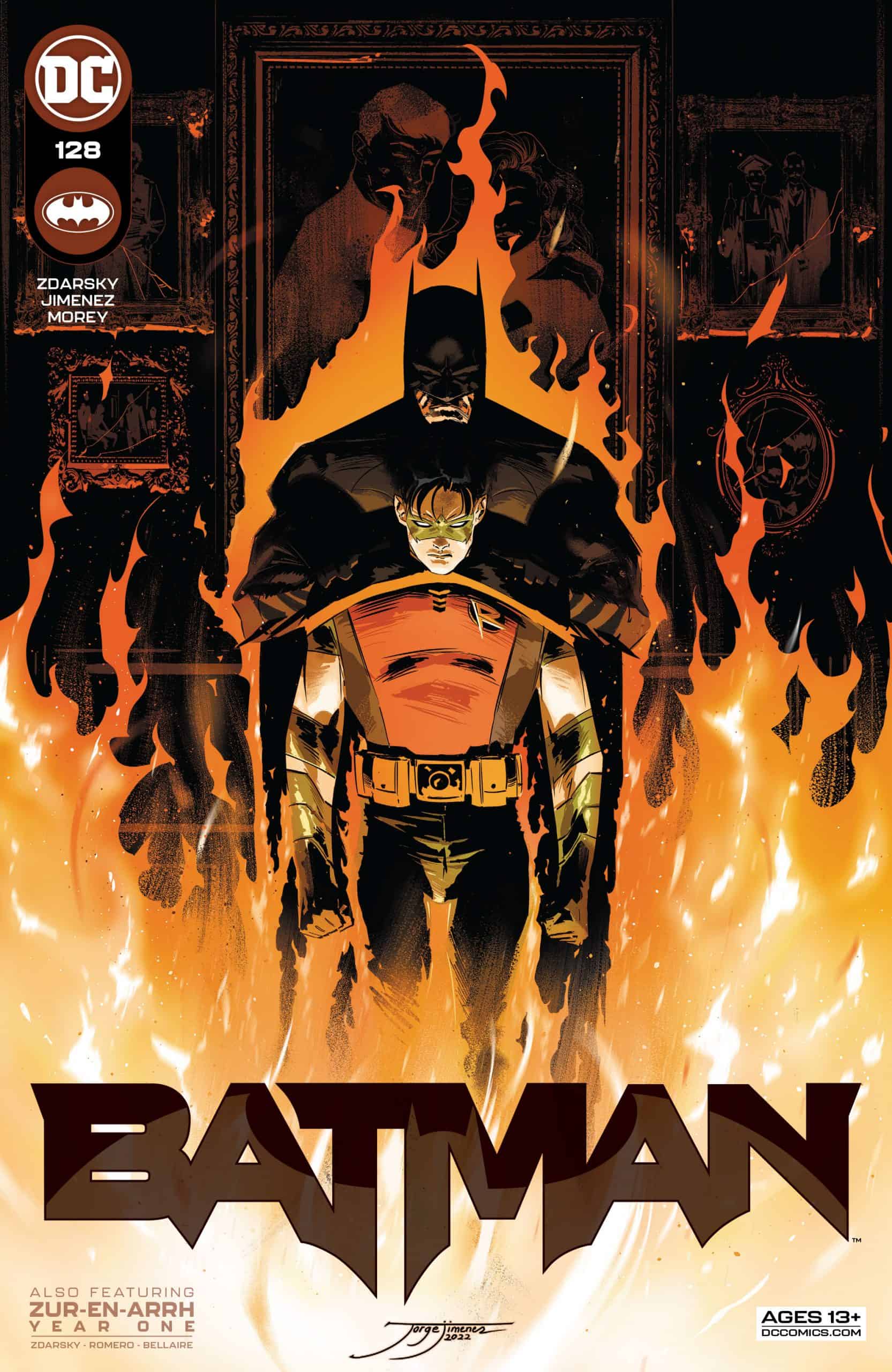 A catastrophically injured Batman is barely saved by the arrival of the Justice League... but their decision to intervene to save his life may cost them their own. How can even the world’s greatest superheroes fight a super-robot designed by one of their own to counter their every move?

And in the backup, we take a look at the early days of Batman’s relationship with his alter ego, the Batman of Zurr-En Arr.

Towards the end of Issue 127, Batman was beaten nearly to death by his own creation, the android Failsafe, only to be seemingly rescued by the Justice League as they arrived at Oracle’s summons. That should be great – but any relief their appearance may bring is short-lived. The problem? Failsafe has been built with the limitations and weaknesses of every individual Leaguer in mind, and it is more than capable of utilizing that programming to counter anything the League can throw at it.

Given that Batman 127 opened with a callback to “Tower of Babel,” a story that proved Batman is capable of taking down the entire Justice League if absolutely necessary, that’s not surprising. It also puts Batman himself in a difficult position – if Failsafe is primarily hunting him, can he justify letting them protect or save him even if it means their lives?

This being Batman (a hero!), the obvious answer is “no…” but that doesn’t mean his decision is simple. Now that Failsafe has been activated, someone has to put it down… and if the world’s mightiest heroes can’t manage it, then it falls to Failsafe’s creator to think his way out of this self-created catastrophe.

Or, as Batman himself says in the issue, Batman always has a plan… so what’s the plan, Batman?

Failsafe as a whole, the story itself, is a source of substantial internal conflict for me… and if you read my previous reviews of the story you can see me trying to work through it in my head from the first issue of Zdarsky’s run.

None of that conflict comes from the visuals. I’ve long been on record as thinking Jorge Jimenez is one of the best artists working in comics now, and I stand by that. He has a great many styles, which he switches into and out of depending on the specifics of the story and tone of a given run – with Tynion he trended toward an anime-esque style whereas with Zdarsky he has taken a more traditional approach. That kind of versatility is already admirable but even better, regardless of what style he chooses his work is always top-notch. Color Artist Tomeu Morey has never wavered in his expertise either – he always brings his A-game to every issue. The only issues I’ve ever had with this team were the mild confusion I suffer when time Batman’s eyes switch from visible to white-lensed without explanation and that one time when Bruce’s eyes were brown.

It’s really the story that is causing me this tumult. I’ve been reading Batman comics for Quite Some Time Now, through great runs and terrible ones alike. Usually, regardless of whether I liked a run or disliked it, I could at least decide what I thought of it.

Not so with Chip Zdarsky’s Batman run so far.

The thing is, the writing is solid and the characterizations are generally strong. We have an exciting story about, as Zdarsky himself dubbed it, Batman’s Doomsday. Failsafe does live up to that claim. Until now I would have said Bane filled that role – and maybe he did when he was first created. But he’s since become more like a normal part of Batman’s rogues gallery. Now Batman has what appears to be a truly unstoppable force of an enemy – and one who (like Doomsday) acts more on ‘programming’ than on malice. I’ve never been a person who resented Batman’s seeming invincibility – I just consider it part of being the protagonist – but it is interesting to see him pushed into a corner this way. That’s rare, and it’s exciting to see.

But, well, the story itself feels so much like everything I’ve read in Batman for the past six or so years that I’m not sure how to process it. It’s true that there’s no such thing as an original idea. Also, the quality of a story should generally rest on how well the individual story is written rather than its relationship to other stories. But it’s a little difficult with Batman, not least because he does tend to get stuck in these ruts of repeating the same beats over and over again.

It’s not that any of those stories were bad – I honestly enjoyed most of them and I enjoy Failsafe as well. It’s just that they’ve all hit similar beats and they’ve all happened since 2016!

There are ways to make that work. One of the things Tynion did during his run that made it palatable to me was highlight the effect these constant cataclysms had on the citizens of Gotham – the paranoia and the mass PTSD that would inevitably occur. This helped me to appreciate, say, Fear State – it not only acknowledged the repetition of its themes, it even let that repetition help shape the story itself.

Maybe Failsafe will do that as well… but it’s been less than a year since the last go-round wrapped up, so I’m not sure what could be done with the concept that wouldn’t feel all too soon. The fact that this comes just after the renewal of the “can Batman be happy/are child soldiers okay in a superhero context?” argument, which was also just addressed at some length, has me finding this run a little frustrating so far.

It’s frustrating because I truly love and appreciate Zdarsky’s writing… and I know he can nail Batman and his world because his previous use of the character has been spot on. That makes it all the more confusing that so much of the run feels like Batman’s Greatest Hits.

That doesn’t mean the story is bad, not at all. It’s well-written and executed. It also isn’t an exact redo of its predecessors.

For one thing, Failsafe rests on Batman’s own psyche rather than the effect he has on villains or their desperate need to grab his attention.

It also switches things up by bringing in the Justice League. I’m not sure how much if at all, they will appear in the next two issues, but the potential is there. We don’t often see full-out superhumans in Gotham. That we do here creates an opportunity to reveal the extent of Batman’s plots, right down to the environmental traps laid down in advance in case of this kind of confrontation. I know a lot of people dislike the idea that Batman would plan against his friends and colleagues, but it’s never really bothered me. Indeed, I’ve found it pretty effective as a whole at making me think about what it must be like to be friends with – or even just work with – someone who hides so much distrust and borderline paranoia behind their eyes.

If the next two issues lean into those things, the story can establish its own identity and stand apart from other recent tales with similar premises. But…

Overall, I’m not sure what to think about this run so far. In short, it’s good but it hasn’t blown me away and I kind of expected to be blown away. The first arc of any run is typically devoted to taking the character from where they were when the new team arrived to wherever the team wants them to be, and I get that. Whether the rest of the run hits for me partially depends on what status quo Zdarsky would like Bruce to land in, and where he’d like to go from there.

It’s especially funny because I feel like the backup for this issue, Zdarsky and Romero’s “I am a Gun,” is more indicative of what Zdarsky can do with the character. A dark and more psychologically driven tale, I Am a Gun examines the moment when Batman realizes the danger inherent in the possibility that he could be mentally compromised. With the understanding that he is as dangerous as any firearm could be, he sets about creating a safety mechanism to keep him in line when necessary. Eventually, the story incorporates the Joker – and touches on the changing nature of Gotham’s rogues as they begin to grow “dark” after seemingly being distracted into playfulness by Robin’s presence for a short time.

Like the lead feature, I Am A Gun has truly phenomenal artwork – Romero swaps styles between a Mazzucchelli-esque noir style and a Dick Sprang-inspired retro style for the Zurr En Arr sequences. Taking her cue from the stylistic shifts, color artist Jordie Bellaire effortlessly switches between the desaturated real world and the bright intensity of Batman’s remembered delusions.

It’s an enjoyable backup and a reminder of what Zdarsky can do with the character. Hopefully, he’ll bring that energy to the lead features in the future.

While boasting excellent execution and beautiful visuals, Failsafe continues to feel a bit like a Batman’s Greatest Hits style story and I’m a little ambivalent about that. That said, it does mix things up with a different focus and approach than similar plots, and the potential exists for the story to establish an identity of its own.  Recommended to those returning to Batman after a while away, fans of Chip Zdarsky, or people who don't mind the familiarity of the premise.