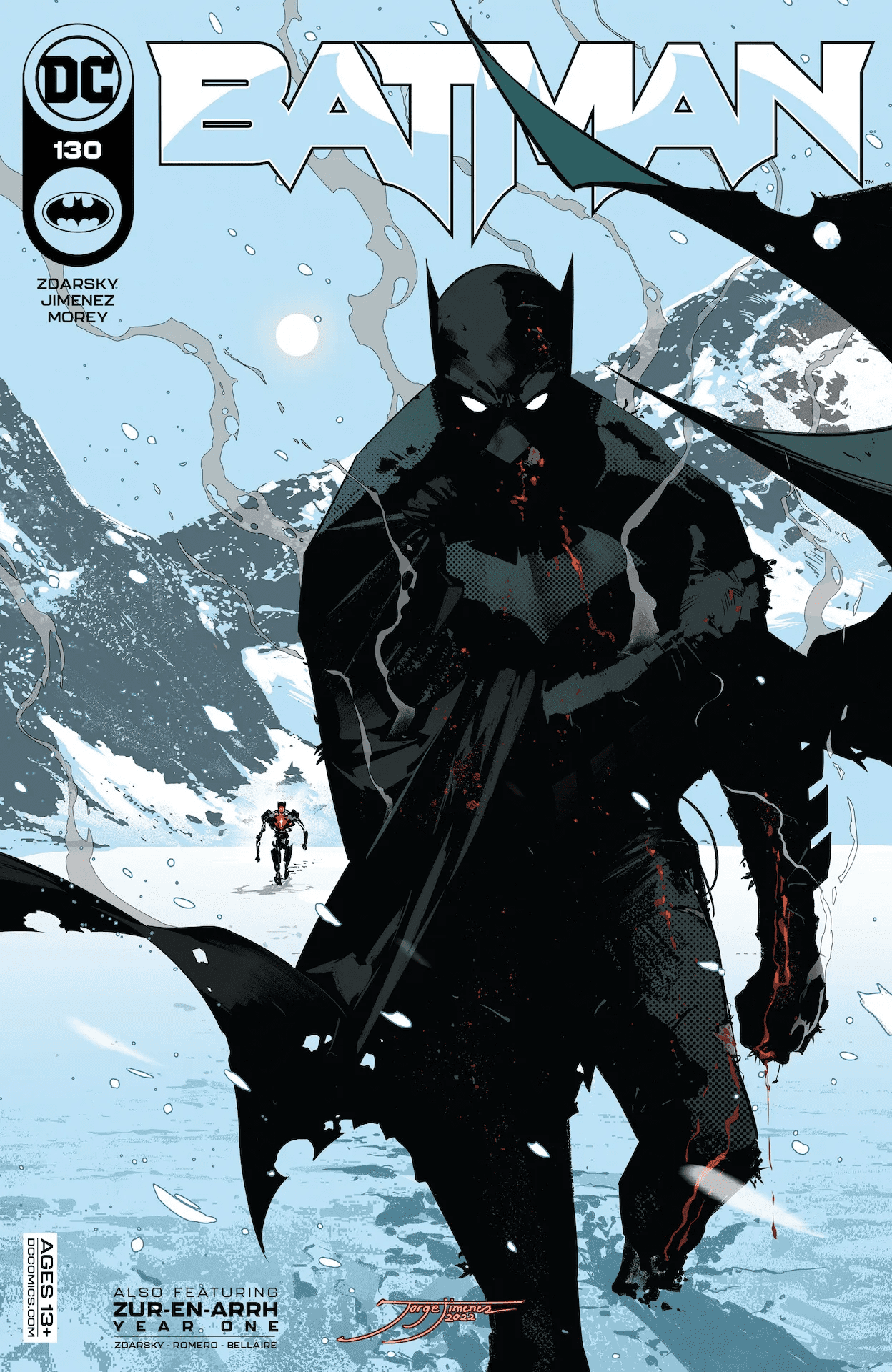 Batman manages to return to Earth intact, but that doesn’t mean he can relax; if he's back, then the terminator-like super robot Failsafe is not far behind. The good news is, Batman has come up with a plan with the potential to change the trajectory of the battle. But even if the plan succeeds, will it work in time to save Batman from his most dangerous creation?

The months since Chip Zdarsky and Jorge Jimenez began their shared run on Batman have been rough, both for Batman and (to a lesser but significant degree!) for me, as a reader. Batman’s been fighting a mechanical Frankenstein of his own creation – though “fighting” is honestly a bit generous for what mostly consists of barely surviving repeated encounters. I, on the other hand, have been experiencing a kind of emotional whiplash caused by my high expectations, subsequent sense of mounting disappointment, and then the sudden reversal from the last issue that made me go from “this is okay but…” to “wait, this is awesome.”

All that being the case, I approached this final chapter of the “Failsafe” storyline with cautious optimism. Where would the issue fall in my “eh to YEAH” scale?

We pick up with Batman floating in outer space, barely protected by the technology infused into his costume to assist him in all those insane Justice League missions everyone says he has no business being involved with. Despite the tech keeping him alive, Batman is aware that it can’t last forever… but Failsafe has destroyed all of the Justice League’s ships to prevent Batman’s attempts to survive. Fortunately for him, he manages to locate a lifeline of sorts in the form of a ship that is currently more rubble than anything else. If he plays things right, he may even survive his return to Earth. Barely.

But what if he does? What then? He is only human and he’s being tracked by a piece of technology capable of taking down the entire Justice League – one he created and programmed specifically to relentlessly pursue him until his death. Can he take on that kind of monster and survive?

For someone like Bruce, that may not even be the most important question. Better to ask, If he dies, will everyone else survive?

The beginnings of his plan were set into motion in the last issue, but this is where things come to fruition, for better or worse. This is Batman, so it’s a fair assumption that Bruce won’t literally die… but then again, given the current upsurge in al Ghul/Lazarus-related stories and appearances that may not be as certain as one might assume.

One of the things I’m enjoying about Zdarsky’s run thus far – though it took a few issues to form, is this balance he’s walking between the two major camps of Batman psychology, namely, is Batman an inspirational hero motivated by altruism or is he the dark monster lurking inside a mentally ill Bruce?

Zdarsky’s answer has always been fairly clear, I think – going back to the Knight where he established that the modern Bruce is essentially an idealist motivated by the desire to save everyone – everyone. The former is the classic take that went mostly unquestioned until Batman began taking a dark turn during the 80s which has escalated (and ping-ponged back and forth a lot) since. Recent years in particular have found the latter take pushed by major creators and Hollywood alike, with the mental instability theme being prominent in recent runs (e.g. Tom King’s) and in the most recent Batman film, Matt Reeves’ The Batman.

That leaves the modern Batman – the Batman that Zdarsky inherited when he stepped onto the title, kneck deep in that newer, more cynical interpretation. So if Zdarsky seemingly considers Batman to be an idealist, but he inherited a cynical and troubled modern Batman, what can he do?

It seems to me that he did something similar to Matt Reeves, in fact – he begins Batman in a dark place and starts building him back up. But in Zdarsky’s case, it’s even more interesting because by combining things like Zurr En Arr with the ideas implicit in stories like Tower of Babel or the corruption of Brother Eye, then marrying them to his more optimistic take on Batman’s core motivations you end up with a complicated takeaway on the nature of power and the danger of corruption in even the most well-intentioned people.

What I’m getting at is this: Batman begins from an optimistic place in Zdarsky’s backstory. Sure he starts out troubled and angry, but by honing himself and focusing his intention he finds his calling and becomes a true hero – someone who just doesn’t want to see people suffer or die anymore and acts as he does in order to prevent those things from happening to the best of his ability. However, even the iron-willed Bruce Wayne and so in the process of pursuing his goals there is always the temptation to go just one step further, push just a little bit harder. And that’s how you end up with people who enter public service positions with good intentions becoming slowly chipped down and corrupted over the years. In this context, the darkest Batman – the monster inside Bruce Wayne’s head – becomes the worst-case scenario that he has to avoid falling prey to, instead of the standard assumption about how and what he is.

I think that’s a great compromise between the two different “takes,” so to speak, as it allows the heavy psychological stories about Bruce struggling with his dark side and still lets him be an inspiration and a hero for the rest of the week.

In a real way, that’s what the plot of “Failsafe” is really about – it’s the nightmare dreamed up by the monster Batman coming for the hero Batman. It’s a literalization of the battle within Bruce himself: is he the general in a war on crime or a hero and a father? Does he exist to fight or to save? Anger versus compassion. Most of all, though, it’s head vs. heart and one very important question: If Batman is a living weapon, in what way will it be used?

This is carried through in the backup story, “I Am Gun” by Zdarsky and Leonardo Romero. I’ve never been a huge fan of the Zurr En Arr concept, but these two have been doing some pretty remarkable work with the concept. This time around, we pick up where we had left off, with Zurr En Arr having taken control of Bruce’s body in order to execute the Joker, whose… Jokerness makes sparing his life a little ridiculous from the conservation of innocents standpoint. I’m not saying Batman should kill the Joker, I’m just saying from a utilitarian perspective that’s probably the way to go.

But Bruce isn’t truly a utilitarian any more than he’s as cynical as he seems. At base, he’s an idealist and an optimist, and so the very idea of executing anyone, even the Joker, sets off a psychological journey in which he is forced to face himself, his feelings, and his fears. And it’s just fantastic. It also features some of the most genuinely creepy visuals I’ve seen in a comic for a while – the simplified happy ’60s design of Zurr En Arr makes for some serious nightmare fuel when used properly…. which he definitely does.

Jorge Jimenez is brilliant, as always, though I will say I find the drift into showing Bruce’s eyes when he’s in the cowl a little unsettling. I’m not sure why he’s being drawn that way more consistently now or if there even is a reason. But while I don’t love the choice aesthetically, it does make Batman look more human and less borderline supernatural which may be appropriate for this storyline.

This is almost more like an analysis than a review, but that just means I enjoyed it and found the themes interesting. Now, despite this being the final chapter of the “Failsafe” story, it ends on quite a cliffhanger. It will be interesting to see how the story progresses from here. I imagine the people involved may have learned some hard lessons from dealing with something on that level, but we’ll see. It should be interesting either way.

Fantastic issue. I feel like Zdarsky hit his stride in the past two issues – or rather, all the setup he’d been preparing paid off, and the vision of Batman he has been working off of (and toward) has become clearer. There’s nothing strictly new under the sun, but by merging the dark psychological and the heroic ideal takes on Batman, Zdarsky has brought nuance and flexibility to the character while reconciling some conflicts of characterization without actually changing anything, and that is some impressive work.