Batman 2021 Annual: The Ghosts that Made the Ghost-Maker! 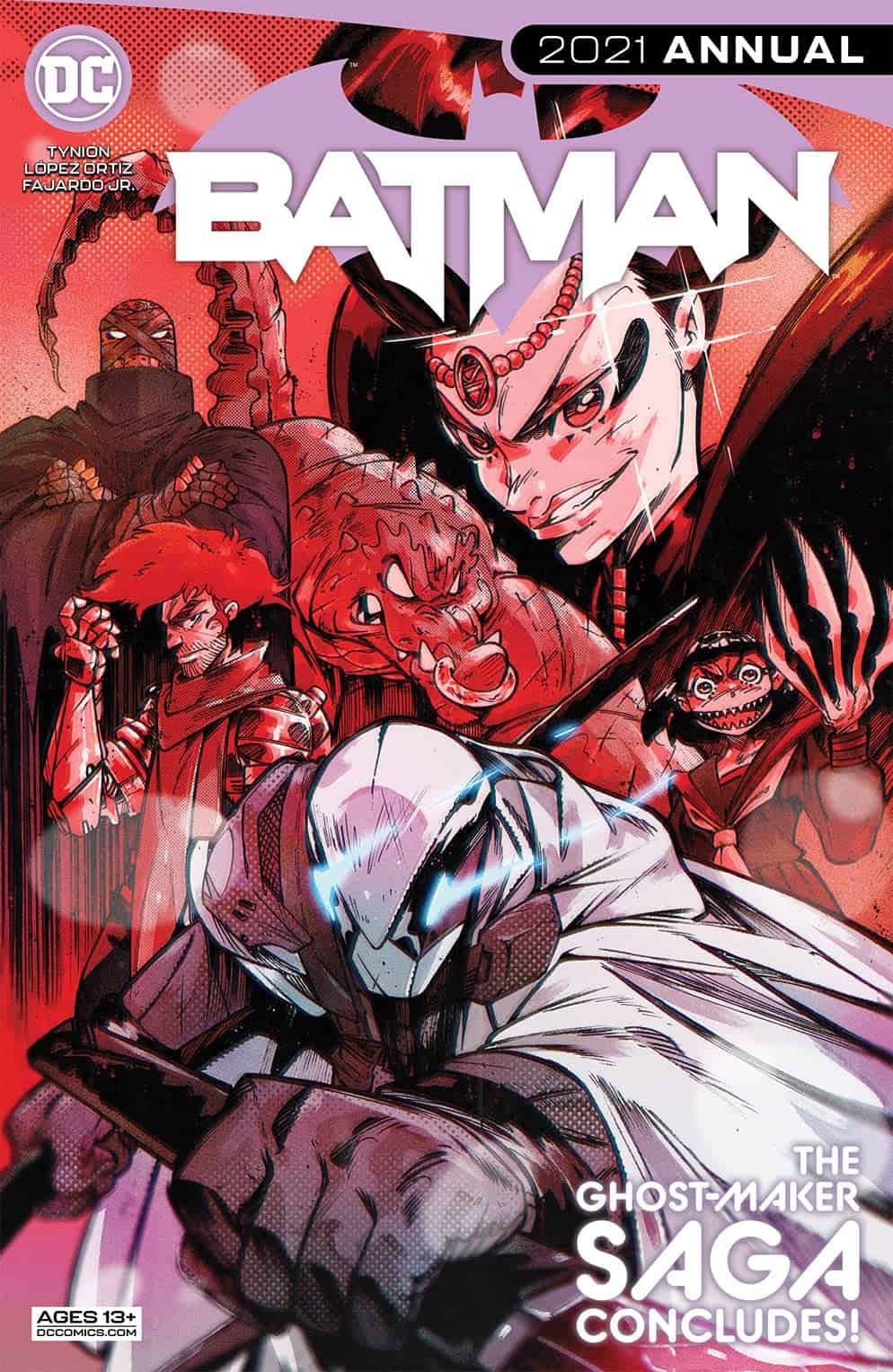 We return to the adventures of Ghost-Maker, as our (anti?)hero protagonist works his way through an alliance of his most dangerous enemies. The question is, after a long gauntlet of evading (mostly) traps and obstacles on his way to confront them, does he have enough energy and resources left to take them on and emerge victorious? And how does his mysterious past play into his conflict with lead villain Madame Midas?

A few months back, a GhostMaker backup feature ran in the main Batman book for several months, regaling us with the tale of one of Ghost-Maker’s more difficult encounters – a team-up between several of his most dangerous and powerful nemeses, led by Madame Midas, the wealthiest woman on Earth. The stories had the energy and feel of a shounen manga and slide a lot of excellent insight into the crimefighting side of Batman’s frenemy… but without telling us much about him as a person. It also left us on a cliffhanger with a resolution scheduled for Batman Annual 2021.

So, here we are, picking up where the Ghost-Maker backup feature left off, resolving this past story… and letting us know a bit more about the man himself along the way.

Now, I’ve been looking forward to this issue for some time, but I was a bit concerned that the gap between the final installment of the backup and its resolution in the annual would make picking it up directly a bit awkward. I assume Tynion and Ortiz also considered this because instead of jumping right in, they use flashbacks to Ghost-Maker’s childhood and a miniature framing sequence featuring Batman to bring the reader back into the mood of the story. The latter also gives Ghost-Maker himself a chance to give a brief recap of where the plot left off to refresh the reader’s memory.

The remainder of the story is narrated by Ghost-Maker as he tells the story of his confrontation with this alliance of supercriminals to a mostly unimpressed Batman who is perhaps the only person capable of seeing through the obfuscations Ghost-Maker puts up regarding his character and motivations. That’s not to say that his presentation of events is inaccurate or exaggerated – there’s nothing to suggest that it is, and with Ghost-Maker ostensibly being roughly equal to Batman, there’s no reason to doubt that he could achieve the things he claims to have achieved. Rather, it’s his presentation that is biased – Ghost-Maker is a diagnosed psychopath, but more than that I think he’s quite narcissistic and unwilling to reveal any vulnerabilities even to his… “best friend?” If that’s what Bruce is to him.

So what motivates him? Why was he focused on taking down Madame Midas, to begin with? …come to think of it, why is he even a crimefighter? In theory, it’s for the glory, or at least for the excitement, and while that might be motivation enough, is it?

The answer to that question, which I am not going to spoil, rests in the other thing that makes up this Annual – a trip into Ghost-Maker’s past, wherein we see him as a child and, for the first time, learn his true name.

Now, I’ll be honest, I’m a little ambivalent about the idea of using the annuals to books like Robin or Batman as wrapups or solo features for characters other than, well, Robin or Batman. I love Ghost-Maker as a character, but when buying a Batman annual, I’m generally looking for a Batman story. It’s obvious that Tynion and Ortiz know this – aside from allowing them to drop some exposition and memory refresh dialogue without being jarring, Batman’s presence also allows the book to justify being a Batman annual at all… though I’m not sure why Ghost-Maker didn’t just get his own wrapup special ala Justice League Dark or Midnighter.

But that quibble aside, this is a great ending to what was a really fun and interesting backup story. In the end, the delay didn’t really affect my interest level very much, and the new information being doled out regarding Ghost-Maker’s past was enough to revive what interest did float away.

It helps that I just love Ricardo Lopez Ortiz’s work, especially for this kind of story. It is dynamic, visceral, and manga-flavored without tipping over into actually trying to be manga. Given the sendoff Ghost-Maker had in Fear State Omega, I wonder if Ghost-Maker and Clownhunter are destined for a miniseries or something, and if so I’d be thrilled if Ortiz went along with them – his style seems appropriate for Clownhunter as well, really. The same goes for Romulo Fajardo Jr, whose color artistry is always spectacular. Here, he elevates the work with a rich palette that makes each character and every panel pop.

…I do wish they’d explain why Madame Midas has gold skin, though. Is she wearing makeup? Does she have some kind of Colossus-esque power that turns her into organic gold instead of organic steel? Is it body paint? I have no idea. I’ll also mention that Ortiz snuck a Pattinson-like collar onto Batman’s costume. I’m not especially into collars on Batman, but I do think it works very well with Ortiz’s interpretation of the Batcostume.

Altogether, the annual wraps the story in a satisfying bow while opening new paths to explore with these characters if future creators wish to explore it – which I hope they do. It also serves as a nice bow on the era of Batman and Ghost-Maker running around Gotham together, which officially closes as of Batman: Fear State Omega.

A satisfying and long-awaited end to the Ghost-Maker saga from Batman backup features earlier this year. Ghost-Maker as a character has a great deal of potential and this annual has only just started to really explore that. As it stands, it is an effective exploration of his history and abilities, with additional insights into his motivation and his dynamic with Batman.

Batman 2021 Annual: The Ghosts that Made the Ghost-Maker!