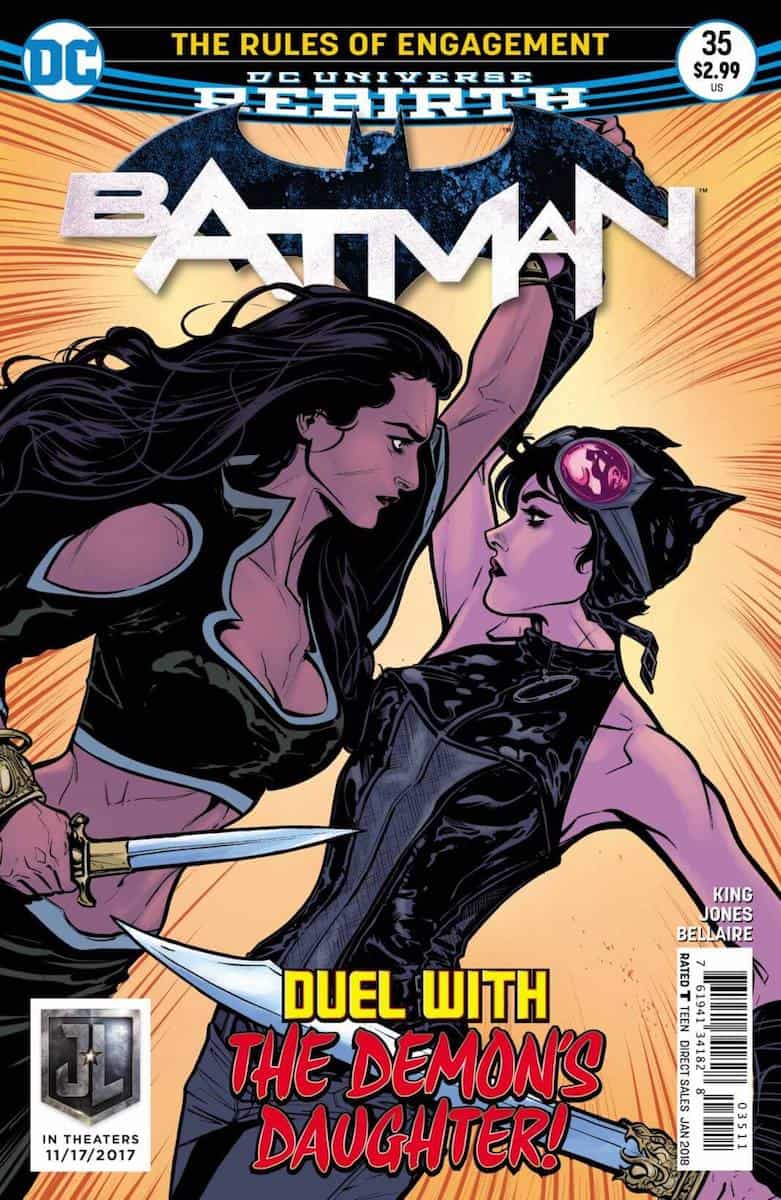 Part three of the Desert Drama that find Catwoman and Batman in the lair of the League of Shadows.

Batman has asked Catwoman to marry him, and of course, this means that Bruce Wayne has asked Selina Kyle as well. She has accepted, but first, she has to clear her name of 237 Murders that she was blamed for, but did not commit.

The trip has become increasingly more difficult, as one of their Horses died, and then they were attacked by a Cabal of Tongueless warrior guards. They have come seeking Hollie Robinson, whom actually murdered the 237 people, and to clear Selina Kyle’s name.

In an arduous battle with a multitude of Guards, each skilled in the ways of the League of Shadows, Batman and Catwoman have finally made their way to the daughter of the Demon. Talia Al Ghul herself. She has made quick work of an exhausted Batman, stabbing him in the shoulder blade. She Challenges Selina, and Selina takes the sword from Batman’s back and the duel has begun.

Talia explains that she has held a sword every day since she took her first step. As she fights Selina with an expert skill she explains that when she lost, she died, and was thrown into the Lazarus Pit to repeat the process until she won.

Selina as athletic and battle-tested as she is, fights back and remarks that she has only held a sword a number of times, and “How impressive is That?” 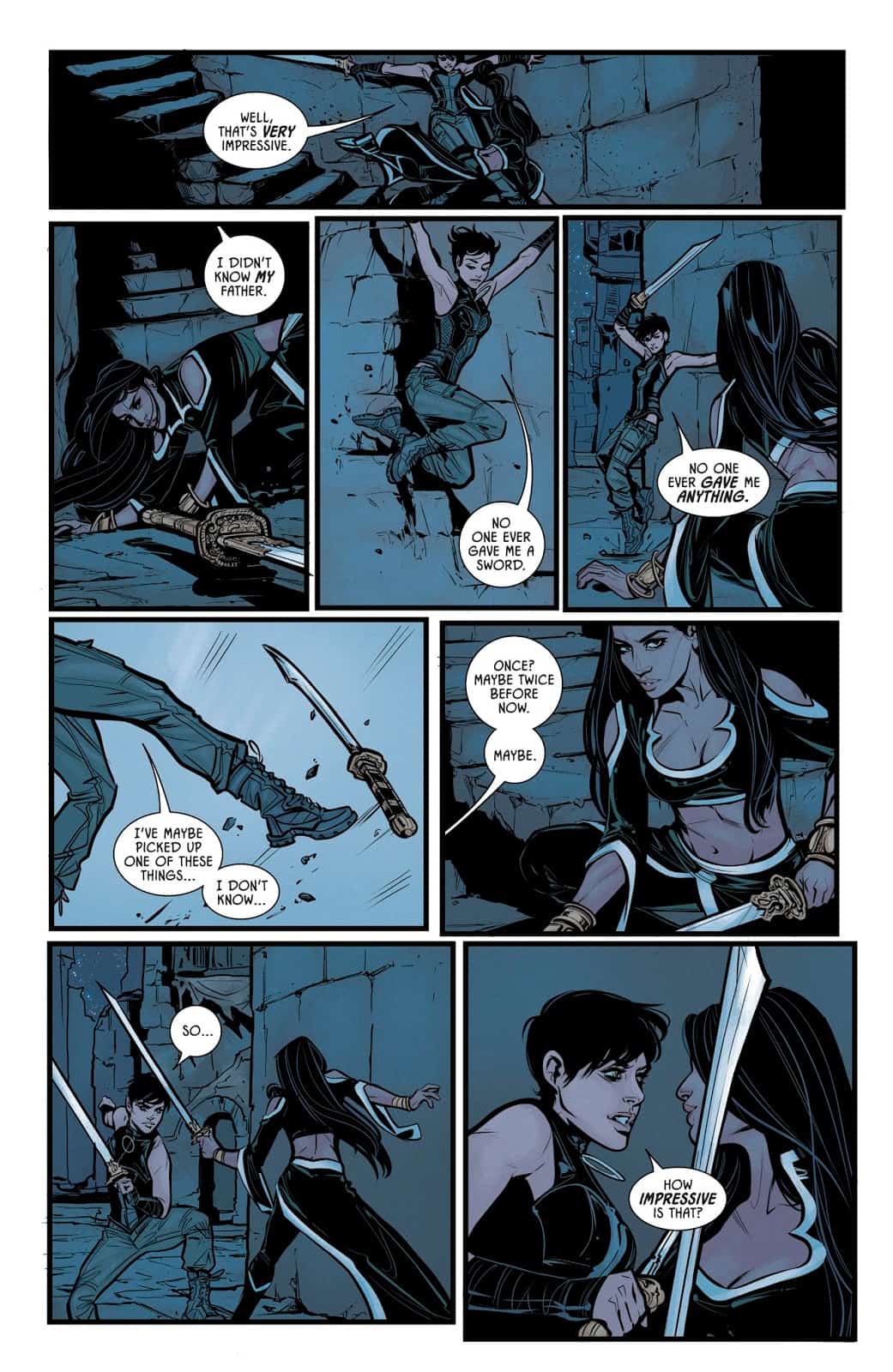 Outside on the stairs, Damian and Dick sit and wait for Batman to emerge. Having been forbidden to enter by Superman and the UN, they will wait for Batman to return to the entrance. Damian comes to a realization, showing his softer side. They postulate as to why Batman didn’t confide in them. Robin says to Dick ” I do not Know. I do not Care, What my Father chooses to do is the choice of my Father. Because He’s Batman and I’m Robin”

Nightwing proceeds to laugh at him and make fun of that statement, and his morose attitude in general, in the jovial way that we would expect from the Original Robin. He explains that he knows Bruce pretty well, and he thinks that he knows why he never told the extended Bat-family why he asked Selina to marry him. He says that”Batman gives all that he has”, and that him Marrying Selina is a selfish act, and that he is unaccustomed to acting this way. He is always the first to Bleed in a Battle and protect everyone. This means that he has to do something for himself. The two have grown closer by this bonding experience, and each become better at understanding the Motivations of their Mentor.

Batman slinks away in the shadows, while Catwoman battles Talia. He is Bloodied and clearly exhausted.

Talia is in clear Super Villain mode, and asks Selina what makes her think she is worthy of calling herself batman’s equal? The battle all the while raging on.

Then Selina Kyle explains something that is surprising and makes a lot of sense about their relationship. 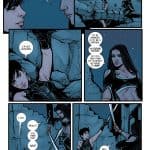 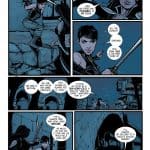 “I will always be second to a Child’s Idiotic Fantasy!”, catwoman Explains her understanding to Talia. “He’s just the stupid man I stupidly Love.” Knowing full well that Batman would betTalia’s for Justice.

Selina now disarmed grabs talia’s sword by the blade and sends her reeling with a head kick. Then stabs her in the rear shoulder, as she had done to Batman earlier in a poetic display. “You Mind Holding My Sword?” she says.

Catwoman makes it finally to Hollie.Her longtime friend, the Robin to her Batman, a girl that she spent so much of her life protecting. She knows why  Selina has come. And she asks if she will make her testify to clear her name. Talia is impressed with her grit and resolve. She is a worthy woman to Batman, and she may have changed her opinion of Bruce altogether. 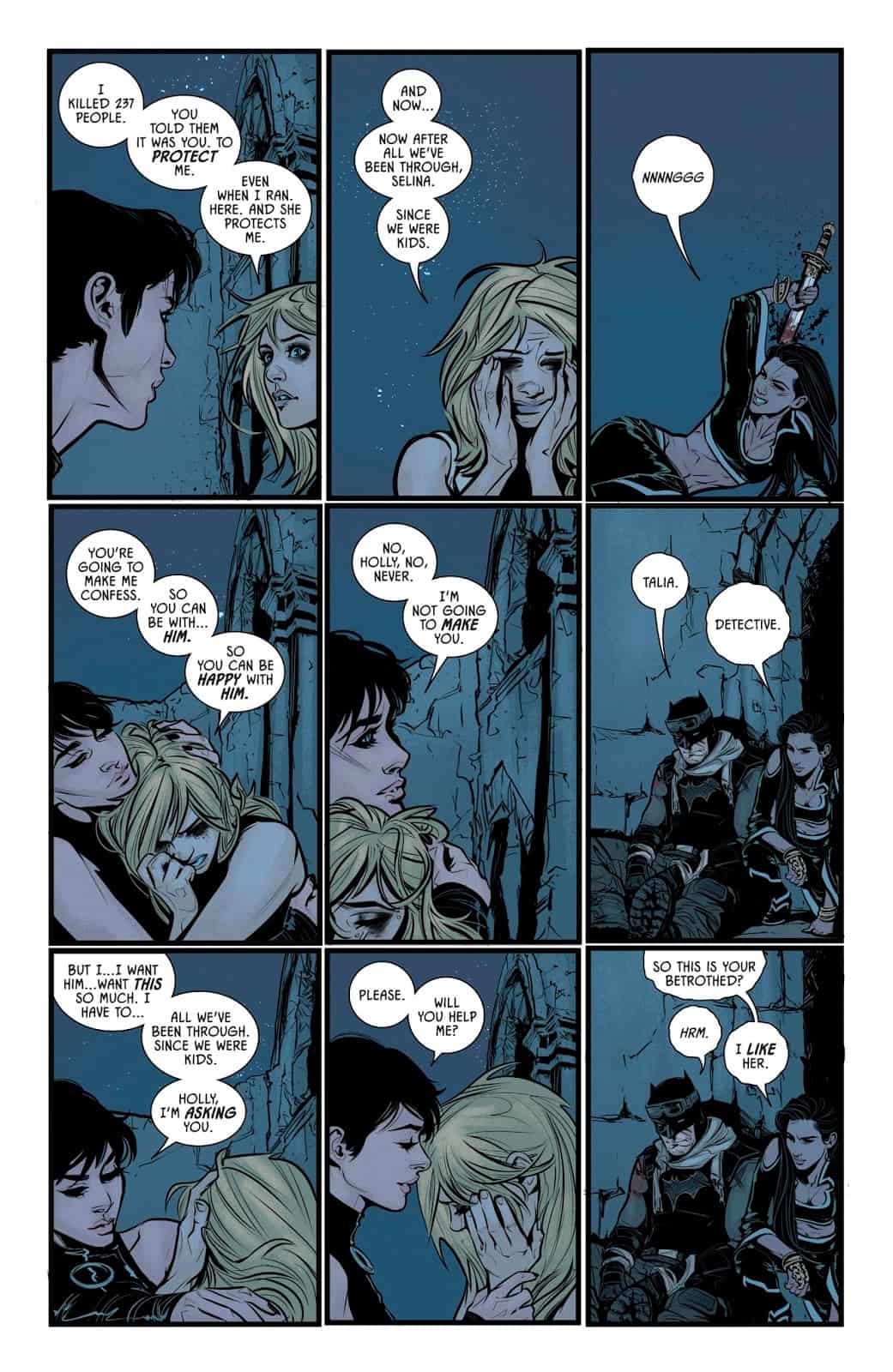 Outside the gate, Batman and Catwoman, stumble through the cave and are met by Damien and Dick. batman laments that he should have told them. And Damien asks his father “Father, Are you happy?”. catching Batman off guard he responds “I…I’m getting there.”Then they trek off into the Desert, as Damien remarks, “Did you happen to see Mother?” Selina, not missing a beat tells him “She Stabbed your Dad in the back. So I stabbed her in the back.”

Final Thought: I really enjoyed this three issue set. This really fleshed out the relationship that Bruce and Selina have, and gives us some insight as to the why behind it. Not only did we see a swashbuckling catfight (Pun Intended), but we got Nightwing and Robin becoming closer brothers as a result. This is not the traditional story that you would read in a Batman comic. Especially since the main Character was Catwoman for the most part. The story was a great bridge from the Joker Riddler war,and  King took the time to do what most Batman writers have missed in the past twenty or so years. He has humanized the icy facade of Bruce Wayne and Batman. I highly recommend picking up issues 33-35.