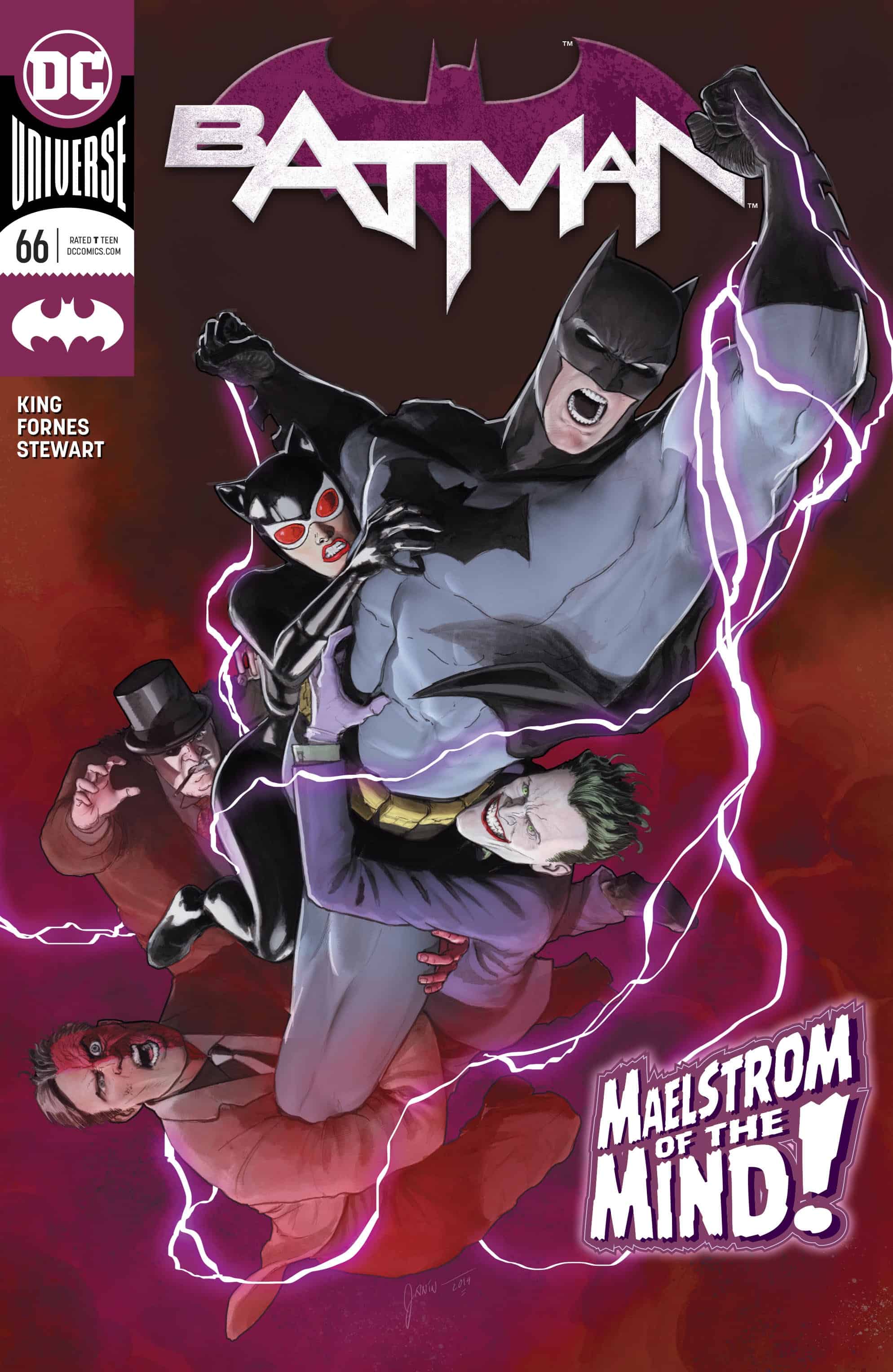 Batman’s figurative psychological representations of Catwoman and The Question dissect why she left Bruce at the altar. Don’t worry. It makes sense in context.

I know that Tom King’s current, extended run on Batman has been viewed as being a rather controversial topic among some fans. He frequently plays fast and loose with continuity (his playful references to the different versions of Bruce and Selena’s meet-cute is only one example of this) and his characterization of anyone who isn’t The Bat can sometimes be read as a little off. But it is becoming ever clearer that this is an intentional choice made by an intelligent writer, and not necessarily a flaw in the writing. 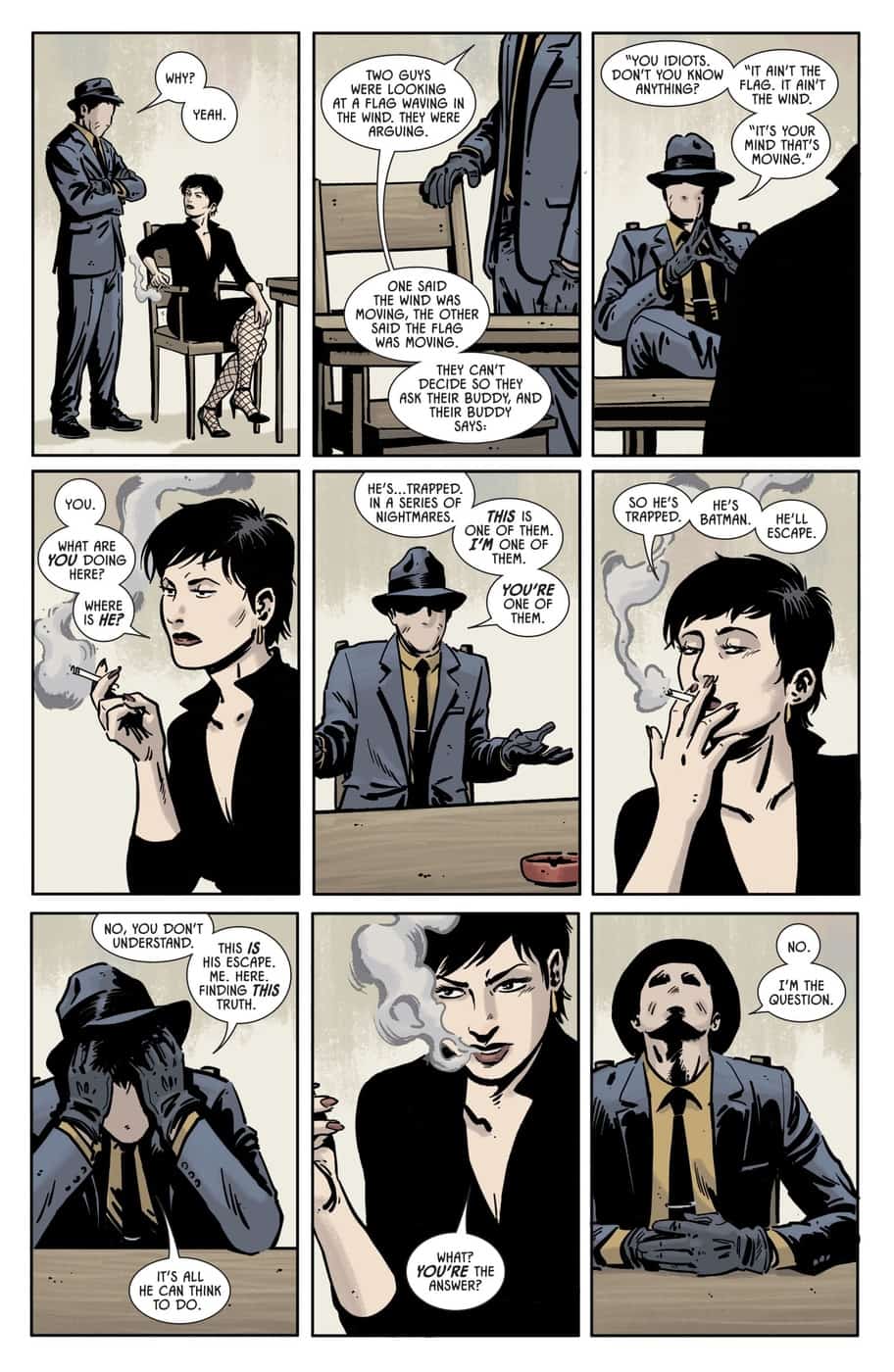 Yesterday, King announced on Twitter that he’d submitted his outline for the last 30 issues of his run, stating that his long story is finally coming to an end. One of the most remarkable things about this run (which, when it’s completed, will span a hundred issues) is that it is one single story. There are several arcs, many tangents, but they all feed into the same long stream. Tom King is giving is a complete psychological profile of Batman, like a portrait, spread out across a century of text. It’s the comics equivalent of a Jungian amanuensis: isn’t meant to be canonically accurate. 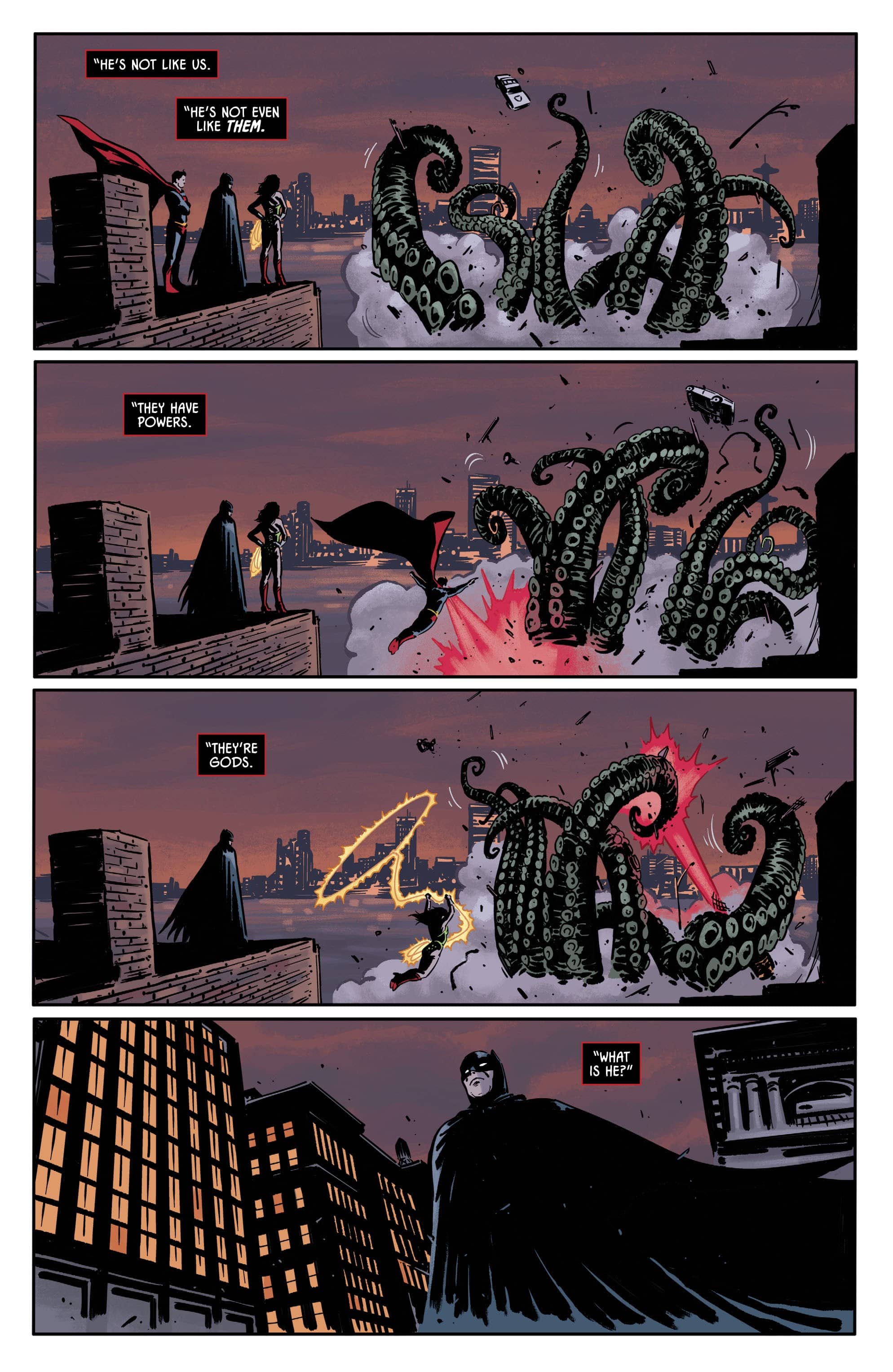 In this issue, we see The Question, Bruce’s inner version of him, anyway, interrogating his Anima figure (his take on Selena) in order to determine why she left him in the hopes that this knowledge would fix whatever’s broken inside of him so that he can become Batman again and find his way out of the maze the Nightmare Gas has buried him in. The ‘real’ Selena, the one who left him on that rooftop, would probably curl her lip at this unflattering portrait. She’d probably be better pleased by Jorge Fornes’s elegant, noirish art, which bathes the issue in a sexy, dangerous light. 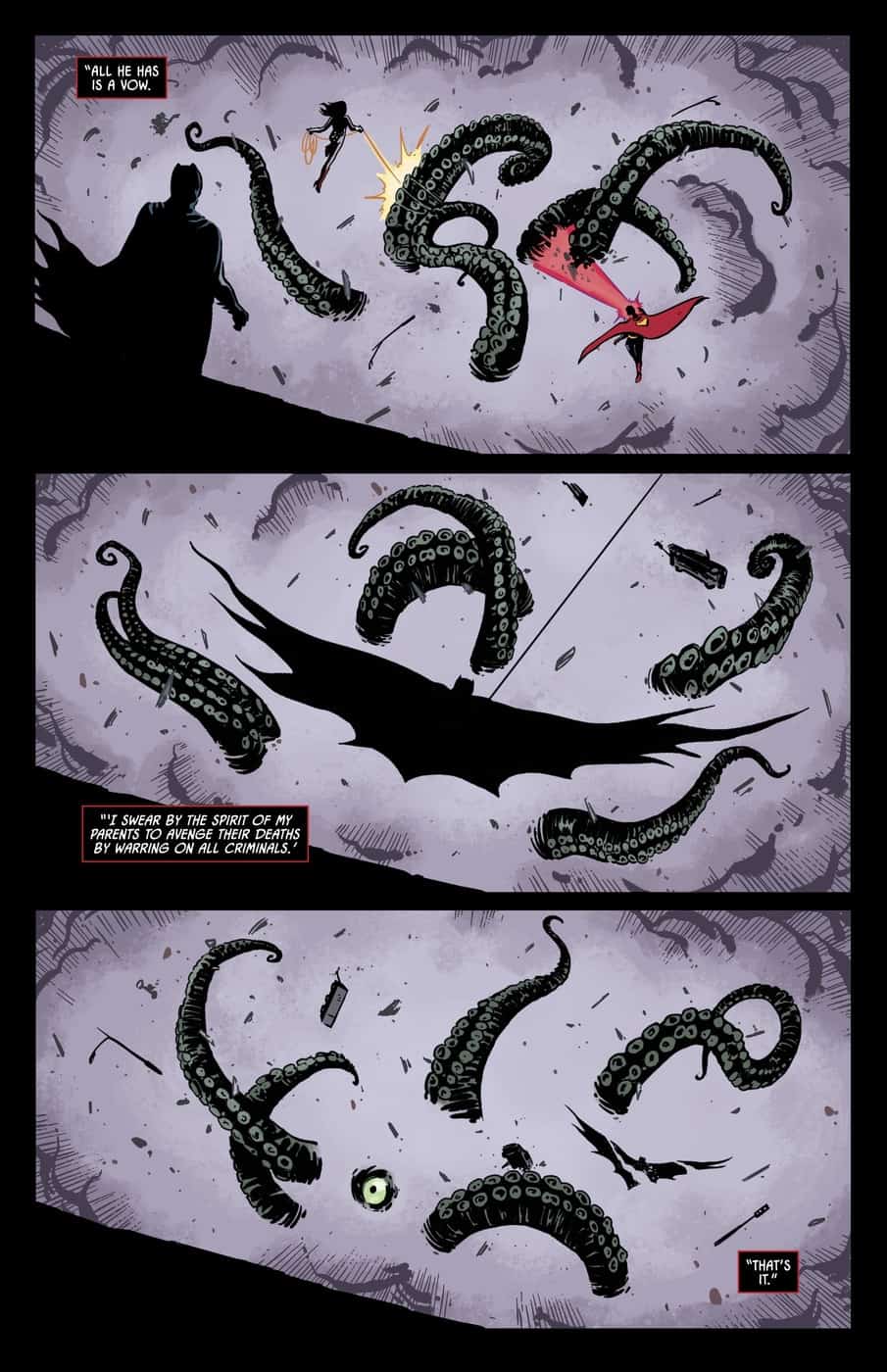 Neither Selena nor The Question read quite right. Catwoman seems flat, her motivation too unbelievably focused on Bruce. TQ is more unhinged and emotional than usual. But then the reader realizes that neither character is really there. Both TQ and The Cat are outcrops of Bruce, talking to himself, trying to work the problem out. 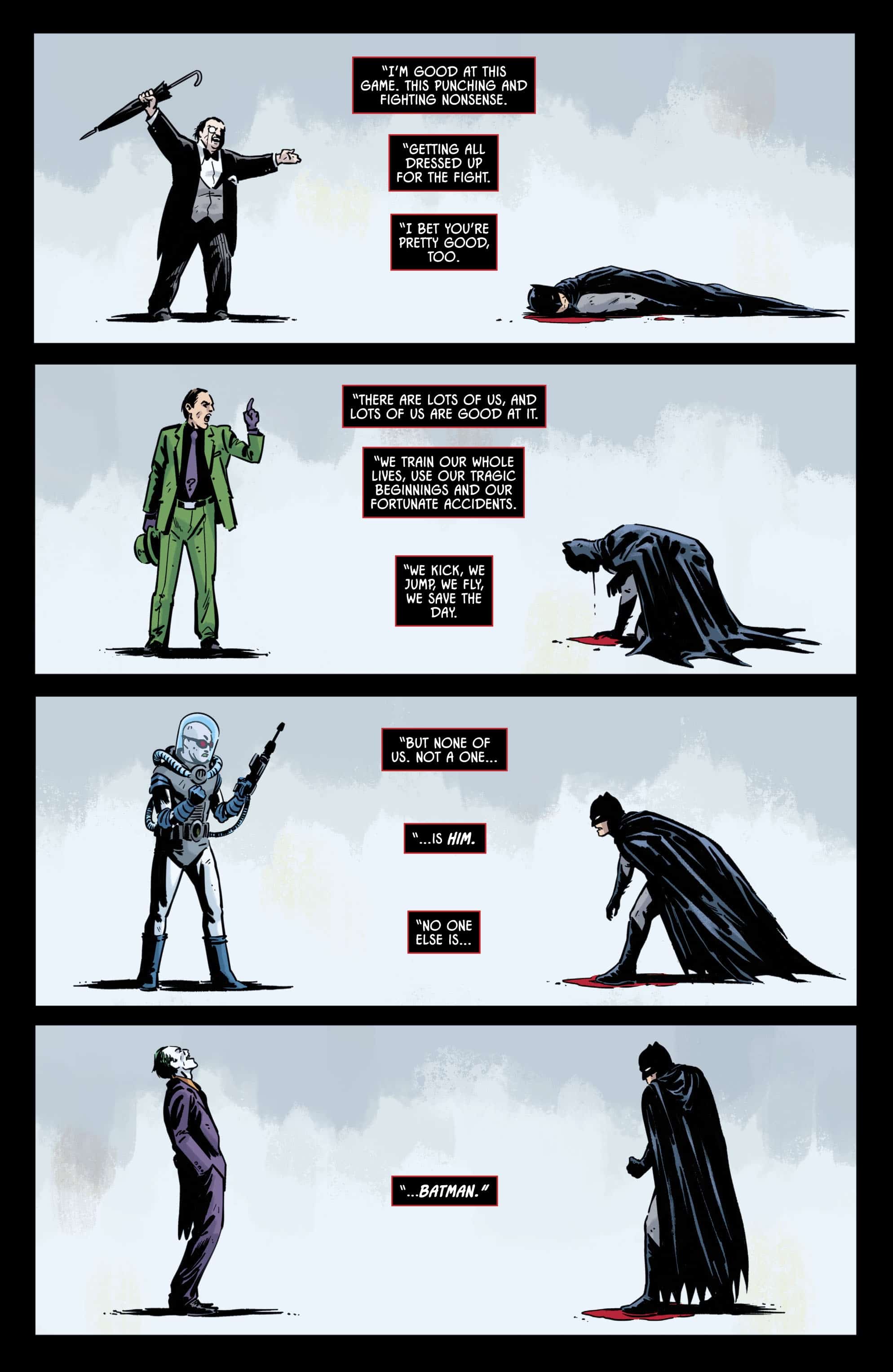 Over the last several issues (that God-awful Flash crossover very much excepted) Bruce’s nightmares have become more rooted, more rational as Batman methodically works his way back to consciousness. The psychotropic hideousness of the episode with Pyg led to the wish-fulfillment episode and when that one bled out we’re led to this blank white room. 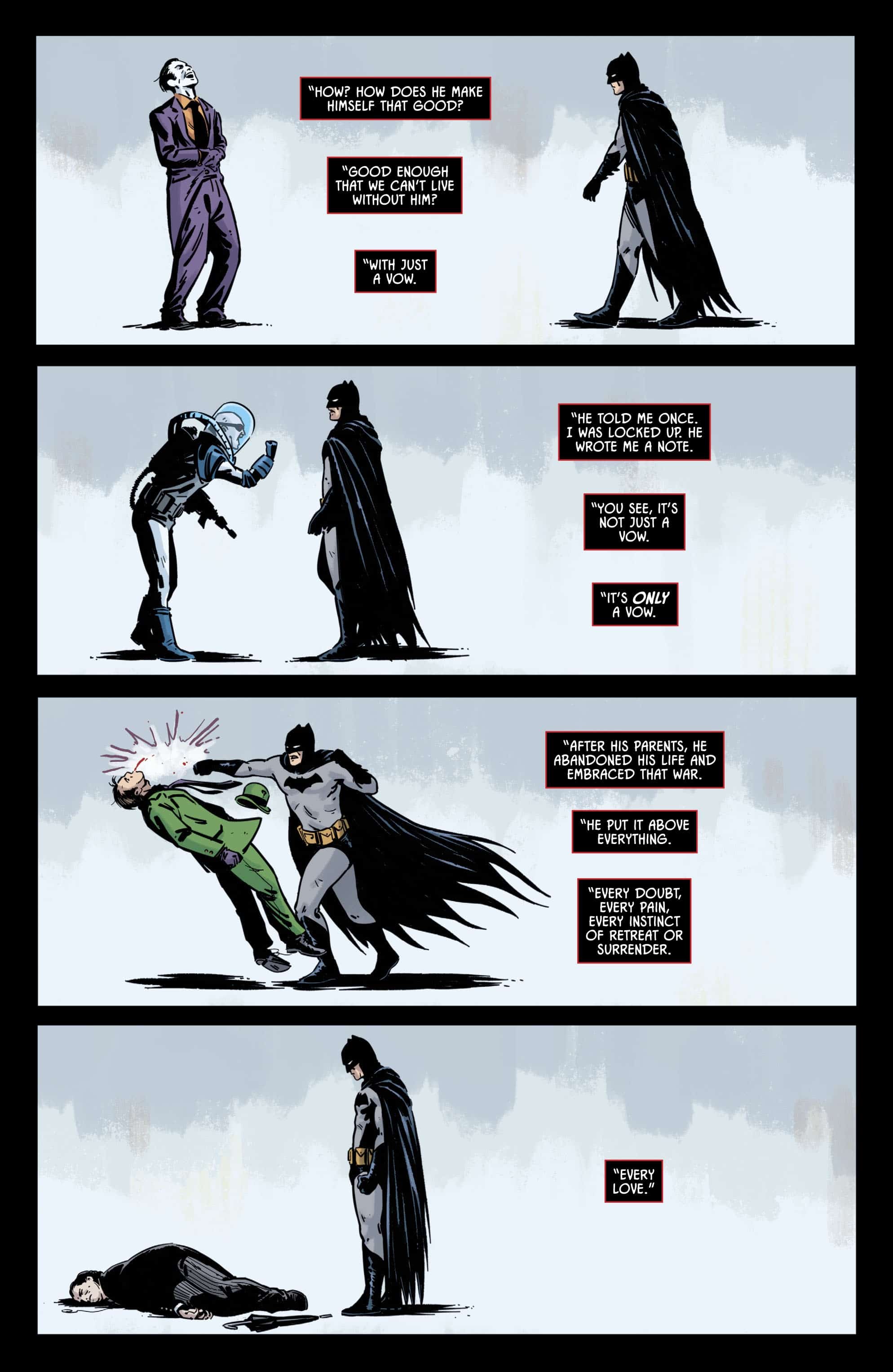 It will be interesting to see what happens next, now that Bruce is climbing back into the light again.

Elegant, deeply-psychological writing paired with deliberately noirish art and at least one giant tentacle-monster. What more do you need from a comic?