Batman #67: The Lyre of Orpheus 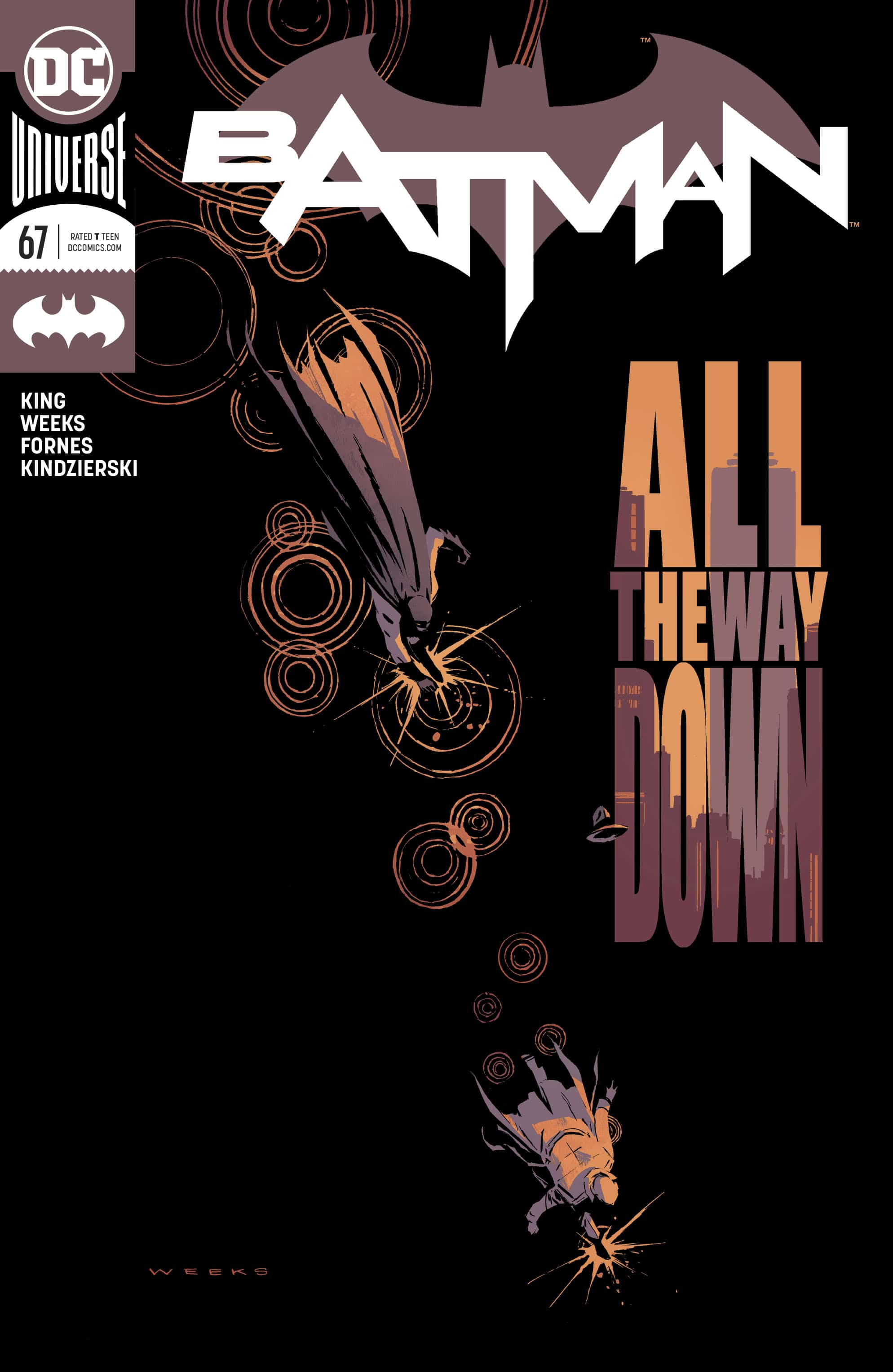 The Dark Knight pursues a masked figure from the heights of roof tops to the depths of the sewers. Who will catch him, if he falls? 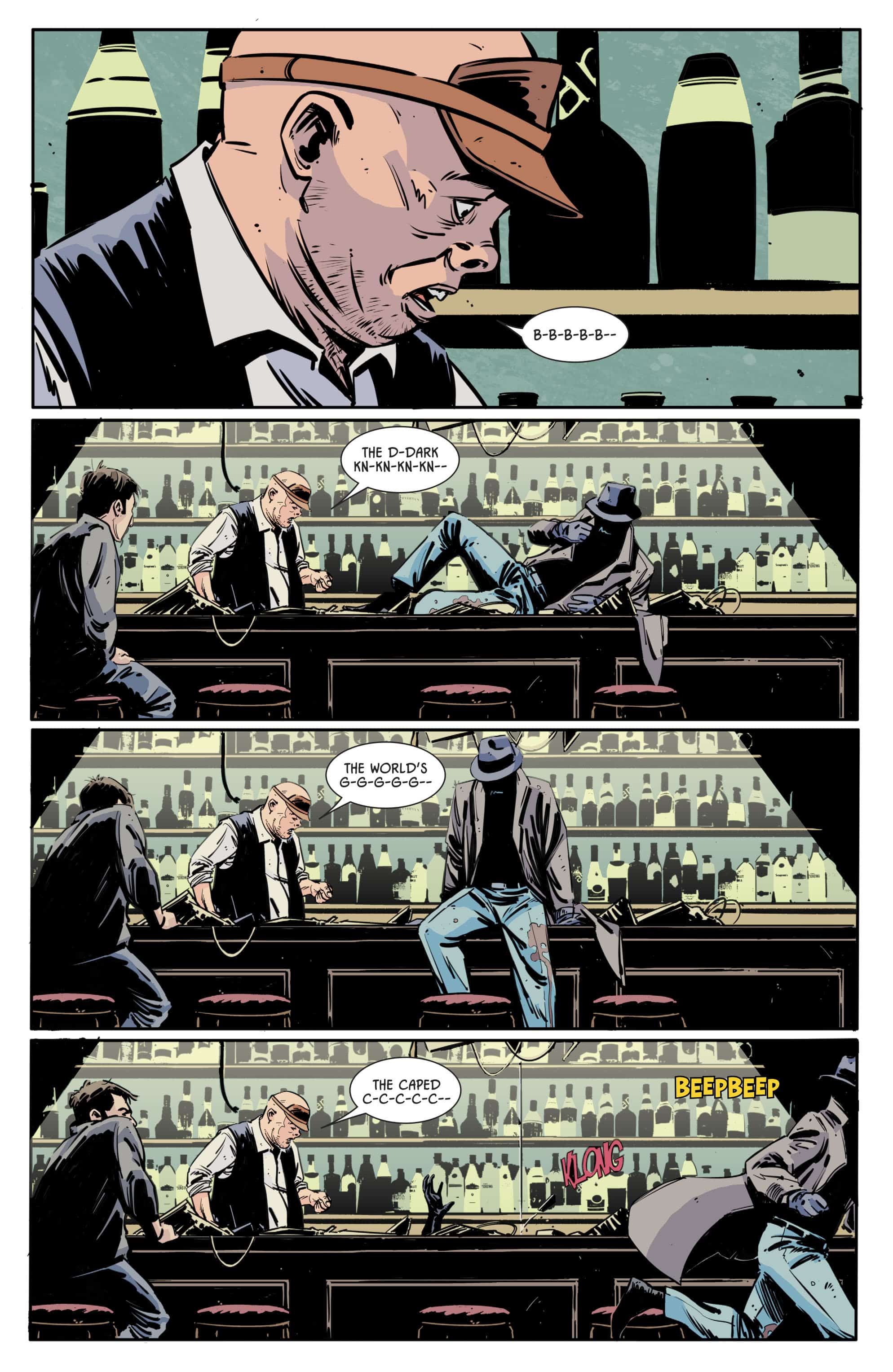 The nightmares that Batman has experienced over the last several issues have been refining themselves into coherent narratives. From the first (incredibly disturbing) encounter with Pyg to the dialogue between Bruce’s inner representative of Selena and The Question, these dreams have been gaining a revelatory coherence as Batman has come ever closer to untangling the central problem of himself. The previous issue was largely focused on two aspects of Bruce’s personality engaged in a conversation with and about themselves. It was situated in a white room (bland as the inside of a skull) and the best part of the art was dedicated to capturing the nuances of the figures’ expressions. This might have risked alienating the audience if the subject was just a little less interesting. But The Bat, as an archetype, is endlessly fascinating. Luckily for us. 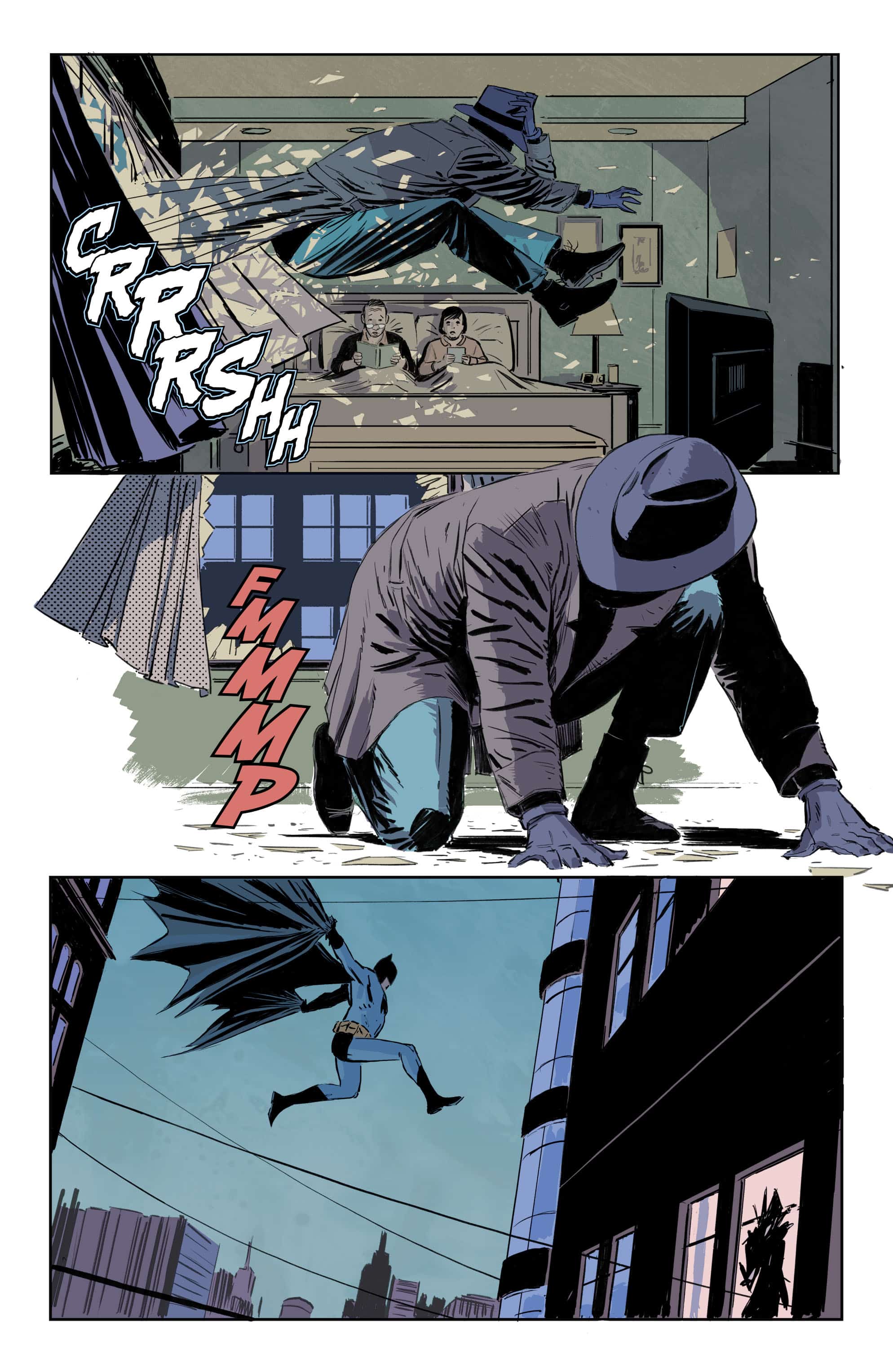 In many ways, this issue was the exact inverse of the last.There is hardly any dialogue (beyond a few telling stutters) and far from trapping us inside a single, egg-like room, the panels lead us on a chase which runs from the dizzying rooftops, through the semblance of middle-class security, down to the streets (where rationality gives way to violence) before finally plunging us into the depths, the unconscious sewers, where there be monsters and the mocking, elusive quarry can finally be unmasked. In dreams, a masked figure (which is either chasing the dreamer, or being chased) often represents an aspect of the dreamer’s personality which the dreamer would be more comfortable denying. Catching this dream-figure is always a revelation. I will not spoil the surprise by revealing who is on the other side of that mask, but if you know the character at all you can probably make an educated guess. 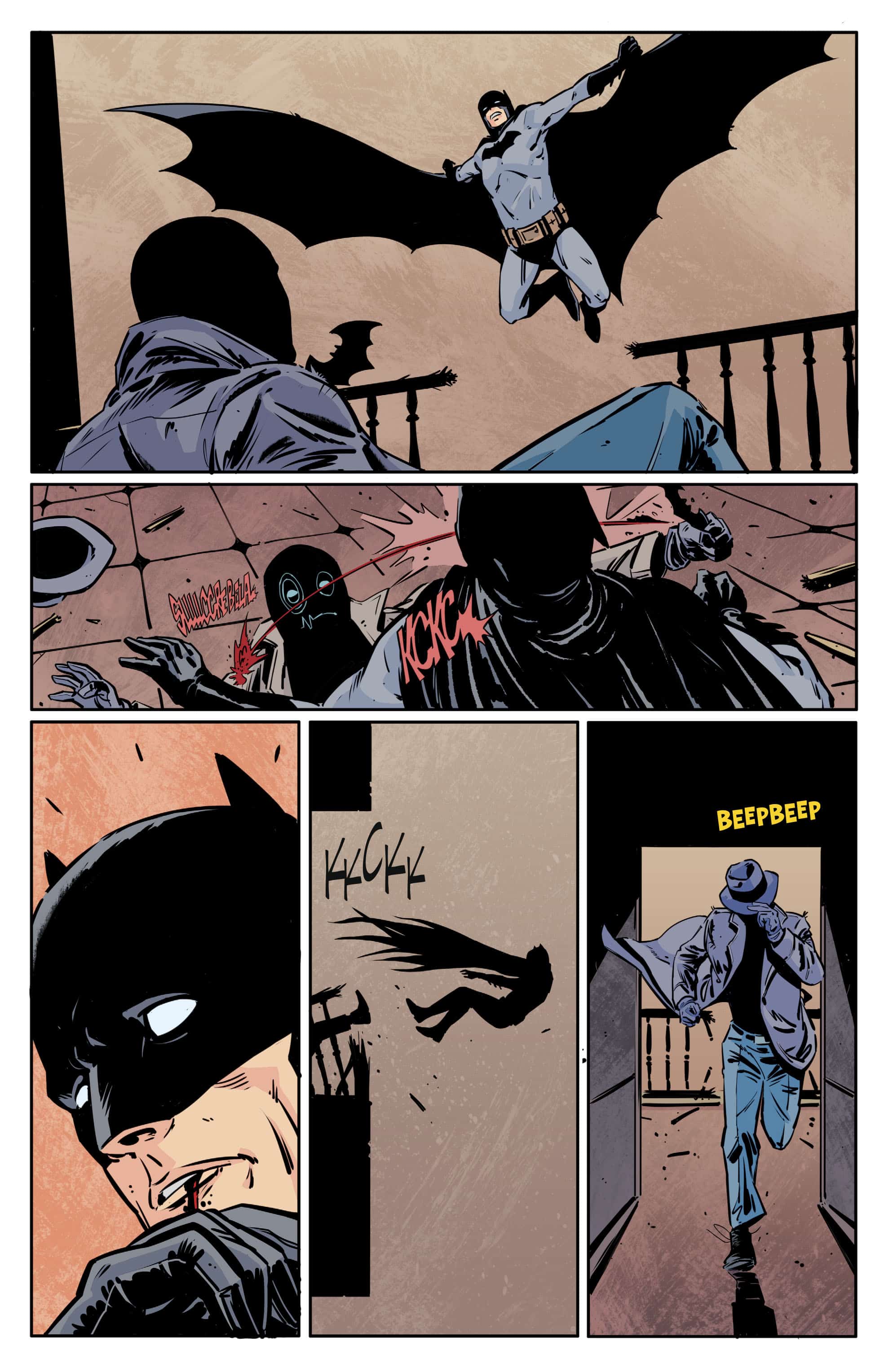 It’s pretty clear that the descent that Batman makes into Gotham (as he says, he is Gotham) is meant to represent the dreamer peeling back the layers of his persona (unmasking himself) in order to reach an essential, highly personal truth. The sequence is extremely successful. The reader is led to the places where they need to go and the punchline is delivered. A lot of this success is due to the writing, but the script would not be anywhere near so effective without some absolutely magnificent art. Indeed, a lesser artist would have absolutely ruined this issue. Every page, every panel, is loaded with details which help bring the moment to its climax. There are subtle spirals everywhere, elongating space, bringing infinity into two-dimensional paper. Batman falls, or leaps, into a night that is tinged with a sense of the eternal or plummets into a stream which seems to spread until it engulfs him like the womb of the world. Lee Weeks is an absolutely brilliant artist and even if you have no interest in the story that King is telling, or the ways that he plays with narrative and form, you’ll still want to pick this one up for the visuals. 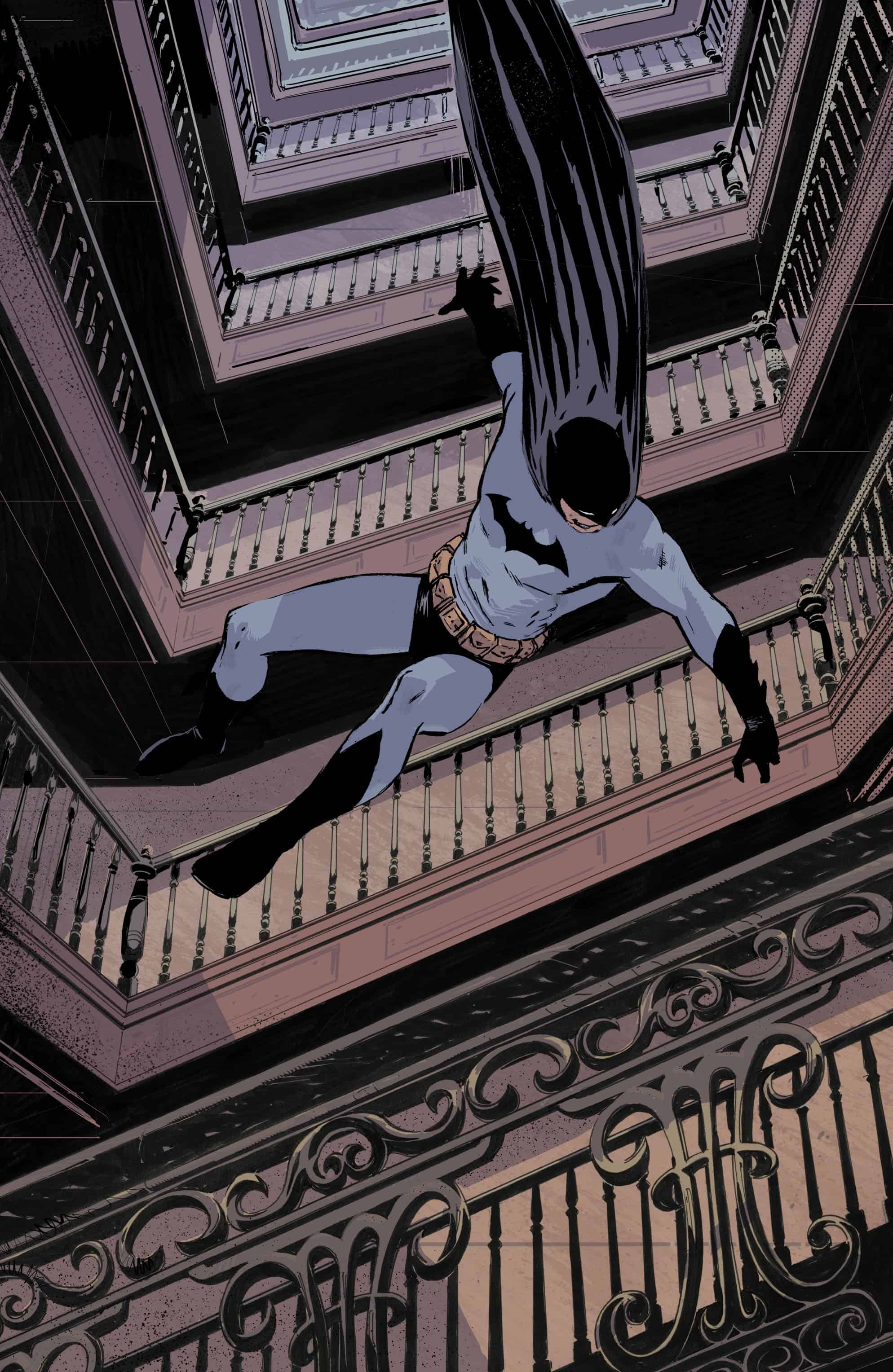 In short, this is an issue that everyone would do well to purchase.

The art in this issue is absolutely stunning. The dialogue is next to non-existent, but the theme is remarkably complex. Even if you don't approve of King's long (and I would say extremely successful) experiment with narrative, you are going to want to have this in your collection on the strength of the visuals.

Batman #67: The Lyre of Orpheus