Thomas Wayne leads his son (and the corpse of his wife) across the desert to The Lazarus Pit. Will his attempted Resurrection go as planned?

This issue was a powerful psychological examination of a traumatized mind. The readers know what Bruce does not: Thomas became Batman, in his world, after the death of his son while Martha twisted herself into a version of The Joker in an effort to slake her unmitigated grief. It must have been baffling, for Batman, to see his long-mourned father teaming up with Bane in an effort to ‘break’ him. Indeed, the question of why he was doing this was one of the major hooks dragging readers through this convoluted narrative. Now we have the answer.

Luckily for us, it is a good one. 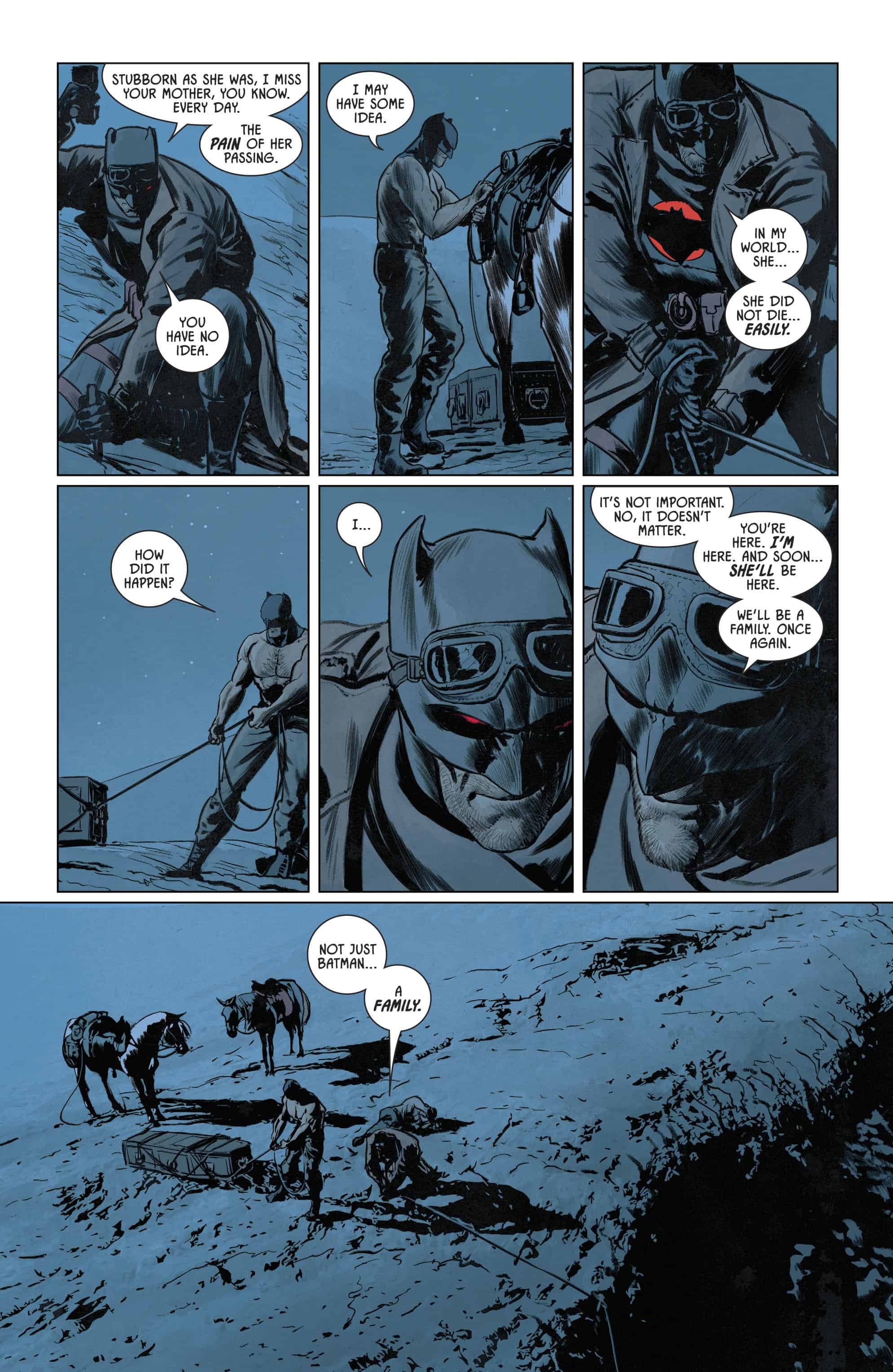 Thomas craves stasis, a return to a lost status-quo: Himself as the patriarch of a powerful family; his wife as a pliable helpmate, standing (prettily) by his strong side; Bruce as his son, gentle, delicate, a little over-sensitive, but absolutely submissive to his father. The fact that Thomas was willing to go into an alternate reality, torture his child into submission, and exhume a gentler version of his wife in order to achieve this dream is a testament to exactly how psychologically broken he is.

Thomas’s monologue also allowed the readers to contrast his view of what it means to ‘love’ his son with Selena’s take on the same subject. Thomas views his love as something which gives him the authority to utterly control (and define the identities of) the people in his life – including preventing Bruce from being Batman. Selena, on the other hand, sacrificed her own happiness to give Bruce what she thought he needed in order to remain more fully himself. She was wrong, too, of course. She didn’t take him at his word. But she was less wrong than his father. 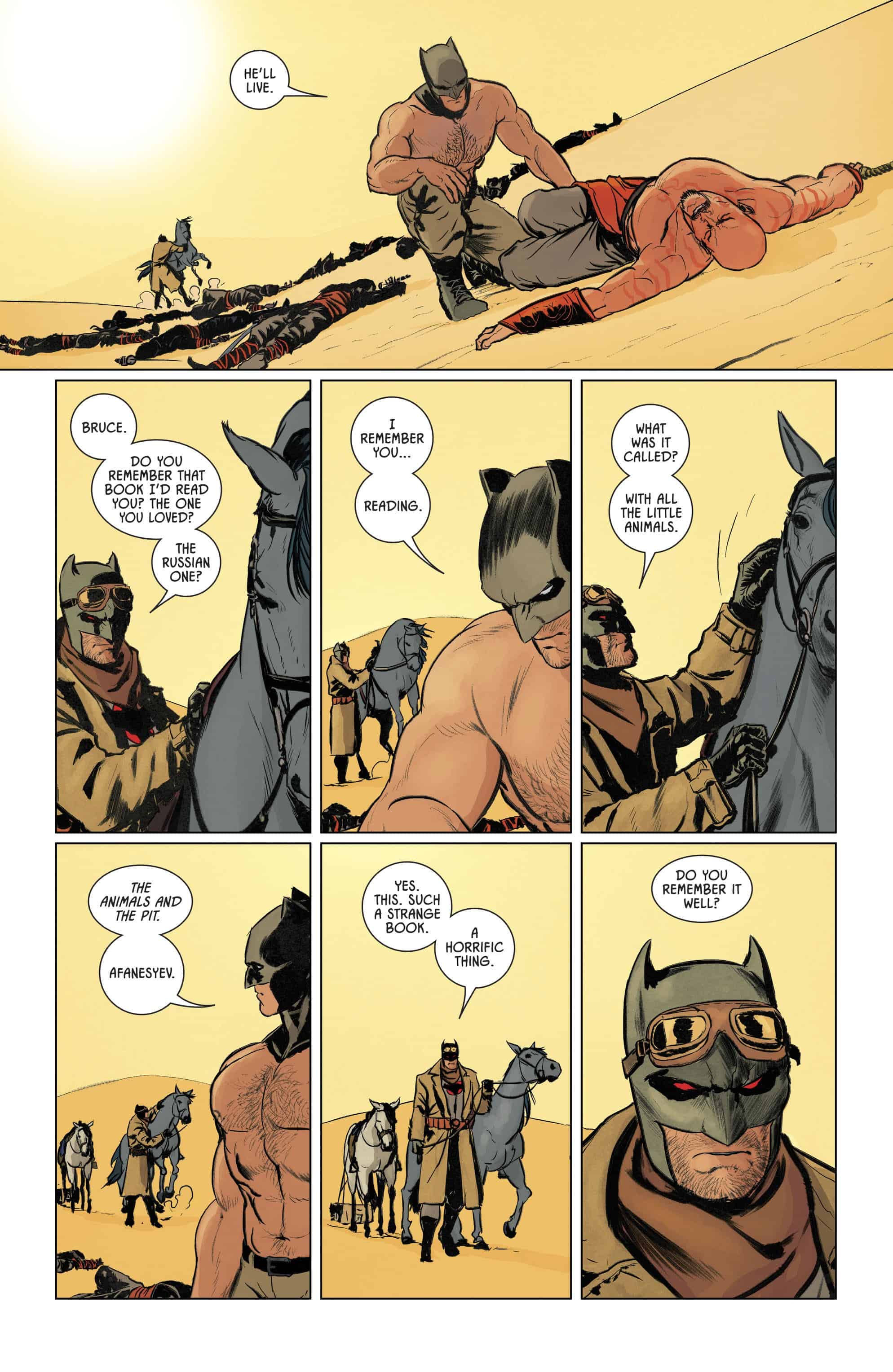 This was a fascinating story to read, and the execution was highly enjoyable. It’s clear that King is playing the long-game with this story. The conversation between Thomas and Bruce in the desert, the one analyzing the incredibly disturbing children’s story about the animals in the pit was exceptionally well-rendered, allowing the readers to see how the same story, the same context, can be read very differently, depending on the audience. 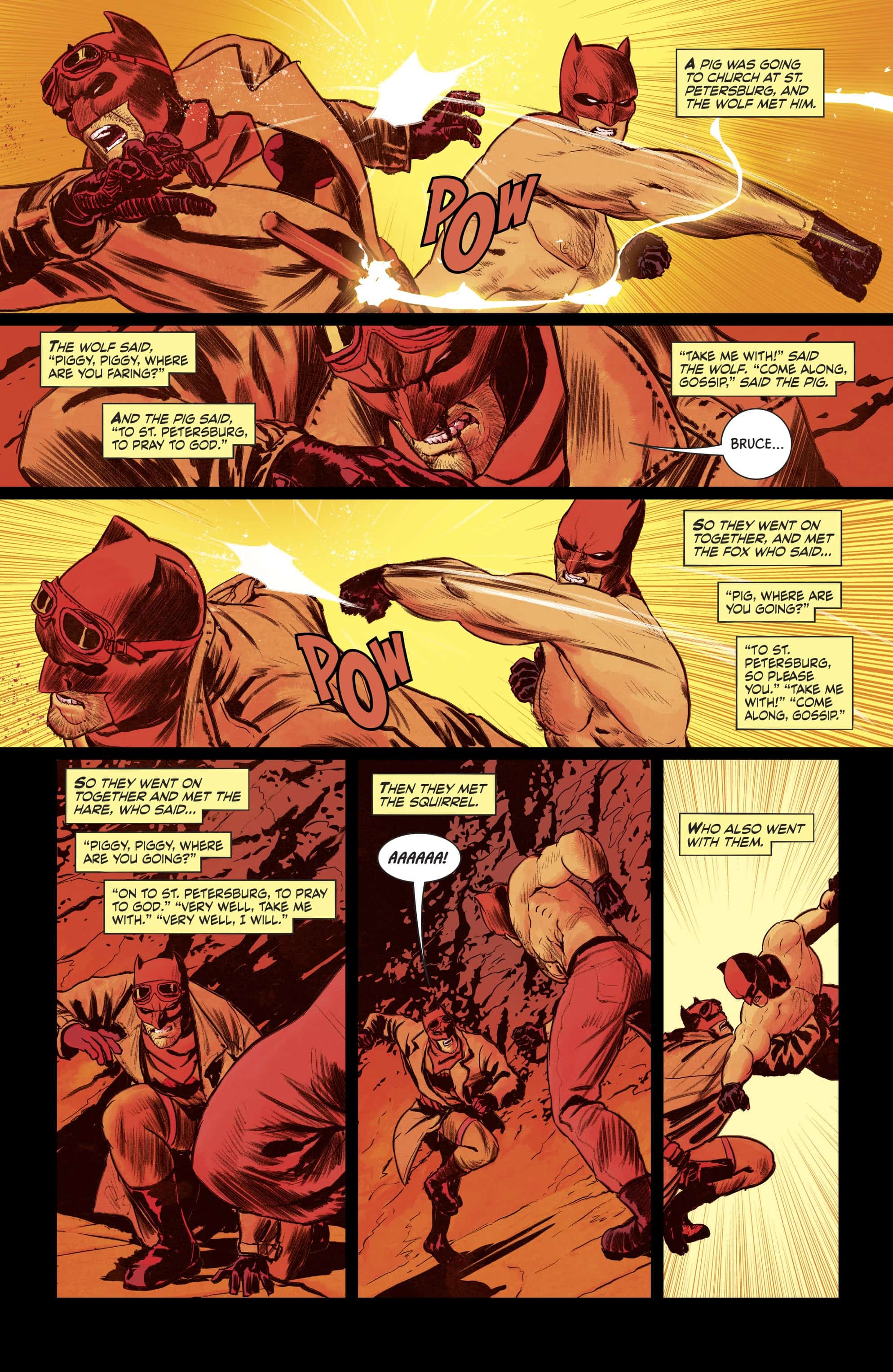 The art in this issue was absolutely amazing. Janin’s line-work is nuanced and delicate enough to render subtle facial expressions and cinematic enough to convey an epic sense of peril. The shifts in the color palate reflected the emotional temperature of the narrative, shifting from blues and greens (during Bruce’s disenfranchisement) to hotter yellow while the conflict between father and son deepened, before finally bleeding into red during the final confrontation in The Pit.

Of course, the story ends of a cliff-hanger. I’m not going to spoil it here. You’ll want to read this story for yourself.

Balancing good psychology with roaring action is no easy task, but it is one which the team of King, Bellaire, and Janin have absolutely knocked out of the park. This issue more than redeems the somewhat weaker passages we had to slog through to get here.