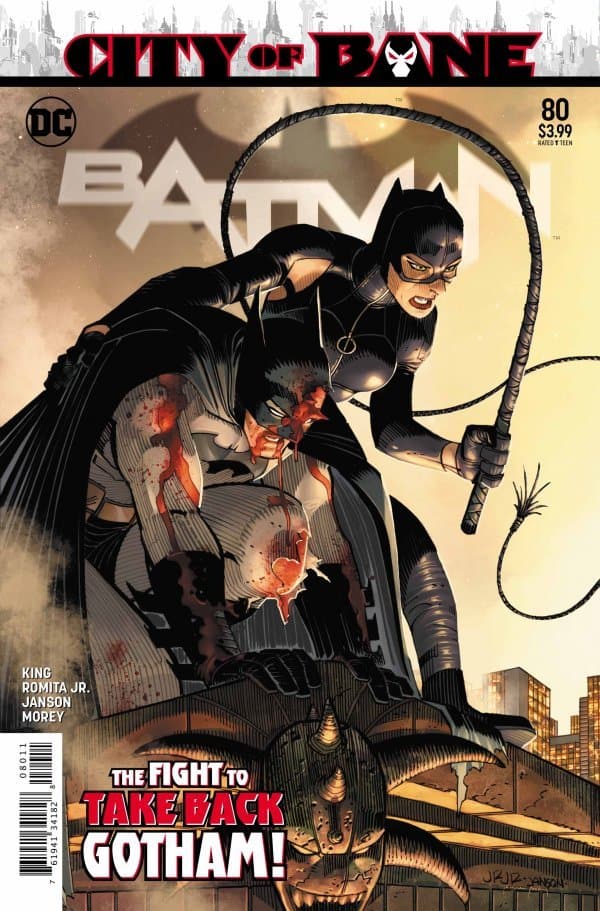 Batman infiltrates the City of Bane, and his father has the sights of a gun held firm against the forehead of his son.

This is one of the best issues of Batman in months. The pacing is the perfect balance of plot and action, shot through with dialogue that does nothing but tighten the screws of its narrative tension. I was especially impressed with the design and layout of the panels. Romita Jr’s pencils added another layer of anxiety to the story.

This is Batman at his best, methodically, implacably taking down criminals (without killing them) while something even more terrifying lurches, barely seen, to the centre of the stage.

By far the most interesting thing to see in this issue was the palpable conflict occupying the personage of one Thomas Wayne. This is no cardboard villain. Like all the best baddies (save maybe one) he is convinced of the rightness of his actions. He is absolutely incapable of seeing that he has victimized absolutely everyone around him, including the person who (it seems) he has come to love most.

His scenes with the dying Gotham Girl were heartbreaking and sincere. It’s clear that he loves her, as he would (as he tries not to) love Damien. And he cannot see that Bruce is far less responsible for her illness than he is himself.

Of course, Bruce and Selina are betting that it won’t.

As always, King interspersed the action with an appropriate literary quote. Two quotes, actually. Plato and Aristotle both taken grossly (if effectively) out of context, and served up to us during a fight.

As for me and my house (speaking of out of context quotes) I’m just glad that this story has grown so absolutely into its legs. I cannot wait to see how it comes out.

Literary wit, astonishing action, and kneebuckling art all abound in this issue. What more could you possibly want?