Batman and the Outsiders #6: A Little Shiva Goes A Long Way.

Batman and the Outsiders #6

So after Black Lightning and Katana finally get a win after 5 issues of the team getting caught with their pants down, the script gets completely flipped on them. Old Man Al Ghul reveals his plans to destroy Batman and his gang go a lot deeper than just playing principal to the "rival school".

Exposing Batman's appearing lapses of trust of the team, he splinters it in ways that didn't seem possible before. But more over than that a new challenger has entered the game: LADY SHIVA!

What follows is the most impressive fights we've seen so far as we're handed an amazing reminder of just how great an adversary Lady Shiva really is. After opening up several cans on Duke and Cassandra like Stone Cold punking MacMahon back in '98. The team is left defeated, spirits aflame in a mixture of frustration and outrage that will undoubtedly lead to some kung fu laced insanity when Orphan vs Shiva round 2 pops off. 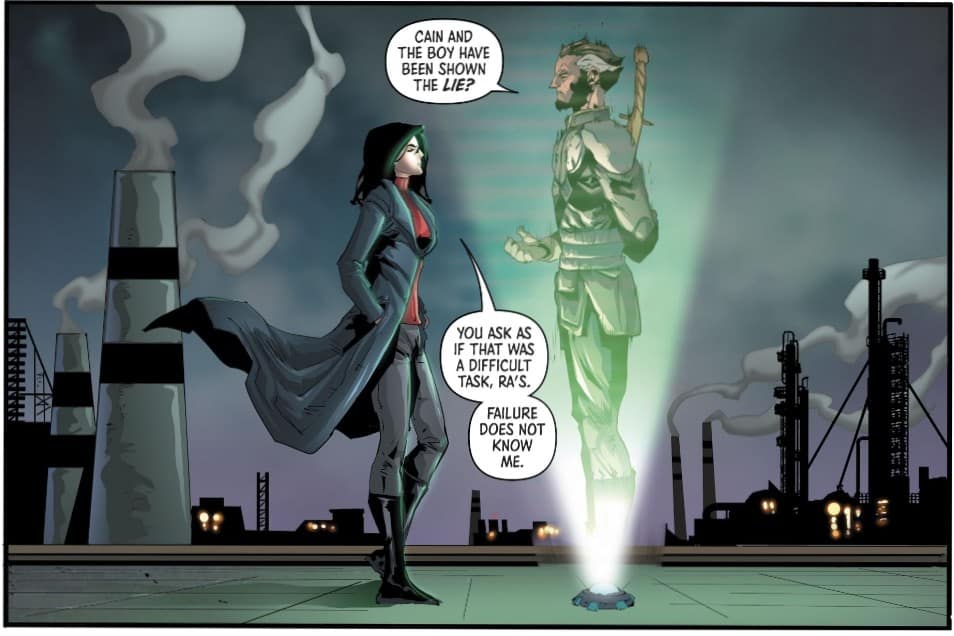 Literally the most refreshing/enjoyable issue of this book to date. If you’d told me the introduction of Lady Shiva alone would increase the quality of this book so much in just one issue….well I love Lady Shiva but I’d still have looked at you sideways. The bitter blood between her and Cassandra Cain reemerging is off to a fantastic start and all it took was for Lady Shiva to pound Cain and Duke into the ground.

I’ve noted before that there’s a significant difference between the filler in these issues and when Bryan Hill is clearly in the Zone. These moments usually happen between Black Lightning and Katana but this go around Lady Shiva stole the show no question. Hill clearly digs the character and has a strong grasp on what makes her so endearing to fans because her characterization is spot on. The perfect blend of exceedingly arrogant but also so skillful you can’t even justify arguing against her bravado. While there is some jarring aspects to the book shifting gears so hard from the original story arc into this “finale” that’s really just saying “okay whatever on the fake Cable stuff let’s get it going right this time”, the overall experience is all the better for it.

Lady Shiva dropping the line “Failure doesn’t know me” sums up everything that makes this issue so sick. Hands down this one outing is worlds better than the previous 5 put together. I’m not sure what happened here if Hill was just phoning it in waiting to get to this point or he just ate an extra big bowl of Wheaties while he wrote this script but this right here was what I was expecting from day one not just from my beloved Outsiders franchise but also from Hill himself who is already shown himself to be a quite capable writer in the past.

Not much else to say here cept if you already dropped this book or were waiting to pick it up #6 is where you wanna start or pick it back up. This was the much needed shot in the arm this run was hurting for up til now.

Batman and the Outsiders #6: A Little Shiva Goes A Long Way.