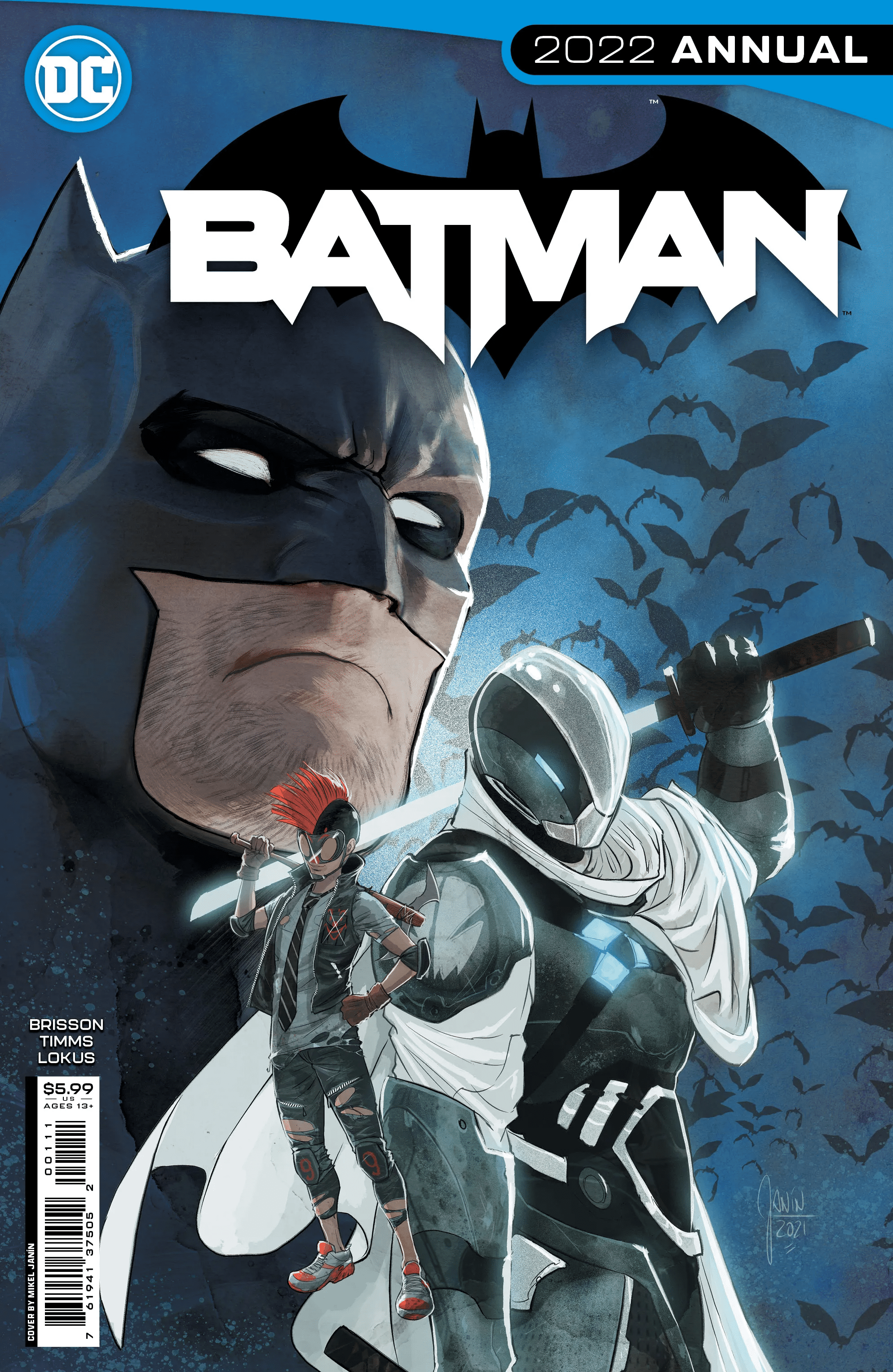 In the wake of his encounter with Lex Luthor’s bizarre Batman-expy training program, Batman decides to leave Batman Incorporated in Ghost-Maker’s capable hands. Their first mission? A trip to the village of Kazbek in Chechnya, the site of one of Luthor’s abandoned Batman factories. The residents have recently gone radio silent and the new Batman Incorporated must investigate why, all while navigating the tense relationship between the veteran members and their new – and difficult to deal with – leader.

It’s been about a year and a half since Minkhoa “Ghost-Maker” Khan made his debut in Batman #100, and if you’re anything like me you probably just thought “Wait, only a year and a half? Really?” Yes, really… but if that’s you, it can be forgiven because he sure has been up to a lot in that time. After a stint as Batman’s co-guardian of Gotham that lasted through the end of co-creator James Tynion IV’s run, he took on the responsibility of “raising” Bao “Clownhunter” Pham into a proper crimefighter and the two departed Gotham to engage in whatever new adventures called them.

New characters can be hit or miss, and whenever their primary writer moves on, fans may be justifiably concerned that the character will disappear or fall victim to poor writing. Thus far characters like Ghost-Maker and ClownHunter have been fortunate to avoid either fate… particularly Ghost-Maker, whose barb-filled frenemy relationship with Batman has not only continued going forward but it has also been integrated into the official record of Bruce Wayne’s training time (see Batman: The Knight).

Instead, he’s become the new leader of Batman Incorporated – a decision foreshadowed during Ghost-Maker’s earliest appearances when Batman reminisced about a meeting between them during the setup of Batman Incorporated. At the time, Bruce attempted to recruit Ghost-Maker into leading the team with him, only to be sharply rejected. Apparently, the idea stuck like a splinter in his mind since he promptly tracked down and attacked every individual member.

That history is only one of the reasons that Batman Inc’s members are skeptical when Batman first announces that he is turning the operation over to his friend. More than that, Ghost-Maker’s abrasive personality and ruthlessly pragmatic decision to split the membership into local and international divisions – with an explicitly delineated status divide – proves a hard sell for them. To make things worse, the split tears apart teammates and family members, leaving even members of the more elite international division on the edge of quitting.

Any decisions along those lines are put on hold, however, due to a mission arising immediately after they’ve been left to their own devices, sans Batman.

Those who have been reading Williamson’s short Batman run will remember the premise behind the four-issue Abyss arc but as a quick refresher, the arc revealed that Lex Luthor had been trying to create his own Batman Incorporated equivalent, with the arc villain, Abyss, being one “graduate” of that program. Now Lex has abandoned that project, leaving those programs to struggle along on their own, or fall into nothing. One such program was situated in the village of Kazbek in Chechnya…. which has now ceased all communications with the outside world. Batman Incorporated’s mission here is to discover what happened to the village.

The answer begins to present itself almost immediately upon their arrival when they stumble on a group of terrified villagers hiding from the local McBatLuthor, Gray Wolf. With villagers disappearing and Gray Wolf seemingly out of control, the pertinent questions are, what has happened to the villagers and why has Gray Wolf been making them disappear?

The answer seems obvious initially, but things may not be as straightforward as they appear, and soon the team finds themselves fighting simultaneously for and against the very people they were sent to help.

Writer Ed Brisson has crafted a story designed to sell both the team and the reader on what otherwise may seem an awkward fit. As a “getting to know you” mission for Batman Inc and their new leader, Batman Annual 2022 works well. Ghost-Maker is given the opportunity to earn the team’s trust by proving that, despite his abrasive personality and arrogance, he is nonetheless a reasonable replacement for Batman in both skill and judgment… and frankly a team that has worked with Batman in the past is likely pre-conditioned to be able to deal with difficult personalities. At the very least, they can trust that Ghost-Maker is as committed to justice as any of them… though the reason for that commitment is a bit, shall we say, sus.

Neither the individual members of Batman Incorporated nor ClownHunter feature as prominently here as does Ghost-Maker, but we are given enough to get a sense of their individual personalities and situations. The tug of war between Ghost-Maker and his new… protégé? Sidekick?… ClownHunter is amusing and reads like the natural interplay between the two personalities. This is all pretty important, given that the annual is, as revealed on the final page, a lead-in of sorts to a new Batman Incorporated series coming in the fall.

John Timms’ artwork is detailed, dynamic, and reminds me just a little of Jim Cheung around the edges which is definitely a compliment. He also has excellent panel “timing,” particularly in the clever two-panel beats which he uses to great effect. This is hardly surprising though – he did a wonderful job on Superman: Son of Kal-El, and his work here is just as vibrant and strong.

I’d also like to mention that Clayton Cowles is killing it with the lettering here – the section titles are bold, imposing, and yet somehow meld beautifully into the artwork.

It’s all very exciting to me, which is impressive considering how little I’ve cared about Batman Incorporated in the past. While it’s unclear whether this is the same team that will be taking on the series proper, I’m going to assume it is for the sake of my own internal hype machine.

It's fun, it's exciting and it's excellent at setting the stage for what's to come. If you’ve been wondering just how Ghost-Maker became the leader of Batman Incorporated – and what made them trust and follow him – this is the story you’ve been waiting for.