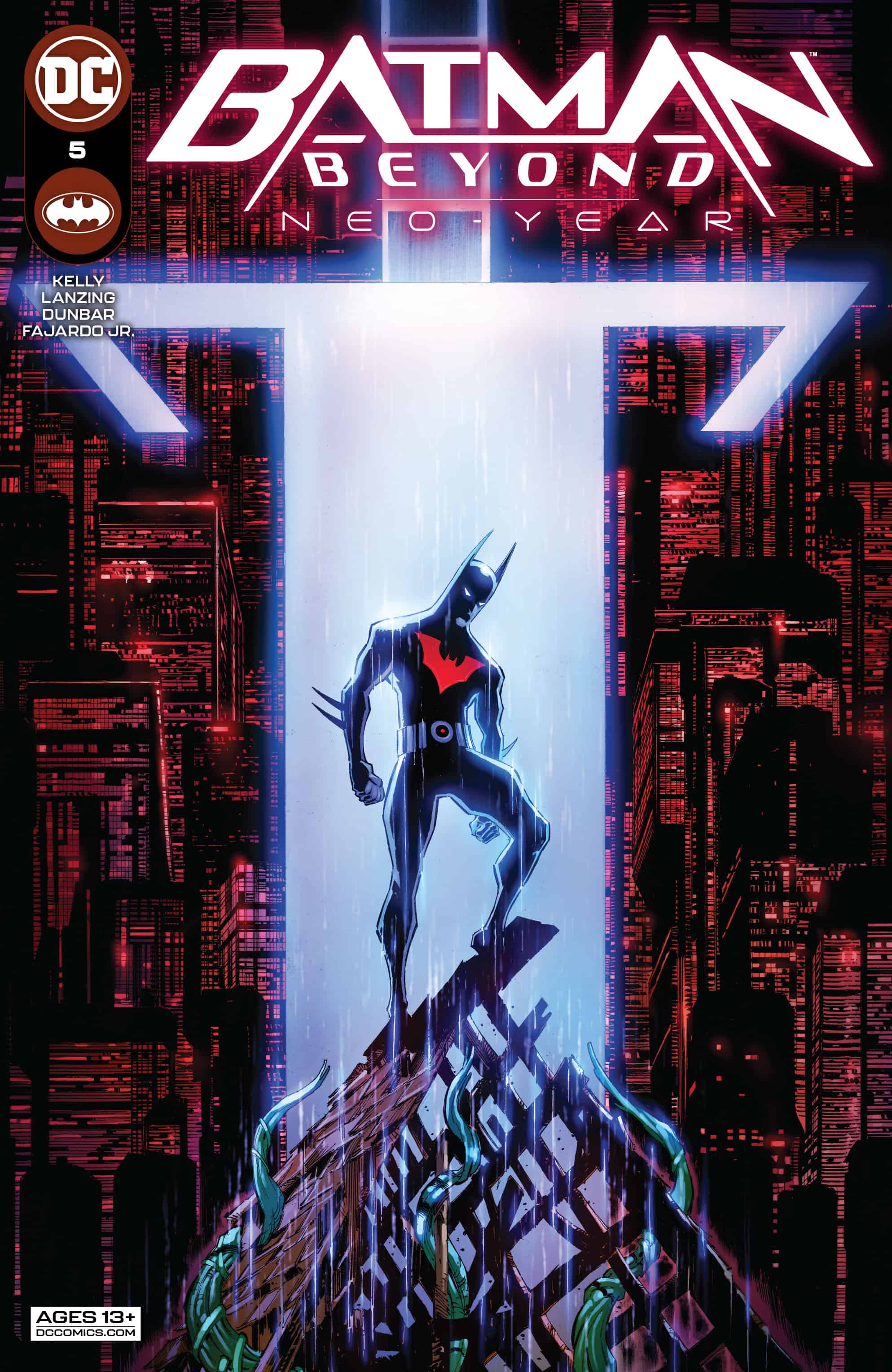 YOU CAN NEVER GO HOME AGAIN! Neo-Gotham and its Sword have compromised and gravely injured officer Beam Boonma. To save her life, Terry McGinnis will bring her to what remains of the Batcave, begging one of his newest foes, Gestalt, to help him. Terry has one last chance to save Neo-Gotham from itself. He'll have to take everything he's learned in this year without Bruce and redefine the legend of Batman once and for all.

Batman Beyond as a property has been a fan favorite ever since the animated series was released. So I was very excited to have the opportunity to review this comic (and full disclosure, I haven’t read the previous issues yet). I have to say that reading this issue made me fall in love with the world of Batman Beyond all over again.

This issue is the classic turning point before the climax of the story. It was really interesting to read and learn about how Bruce is still guiding Terry in his mind and how he isolated himself from society in the Batcave for three months while he waits for officer Boonma to be saved by Gestalt. During this time, he still trains and keeps his mind and body sharp, but I love the little details that Kelly and Lanzing added to make it realistic (e.g. how after not interacting with anyone for such a long time, he had to be reminded to put his mask back on before Gestalt revived Boonma to protect his identity). The issue brought in a lot of tension, drama, mystery, and suspense that makes the animated series pale in comparison, which I absolutely love!

The art here was fantastic. I’m always fascinated how artists created speech bubbles to emulate the character that is speaking, and I absolutely loved what they did with Gestalt to show how they speak in an electronic-style voice. The panels and compositions were done very well, and my favorite panel was when Gestalt was analyzing Boonma while Terry was speaking with Bruce in his mind. It was such a great work of art to tell the story and the creative use of space to tie in the bigger scene of the story with the microscopic elements that were being identified in her bloodstream.

That said, there were some moments when the art didn’t work for me. There was one splash page where they were trying to use the text masking technique where you see some text in large font size and an image is sitting inside the text like a background image. Usually, that works well but the problem here was that the font didn’t work for it. It took me way too long to figure out that the text was saying “three months later”. I think if they did a different font style or added some more contrast or spacing with the font, it would have been better.

The other moment where the art didn’t work for me was the use of glitches in the title font towards the end of the comics as well. Glitches are always used as a style to create that sense of a future-techno world, and I think it’s been overused here. Again, it made some of the font a little difficult to read (although not as bad as the “three months later” panel), and I think the glitches almost came out of nowhere when we didn’t have anything “glitchy” up to that point. At some point, the glitch style to represent the future-techno world has to be abandoned and not used as a catch-all to emulate the future.

Overall, this was a great story. Although the art had a couple of moments where I felt it struggled, the artwork as a whole was phenomenal. The composition and use of space were really well done, and the story was really fascinating and captivating. I honestly cannot wait to read the previous issues and for the next one to come out!